Today I’m flashing-back to last month in Amsterdam! Yes, I still have pictures that I have to share with y’all. They do no good to me just sitting here on my computers hard drive, so off to the Internet they go. While we were in Amsterdam, there were a few days where JP had to work, so it was Chloe and me against the city! One day we decided to venture out and find the Amsterdam Artis Royal Zoo and I’m so glad that we did! 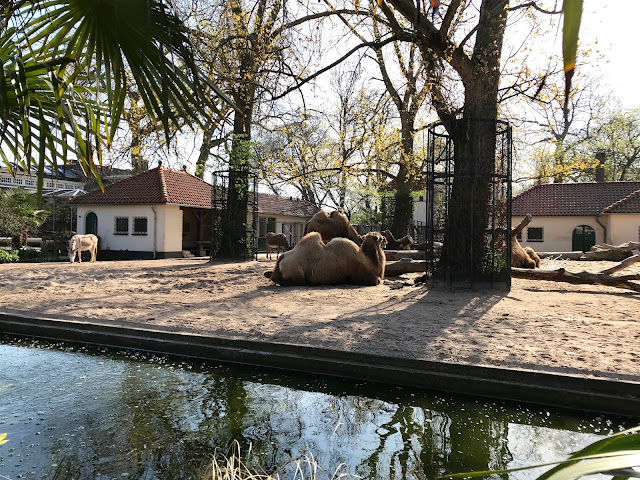 The zoo was walkable from our hotel, so I decided to load the directions on Google maps and head that way as soon as we were up and moving. It was the perfect zoo day and we were hoping the animals would be out and in action. Spoiler alert: They did NOT disappoint! 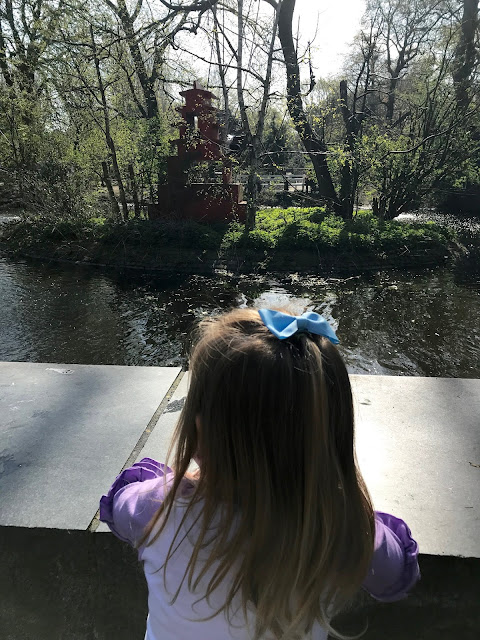 For starters, Chloe and I LOVE the zoo. We have a zoo membership at home and try to go as often as we can. I saw reviews that the Artis Zoo in Amsterdam was a good one, so we had to check it out. 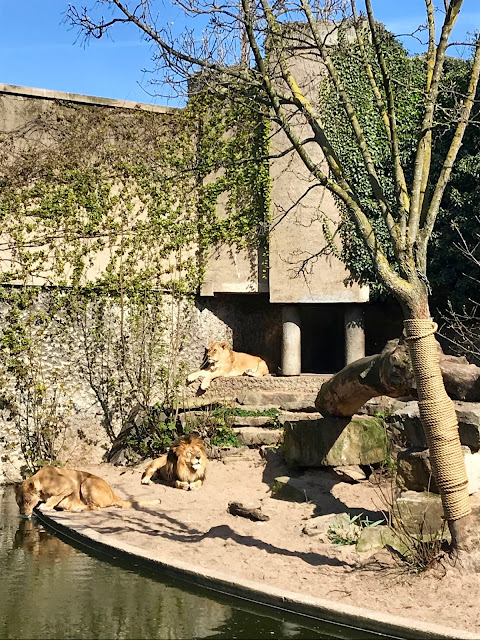 It did NOT disappoint! We happened to chose a gorgeous day with highs in the low 70’s and not a cloud in the sky. The animals were not only out, but they were active and some were so engaging! 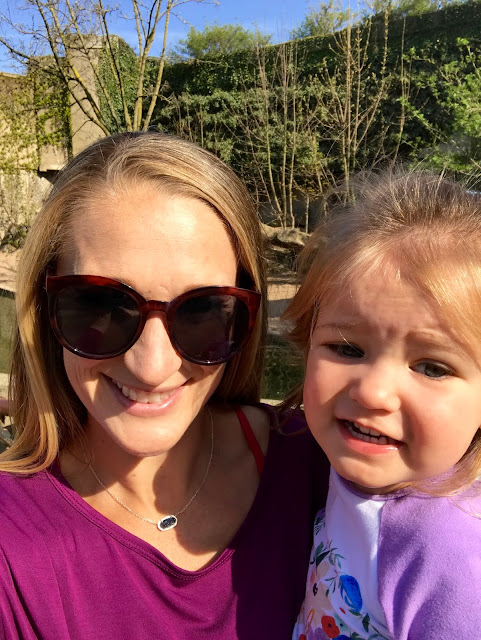 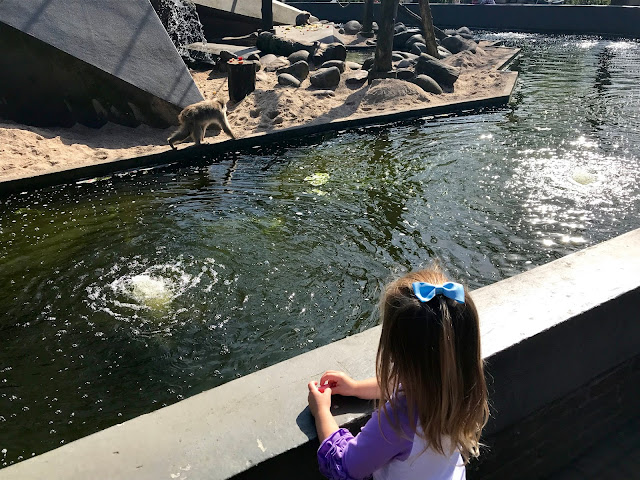 The monkeys were busy eating all of their snacks which Chloe thought was absolutely hilarious. I was able to tell her that monkeys need to eat lots of snacks just like Chloe! She scoffed when I told her they ate their vegetables. She still won’t eat any unless I sneak it in her smoothie! 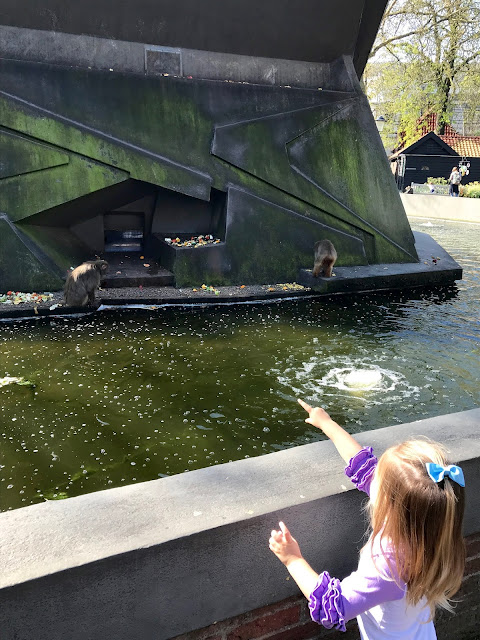 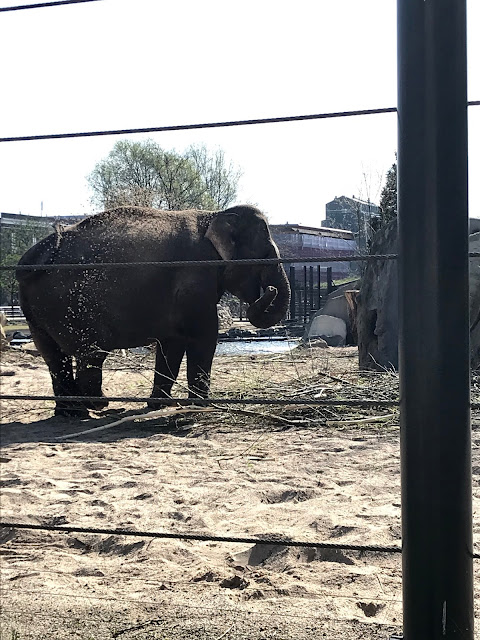 The elephants were by far our FAVORITES! First of all, the elephant exhibit was huge. They had a really neat area that you could walk all around and even through. 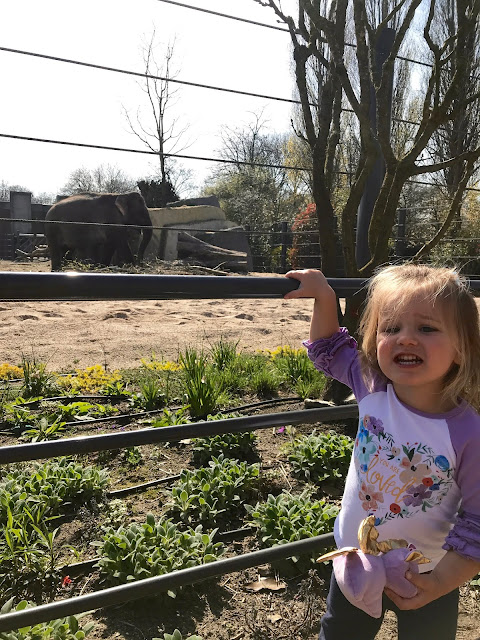 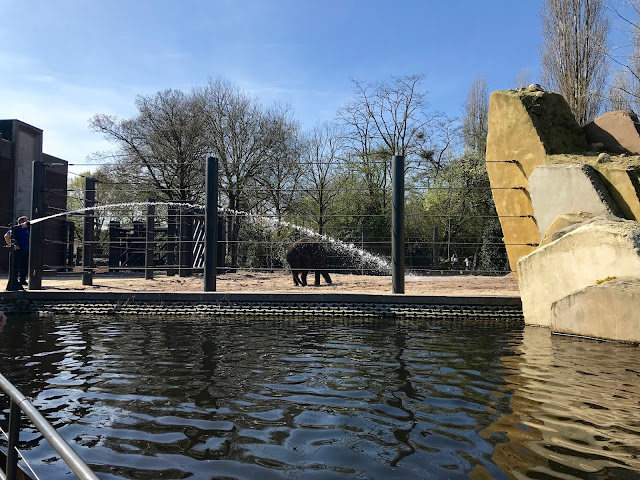 The exhibit has a big water feature with a walkway along it that dips down to water level. It allows you to see the elephants from a totally different angle. We stumbled upon it right as they started playing with the baby elephant! She was so cute and playful and just 6 months old. We stood and watched for at least 15 minutes. They were playing with the water and a ball before moving to the pool. 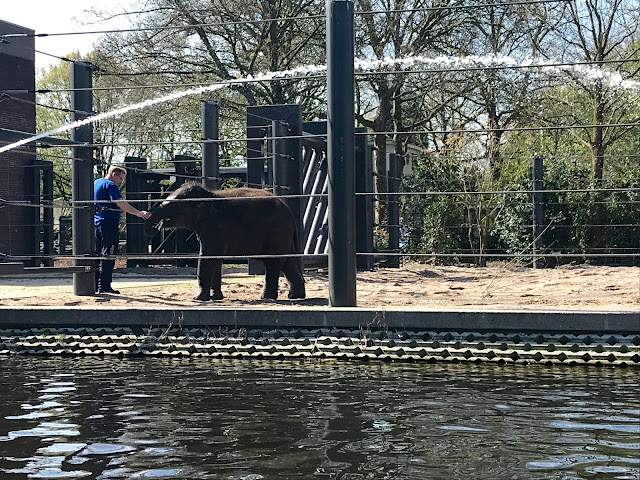 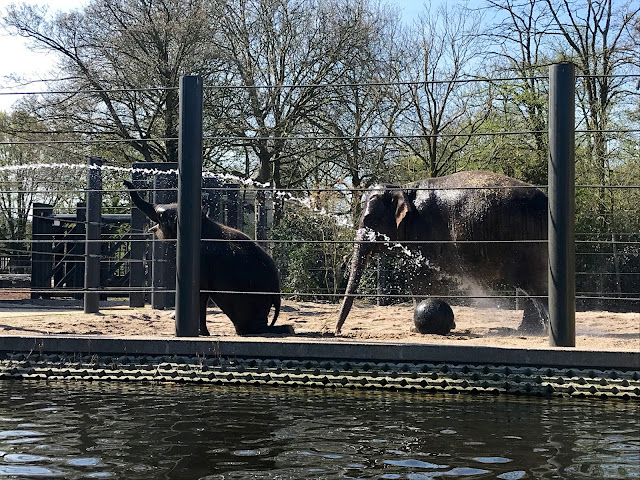 Chloe and I were both mesmerized. They were so sweet to watch and we even went back again before we left because Chloe loves elephants so much. 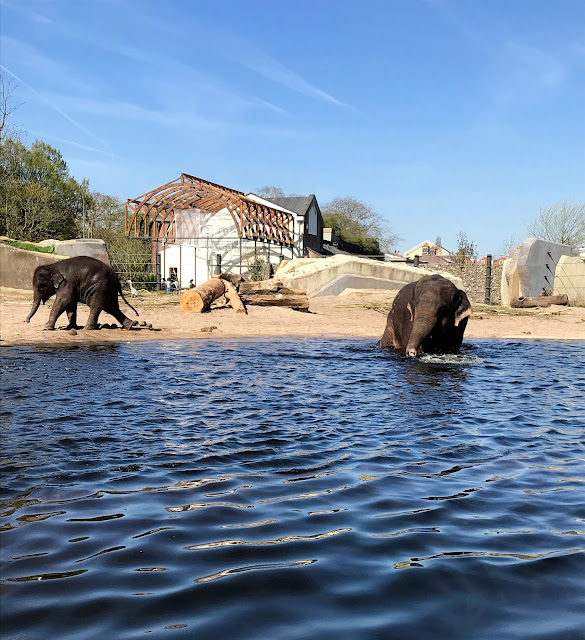 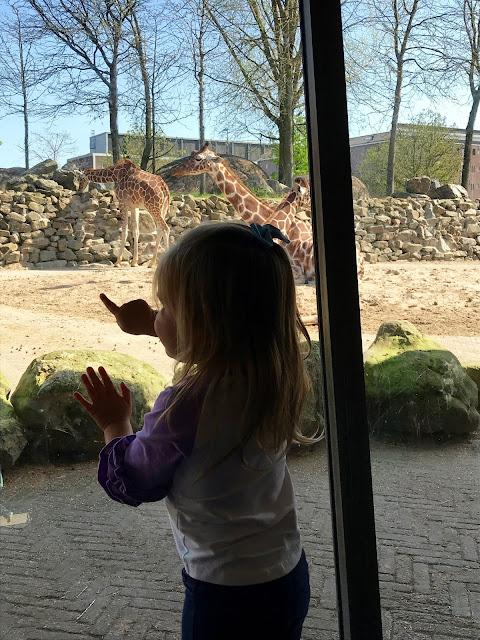 The giraffes were also a big hit! They had several viewing areas too. You could see them from the backside of the exhibit or behind the glass up close and personal from the front. They happened to get snacks right as we showed up, so all of them were right by the glass enclosure.

Just next door there was a smaller giraffe area and we saw a baby giraffe! He was only 5 days old!!! He was still super wobbly and unsure that his legs would stay beneath him. 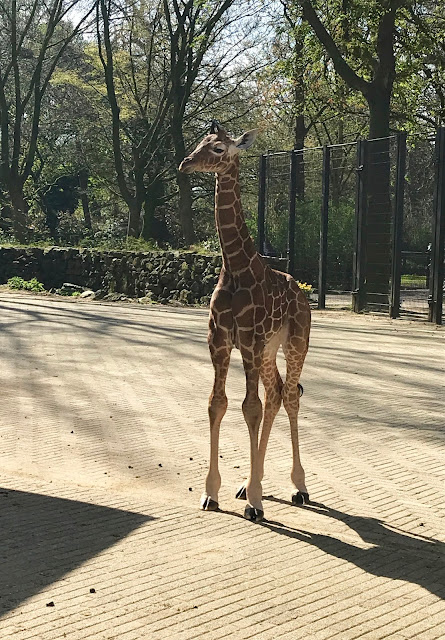 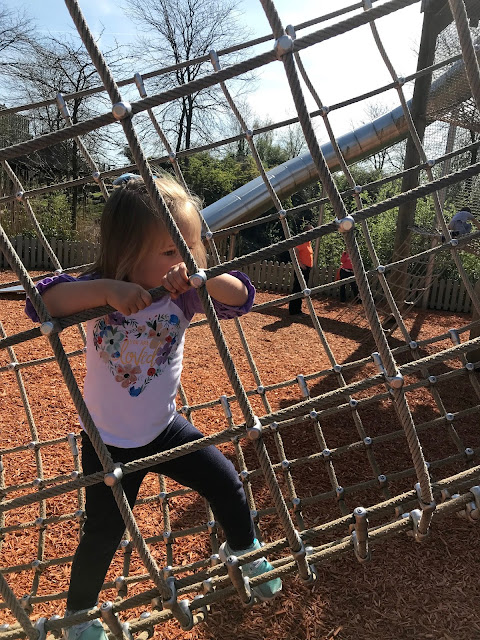 One of the best parts about this zoo were the playgrounds scattered throughout. The large play area was right outside the main restaurant and was a huge hit with the kiddos. Of course the little kid area wasn’t enough for Chloe. She wanted to climb up the big ladder. It was kind of shocking since my little girl is quite the timid one. She insisted though. She was nervous the whole way up, but did it all by herself! Then she got to the top and panicked. She was too scared to go down the slide. Luckily a sweet momma went down with Chloe and her son so that I wouldn’t have to climb up to get her! 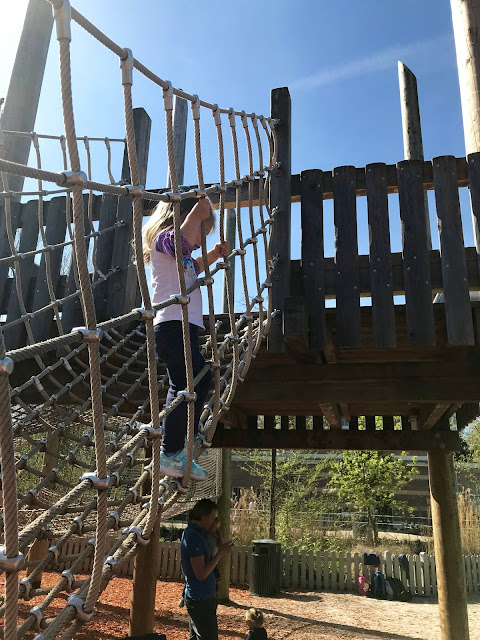 So many animals that we don’t have at our home zoo! 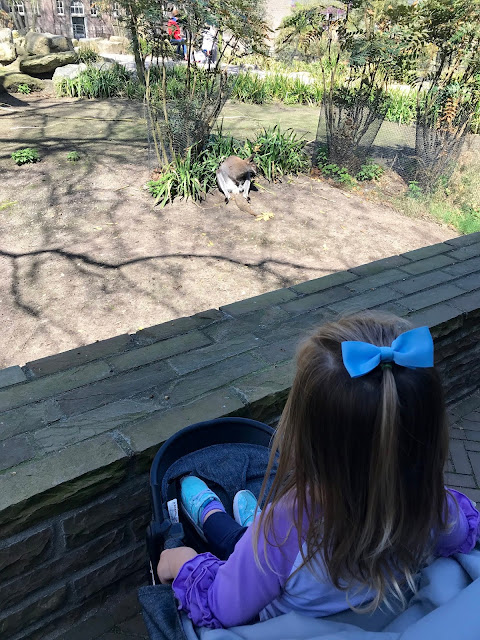 Look it’s a wallaby! We were actually able to walk through this enclosure! There were a few animal enclosures that you could walk through and get closer to the animals. The wallabies and lemurs were a few that I remember.

I love seeing animals that we don’t have in our zoo at home. Some we saw were the wallabies, a camel and penguins! The little penguin below wanted to come play with us. 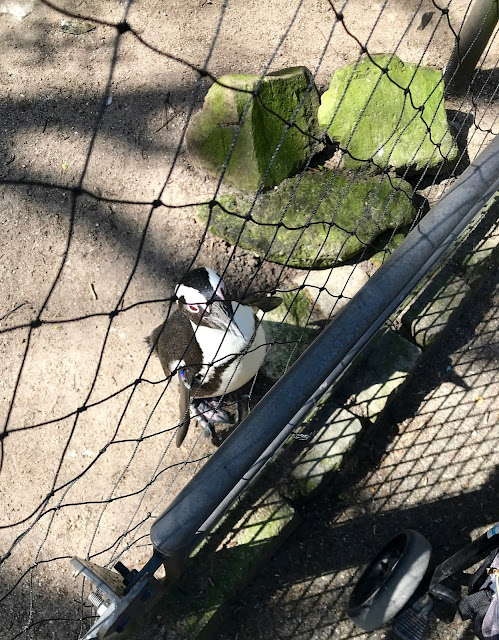 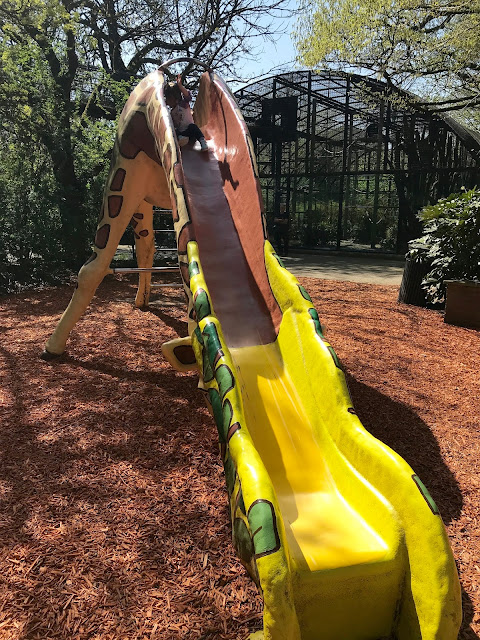 Like I said, tons of play areas throughout the park and you know we had to stop at every single one. I was okay with that. Burn all the energy Chlo! 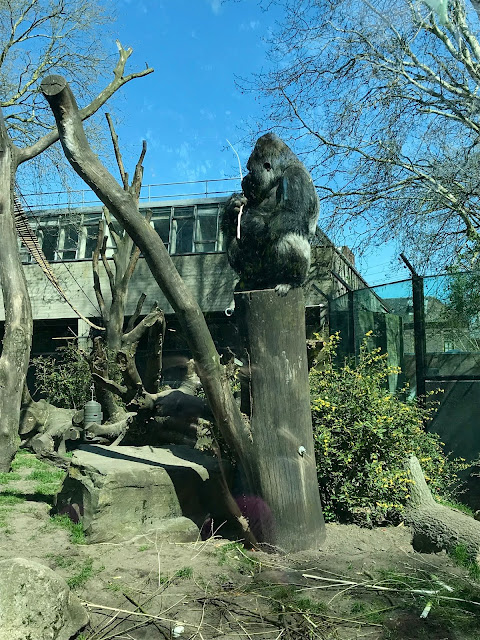 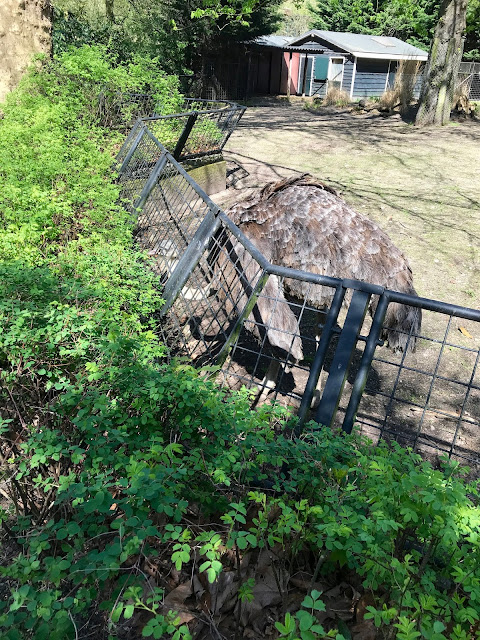 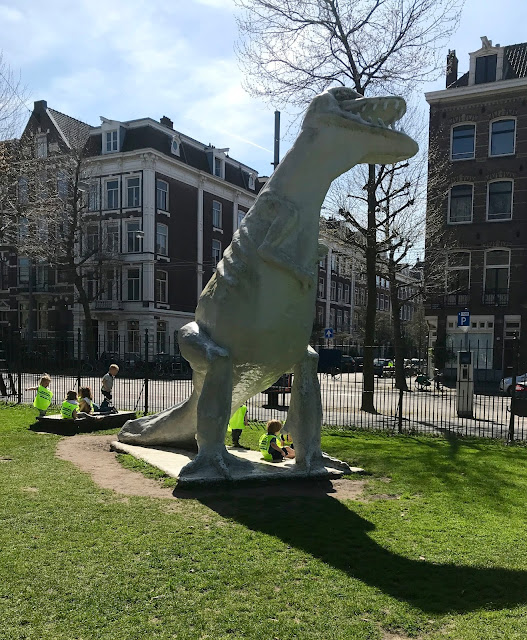 Another play area was just a large green space with benches, flowers and two huge dinosaurs! An Allosaurus and a Stegosaurus!  Chloe took the time to stop and smell the flowers before attempting to climb the Stegosaurus’s back. She’s not the most coordinated, so she didn’t get too far. 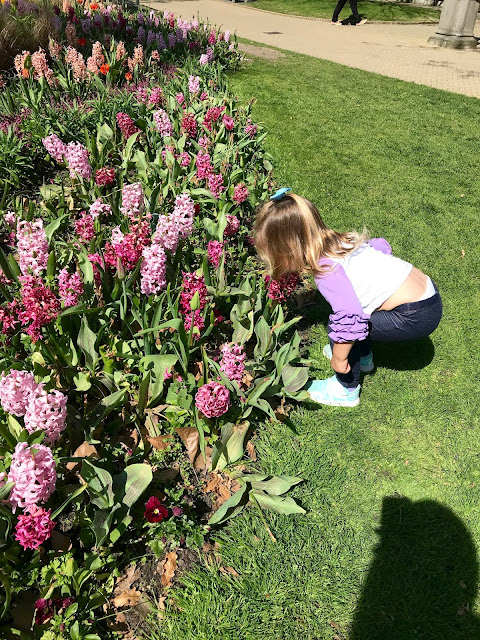 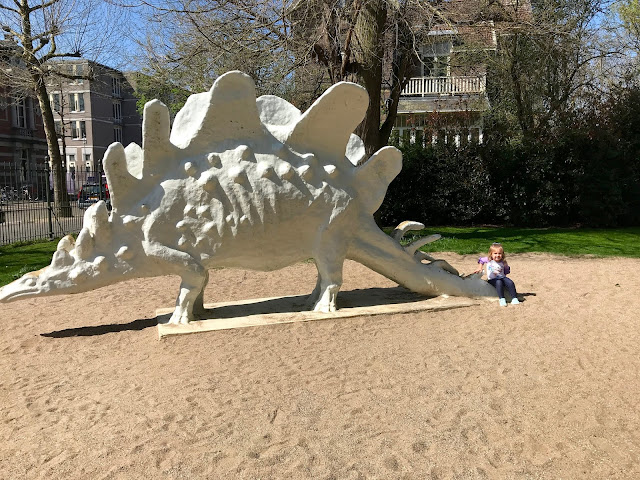 This area was one of the last that we found right over by the aquarium. I enjoyed getting a moment to sit down while Chloe ran around just a bit more because after that we were headed back to our hotel. Of course it was about a mile and a half away and I had been on my feet for about 5 hours. 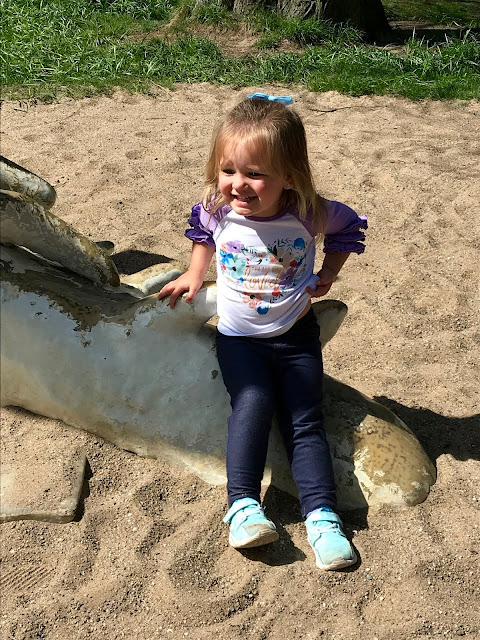 One of my favorite things about traveling with Chloe is that we seem to find things and visit places that we wouldn’t have gone if she wasn’t with us. JP and I wouldn’t have gone to the zoo, but I’m so glad we got to experience this. It was so neat and one of my favorite zoo’s that I’ve ever visited! Since it was just the two of us and we had no schedule at all, we took our time, revisited our favorite animals, ate a picnic lunch, played at every park we could and even bought popsicles since Chloe was such a good girl!

If you’re in Amsterdam with kids or if you have a spare day and aren’t quite sure what to do, I highly recommend the Amsterdam Artis Royal Zoo. It’s a beautiful zoo with lots of unique features and animals. I would go back in a heartbeat.

I hope you enjoyed taking a look inside a travel day with just little Chlo and me! 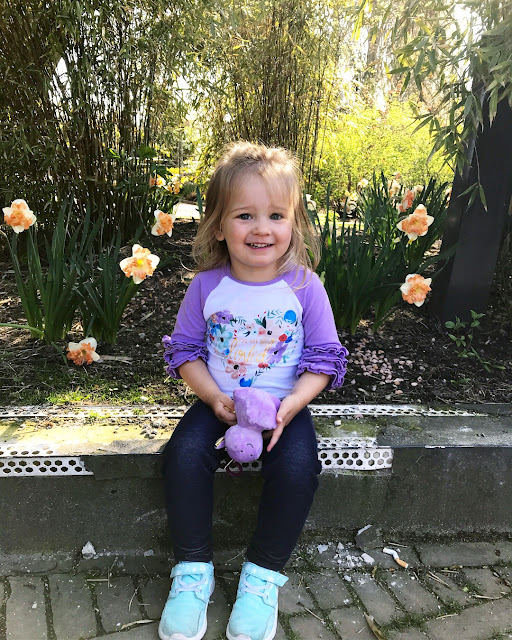 Check out some of our other Amsterdam adventures: iAmsterdam | Markets in Amsterdam | Keukenhof Gardens | The Hague & Leiden

This website uses cookies to improve your experience while you navigate through the website. Out of these, the cookies that are categorized as necessary are stored on your browser as they are essential for the working of basic functionalities of the website. We also use third-party cookies that help us analyze and understand how you use this website. These cookies will be stored in your browser only with your consent. You also have the option to opt-out of these cookies. But opting out of some of these cookies may affect your browsing experience.
Necessary Always Enabled
Necessary cookies are absolutely essential for the website to function properly. These cookies ensure basic functionalities and security features of the website, anonymously.
Functional
Functional cookies help to perform certain functionalities like sharing the content of the website on social media platforms, collect feedbacks, and other third-party features.
Performance
Performance cookies are used to understand and analyze the key performance indexes of the website which helps in delivering a better user experience for the visitors.
Analytics
Analytical cookies are used to understand how visitors interact with the website. These cookies help provide information on metrics the number of visitors, bounce rate, traffic source, etc.
Advertisement
Advertisement cookies are used to provide visitors with relevant ads and marketing campaigns. These cookies track visitors across websites and collect information to provide customized ads.
Others
Other uncategorized cookies are those that are being analyzed and have not been classified into a category as yet.
SAVE & ACCEPT
9 shares