Hello friends! I’m back with my next post about our adventures in Amsterdam! Since we spent about 9 days in Amsterdam, we had a lot of time to wander around the city exploring all the different parts. One of my favorite things to do when traveling is check out the open air markets! The markets in Amsterdam are unique in so many different ways. I mean, one is floating! You can always find really unique things, fun touristy trinkets, fresh food and yummy snacks. 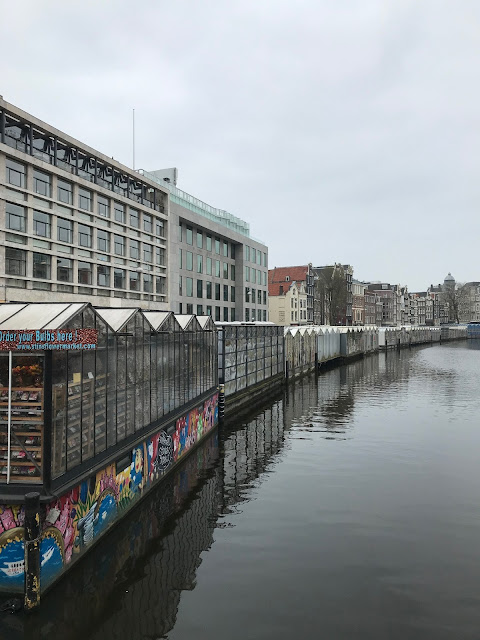 This is the only floating flower market in the world! The shops all sit along houseboats on the canal as you can see above. It’s open all year and during the week unlike many markets that are only open on the weekends. 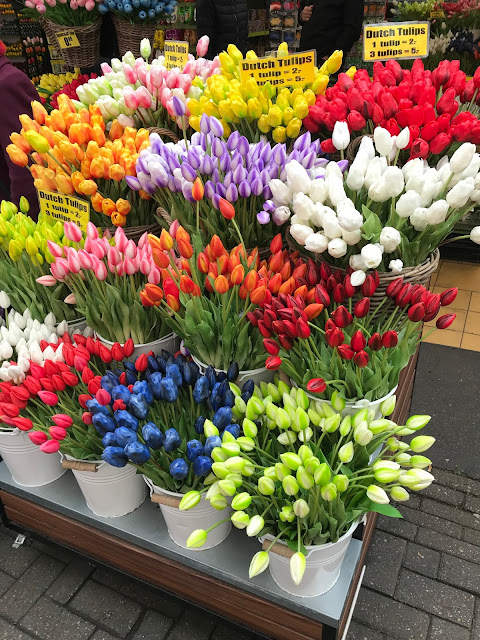 During the Christmas season, the market sells all different types of Christmas trees! There is also a permanent Christmas store in the market which I naturally loved. We even picked up a delftware like windmill ornament to add to our travel tree this year. 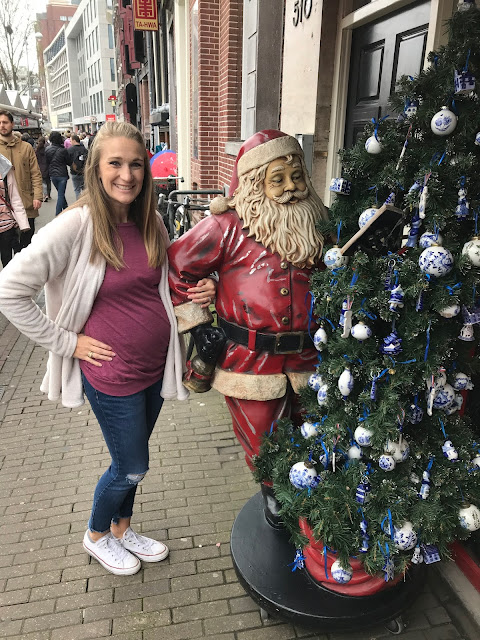 Those of you that don’t know, my maiden name is Timmer which is Dutch! I found this shop and got so excited that I had to take a picture. Then of course I realized that it said no photos. I told the guy that I had to take it because Timmer was my name and he was really cool about it! 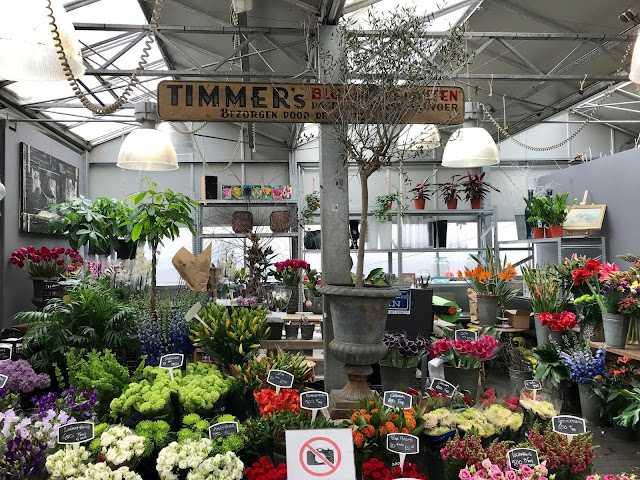 The flower market was a fun adventure and a colorful blip in Amsterdam. Not that Amsterdam is drab, it’s just not the most colorful city especially when it’s overcast. This market is a great place to pick up souvenirs for your family while you’re visiting. They have tons of options. Just make sure to check prices as you go along the market because some shops charge more than others. Chloe was super excited that we bought her some of her own wooden tulips since we won’t let her play with the ones that we have at home! 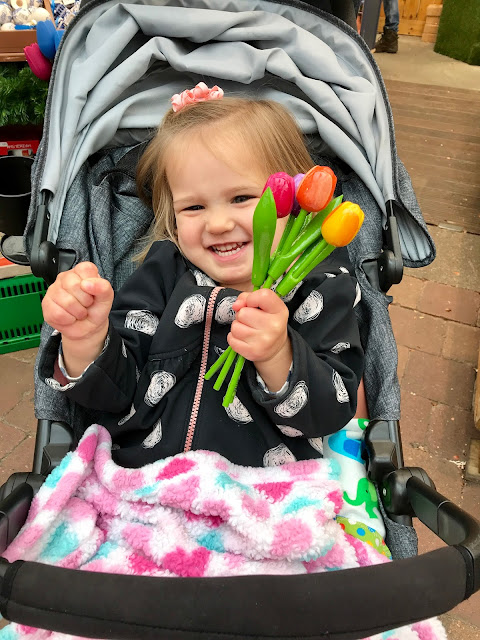 This was possibly my favorite market that we visited! We got most of our trinkets here. Since we went first thing in the morning it was barely crowded at all. We went on a Saturday morning probably around 9:30-10:00am. Definitely early for the Amsterdam crowd, but it worked in our favor. 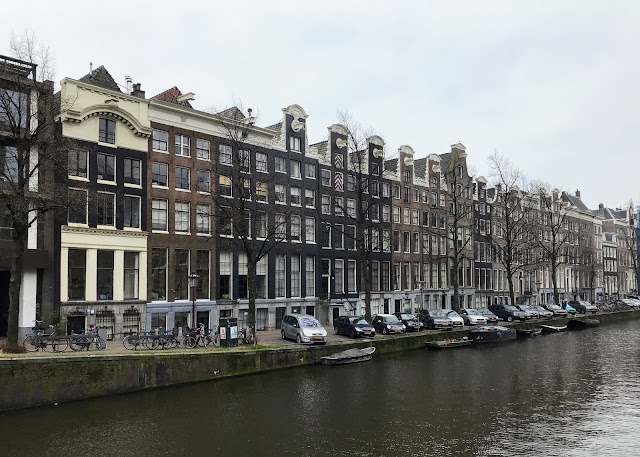 This is a street market in Amsterdam that came highly recommended to me! Fun fact that I learned: it started as several carts selling things along the street and continued to grow. In 1905, it became an official market that was open on Saturdays only. In 1912, it became a daytime market open 6 days a week! 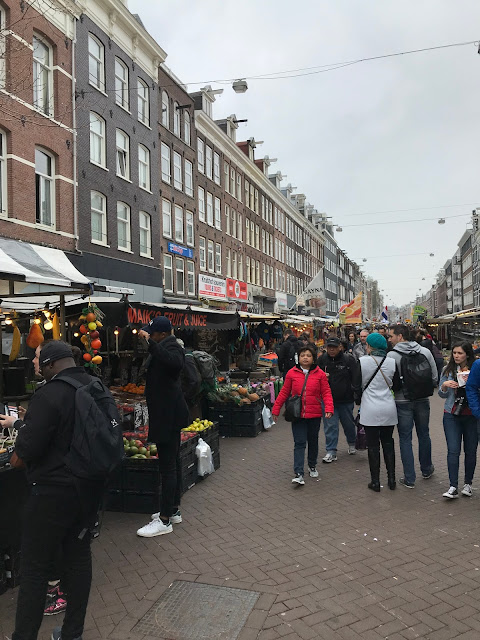 This market had tons of unique stalls! It’s a very multicultural marketplace with a variety of foods, trinkets, random stuff and clothing. There were fresh squeezed juice, cheese, fruits, vegetables, fish and meat stands. Clothing stalls with a variety of things from plain t-shirts to naughty outfits to boutique clothes. And tons of places to pick up souvenirs. 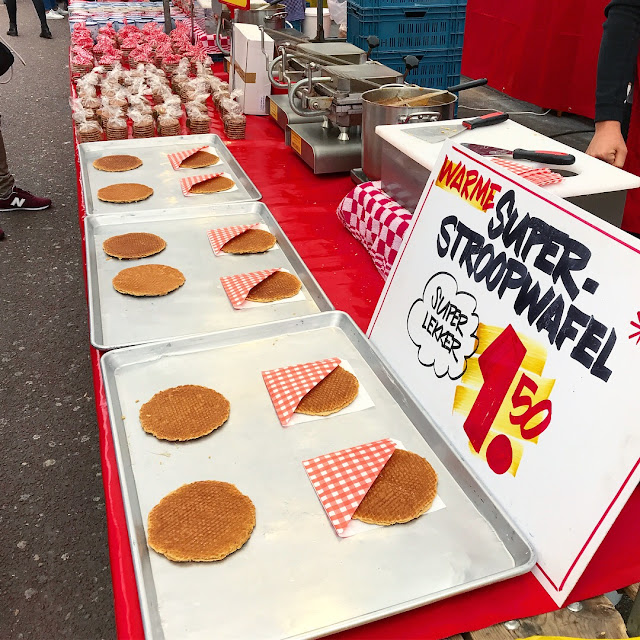 If you haven’t had a Stroopwafel, then you’re missing out. These are one of Holland’s delicacies! They’re super simple. Thin waffles cut in two when they’re fresh off the waffle iron with a delicious caramel substance in between. They’re delicious and even better when you watch them make your and eat it immediately afterwards. 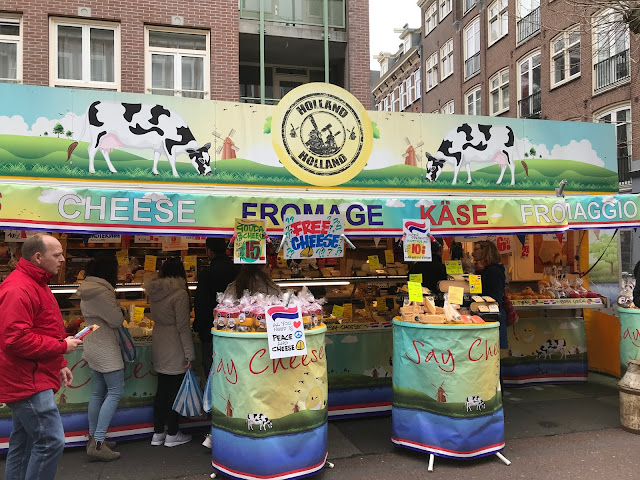 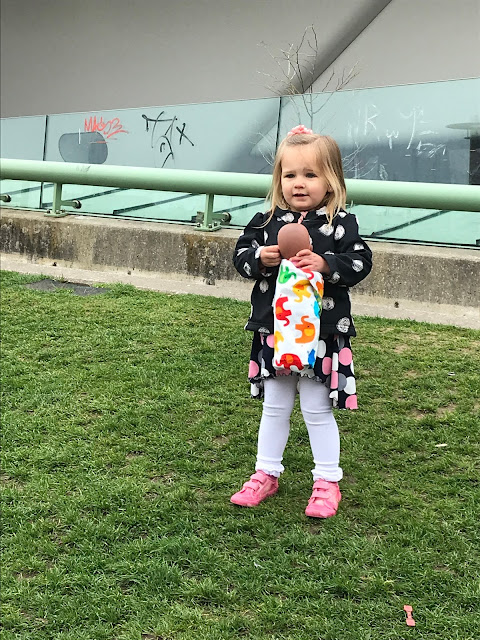 We stumbled upon this market because we had no idea it was happening. That’s another awesome thing about markets in Amsterdam, there are so many that you can literally stumble upon them! On Sunday, we decided to go to the Rijksmuseum and this awesome market was set up along the fountain, lawn and walkways. Apparently it is only open on the third Sunday of the month! What are the odds that we would be there for it and just stumble upon it!

I didn’t get too many pictures of it because it was drizzling and very cold. Also we were on our way to the museum, so we explored both before and after we went in! 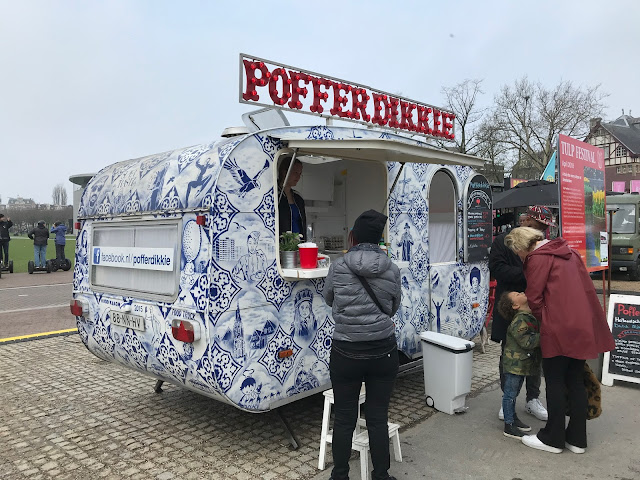 There were tons of food trucks that sold every type of food that you can think of! The food truck above was my favorite one. It sold the delicious little Dutch pancakes, but the truck itself was adorable. It was decorated with a delftware style print, and it just looked beautiful.

After we visited the museum, I was starving since it was past lunchtime. We decided to get some Indian food from a truck called Curry Up! It was so good and totally hit the spot. 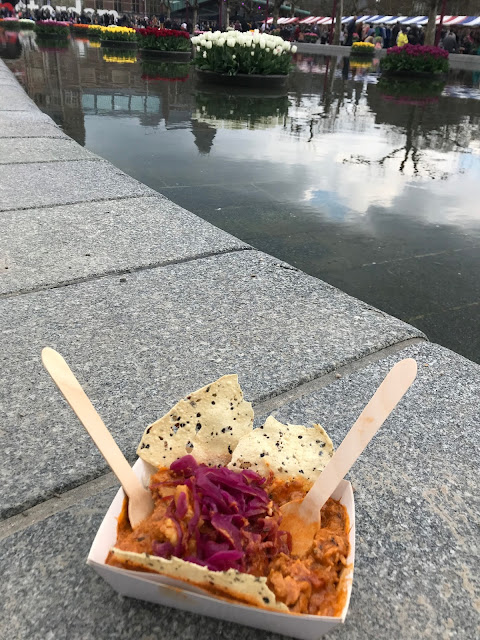 We wandered the market and thought about buying several things. This market was more of a handmade type market! I almost got a crocheted teddy bear for the baby’s room, but decided against it. However, I did end up getting a laser etched wooden spiral notebook! It has a world on the front and says “Travel the World” and I’m using it as a place to take notes on our adventures. Hopefully I can then relay those notes to this space, so I’ll remember everything forever! Or at least as long as the Internet exists. 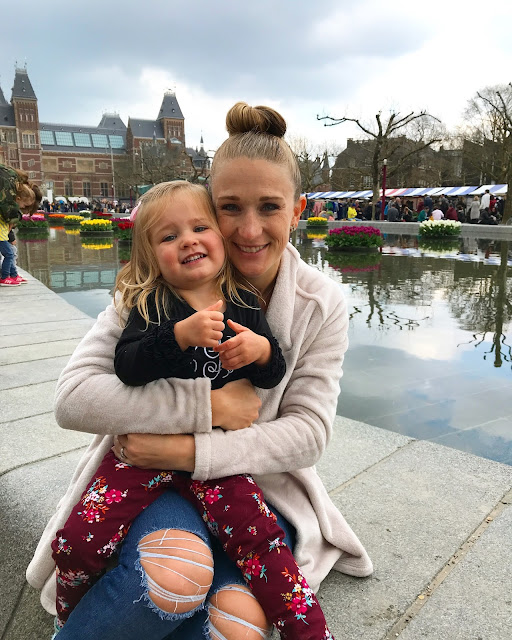 Chloe and I also stumbled upon the Waterlooplein Market after we adventured to an indoor kids playland. This market is the oldest flea market in Amsterdam. We picked up a snack here since it was on our way back home, but we didn’t really shop around since it was nap time. I did read that they have some amazing leather and vintage goods!

Now I’m just going to hang out at home and dream of all the fun, unique things we were able to do while traveling. I’ll admit, it does feel good to be sitting on my couch right now though!

Do you like to explore markets when traveling?
Which ones are your favorites? We went to the Portobello Market in London 3 years ago and it was amazing!

Don’t forget to check out our other Amsterdam posts: i amsterdam | Keukenhof Gardens | 22 week bump around Amsterdam This website uses cookies to improve your experience while you navigate through the website. Out of these, the cookies that are categorized as necessary are stored on your browser as they are essential for the working of basic functionalities of the website. We also use third-party cookies that help us analyze and understand how you use this website. These cookies will be stored in your browser only with your consent. You also have the option to opt-out of these cookies. But opting out of some of these cookies may affect your browsing experience.
Necessary Always Enabled
Necessary cookies are absolutely essential for the website to function properly. These cookies ensure basic functionalities and security features of the website, anonymously.
Functional
Functional cookies help to perform certain functionalities like sharing the content of the website on social media platforms, collect feedbacks, and other third-party features.
Performance
Performance cookies are used to understand and analyze the key performance indexes of the website which helps in delivering a better user experience for the visitors.
Analytics
Analytical cookies are used to understand how visitors interact with the website. These cookies help provide information on metrics the number of visitors, bounce rate, traffic source, etc.
Advertisement
Advertisement cookies are used to provide visitors with relevant ads and marketing campaigns. These cookies track visitors across websites and collect information to provide customized ads.
Others
Other uncategorized cookies are those that are being analyzed and have not been classified into a category as yet.
SAVE & ACCEPT
7 shares