Happy Fitness Friday my lovelies! I’m so thankful for my short week, I’m not sure I would have survived without it! I’m still in full on Disney mode and unfortunately, I’m not at Disney World anymore. I’ll just continue reliving it by sharing pictures and stories with y’all! Today is the Fit for a Princess Expo and the Disney Princess Half Marathon recap! 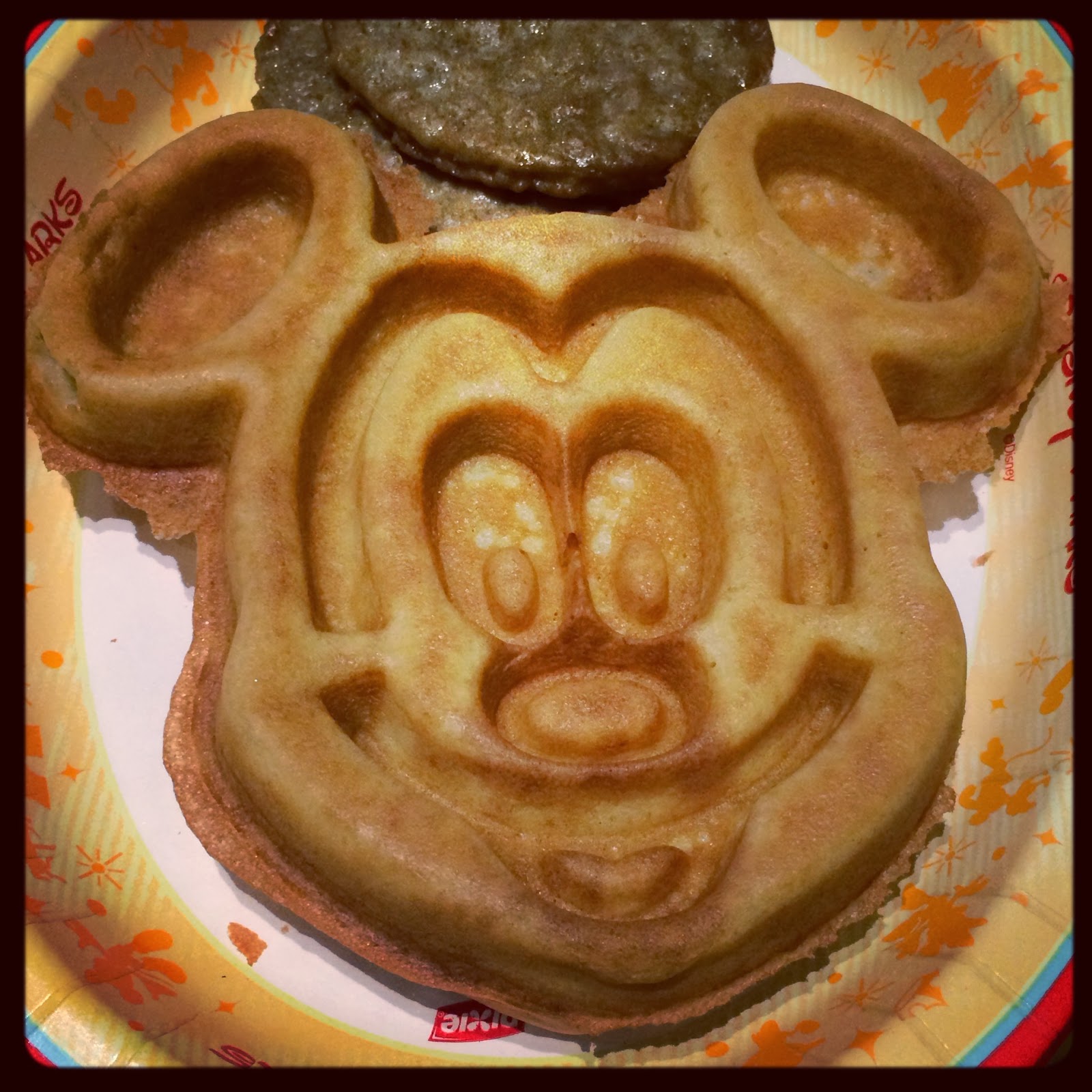 This year, the expo was back at The Wide World of Sports. Thank Goodness! Last year it was at Coronado Springs and let’s just say that it was a cluster! This year was way better. You picked your bib up and snapped a few pictures in one location… 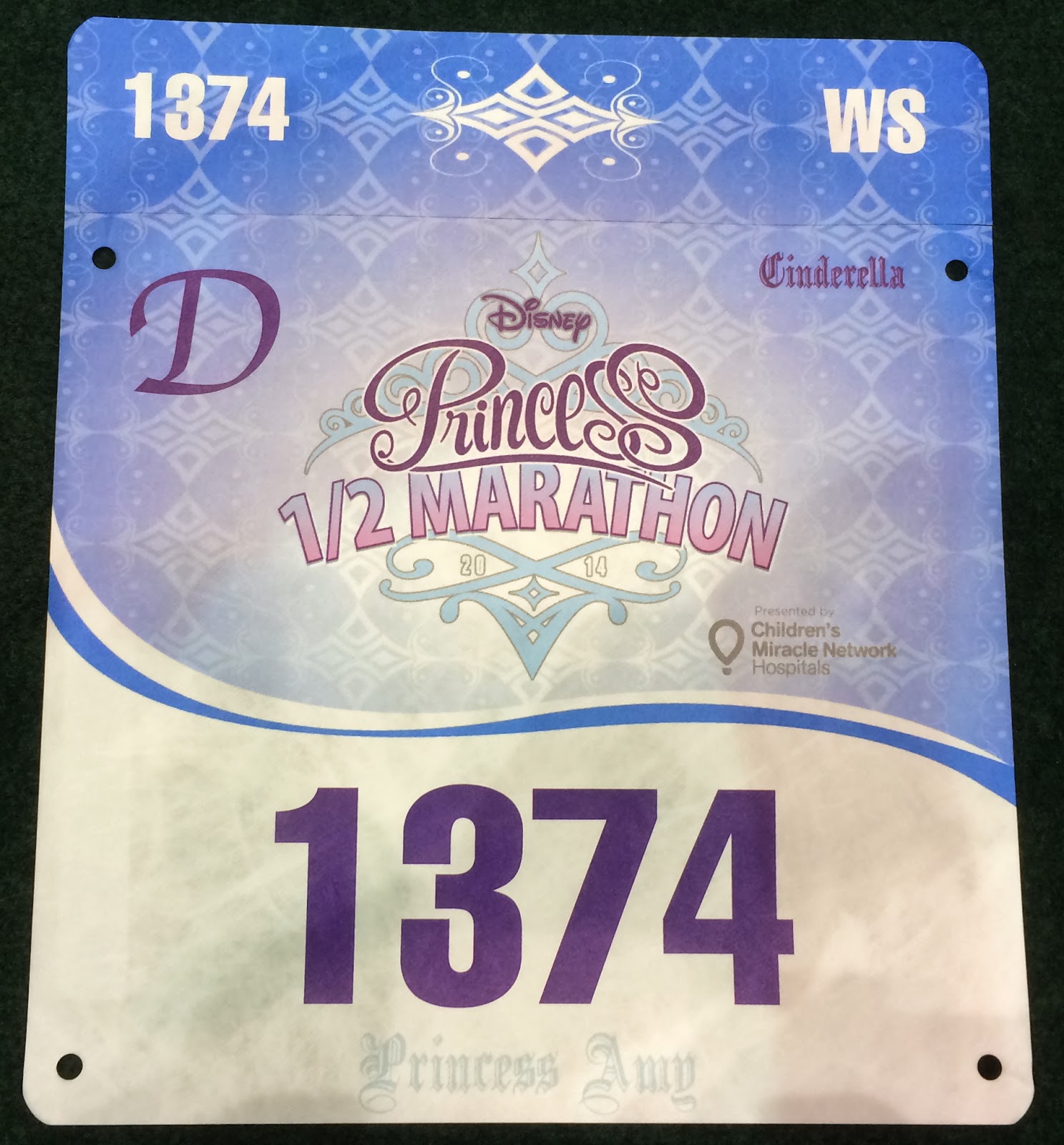 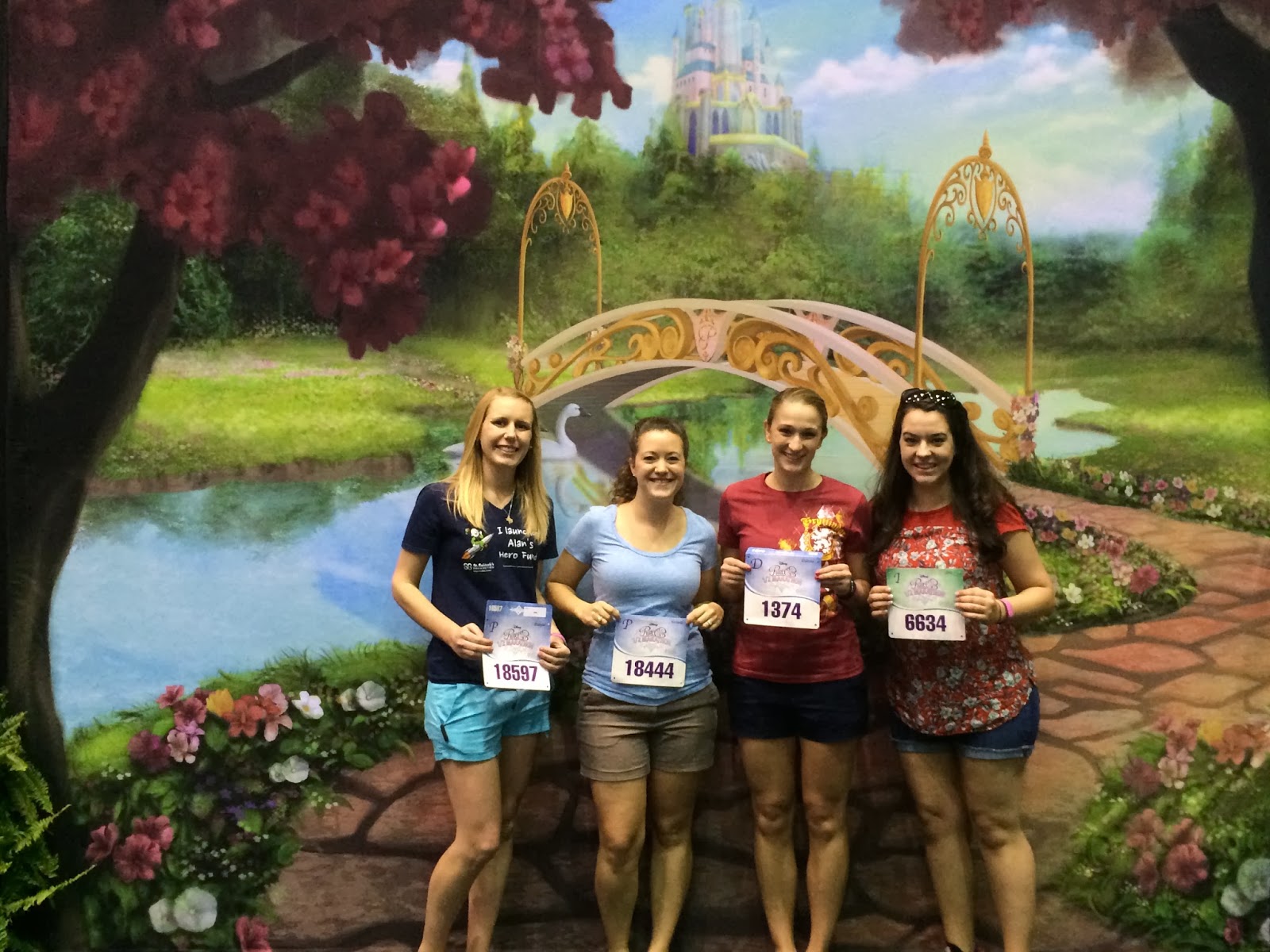 …before heading into the larger area for shirt pick up and the expo itself! And of course we had to grab a picture with Cinderella’s mice turn men! 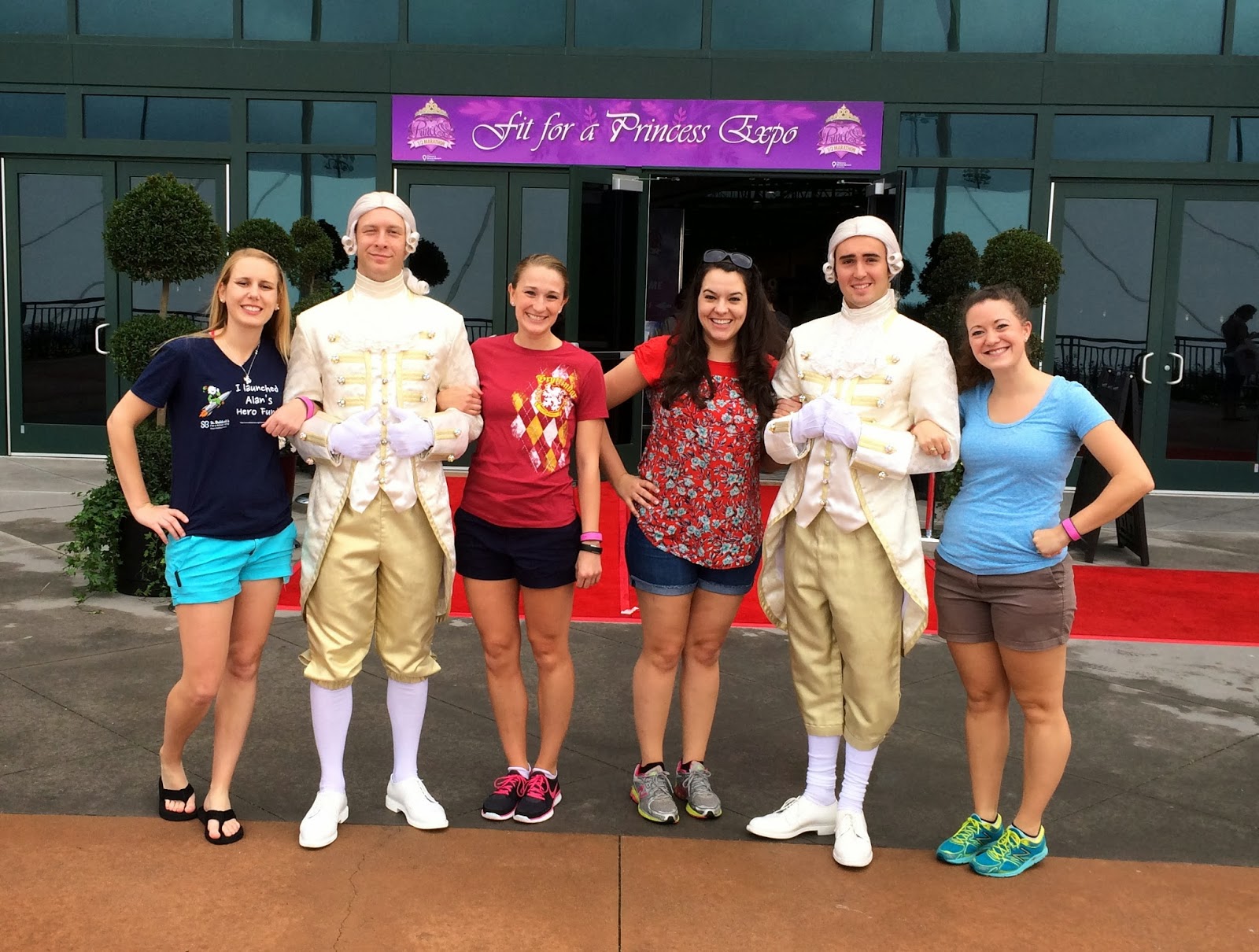 The expo was laid out great and wasn’t overly crowded. Like last year, we got there shortly after it opened for the day. This year it didn’t take over 20 minutes to get our t-shirts. Instead, there wasn’t even a line! The expo wasn’t overly crowded and we did a bit of browsing, but didn’t stay long since we were off to Universal! 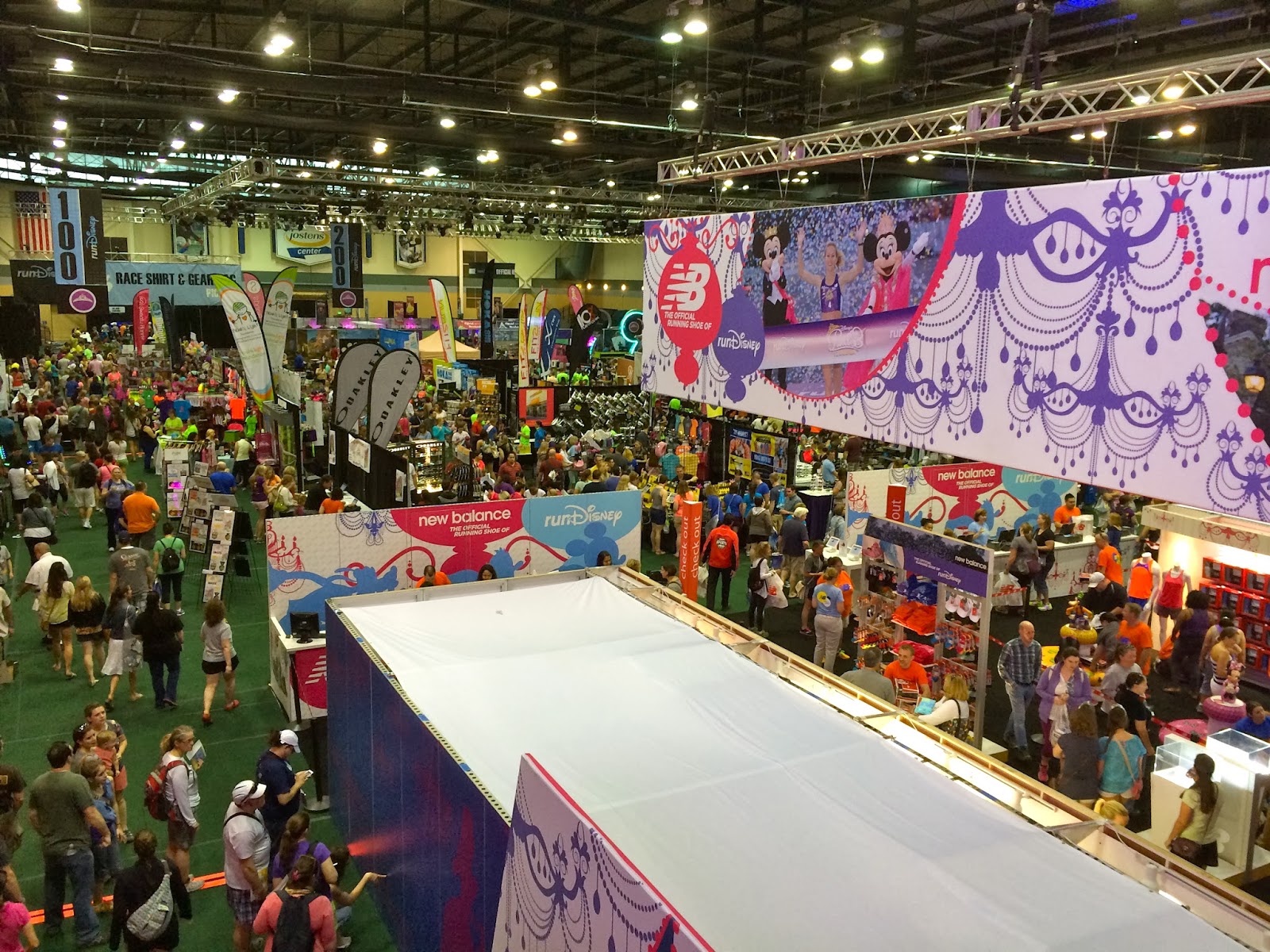 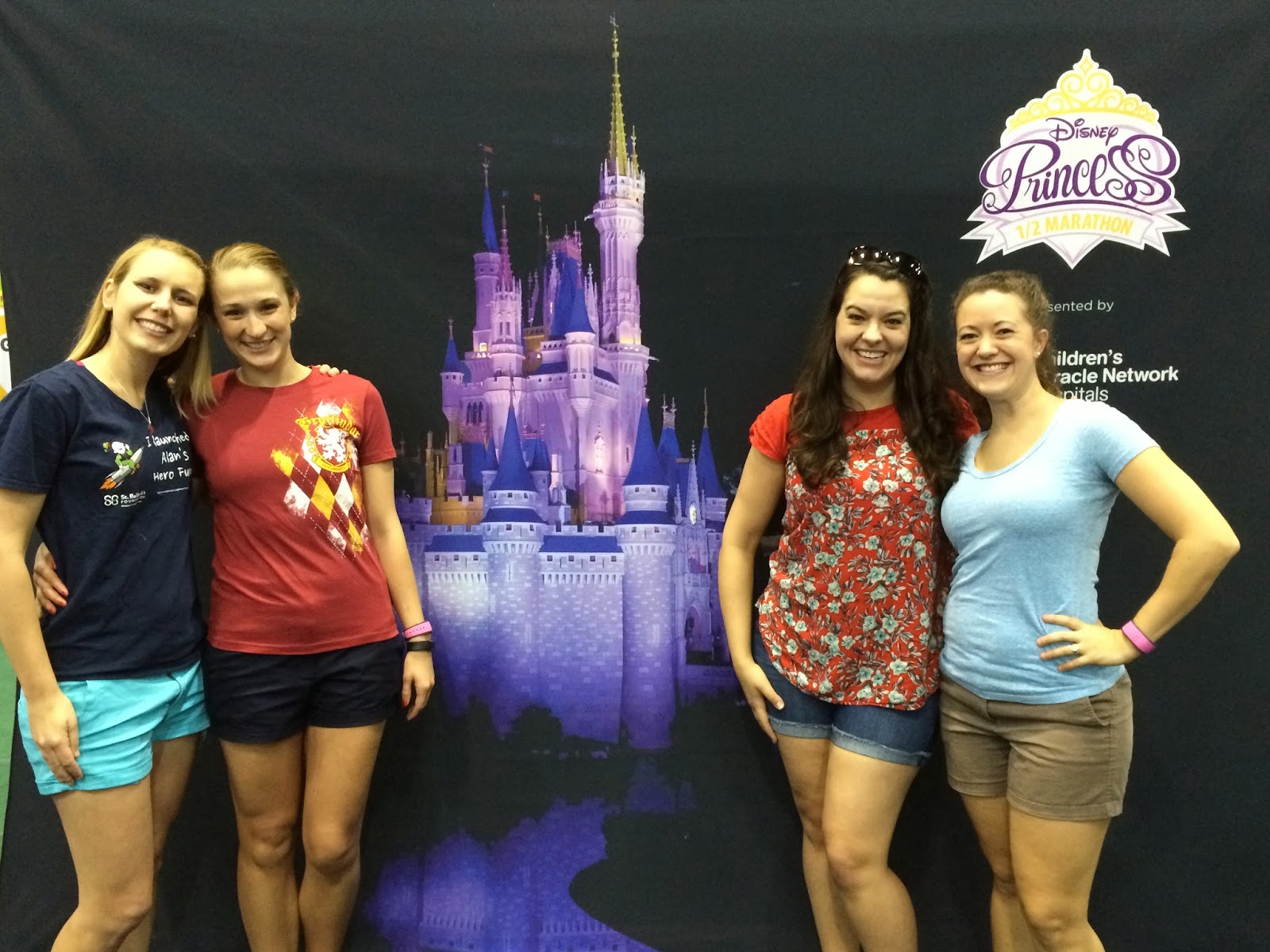 Our alarm clocks went off dark and early at 2:45am. I mean, some people don’t go to bed until that time after going out on a Saturday night. We quickly put on our tutus and attempted to look like we didn’t just roll out of bed. 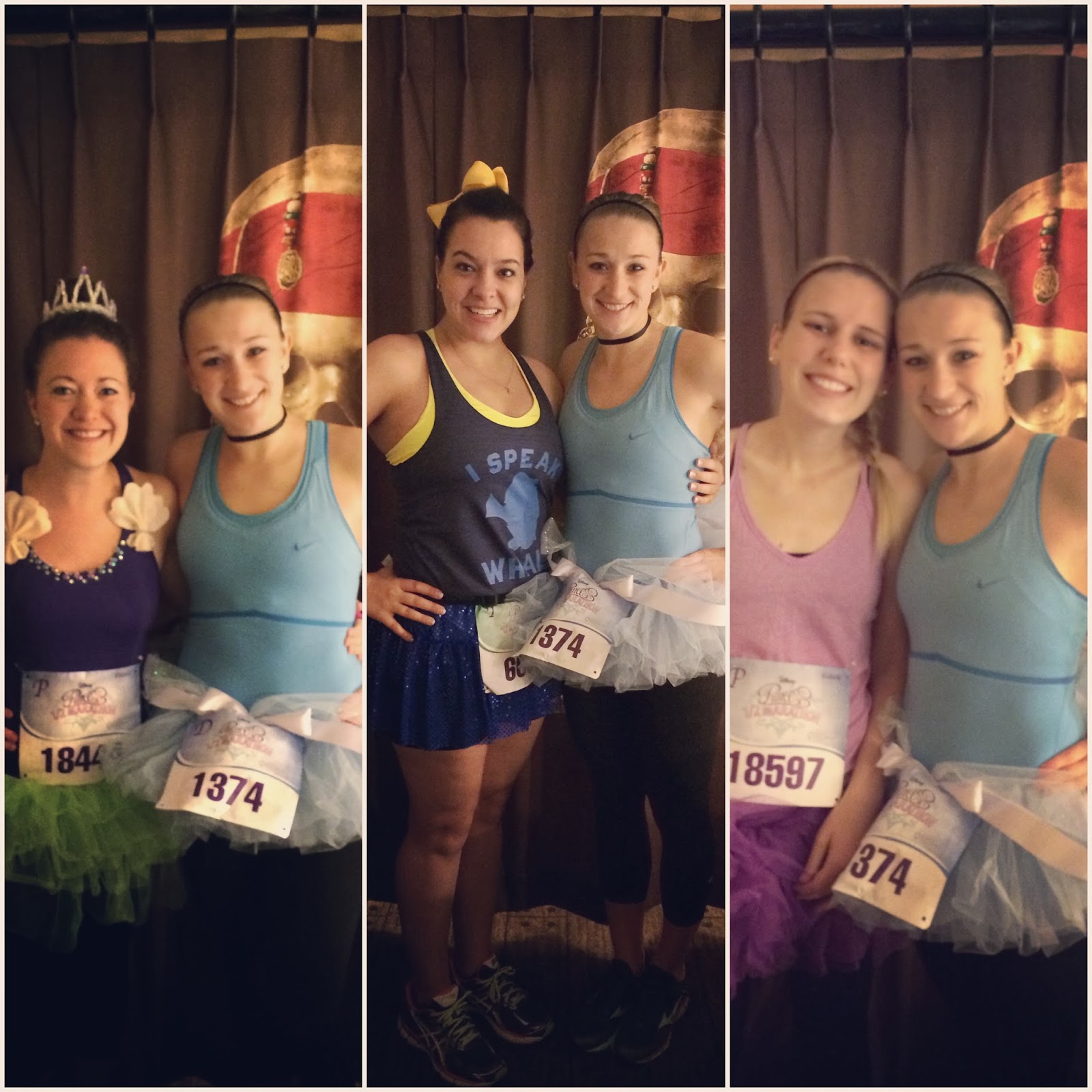 By 3:30am, we were out the door and hopping on a bus to take us to Epcot. After a quick picture, Alison left to meet up with a friend from her running club while Ashley, Julie and I made the trek from Epcot {which is where the finish is} over to the start line. It’s about a 15 minute walk and gives you time to get excited and a little warmed up if you ask me! Unfortunately, we were all in different corrals, so after our stroll we split ways. {Note: if you do not sign up before December 1st, you are put in the last corral which is no fun if you’re faster than that!} 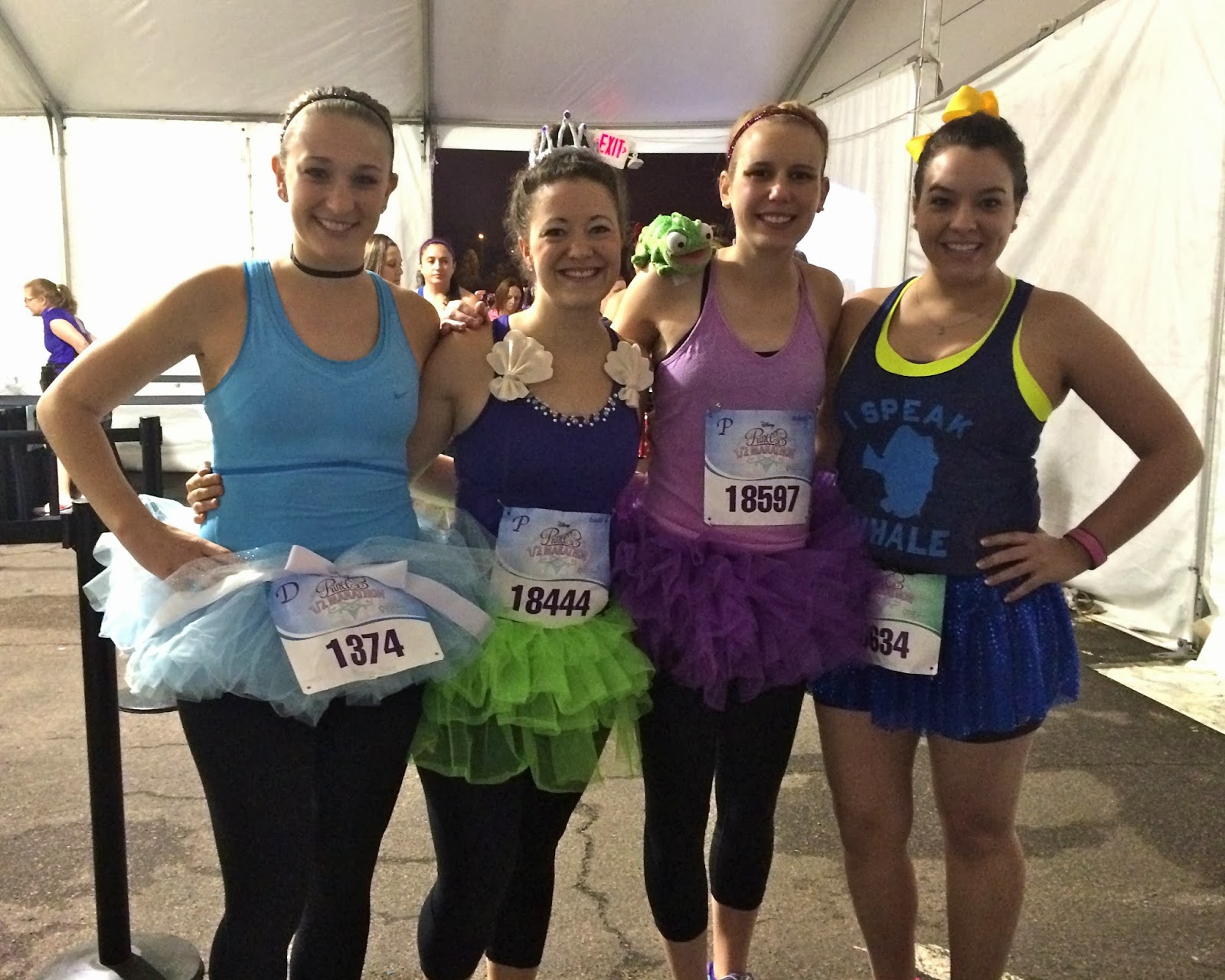 I was up in Corral D while Ali was in I and Julie & Ashley were in P…aka the last corral. They signed up too late to provide proof of time! Julie got in through raising money for Children’s Miracle Network and Ashley got her entry via a travel agent! Bummer for them since they can both finish in 2:30-2:40 easily! 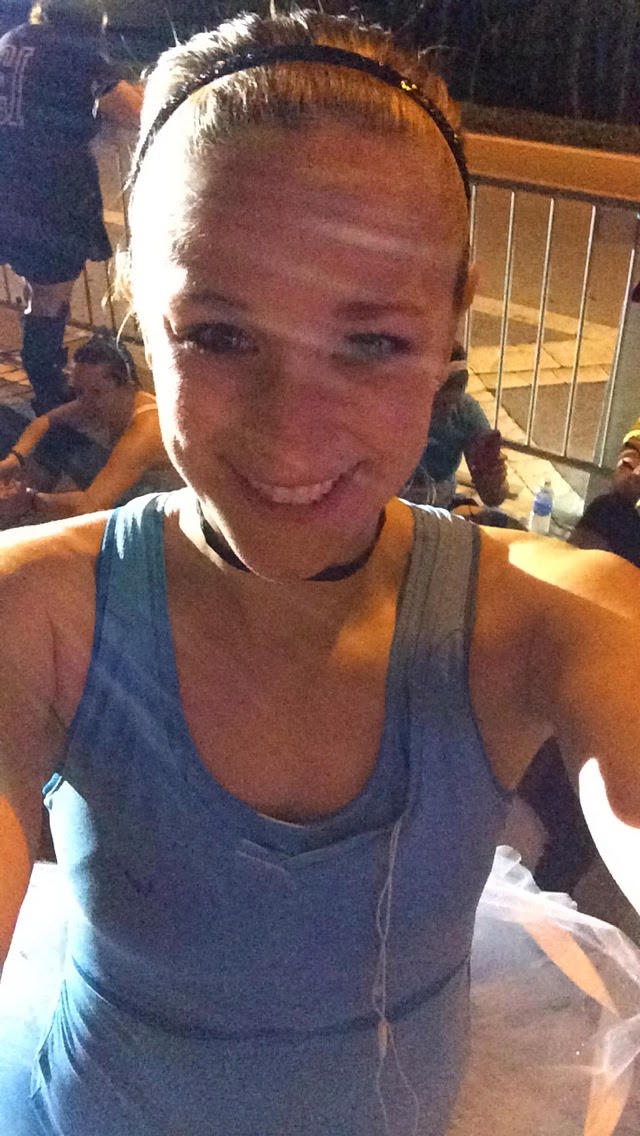 I made friends with some random people in my corral and naturally took a few selfies before we were off! The race starts at 5:30am and my corral was going by 5:38am. Ashley and Julie didn’t cross the start until 6:40am…I was over halfway through my race! 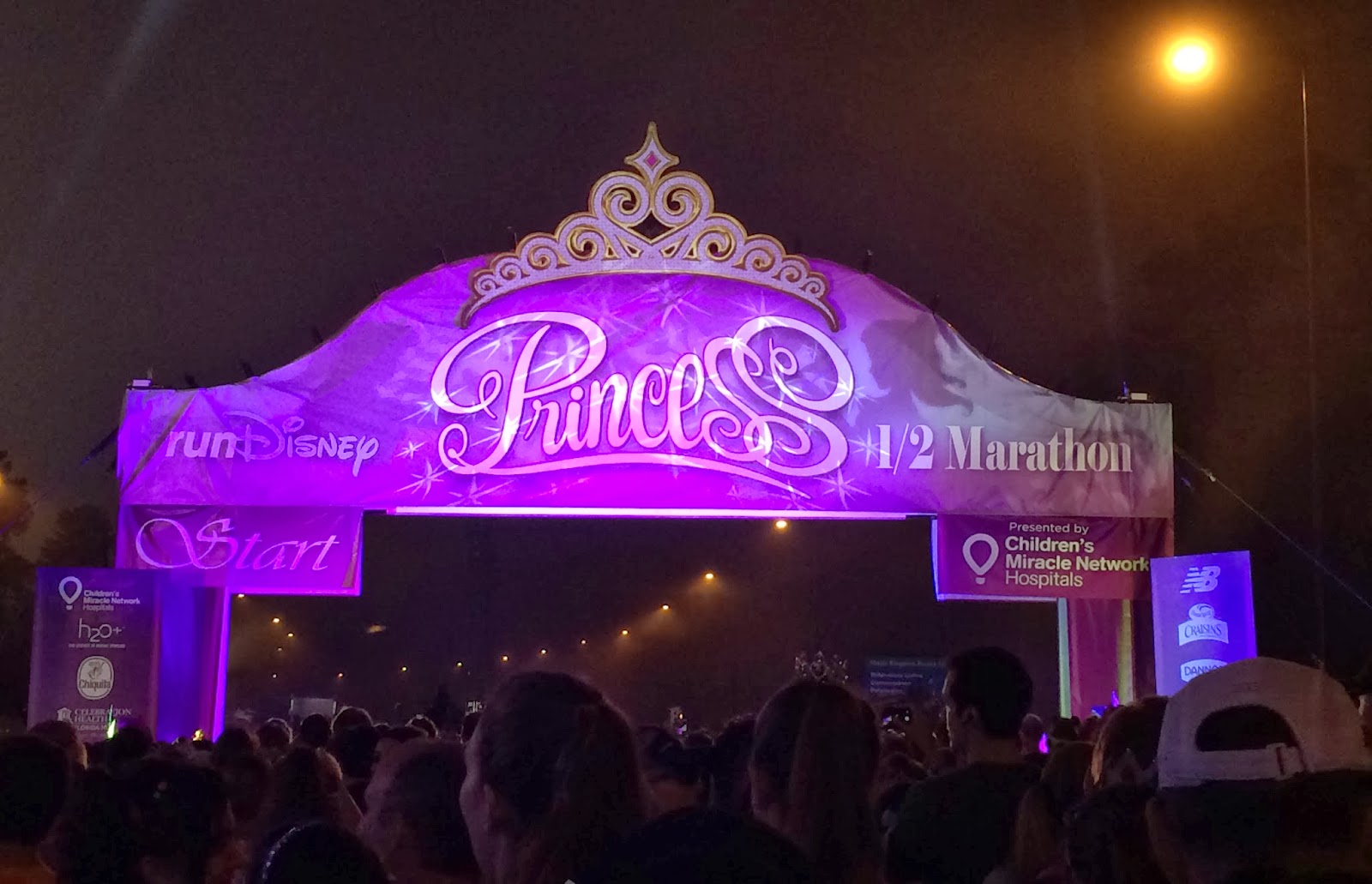 Fairy God Mother sends each corral off with fireworks and a bippity boppity boo! The air on Sunday was thick and muggy. The humidity was at 100%, it was about 65 degrees and the fog was intense. You can see the mugginess in most of my pictures.

Despite the crummy weather, I actually felt great which is weird for this asthmatic girl. I think the magic of Disney just had me on a natural high and it held through the entire race! I hit the Magic Kingdom car entry way just past two miles. Of course, it’s still another 3 miles before you even enter the park! To think that we run the distance that cars drive and then people take a shuttle or ferry to get to the park is pretty funny. 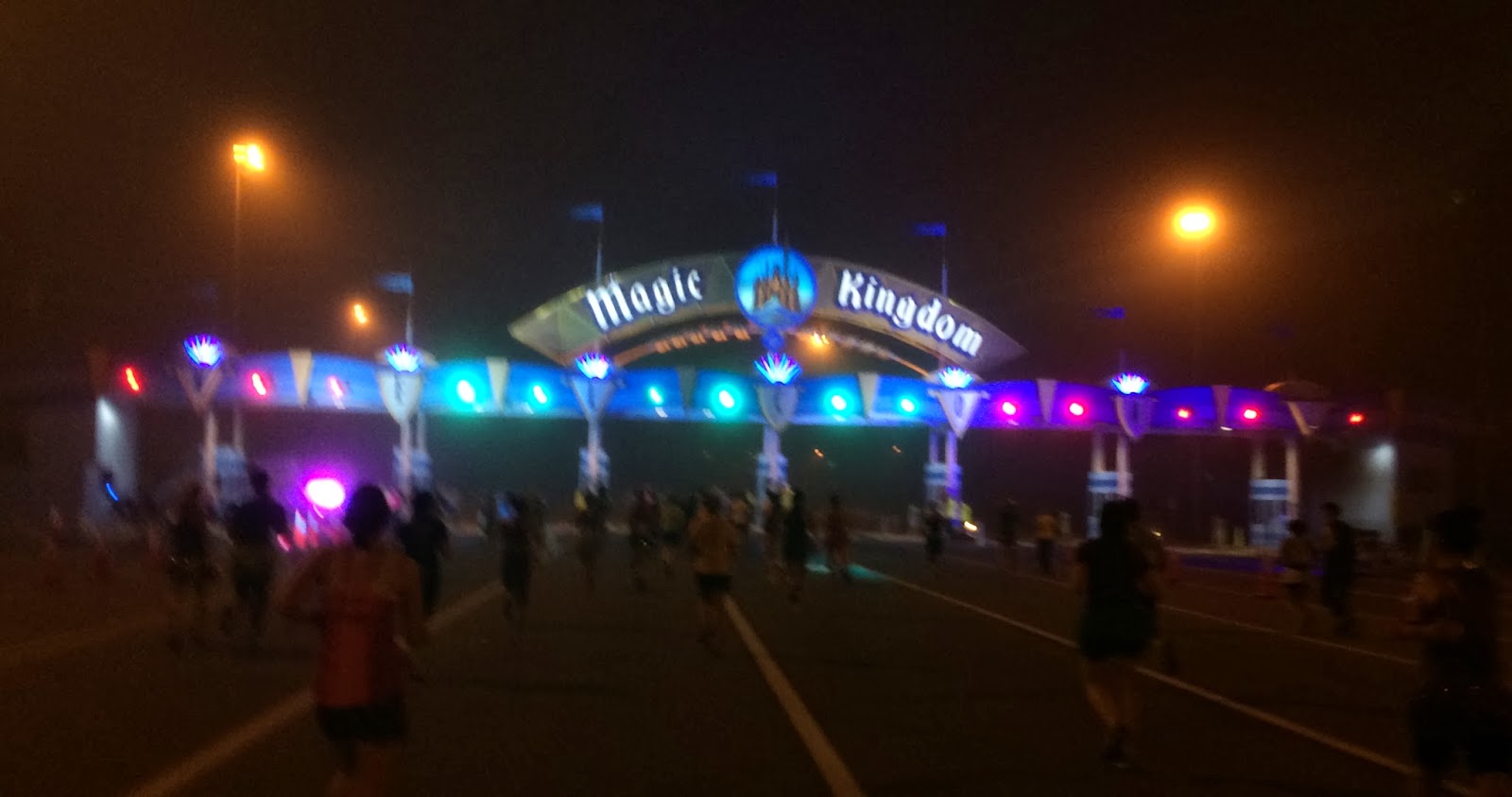 Once inside the park, we ran straight down Main Street USA with Cinderella’s Castle in our sights! I stopped and asked a volunteer to snap a picture of me. She was the sweetest and said, “Of course! I’m here for you!” Make my day 🙂

After that picture, I ran right into Tomorrowland where I saw Buzz Lightyear with only 3 people in line! Ummm yes, I needed a picture with him immediately! My goal this year was to not take the race so seriously. Not to worry about my pace {I didn’t even have my Garmin!}, to run for feel, to have fun, take everything in and take as many pictures as possible! 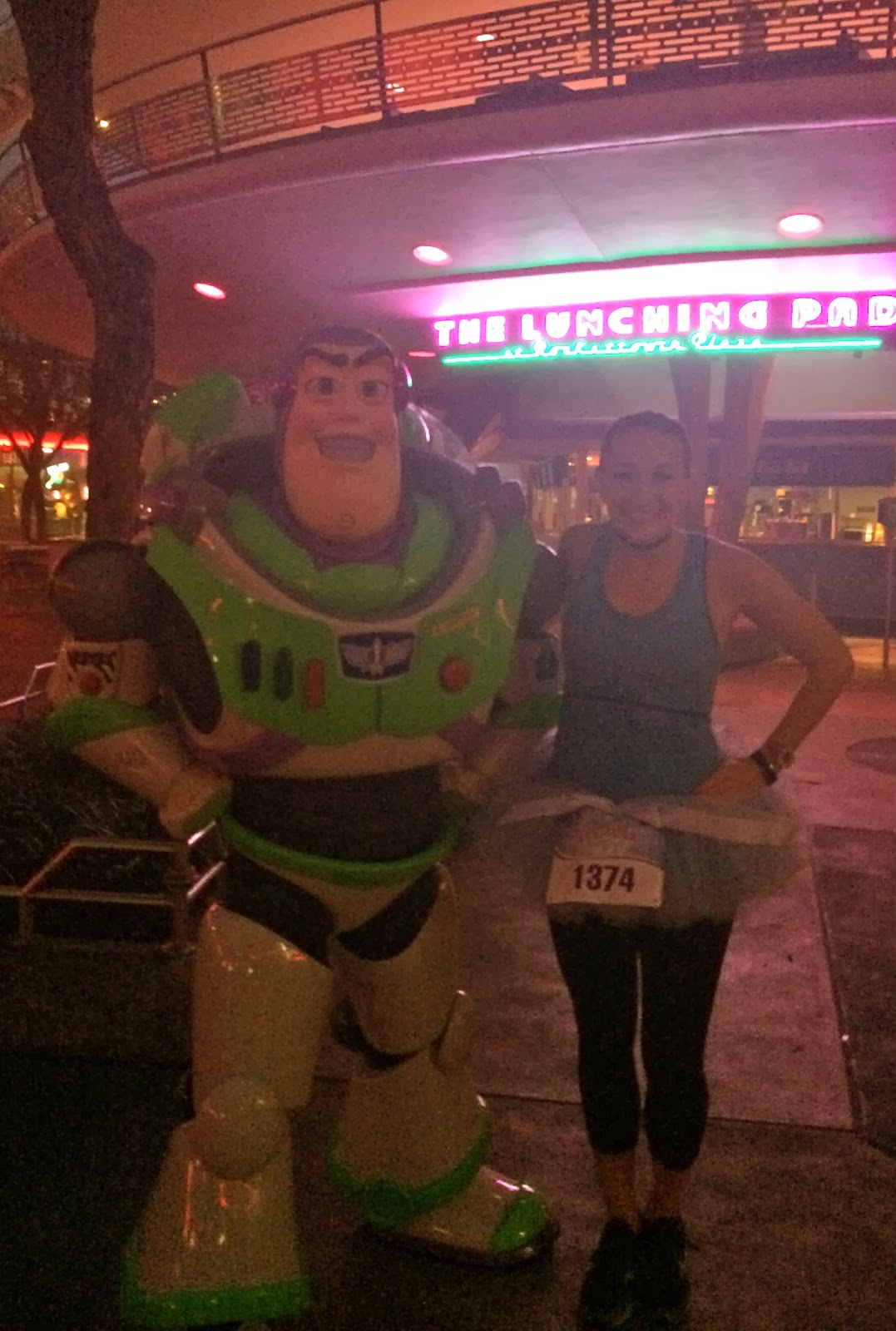 With my goal of taking pictures in mind, I saw Prince Mickey shortly after Buzz. There was a bit of a line, but I said who cares and jumped in line! It only took about 5 minutes and was totally worth it. I got a picture with Prince Mickey and a great shot of the castle lit up from behind! 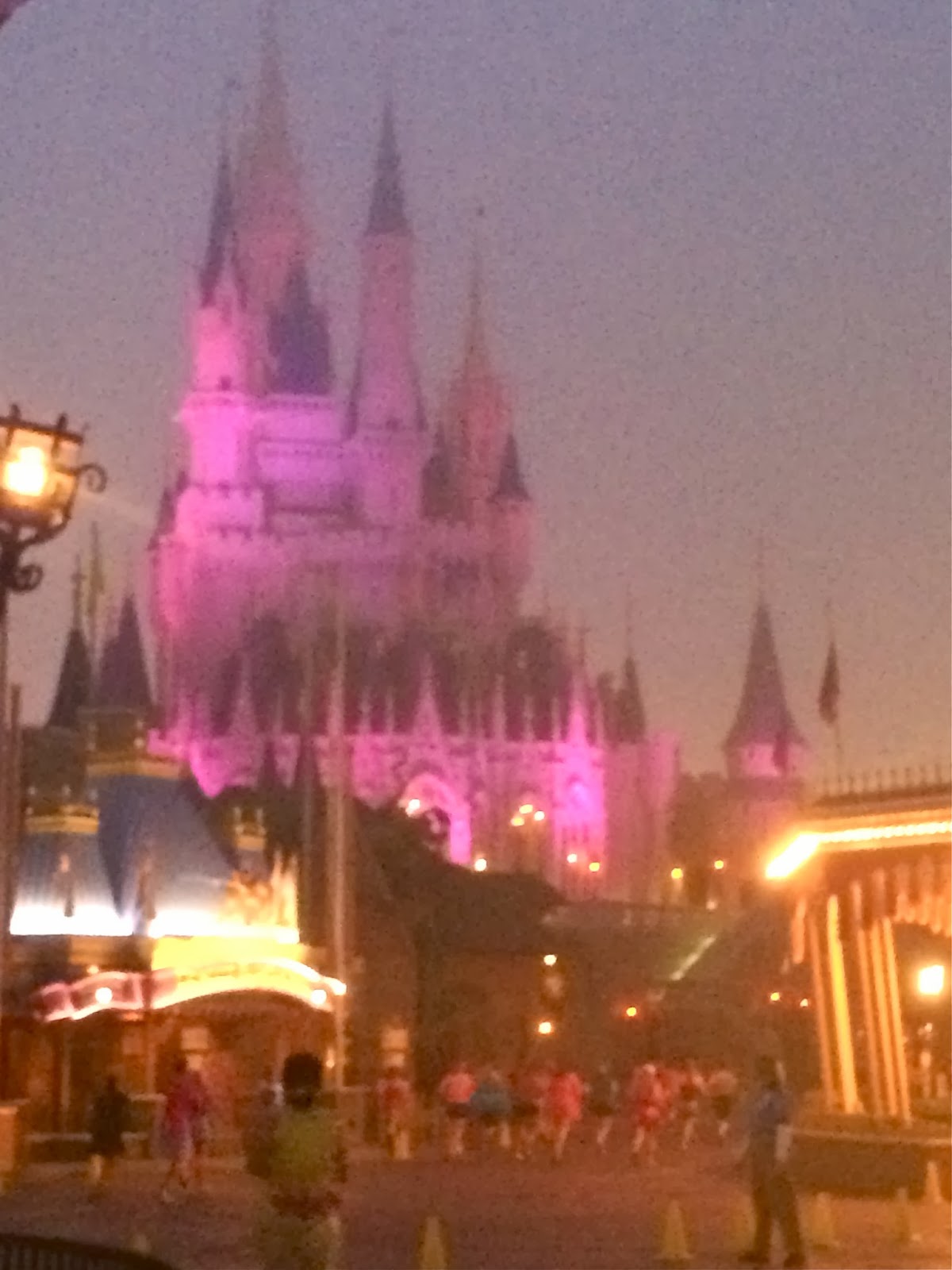 Then I ran through the castle and got a professional picture taken in front of the castle! Hoping it turns out good. The castle is just before the halfway point and personally give me a second wind every year. This year I wasn’t even winded despite the humidity, I felt amazing and still got that extra surge and felt like I was flying through the rest of Magic Kingdom. I was sure to take in everything!

As we exited the park, I knew there would be a princess in front of the castle float like there is every year. If the line wasn’t too long, I really wanted to get a picture. It was my lucky day, less than 10 people were in line so I got another quick break before a picture with Aurora and Prince Philip! 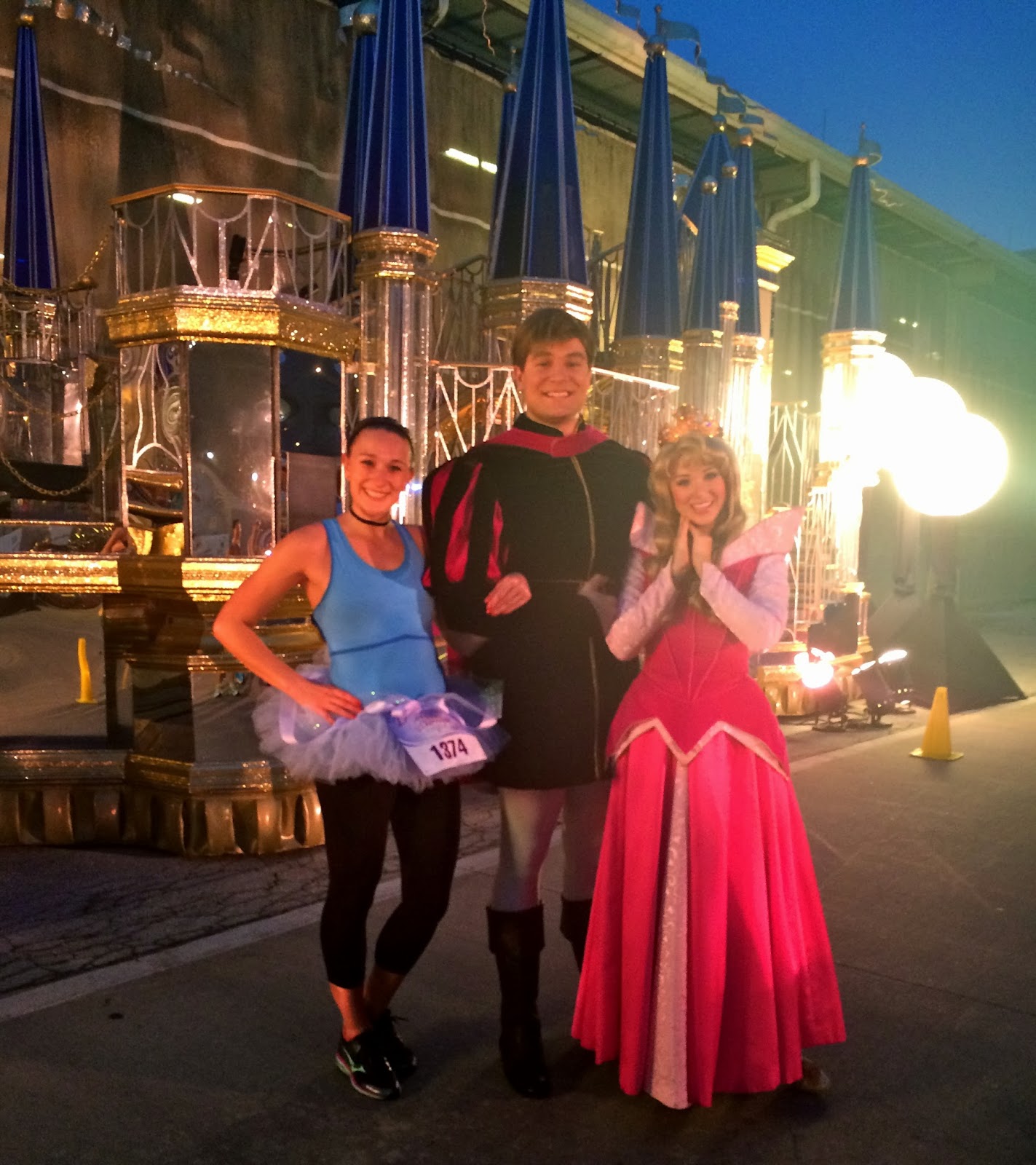 If you follow me on Instagram, you may have seen that picture already! I Insta’ed it while I was running! The next few miles there were a few characters that I could have stopped for, but just didn’t really feel like it. I was on a roll! I did finally stop when I saw Genie especially since he had only 2 people in line…score! 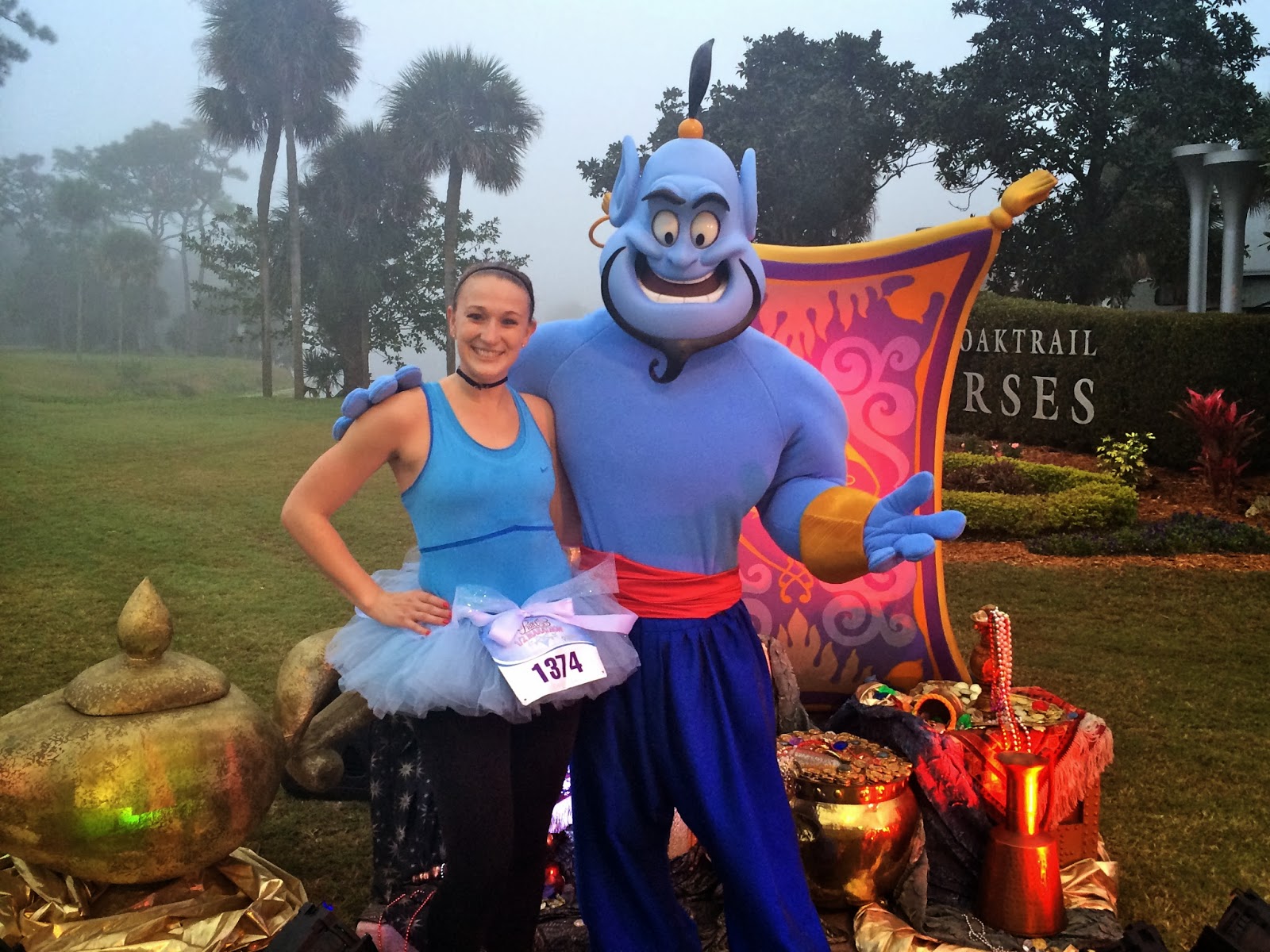 A bit after mile 8, Luna had several signs and a cheer squad set up. They’re big sponsors of the Disney Princess race and created the most creative signs this year! I had to snap a few pics… 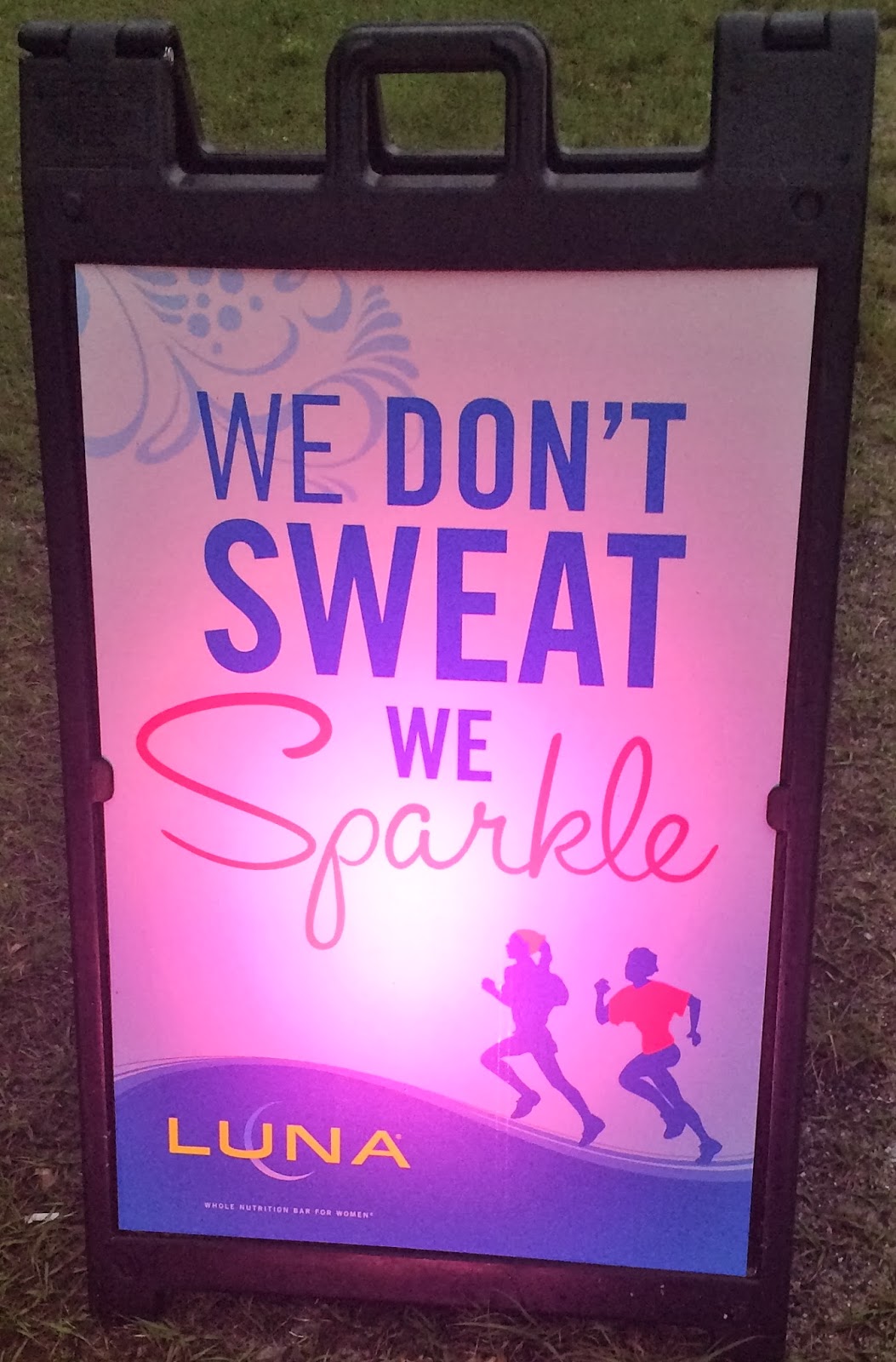 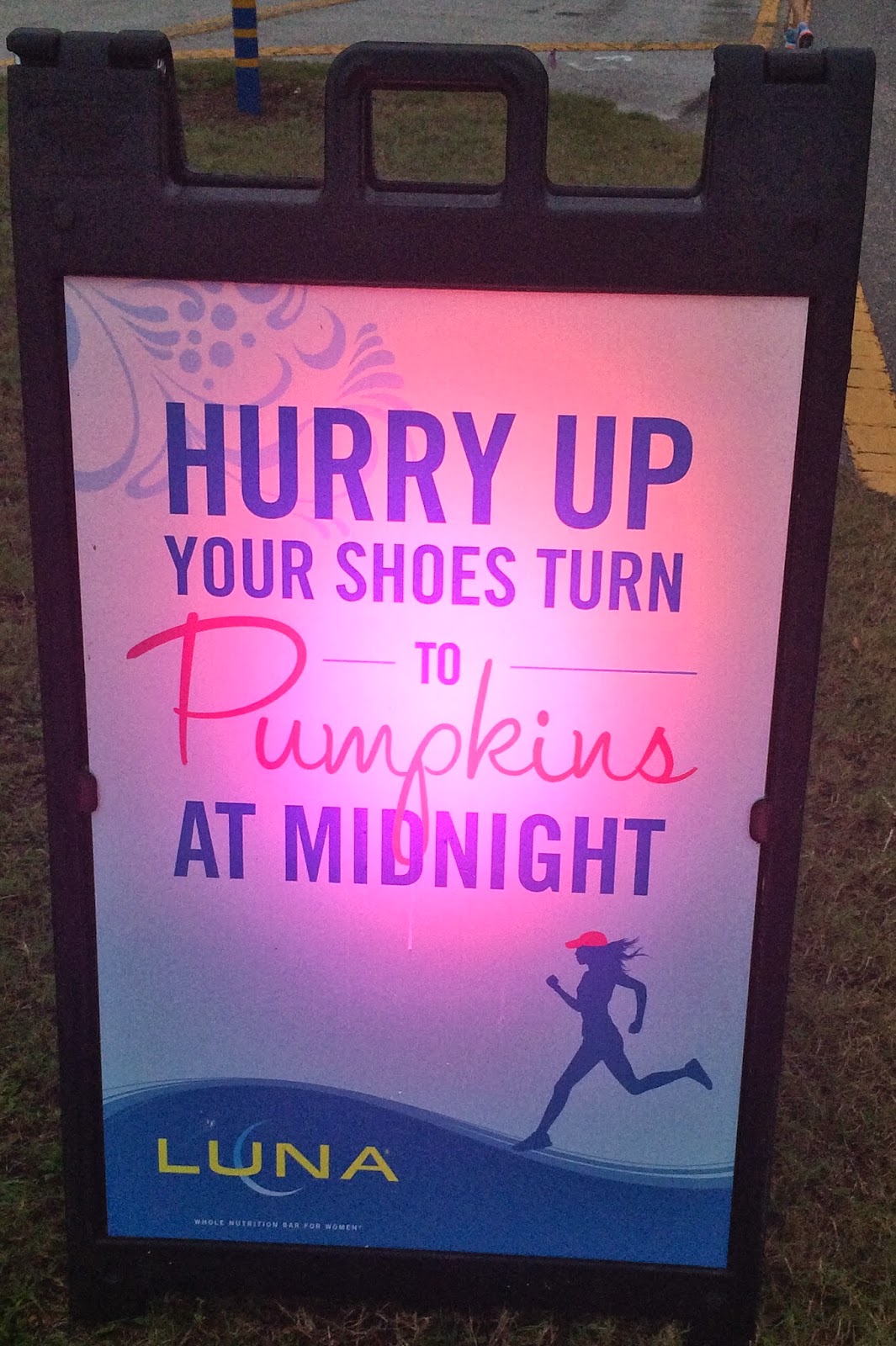 Around mile 10, I saw Mrs. Incredible aka Elastigirl with no line and knew I needed to jump in a picture with her. I need more practice posing apparently because she looks way more intense than me. I just look awkward…and I love it. 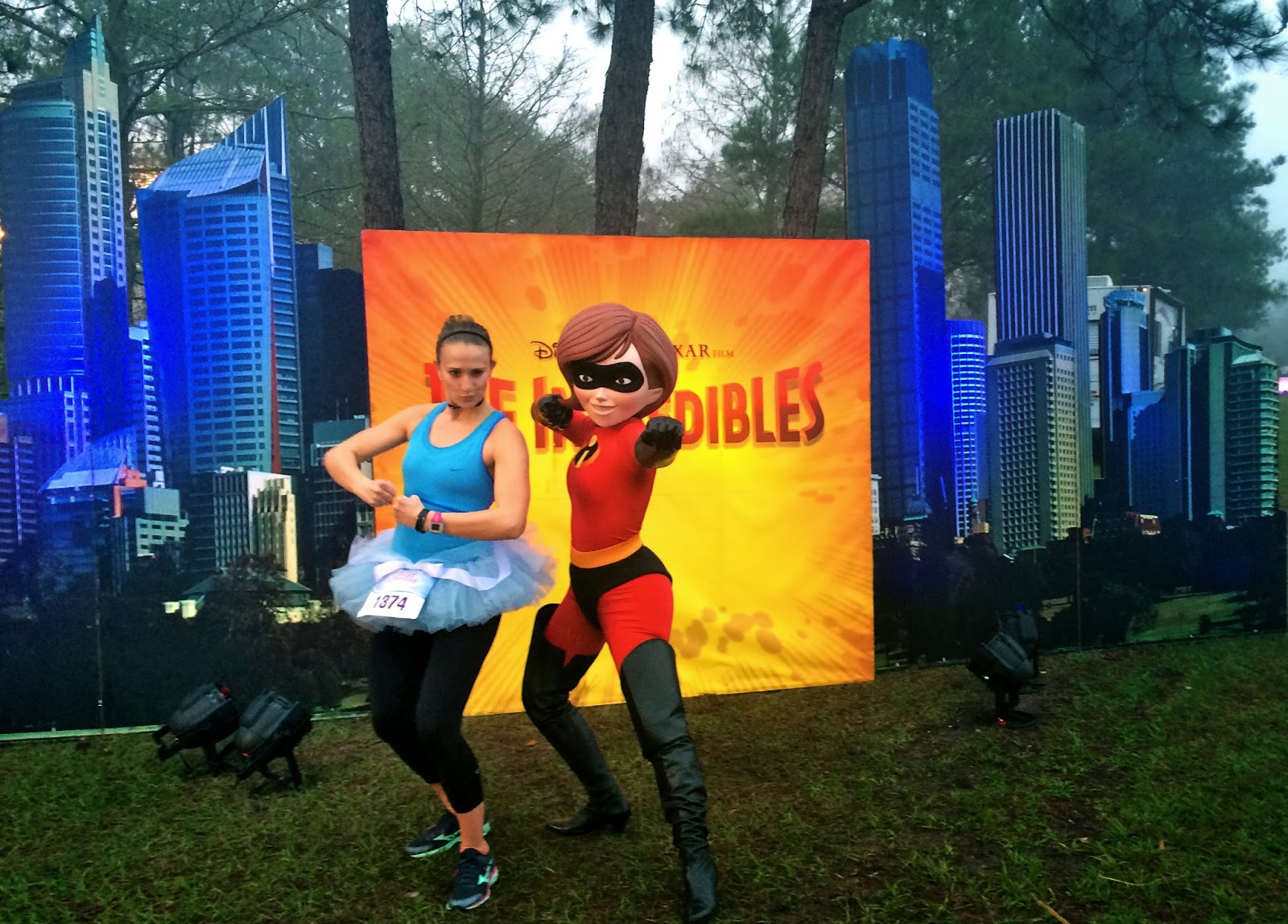 That was the last picture I took during the race. After Mrs. Incredible, there was a two mile stretch that consisted primarily of 3 very long over passes. Yay hills! The over passes have banked turns going up the hill which is killer on you feet and knees. Other than the pains on the turns, I felt just fine and powered up the hills with no problem. The toy soldiers from Toy Story always keep you motivated and get you to keep running when you may want to walk. My favorite quote he said when I ran by was “You chose to sign up for this. You wanted to run 13 miles. In fact, you PAID to do this so do it!” I loved it!

With a mile to go we find our way into Epcot where the crowds and enthusiasm picks up again. Runners are also just happy that there are no more hills at this point! In Epcot, there are a lot of twists and turns. At each turn you think you may see the finish line so I feels like the last mile goes on forever! Eventually, the finish line really does appear, I crossed, got some fairy dust and my medal! I love getting more bling to add to my collection! 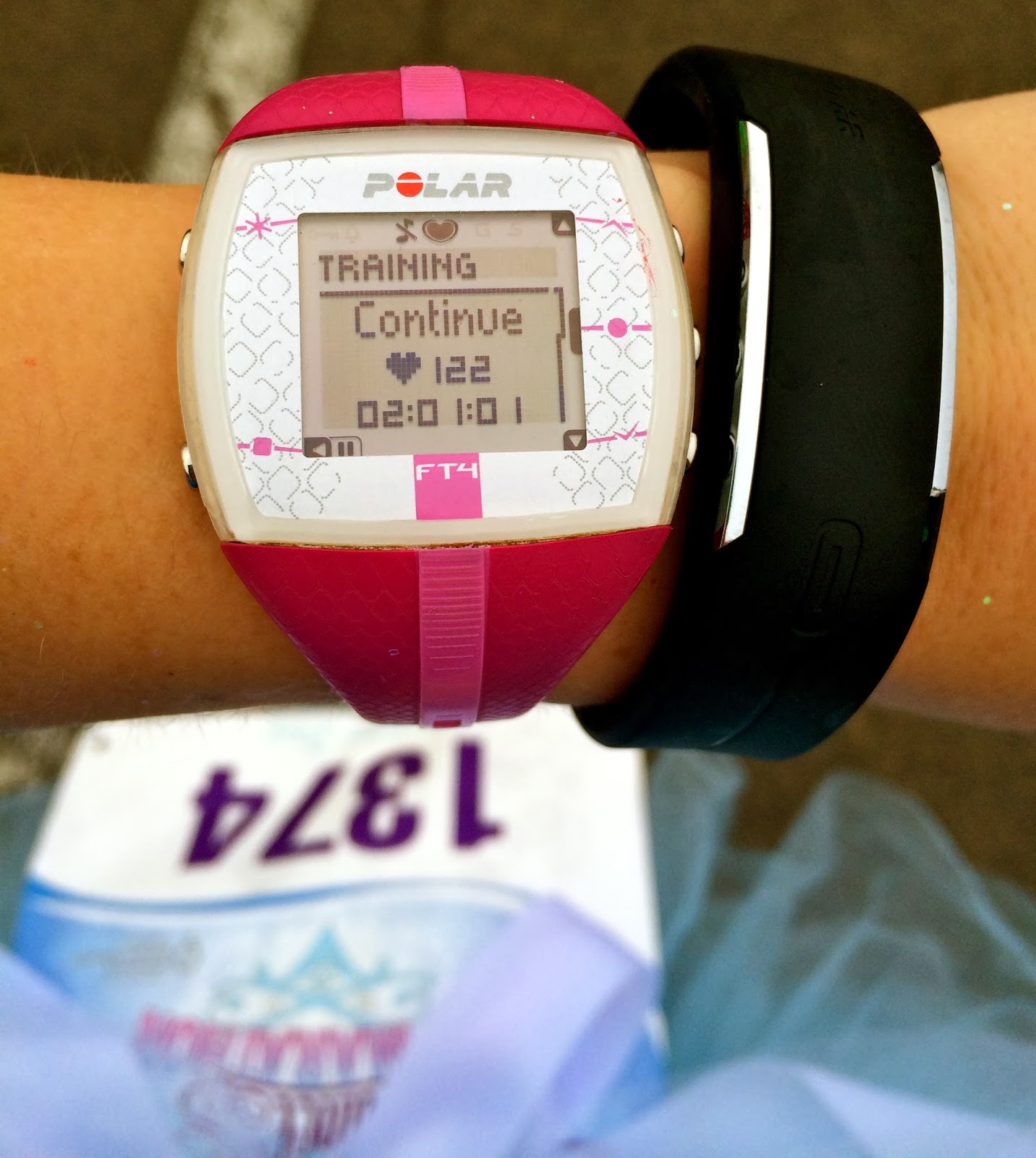 I stopped my watch only during my wait for Prince Mickey. My official race finish time was 2:05:45. I was on pace to finish around 1:55 if I hadn’t stopped! It wouldn’t have been a PR, but it was definitely awesome considering the race weather conditions! Post race I had to wait a while before the girls joined me. I wandered around, watched the awards ceremony, called JP and woke him up bright and early, etc. When the girls joined me, the picture taking began! 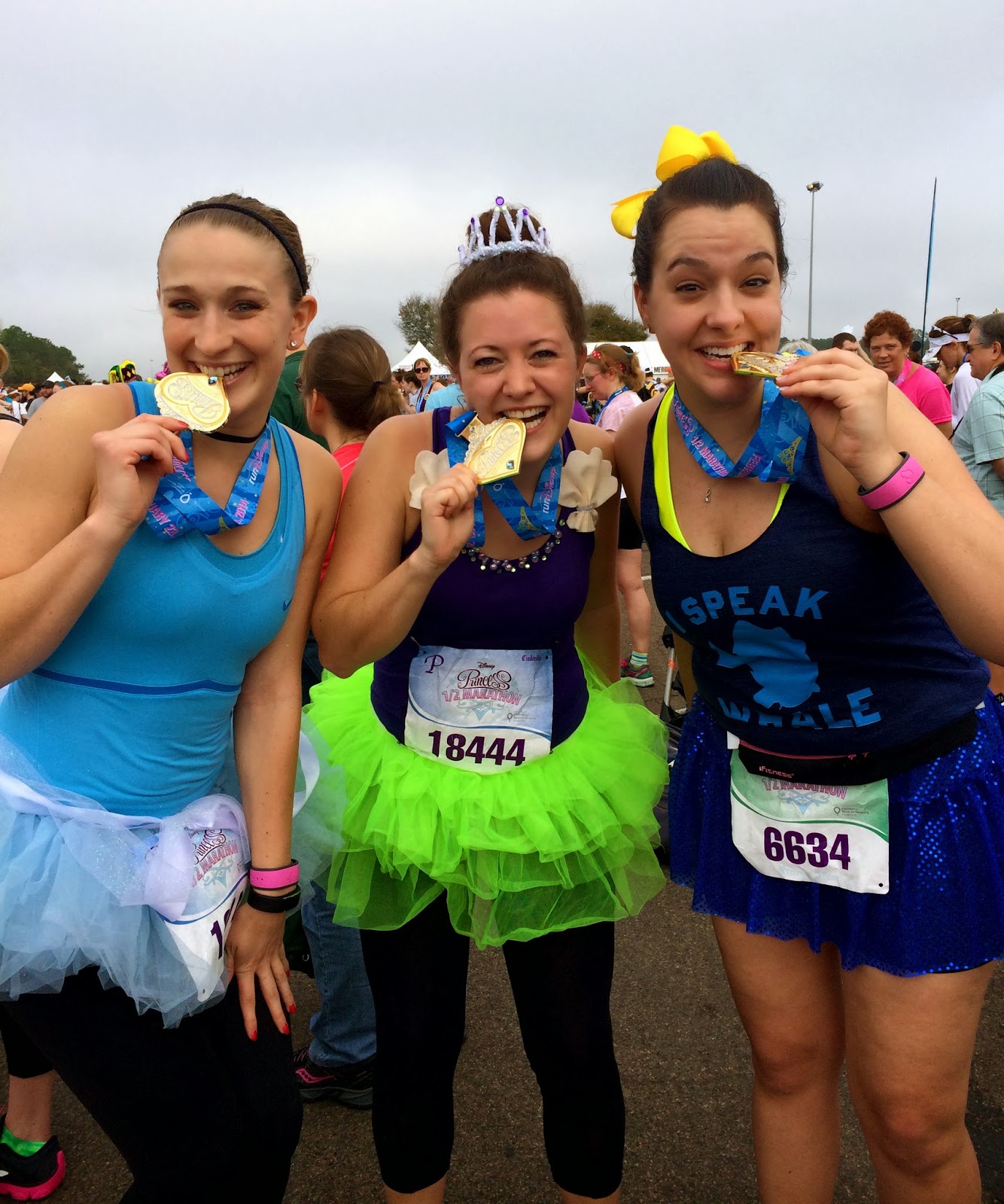 Julie pit stopped at the medical tent and we snapped this one before she joined us. Yay A^3! 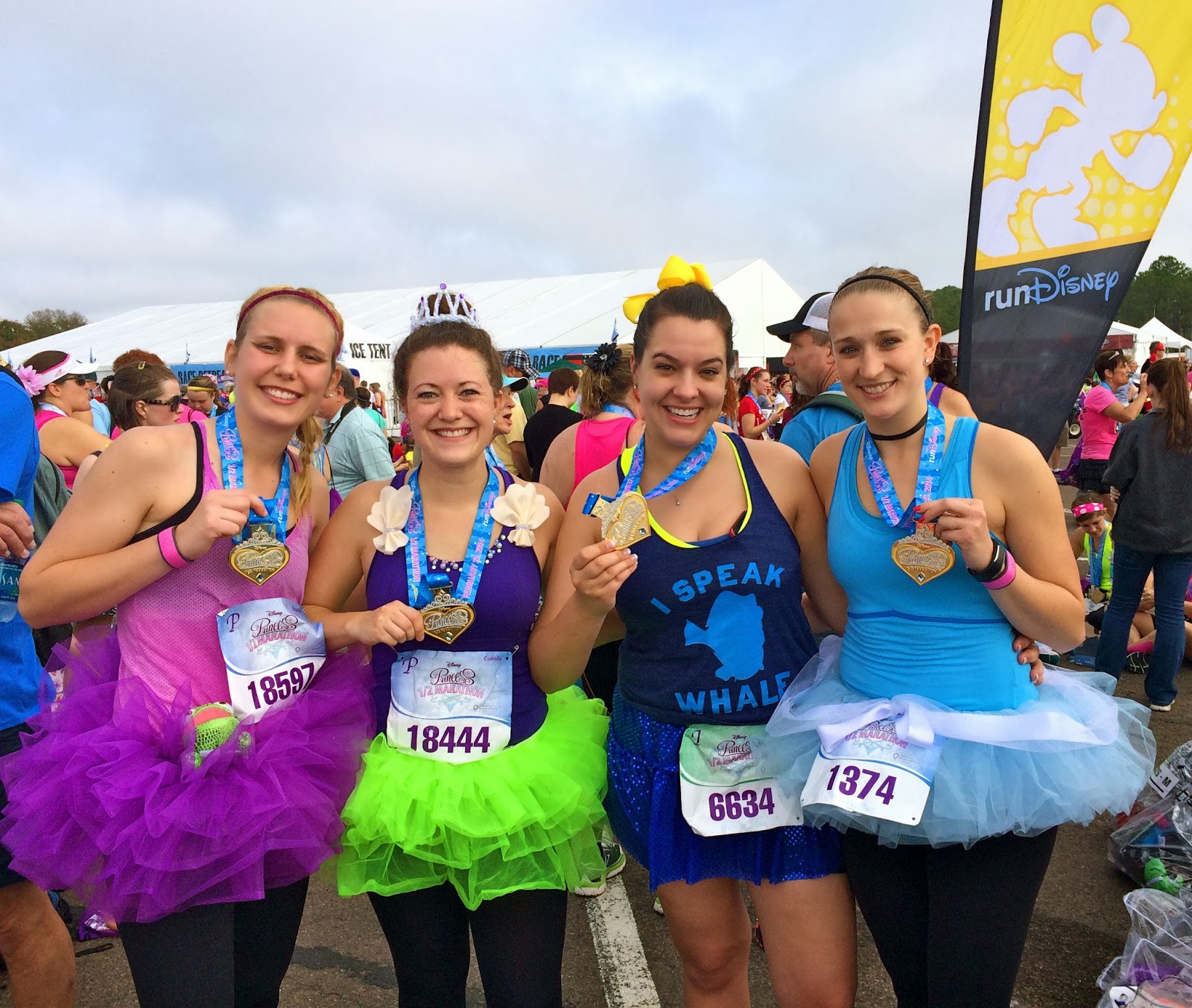 Then we got yet another fantastic picture of some of the best friends a girl could ask for! Then we high tailed it for the bus so we could get some food! Hey, a girls got to eat. Important things post race people! 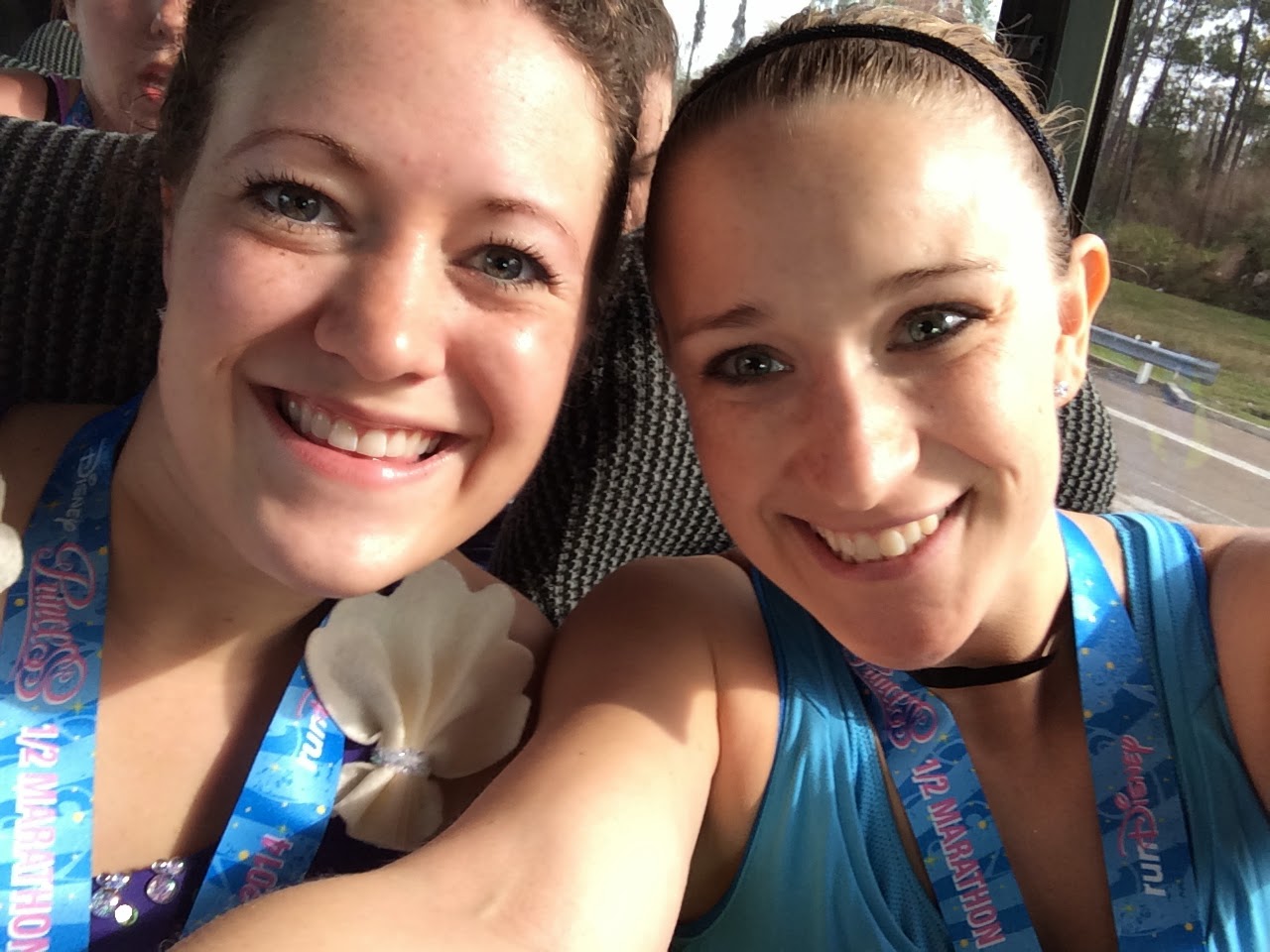 It was a great race for all of us. I think Julie and Ashley are going to sign up earlier next year so they don’t have to take off in the last corral and dodge people for over half the race!

Have you ever run a Disney race?
Did you dress up?
What is your favorite race you’ve ever run?