It may have only been the 3rd year that I have ran the Disney Princess race, but it is the 5th year it’s been a part of the runDisney race series! The Princess half has gone from roughly 8,000 runners to over 25,000 runners this year. It’s an amazing race to be a part of and if you’re looking to tackle your first half marathon, this is the place to do it. You’re not pressured to run for time, but instead for fun, camaraderie and experience.

Worst part about the race? The 2:50am wake up call. No one should be awake at that hour…unless you’ve had a great night and you’re just now going to bed 🙂 The good thing about waking up at that hour is that you get to play dress up and look like a glorified 6 year old. No shame here. I love dressing as a princess/queen. This year, I decided to channel my inner villan {though I’m sure some would say it’s not too deep 🙂} and dressed up as The Queen on Hearts also known as The Red Queen from Alice in Wonderland.

Fun story: I was actually the Queen of Hearts in the play Alice in Wonderland when I was a sophomore in high school. I’ll see if I can dig up some pictures for y’all!

By 3:30am we were out the door and headed to the buses! Waiting for the buses is never pleasant because unfortunately you’ll see several full ones pass by before you can hop on one! Since we got out their early we were toward the front of the line though. Once you arrive at Epcot, you still have quite the hike to get to your corrals. We’ll call it a nice little warm up! After our warm up, I was in for an exciting surprise! Well not really a surprise, but it was exciting! Meghan from Little Girl in the Big World was waiting for me outside her corral so we could finally meet IRL! We ran our first marathons on the very same day, mine in Houston and hers in Orlando. So of course we bonded over training, being nervous and finally completing our races. It’s always such a blast to meet blog friends in real life! 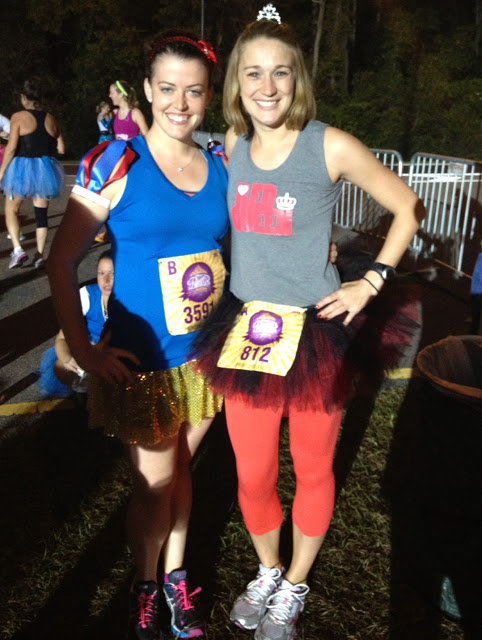 Then Julie and I had to part with Alison and head to our corrals. This was Alison’s first half marathon and she was able to find some runners at her pace in one of the Florida Galloway running clubs {she runs with the Galloway club in Houston!}. Of course another picture was necessary before the split. 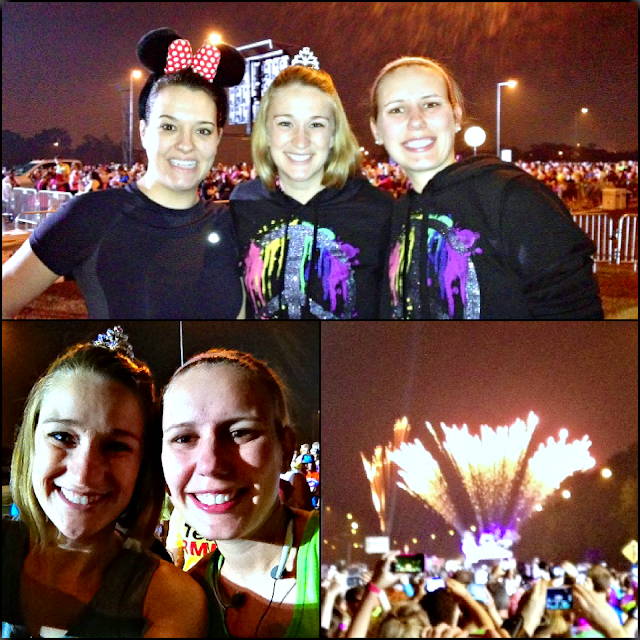 Julie and I planned on starting together in Corral C and running together for the first 2 miles. It was nice to have someone to wait around with and take pictures, dance around and just have fun before the race. 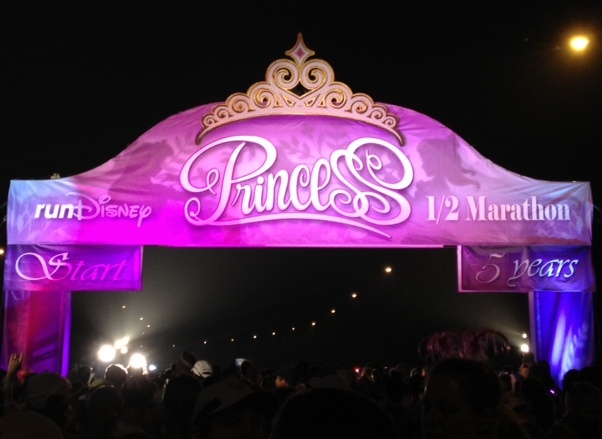 5:30am was the official start and less than 30 minutes later, Julie and I were on our way! 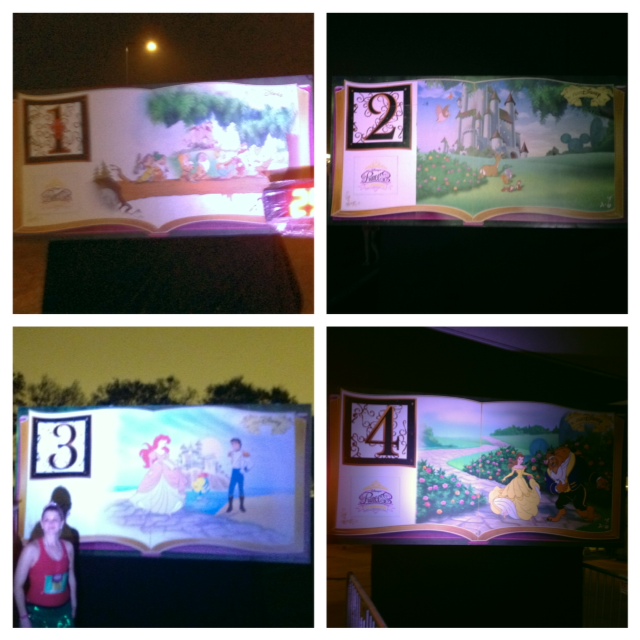 Like I said before, for the first two miles Julie and I ran together. We attempted to take pictures of each other running with my iPhone, but let’s be honest, iPhone’s aren’t the most proficient cameras in the dark…especially when in motion. The first few miles are the most annoying because you have to weave quite a bit to get around people going slower than you. I was surprised at how much weaving we did considering we worked our way pretty close to the front of the corral! Oh well, it was nice to make sure I slow because I’m notorious for running too fast at the start of a race! Julie and I enjoyed each other’s company then at the two mile marker, I went to take a picture of the mile sign while Julie went to take a picture of the pirate ship! We were on our own from then on! 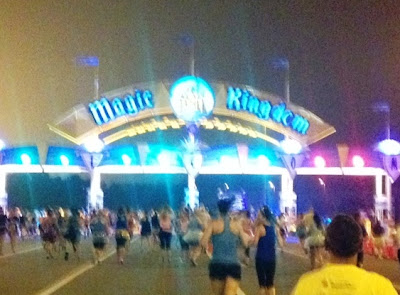 Shortly after our split, I came across the Magic Kingdom sign! This sign is deceiving though. It’s still another 2+ miles until you actually get into Magic Kingdom from here. Remember, Disney is a HUGE property which means lots of roads and parking. 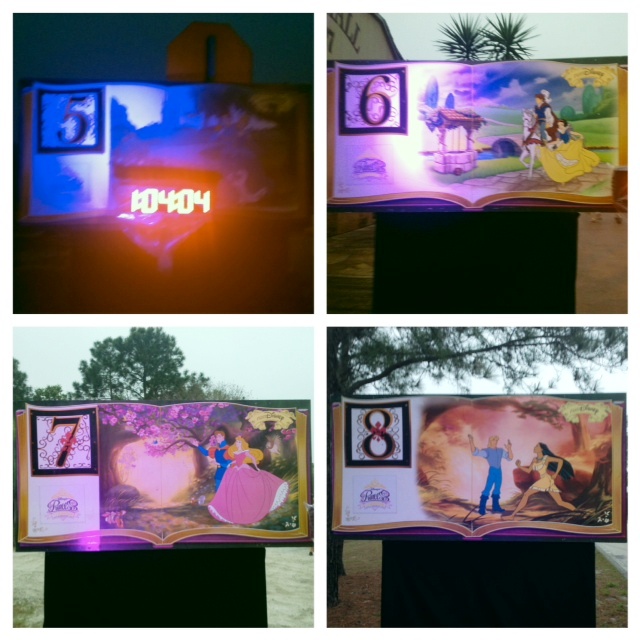 Eventually, I really did make it into Magic Kingdom. Right around mile 5. As you enter, you get to run down Main Street USA heading right towards Cinderella’s Castle! I found a wonderful volunteer and asked her to snap a picture for me. LOVE the volunteers at Disney races, big shout out to all of those who helped make my experience truly magical!

I just realized that I forgot to mention the weather. Or should I say the humidity. Holy humidity! Luckily for me, this Houston girl is used to humidity and this isn’t the worst I’ve ran in…remember my 30K or Rhythm and Blues 2 weeks prior?! Last year’s Disney Princess race was cold. Cold as in I wore my jacket for the first 10 miles cold. This year, Julie and I shed our sweatshirts before our corral took off. We really only wore them to keep our cores warm especially since we’re both cold natured people.

Anyway, after passing the castle, you run through Tomorrowland and into Fantasyland where I saw none other than Alice. My heart skipped a beat because there were only 4 people in her line. Hello awesome! 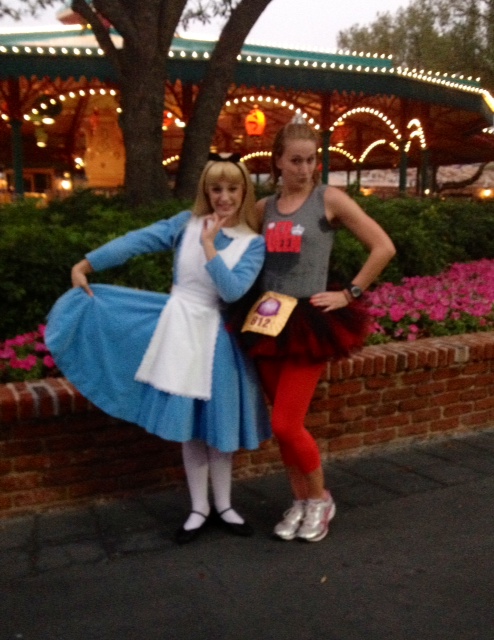 After snapping a picture with Alice, it was time to run through the castle right at mile 6. 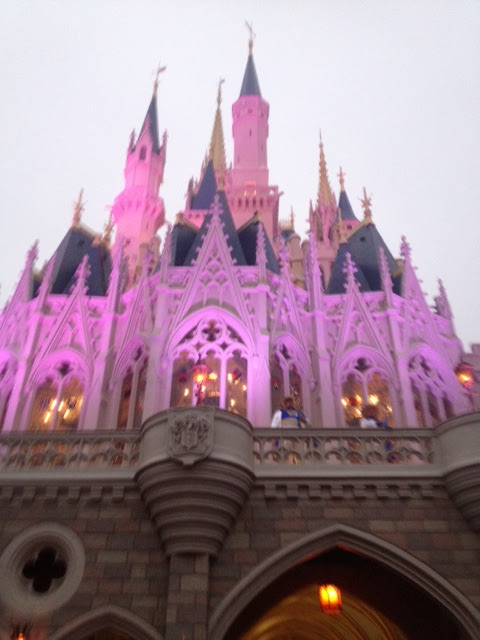 I love how it was lit up pink! Once you run through the castle, you head into Frontierland and eventually out of the park through an employee only back entrance! VIP right here. One of my favorite parts of the race besides the parks would be the halfway point. They were playing Alicia Keys This Girl is on Fire with signs all around saying things like “you’re on fire, you’ve made it half way!” and other fun similar sayings. It was clever and an energy booster. 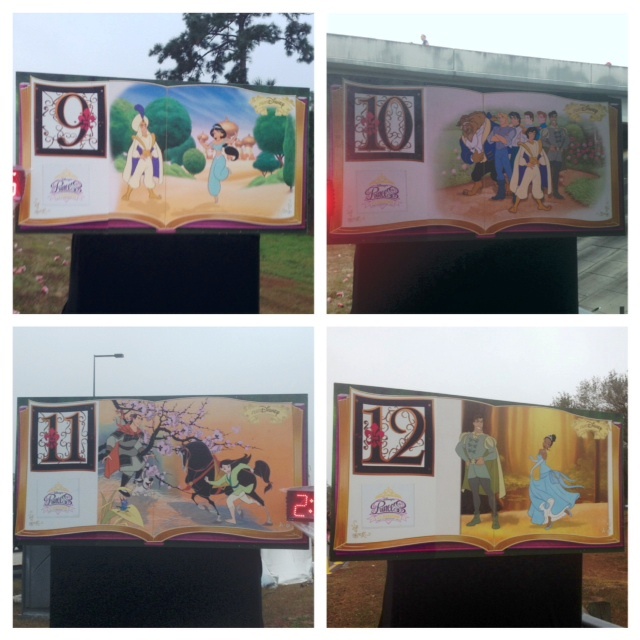 Somewhere around mile 10-ish are the army men from Toy Story telling you that you’re about to climb up your last hill. Only you get to the top and you can SEE the next over pass hill that you have to climb. Not only that, but there is one more just before Epcot. Not cool Toy Story General, not cool.

Near mile 11 we were nearing Epcot. The best thing about getting close to Epcot is that you’re nearly finished! I took this race easier than most with stops for character pictures and pictures of each of the mile markers, but I also ran slower than usual. I didn’t want to push it with the heat since we still had another day of fun at Disney ahead. That begin said, when I was hitting mile 12 in Epcot, I was feeling great. I’m proud to say that my last mile was actually my fastest! 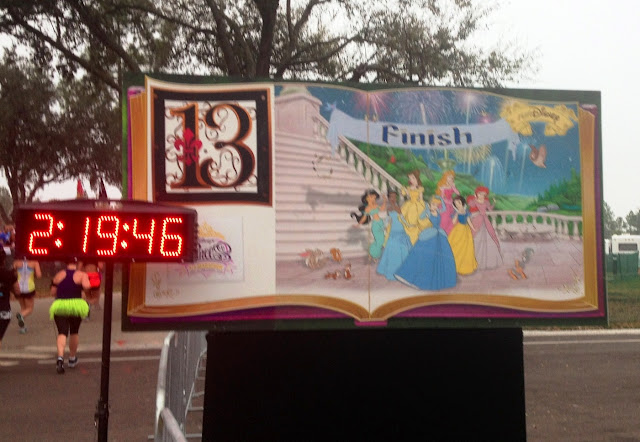 I saw the marker for mile 13 and started full speed ahead! King Mickey and Queen Minnie were at the finish line to hive five us as we crossed! It was the best way to end a race 🙂 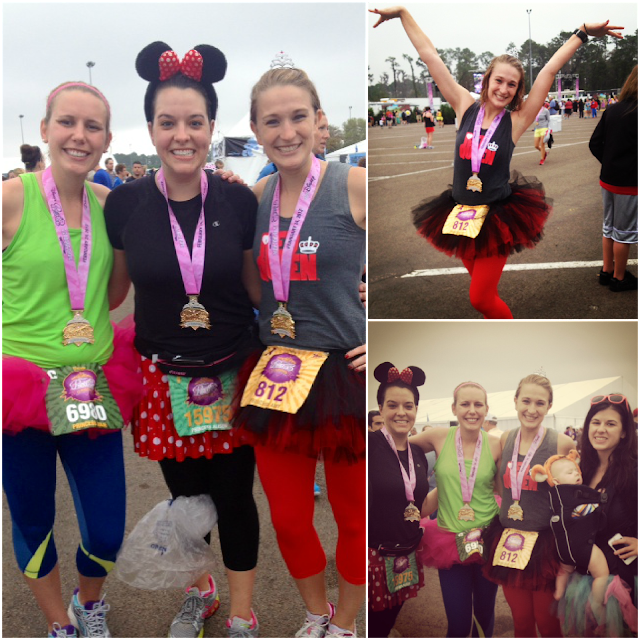 In the end, we all finished and had an amazing time. Big shout out to my girl Alison for running and finishing her very first half marathon! I’m so proud…so when’s the next one? 🙂

As I say every year, I seriously can’t wait to run it again next year!