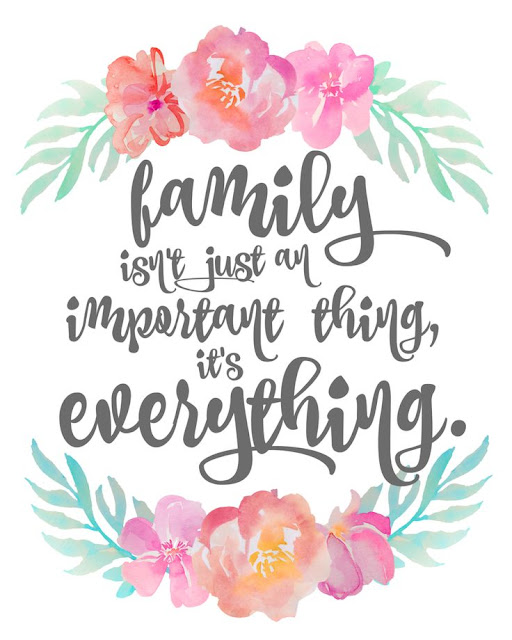 Hey hey and happy Monday after Thanksgiving…also known as Cyber Monday! I’m not here to tell y’all about Cyber Monday deals or even talk about shopping though. I’m here to talk about my family and the wonderful Thanksgiving weekend we had. We had too much fun and spent too much time together not to share.

My family is my world. We are incredibly close and I am beyond grateful for that! On Wednesday night, the whole Timmer gang was together for a couple of hours. Last time we were all together was at Ben and Corbette’s wedding in September {which I still need to share with y’all!!!} and we couldn’t pass up the chance to take some pictures! 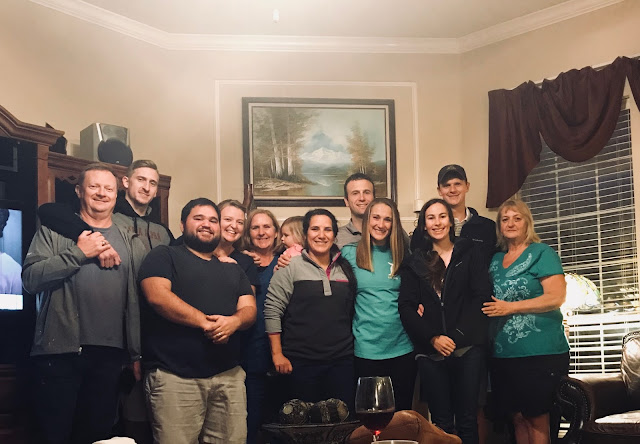 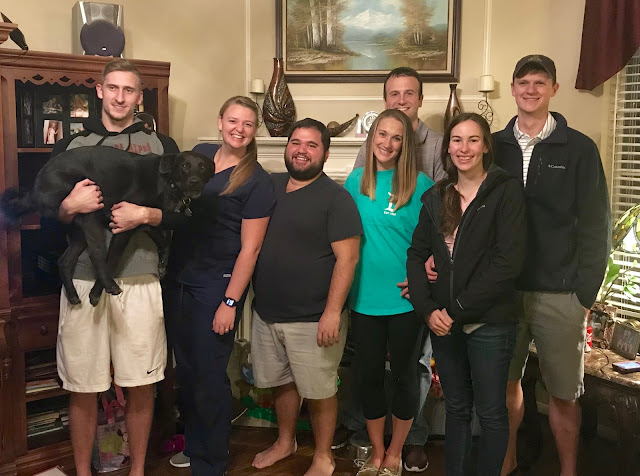 Emily and Matt were taking a 6:00am flight to New York City on Thanksgiving morning, so we soaked up the time we had with them before they headed out on their adventure! We grilled burgers, took tequila shots, talked for hours and laughed so hard. Pretty much the perfect pre-Thanksgiving evening.

Side Note: Meens and Em are so mean. We took a picture and they were making silly faces and I was smiling, so I said wait let’s do another so I can be fun like y’all! And this is what we ended up with. Thanks ladies, thanks. {I still love you both.} 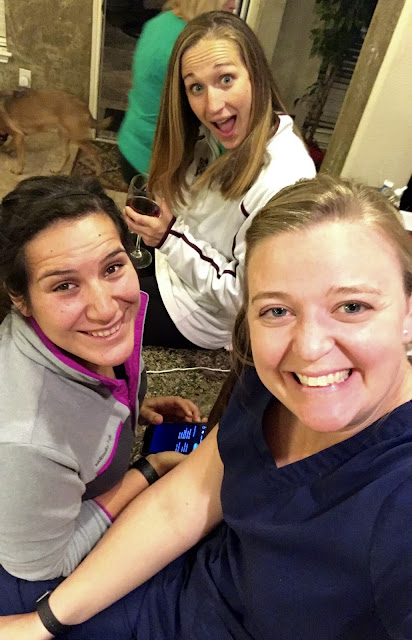 We woke up to a big Turkey on Thanksgiving Day! Someone wanted to wear 7 bows and I obliged. She was too cute not to! 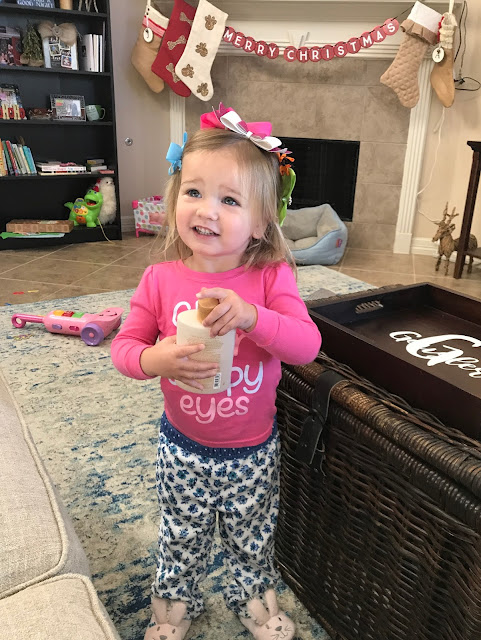 We went over to my parents around 10:00am to help get the festivities started! Chloe helped her Nonna peel potatoes and put them into the big pot. She loves getting to do anything with her Nonna!

I made the green bean casserole and deviled eggs because that’s my job every year! Funny story: I don’t eat deviled eggs, but apparently I’m pretty good at making them! {If you want, check out these awesome tie dyed deviled eggs I made one time!} 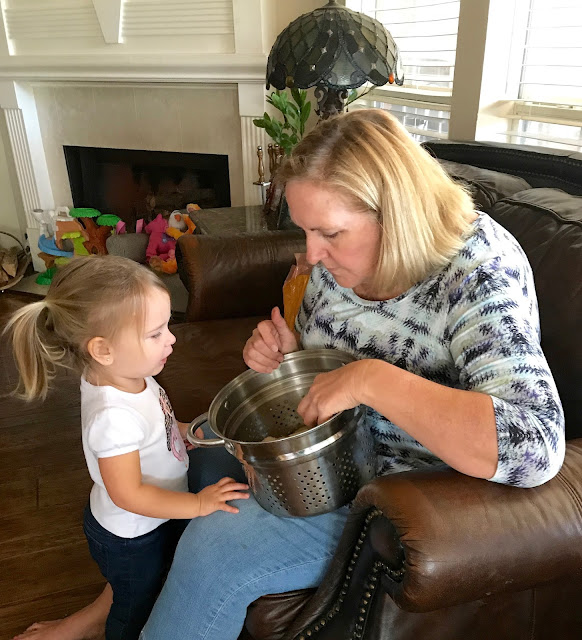 By about 1:00, we were shooed out of the house for the Annual Timmer Games while my mom and Aunt Dianne finished preparations for Thanksgiving Dinner! Every year we head out to the middle school football field to play some random games. We usually do games of skill, but this year was a little different.

Side note: On our way out, Maggie and Moose got jealous that we were leaving and busted THROUGH a small hole in my parents’ fence! They thought it was great and we spent about 10-15 minutes trying to convince them to come back and stop running around like crazies! 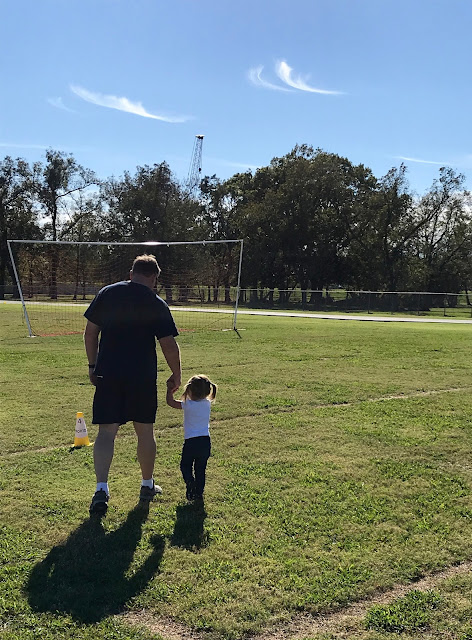 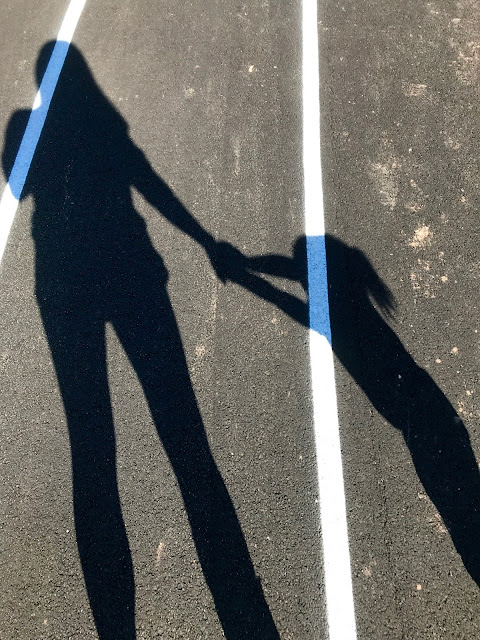 Since Em & Matt weren’t there, we didn’t have quite as many people and I’m kind of down for the count. I may had reinjured my bad ankle at gymnastics the Friday before Thanksgiving. It appears to just be a minor sprain, but it doesn’t feel good. I was on Chloe duty while the others took on a game of soccer! JP was the all time goalie while Ben and Matt took on Dad and Corbette. 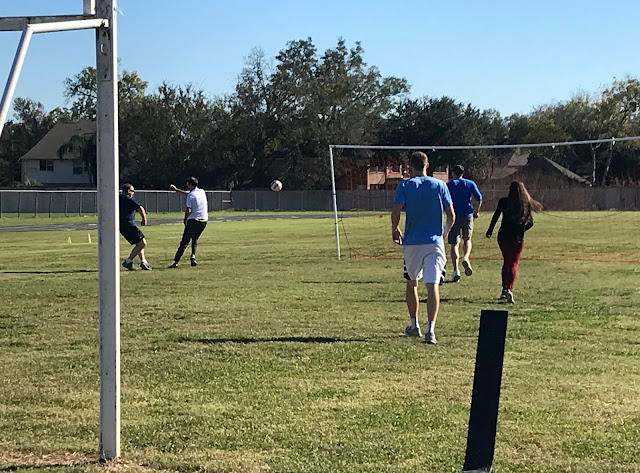 It took a while, but Ben and Matt were the eventual champions winning 1-0! Chloe and I walked around the track, played with the frisbee and rolled in the grass. 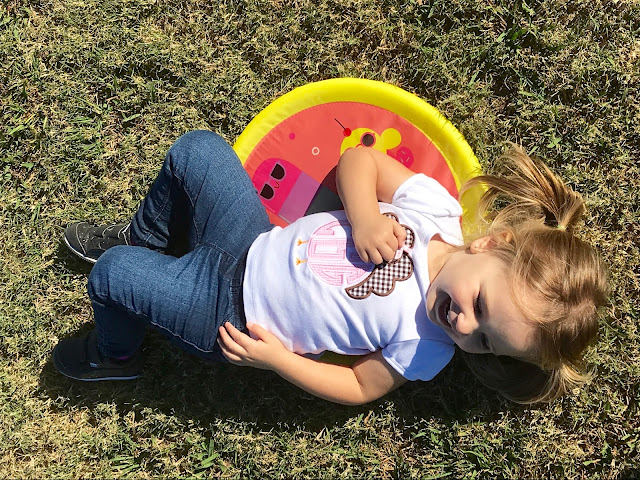 After nearly 2 hours of chasing dogs and playing around, we headed home for our Thanksgiving meal! I didn’t take a single picture for a few hours because we were just too busy enjoying each others company. We ate an amazing Thanksgiving dinner, took Chloe swimming in the hot tub, started up the fire pit, watched football and put up my parents’ Christmas tree! We do have tree decorating pictures, but those are on my parents’ phones. It was an amazing Thanksgiving day, and it completely wore Chloe out! 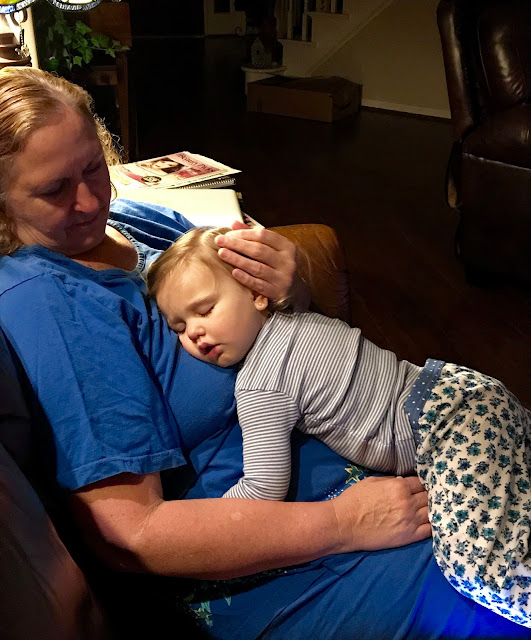 The day after Thanksgiving was quite a lazy one. We just hung out at our house and had a slow morning before Dad, Ben, Matt and Corbette came over to our house! Ben and Corbie still hadn’t seen it since they were in Taiwan last year. After the grand tour, we went to shoot some skeet! 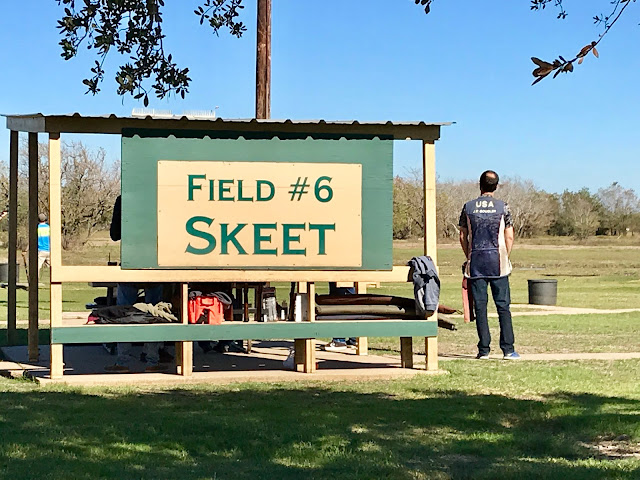 JP was on the USA shooting team in 2004/2005 and he won Collegiate Nationals all around in 2005, so he’s pretty good. However, it’s been a few years since he’s shot. He still managed to get a 24 out of 25 missing the last shot on his first round back at it! I think we’ll need to go more often since it made him so happy!

I didn’t shoot much, but I did get a few shots in and even hit 6 targets! 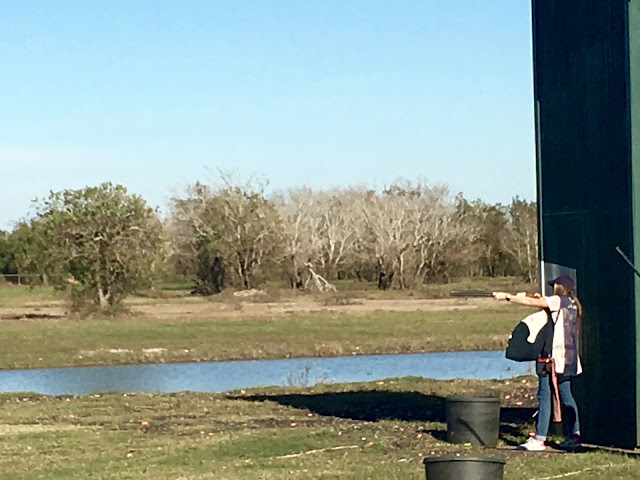 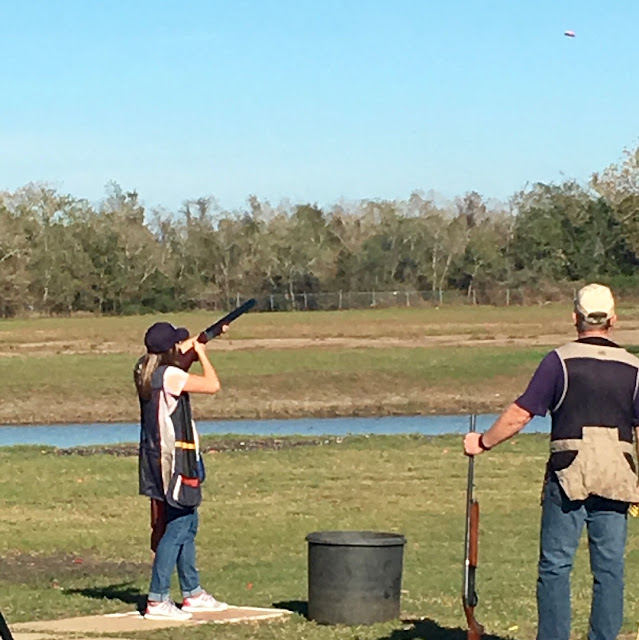 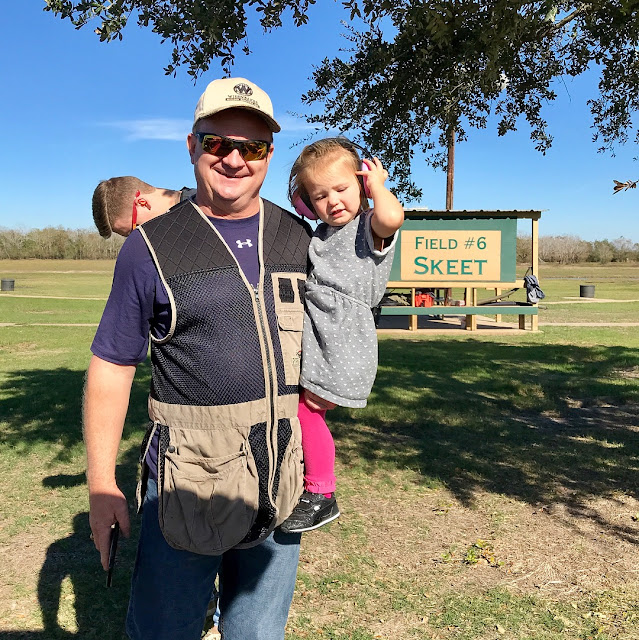 After shooting, we just loaded up the car and headed to College Station to spend the rest of the weekend with JP’s family! 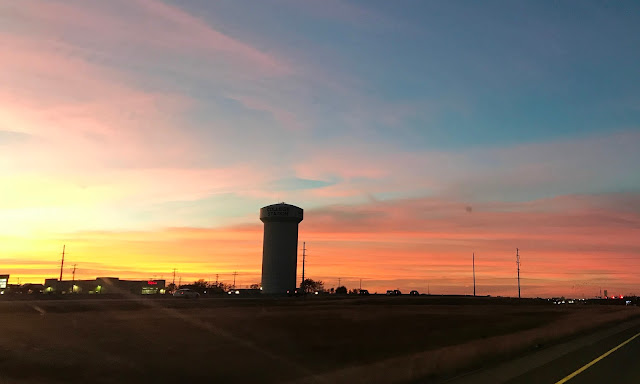 We had so much fun in College Station! Chloe spent most of her time convincing someone to take her outside to jump in her bounce house! Jojo got that baby a little bounce house and she is totally obsessed. 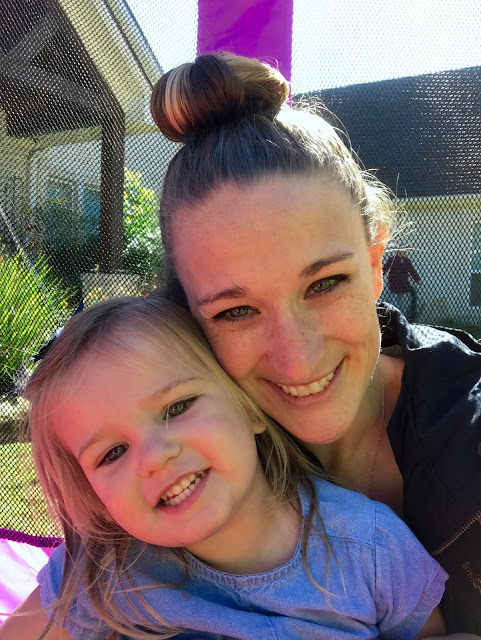 On Saturday night we went out to Central Park in College Station to see the Christmas lights! Chloe is obsessed with Christmas lights, so it was fun to see her reaction to everything. 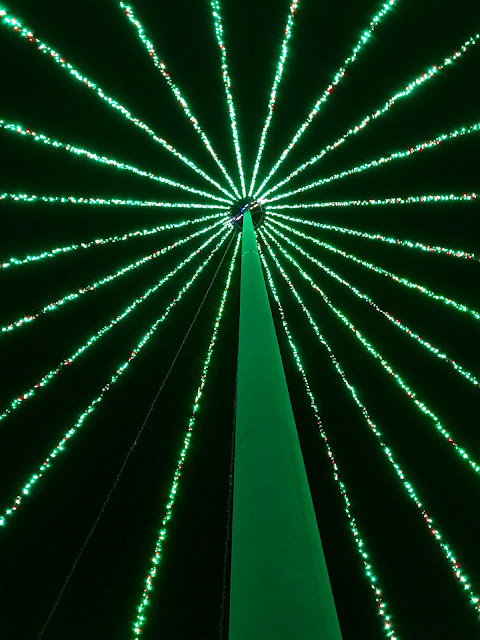 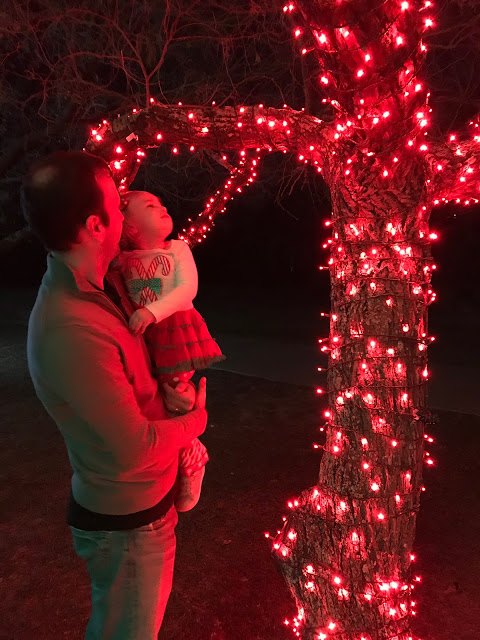 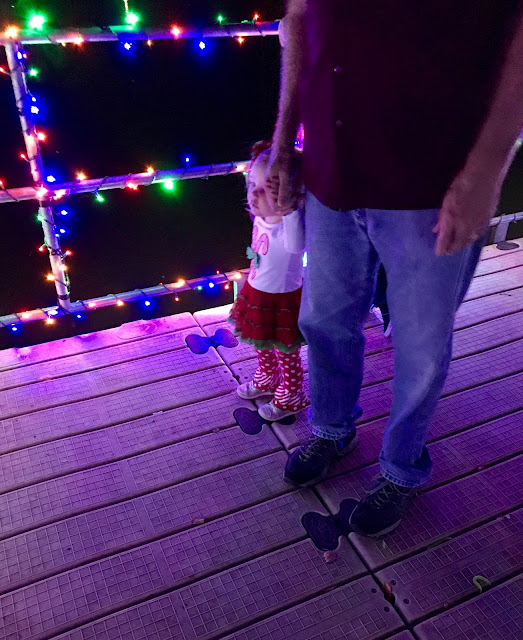 She loved some lights and decided that others were “scary.” I’m fairly certain that she wasn’t actually scared, but now that she knows the word, she likes to use it. 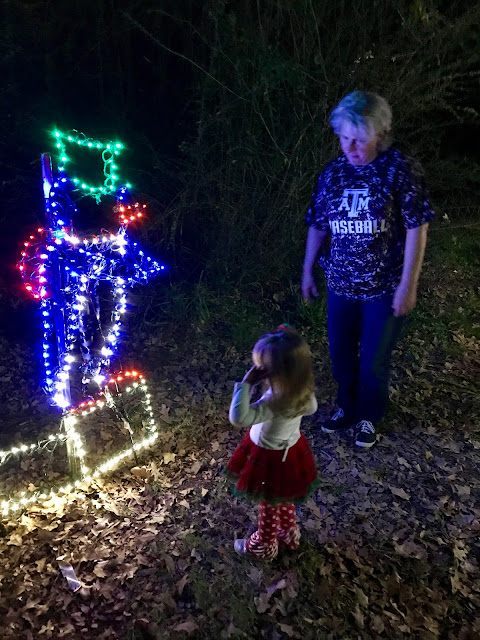 She loved getting to hold everyone’s hands and walk like a big girl through the park. I think holding Jojo and Pops’s hands were her favorite. 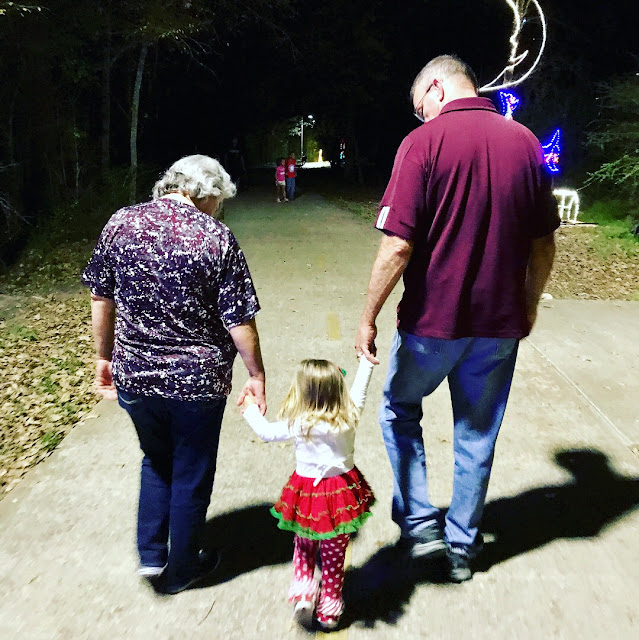 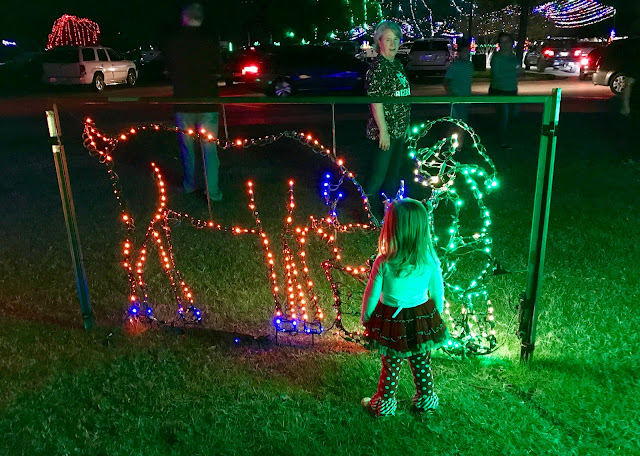 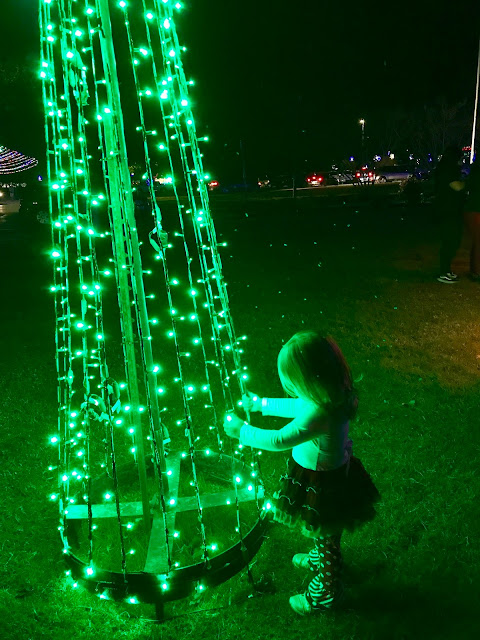 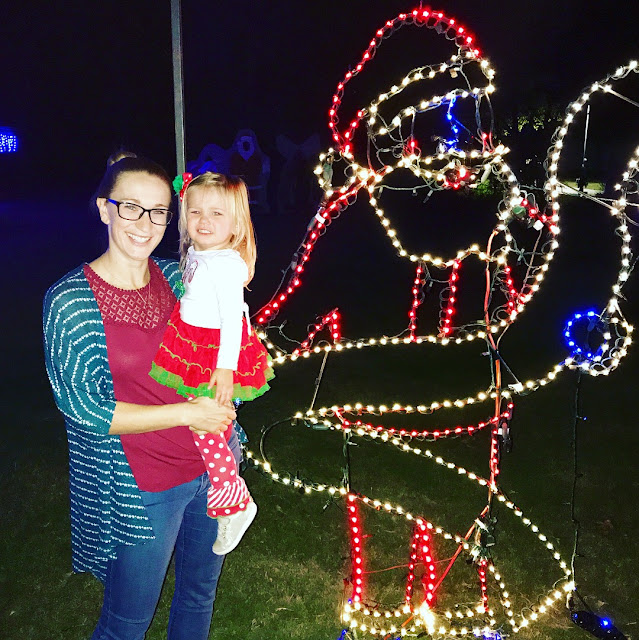 She loved the big tree so much that we had to go back by it on our way out. I’m definitely looking forward to taking her again on Christmas night! 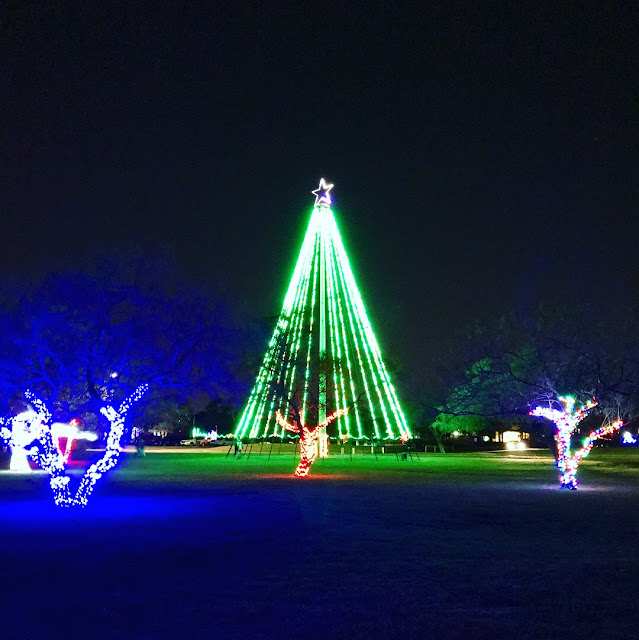 Sunday morning we had breakfast at First Watch…mmmm cinnamon chip pancakes! Then we just relaxed at my in laws! Chloe played outside with Jojo as much as possible in her bounce house. I read my book and rested my ankle. JP and Phil watched football. It was pretty much the perfect ending to an amazing weekend. I was bummed that this weekend had to end!!! The good thing is that the holidays have just begun. I know that every weekend will be amazing and we’ll get more time with our amazing family and friends.

I hope that everyone has an amazing holiday weekend! Now back to the daily grind!