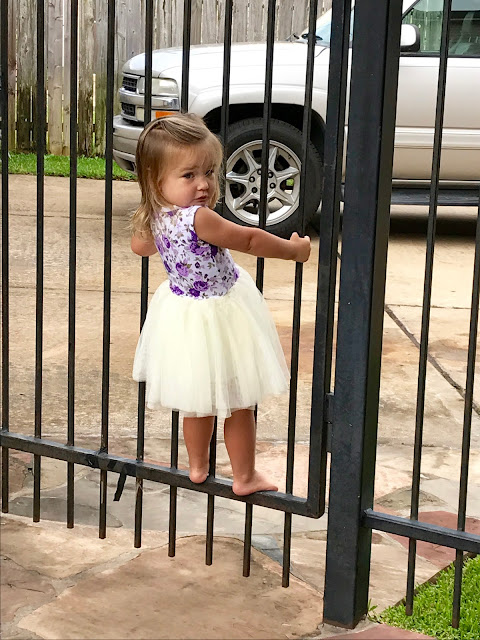 Oh man Monday. Monday morning has me giving smirks like that little girl up there and, I’m seriously dreaming of my mimosa flight from brunch on Saturday…but we’ll get there later. This morning I woke up to actual fall weather! It’s 51 degrees outside right now. If only this cool front could have come two days sooner. I could have used a beautiful, cool Saturday morning for my 10K this weekend. I haven’t run a race since May! The last race I ran was the Disneyland Tinkerbell half marathon. Since I ran Princess the last weekend of February, I was able to just keep up my running until Tink on Mother’s Day weekend. After that I kept running short distances, but summer really isn’t the best time for running or racing in Houston. In September after all of our travels, I finally started to get back on track with running 3 days a week consistently with long runs on the weekend. The last 10K I ran was back in March for the Rodeo Run 10K with Rachael!

This weekend Rachael and I decided to tackle another 10K. I created her training plan and was there to pace her to a PR! Our goal was to finish under 1:00:00. 59:59 would be perfect! So let’s take a look and see just how it went! 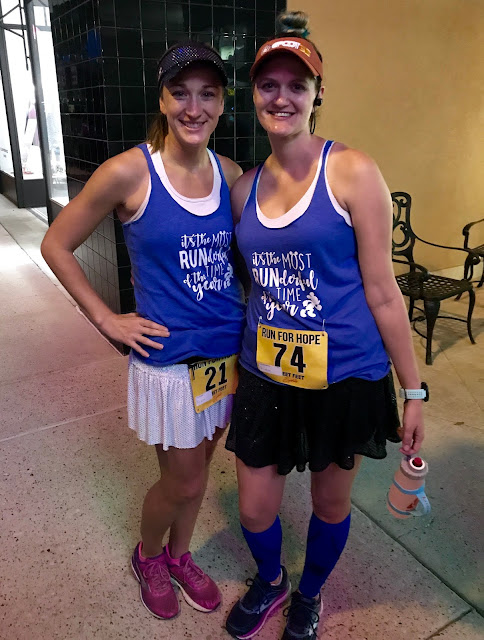 We woke up dark and early. 5:30am is my usual Saturday morning wake up time, so it wasn’t too bad. I spent the night at Rachael and Jojo’s so I didn’t have to drive an hour to the race since they were only 15 minutes away. The race start was supposed to be at 7:00am, so we planned to get there by 6:30 to have plenty of time to park, potty and get ready to go. Unfortunately when they said it started at 7:00, they meant the pre-race talking and whatnot, not the actual race. Waiting for an hour was kind of a bust, but it was a nice breezy 72 degrees which was nice for standing around. Not so great for running.

The race did start right at 7:30am. We were able to get a nice spot near the front, so we weren’t dealing with dodging around a bunch of walkers.

Mile 1 – 10:22 min/mile
The first mile went great. We started out slow and easy to get our legs going. The plan was to run about a 10:15 for the first mile and 9:30 for the remaining miles. That would average us out to the 9:40 average pace needed to to finish sub 1:00:00. A few seconds slower certainly wasn’t going to hurt us! It was definitely warm, but it didn’t feel too bad yet. The first mile few by pretty quick.

Mile 2 – 9:30 min/mile
We picked up the pace during our second mile and didn’t feel like we were straining. We were both still able to talk at this point. We had to dodge around a few people, but for the most part it was an easy mile.

Mile 3 – 9:41 min/mile
Mile 3 we were still doing okay! We slowed down just a tad, but were still on track for our finish goal. Our bodies were definitely warming up and the 96% humidity was starting to get to us. We grabbed some water to dump on our heads to hopefully cool us down a bit.

Mile 4 – 9:30 min/mile
We passed through the finish line at the 3.1 mile marker and kept on going for our second loop. The good part is that most people were running the 5K, so the course thinned out a ton for our second time around. The bad part is that the heat and humidity were starting to get to Rachael. I decided to start telling her a story to pass the time and keep her spirits up!

Mile 5 – 10:43 min/mile
The story started at the end of mile 4, so it continued on through mile 5. I told her all about my brother’s wedding which still hasn’t been featured on the blog yet! I’m waiting for all the beautiful pictures from the photographer. Anyway, mile 5 is where Rachael started to struggle. She told me at the end of mile 4 that she didn’t think she’d be able to keep going at the pace we were maintaining. We slowed a bit, but then again quite a bit more.

Mile 6 – 10:17 min/mile
At 5.25 miles, we were going pretty slow and I knew we needed to pick it up. I started running faster to see if I could get Rachael to catch up with me. I thought if I was ahead of her, she would want to push just a little faster. I saw myself creeping further and further away, so I had to make an executive decision: keep running the race race solo and push to finish or slow down and finish with Rachael. I knew Rachael would finish and at this point the sub 1 hour wasn’t going to happen, so I kept on. I picked up my pace to a 9:30 average and kept pushing on. Since the first quarter of a mile was quite a bit slower, it still averaged out over 10 minutes.

Mile 7 (0.2) – 8:57 min/mile
The last little bit I picked it up and really challenged myself. Why not? I kicked it into gear and finished strong! I finished in 1:03:30 and Rachael came in only 2 minutes behind me. She could see me most the the time and she said her goal was to not let me get out of her sight!

Overall, it was a great race. It was an easy, flat course and they were raising money for an amazing cause: Foster kids! 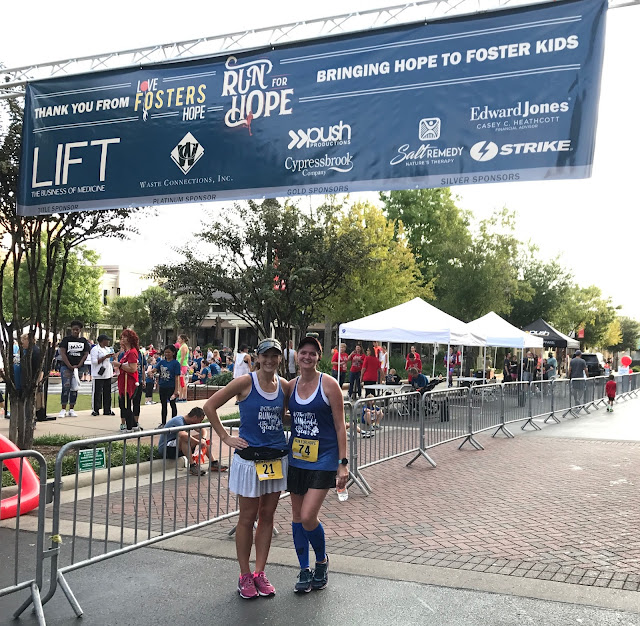 As soon as we finished, we toweled off our sweat, changed clothes and went to brunch! We went to Fieldings in The Woodlands and it was AMAZING! I started off brunch the way everyone should…with a mimosa flight! It was well deserved after all. 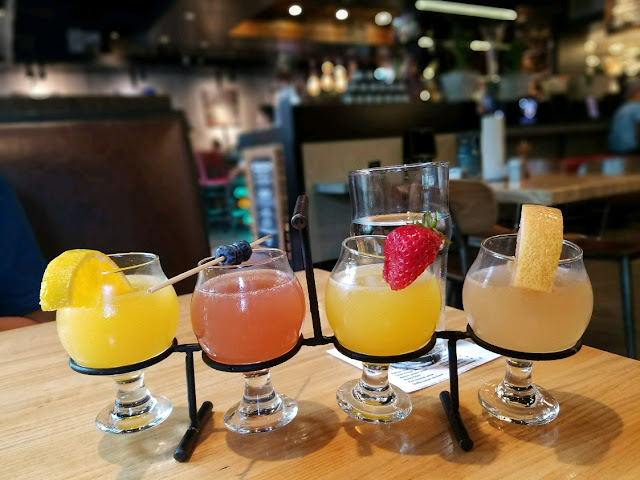 In case you were wondering, from left to right they were original orange, blueberry pomegranate, elderflower and grapefruit! The elderflower won first place with grapefruit coming in at a close second. Just looking at the picture makes we want it again!
The rest of the weekend was super chill. Of course, a cool front came in with some thunderstorms on Sunday morning. It rained crazy hard, but we still made it out the door in time for mass followed by the Knights fall craft fair! I got some awesome stuff for the house and another Lularoe dress. It was a win in my book.
I was definitely wishing the cooler air had been there for our race, but I’m at least glad that it wasn’t raining and we still finished with a great time. Now we’re looking for some December races to see if we can still get that PR! No matter what we’re still in training season. Next race is the Hot Chocolate 15K in January and then the Disney Princess Glass Slipper Challenge (5K, 10K and half marathon) in February! Here’s to hoping this fall weather sticks around and my running gets even better. 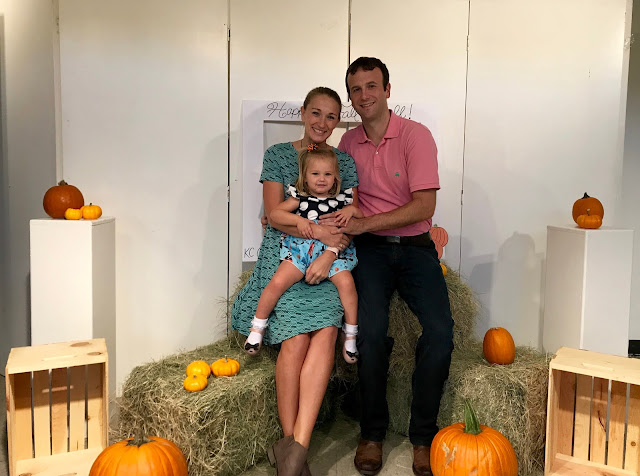 Have you run any fall races this year?
Has fall weather actually hit your city yet or is fall a mythical season where you live? It certainly is here!