I’ve started to write down Chloe’s birth story and I’ve realized that it is something that I want to remember forever. I don’t want to miss out on a single thing! My wedding day has become a fairly faint memory in just 5 1/2 years and I don’t want this to slip away. I’ve decided to split it up into a couple parts. Now remember, this is a birth story, so there may be some TMI. If you’re squeamish or don’t like hearing/reading about some kind of gross things then beware. (Don’t worry it’s nothing too gross 🙂 This may be a little long…

It all started Thursday, July 23rd. The day before had been my last day of work (thank goodness) and I was out and about trying to run a few errands and pamper myself before baby girl arrived. I got a pedicure, went to the mall to walk around and pick up a few things, and grab a late lunch. While I was eating lunch, I noticed that my back was killing me. Even while sitting and relaxing. It had started to bother me a week or so prior, but not nearly as intense as this. I finished up and walked around a bit and my back hurt worse. I decided just to hop in my car and drive home. The back pain continued all day and progressively got worse. I did prenatal yoga poses. I stretched on my labor ball. I sat on my labor ball. I put the heating pad on my back. After a few more hours, I texted my mom to see what she thought was up. I was told to get in a warm bath and relax to see if that helped. If it didn’t, call the doctor. Luckily Emily got home shortly after I got in the bath. She massaged my back and said that it was completely tense and my muscles wouldn’t let up no matter what she did. I got out of the bath and went downstairs to eat some dinner, then the plan was to call my doctor.

I called my doctor around 7:00pm and she recommended I come in just to be safe. Her thoughts were that it could be back labor or possible issues with my kidneys. So naturally, we went upstairs to take pictures before we left in case it was my last bump pic! We also grabbed all the last minute things to throw in the car and we were on our way! 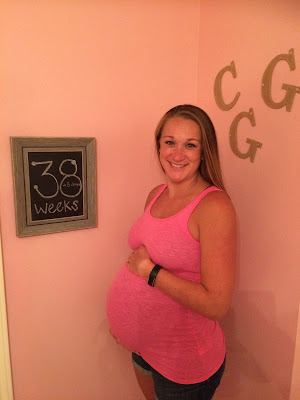 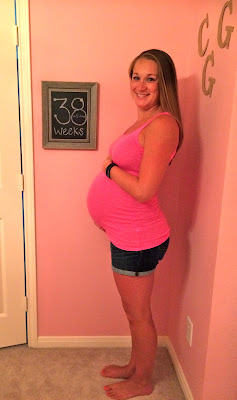 Emily made the comment that it was the calmest ride to the hospital ever. It really was. We had no idea what was going to happen. Would we be staying or going home? I was 38 weeks and 5 days, so Chloe was well done and could come at any time. 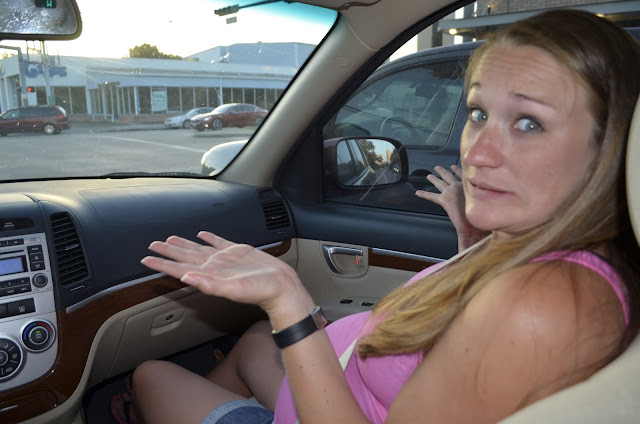 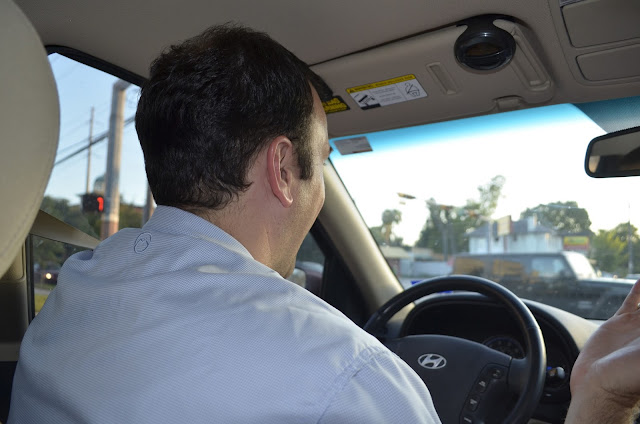 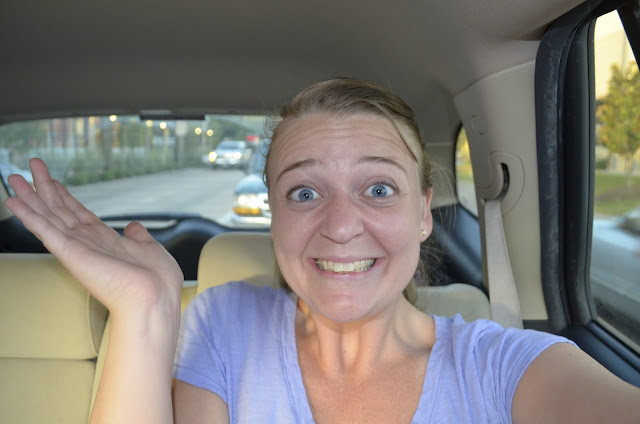 We got to the hospital and walked up to Labor and Delivery, then taken straight to triage. They got me in a sexy hospital gown, hooked me up to all the monitors and started checking all the boxes. It was definitely a nice trial run if I wasn’t going to stay!

I was having contractions, but nothing regular. I was still about 2 1/2 cm dilated and 75% effaced, so not much further than the previous Friday at my doctor appointment. It was kind of demoralizing because I was ready to meet my girl! After watching my contractions and Chloe’s response for about an hour, it was determined that I was in early labor. I was having back labor pains and my muscles around my spine were in constant contraction and not letting up. I was released and given a muscle relaxer to help me get through the night. I had another appointment the next morning to follow up and discuss what to do from there.

Maggie and Moose were so ready to meet their baby, but I told them they would have to wait a little longer… 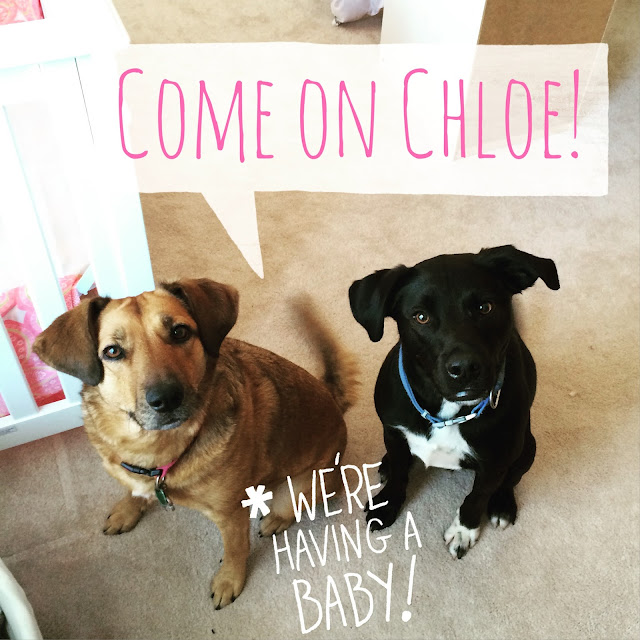 Friday morning (7/24) we went to the doctor. She said that I was actually 3cm dilated, 80% effaced and still progressing nicely on my own. Since my body and Chloe were doing everything necessary, she asked if I would like to be induced since I was in constant pain. Being induced wasn’t on my to do list, but my doctor said that I was a good candidate considering how nicely my body was working for me (aside from the back pain). Early labor can last for weeks and I wasn’t sure if I would be able to last that long! I decided to set a date for the following Thursday, July 30th which would still give me time to go into labor on my own. Unfortunately, Thursday was crazy busy, so we moved it up to 7:00am on Wednesday, July 29th! The rest of the day, I spent with even parts relaxing and walking. I was determined to walk this baby out! Later Friday evening I lost my mucus plug! My body was still working hard to have a baby, so there was a possibility she would come on her own.

Saturday (7/25) we went down to my parents for some pool time! My mom recommended keeping myself busy so I wouldn’t think about everything so much. I swam some laps, relaxed in the water and just tried to give myself a break. Around lunchtime, my relaxing day turned into panic. Chloe had always been a very active baby, like rarely stopped moving and would constantly reassure me that she was still there. But this day, her movement just stopped and I about LOST it. I texted my mom and she told me to drink some ice water and lay on my left side. In an hour, I thought I may have felt her move a little, but that was it. My dad and JP were getting really worried about me, so dad texted mom who called me. It sent me over the edge and I started bawling. I was told to take a shower, drink something sweet, lay down and call my doctor if I didn’t feel anything after an hour. I ended up feeling her move and felt a little relieved because she was still not moving a lot. During this time, I was also having contractions. They weren’t consistent though. Roughly 5-15 minutes apart with moderate intensity. I decided to take a short walk to see if they got worse. Instead, they went away. Boo prodromal labor! With all the stress of the day, I was ready to just see my baby. Everything ended up being okay in the end, but what a day! It turns out that Chloe dropped that day which is probably why I wasn’t feeling her.

Sunday (7/26) was a much more relaxed day. I met up with some of my girls, Alison, Caitlin and Rachael, for brunch and shopping at City Centre. We had crepes, walked around a bunch, window shopped in Anthro and Kendra Scott, and ended at the macaroon shop! It was such a nice day compared to the day before! I was still in pain, but girl time gave me several hours of activity to keep my mind off of everything going on. 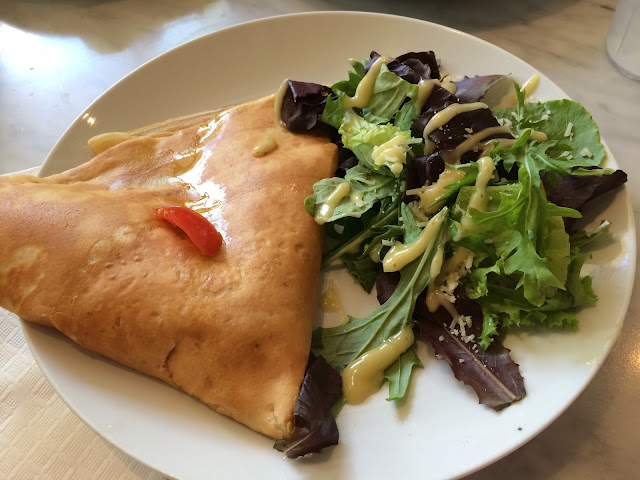 Monday (7/27) was pretty anti-climactic. I cleaned several things in the house, ran a few errands and relaxed.

Tuesday (7/28) was going to be my last day pregnant no matter what! Ideally, I wanted her to come this day! Then we would both have been born on the 28th! I power cleaned the kitchen, got some work done on my computer, watched birthing videos on Netflix and after lunch Emily came home to spend the afternoon with me. She knew how anxious I was and I’m pretty sure she was anxious herself! We played Scrabble while watching Big Hero 6 and I sat on my ball the whole time. My back was killing me and I wanted to take my mind off of it! For the record, I won Scrabble. And we used every single letter. #winning 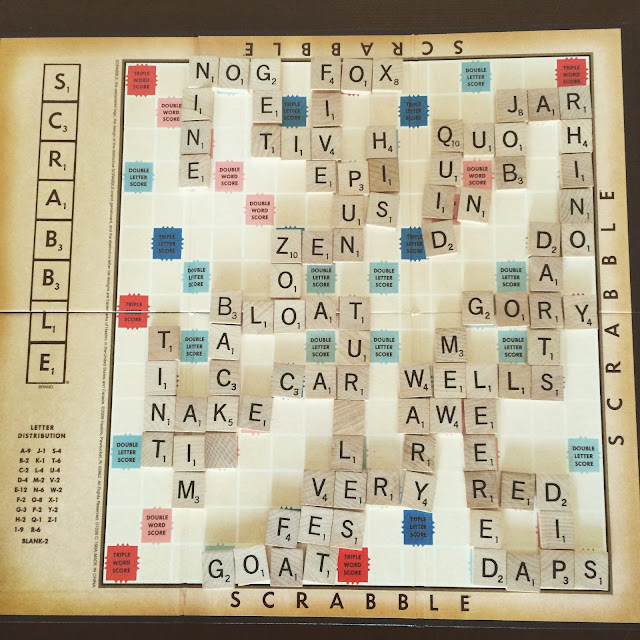 After our game, Emily decided to help me out by working on opening up my pelvis. I had to take a picture because it looked like she was trying to catch my baby or something since my belly is so big! 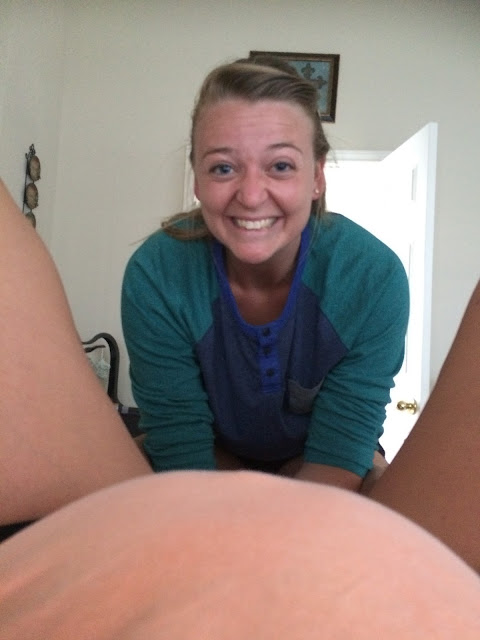 We ended the day with a delicious meal at Dolce Vida, an authentic Italian eatery, with JP’s mom, aunt and uncle. I had Margarita pizza as you can see! To top it off, JP took Emily and I to Sonic for peanut butter Oreo shakes! 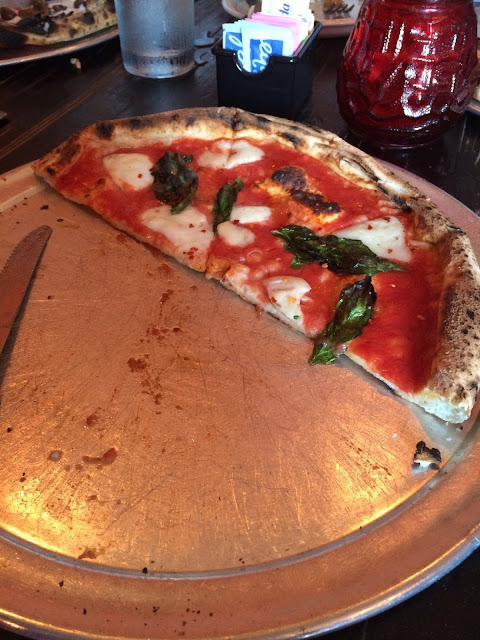 Once we got home, it was time to go to bed because we would be waking up at 5:00am the following morning to get ready to meet our baby girl!

To be continued next week…