It’s time for a race recap! As a runner, race recaps are very important to me and so much fun for me to write. This one has its ups and downs. This year’s Disney Princess half was my 18th half marathon since I started running races in 2009. It’s also very likely the last race I will “run” this year. That is so bitter sweet for a runner to say! I have an incredible amount to look forward to and a busy year ahead of me, but I was hoping that running was going to be a part of my pregnancy into at least the beginning of the third trimester. God had some other plans for me and decided that I needed to slow down…a lot. {Lost? Story of my ankle injury here!} Despite my injury, I was able to get out to the Disney half and live it up! Here we go…

Half marathon day started long before the sun came up! Our alarms went off at 3:00am and to say it wasn’t very welcome is an understatement. But it was for the Princess Half Marathon, so it was totally and completely worth it! We got ready quickly and were ready to catch our bus with pre-run snacks in hand! 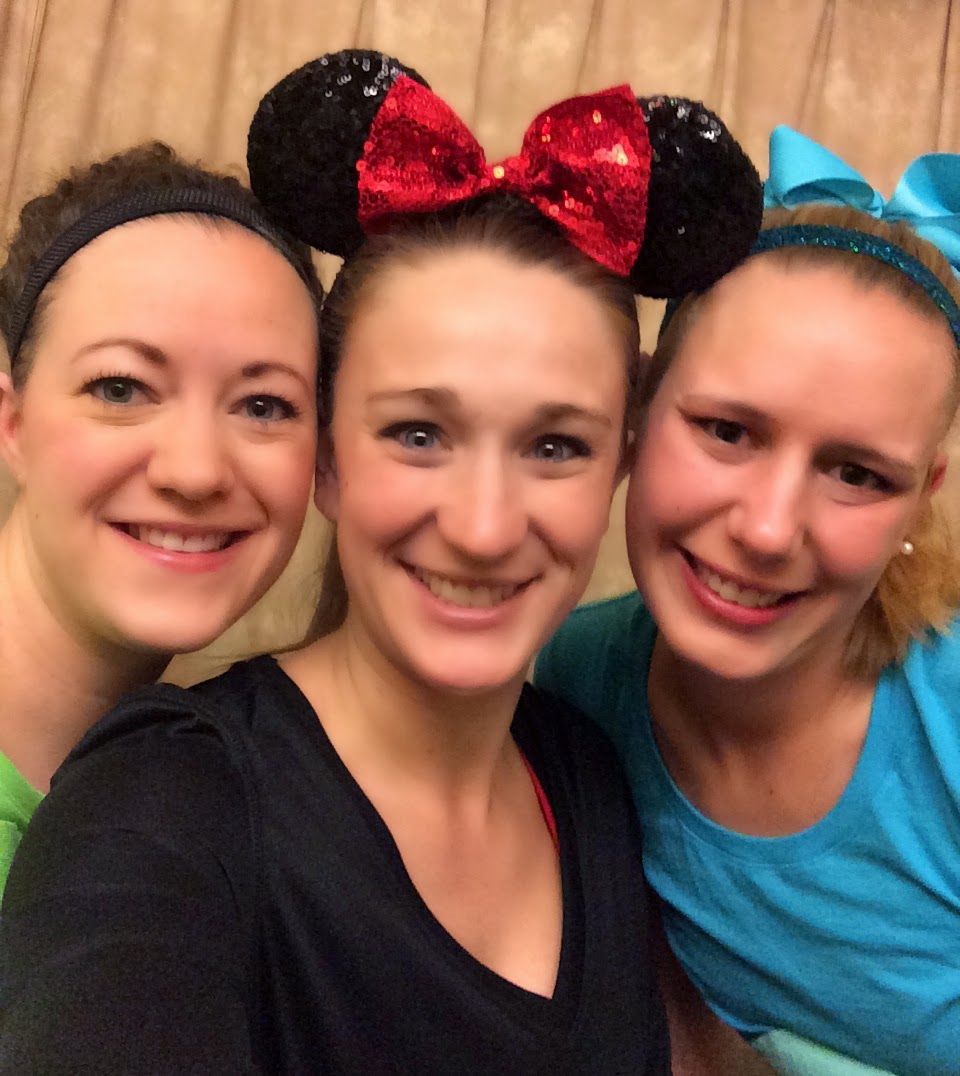 But first, let me take an obligatory sleepy group selfie. We get one every year on race day. Something about waking up at 3:00am and dressing up like a 6 year old really gets you going! Check out those awesome tired eyes! After bit quiet bus ride, we were finally able to start waking up a bit! 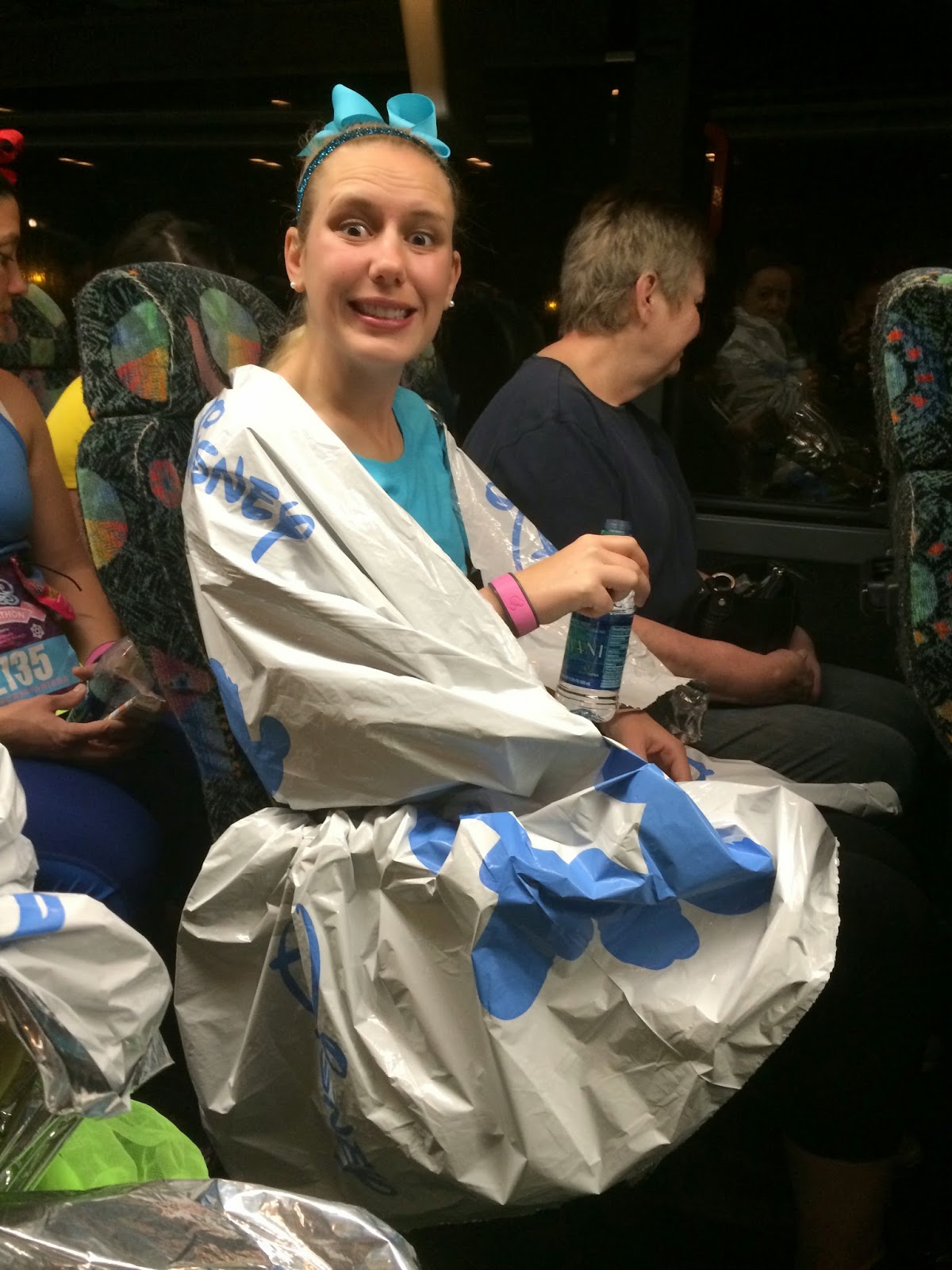 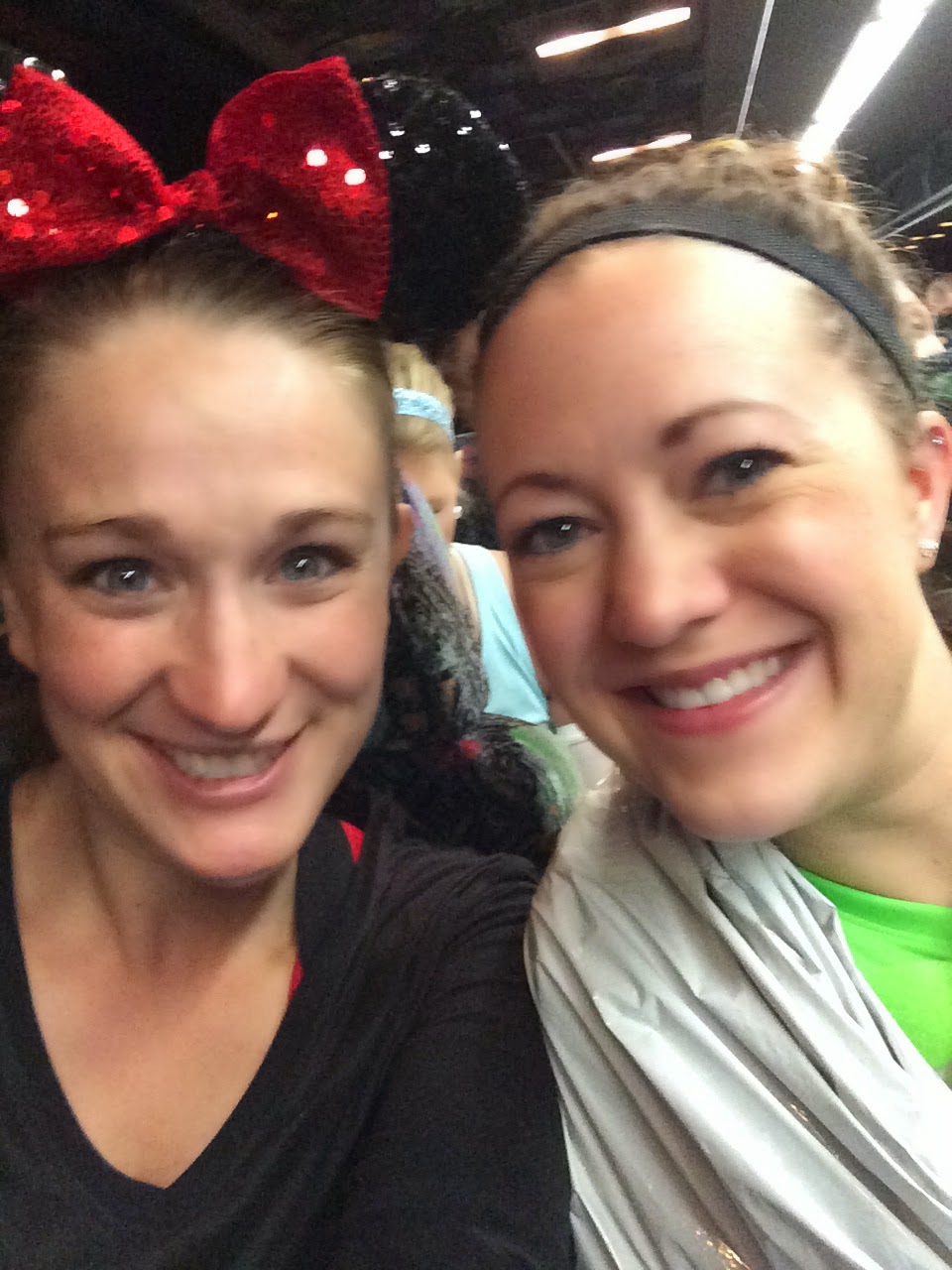 After the bus drops us off, the first stop is always pot-o-potties! A very important stop indeed. For runDisney races, always go past the long lines at the front and head towards the back corner. There are more pots and shorter lines! Or maybe don’t do that…I don’t want longer lines to wait in next time around 🙂 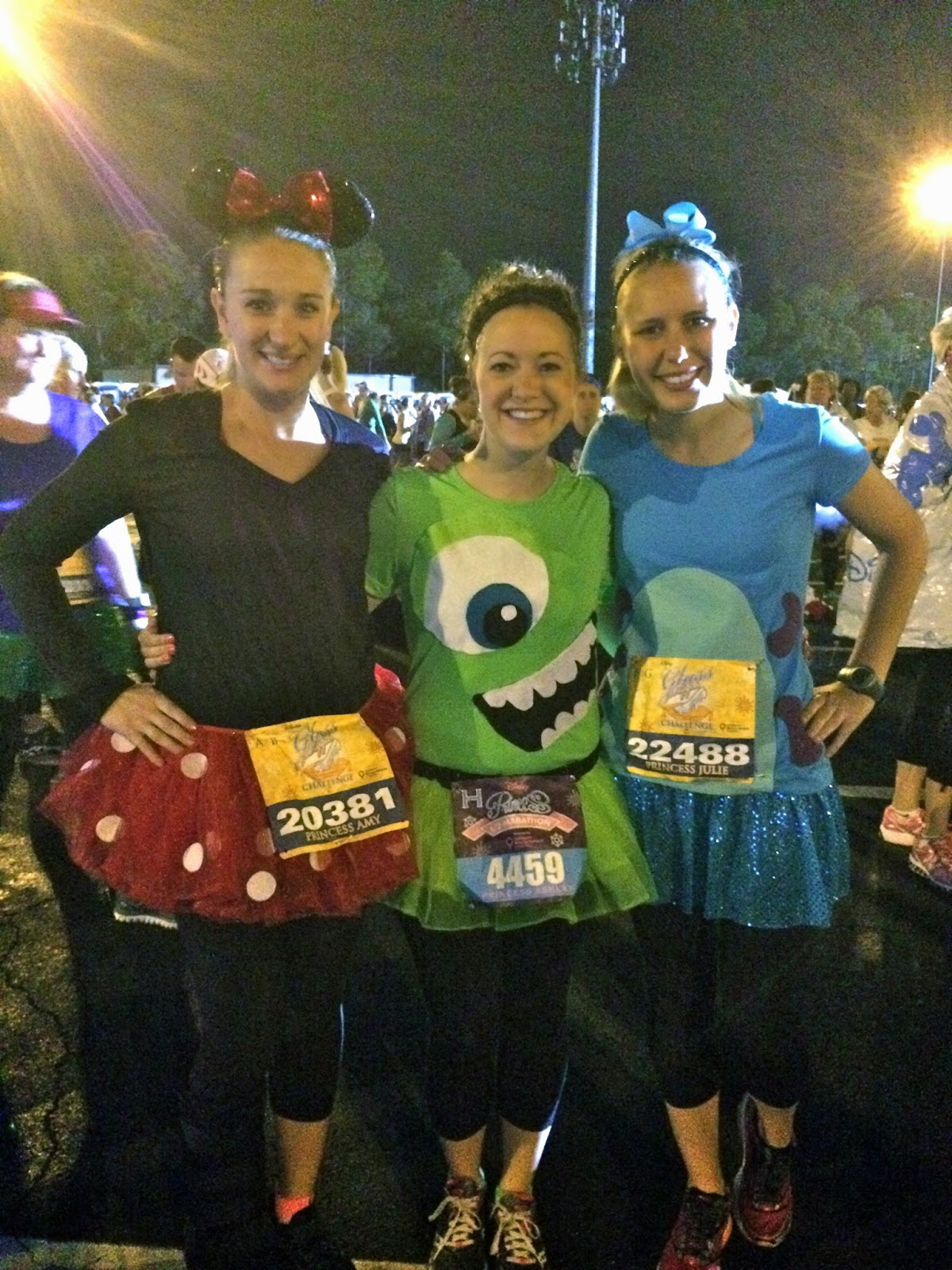 Clearly others know about our trick though because what are the odds that Rachael would end up in the same line as us! That worked out well because I was about to text her to meet up with her in Corral G! Fate!

We then started the trek to the corrals. It’s about a 3/4 mile walk or so from the finish area, which is where we were dropped off,  to the corral start area. It’s a nice way to wake up and start warming up your muscles. Luckily it wasn’t too cold this morning otherwise the walk is miserable! 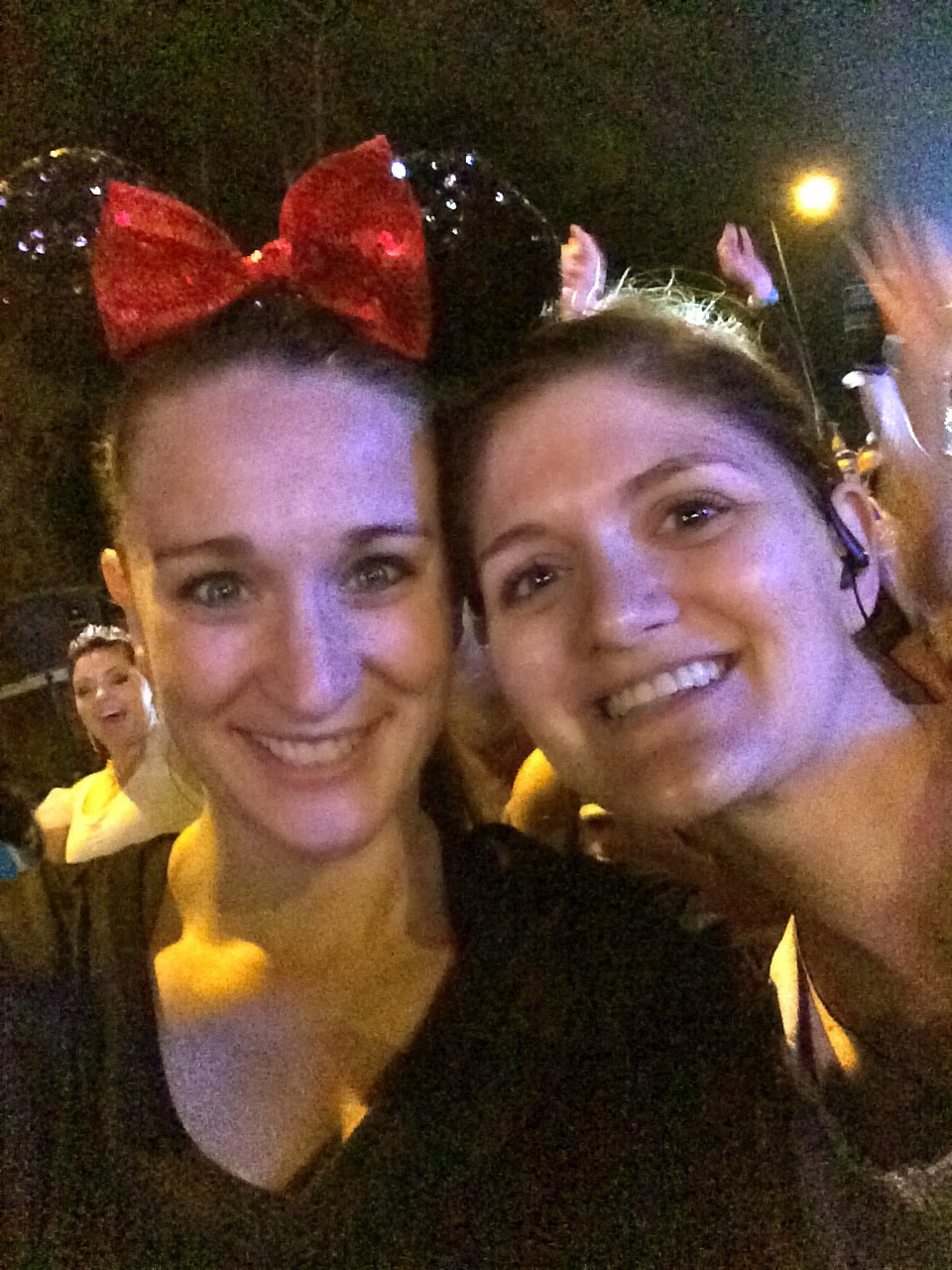 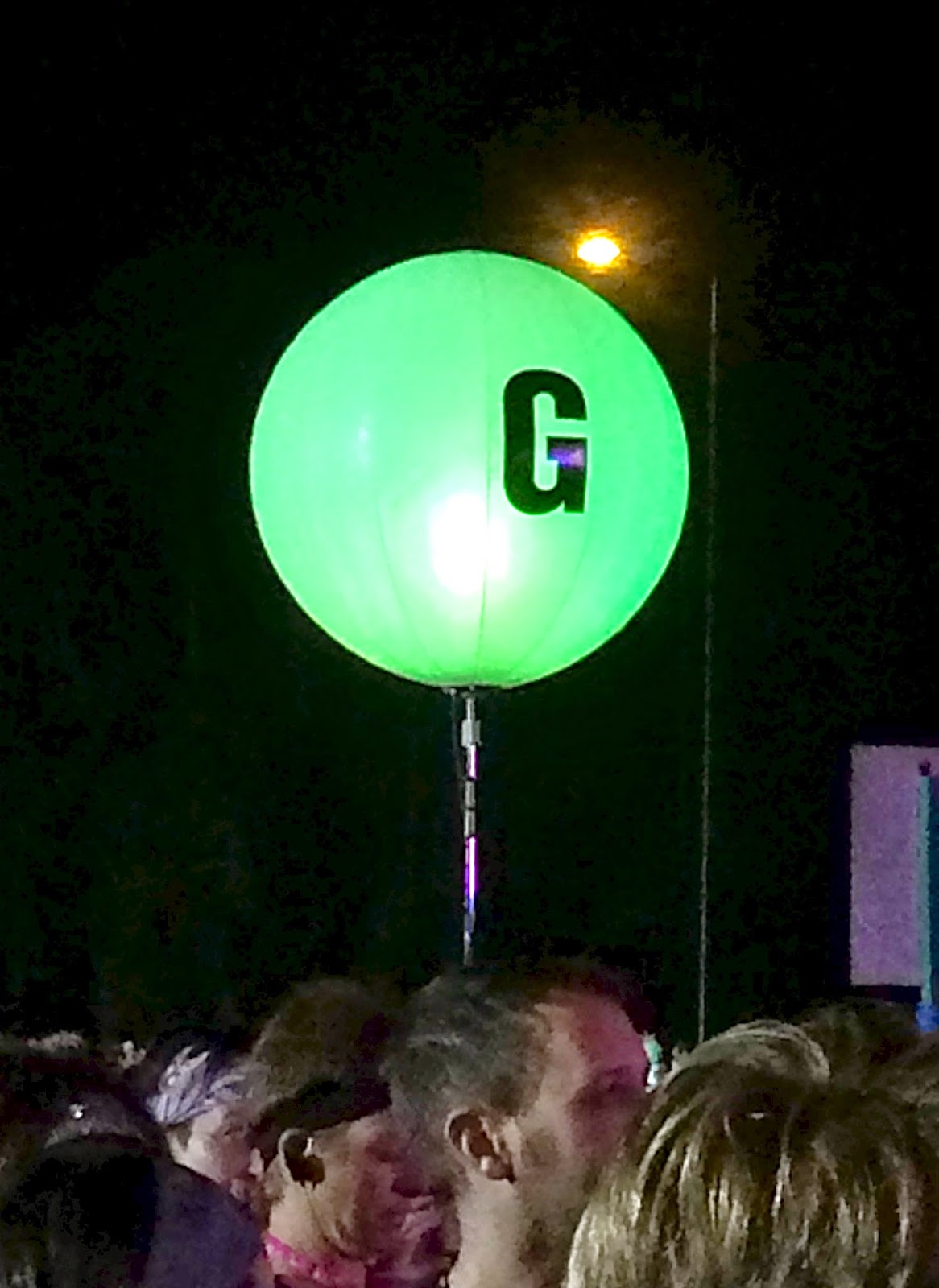 I decided that instead of waiting around in Corral B by myself, I would start in G with Rachael. G is for Gougler after all! We were able to get warmed up, stretch and hang out while we waited for our start. At 5:30am, the race had begun! Since we were in G it only took about 15 minutes for our corral to head out on our way across the start line! 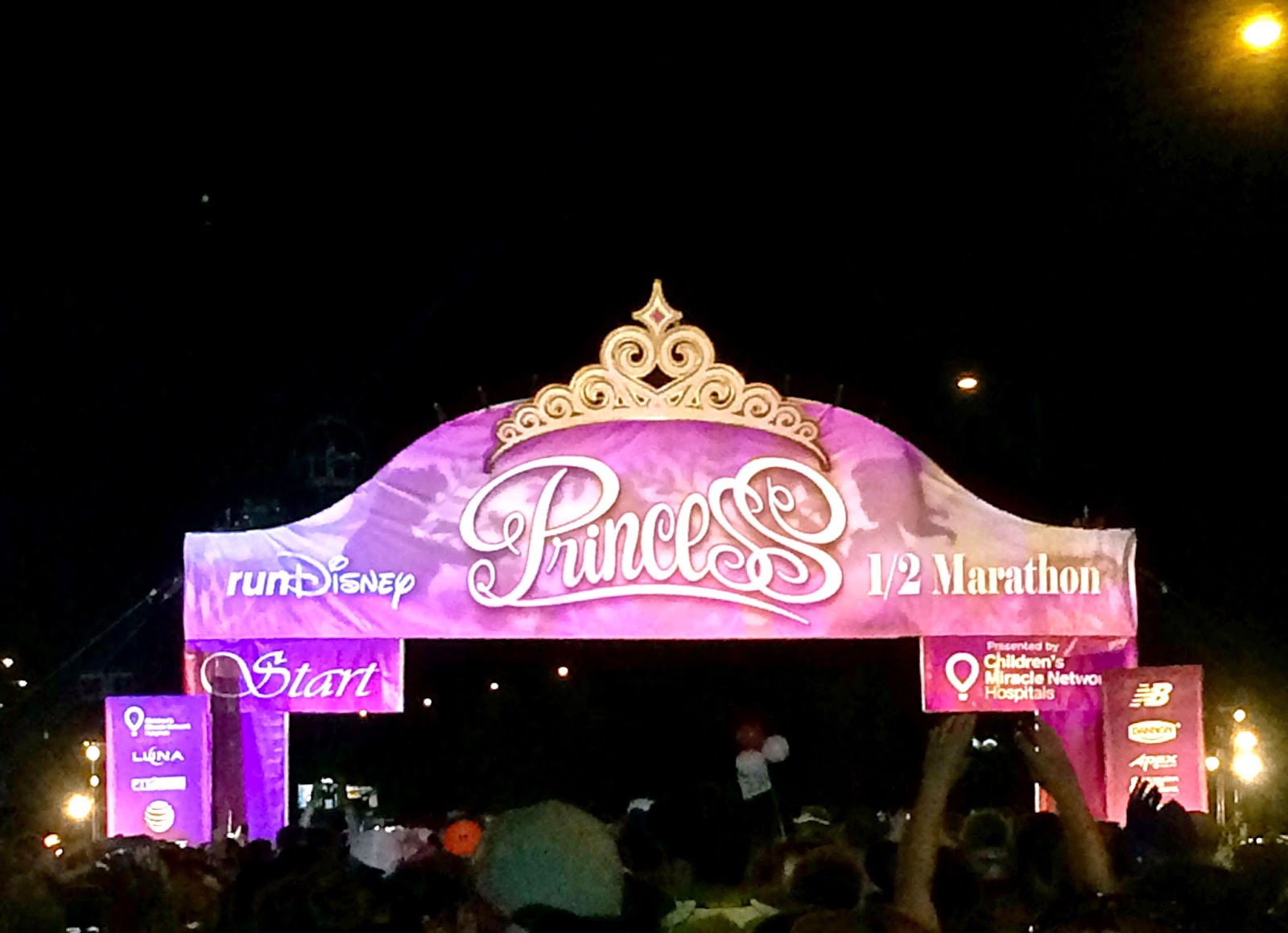 At this point, you’re probably a bit confused and wondering why I’m up and ready to run a half marathon when my right leg is in a boot from an ankle injury the weekend before! Let’s just say that I had no intention of running at all. Or walking 13.1 miles either. I really wanted to experience the half with my friends, get the race started and gracefully bow out after a mile or two. And to be honest, I wanted my medal…and post race snacks! 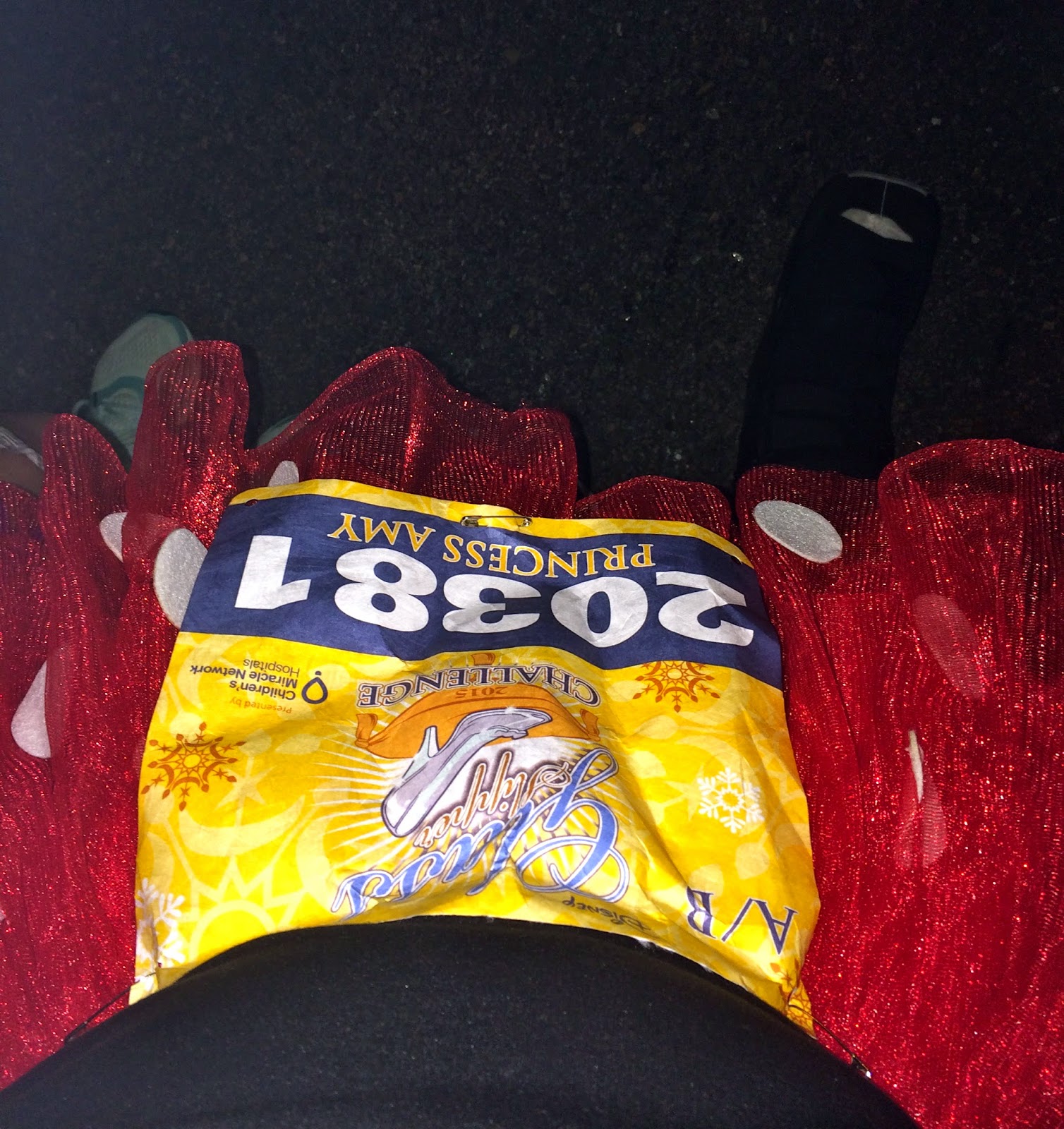 Once I was on my way, I found a solid steady rhythm and was able to stick to it. To be honest, crossing a start line walking was the weirdest sensation. Everyone was taking off and I went from a casual walk to a power walk. Not quite the exciting start I usually get from a race. Luckily, what came next made this race one of the best. The encouragement I received from other runners on the course was amazing! I had so many people out there cheering me on as the passed and telling me what an inspiration I was. Y’all, melt my heart. I definitely teared up a time or two because of the encouraging words I heard from these awesome women…and a few men!

Story time…there was this one woman that completely sticks out in my mind. She came up from behind yelling, “Go Booty! Go Booty! Go!” I thought it was adorable and it totally cracked me up. As she approached me her timer beeped indicating it was time for her walk interval and she started chatting with me. I told her what happened and she just gushed about how she was going to run for me and that I was inspiring her. I told her to think of me any time she got exhausted or wanted to give up to give her the push she needed. She was completely genuine and made me feel so awesome for being out there.

I had promised the girls and JP that I would pull over and bow out of the race at the first aid station. But it came quicker than I thought and I was really enjoying myself. So knowing I’d probably be scolded, I opted to continue on to the next one around mile 3! I’m so glad I did for two reasons: 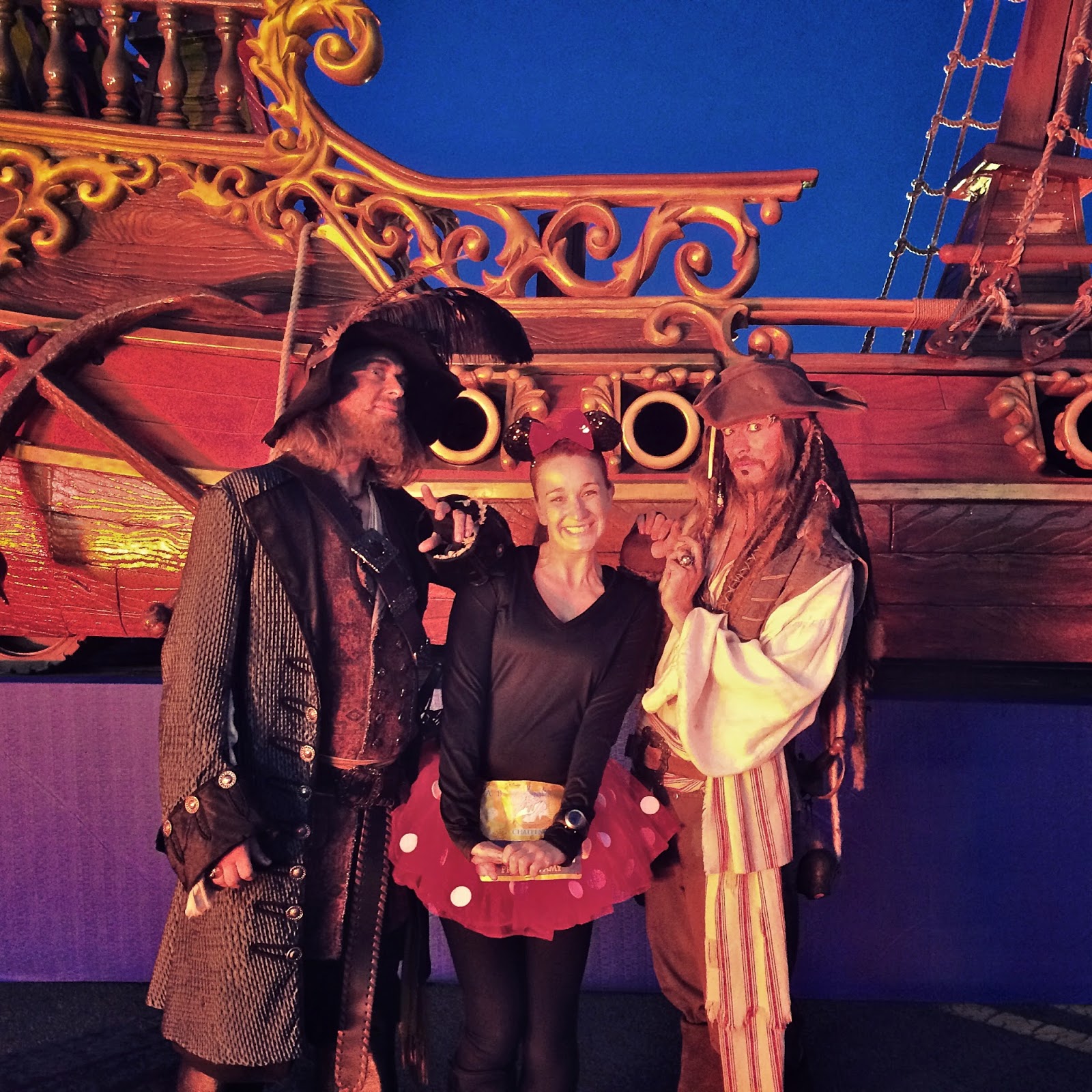 Pirates!!! They’re always the first picture spot, but I never stop at them due to the long line. Well guess who wasn’t in a rush whatsoever? This girl! I hopped off the course and waited in line for probably about 10-15 minutes. It was completely worth it. I met some other awesome princesses in line that cheered me on! Since it was a longer wait, I really got to talk to them and hear their stories and racing experiences. I love talking to runners about racing!

After they snapped my pic, I was back on the course and power walking was in full force. I got excited as we came to the Magic Kingdom car entrance because I got another picture opportunity! 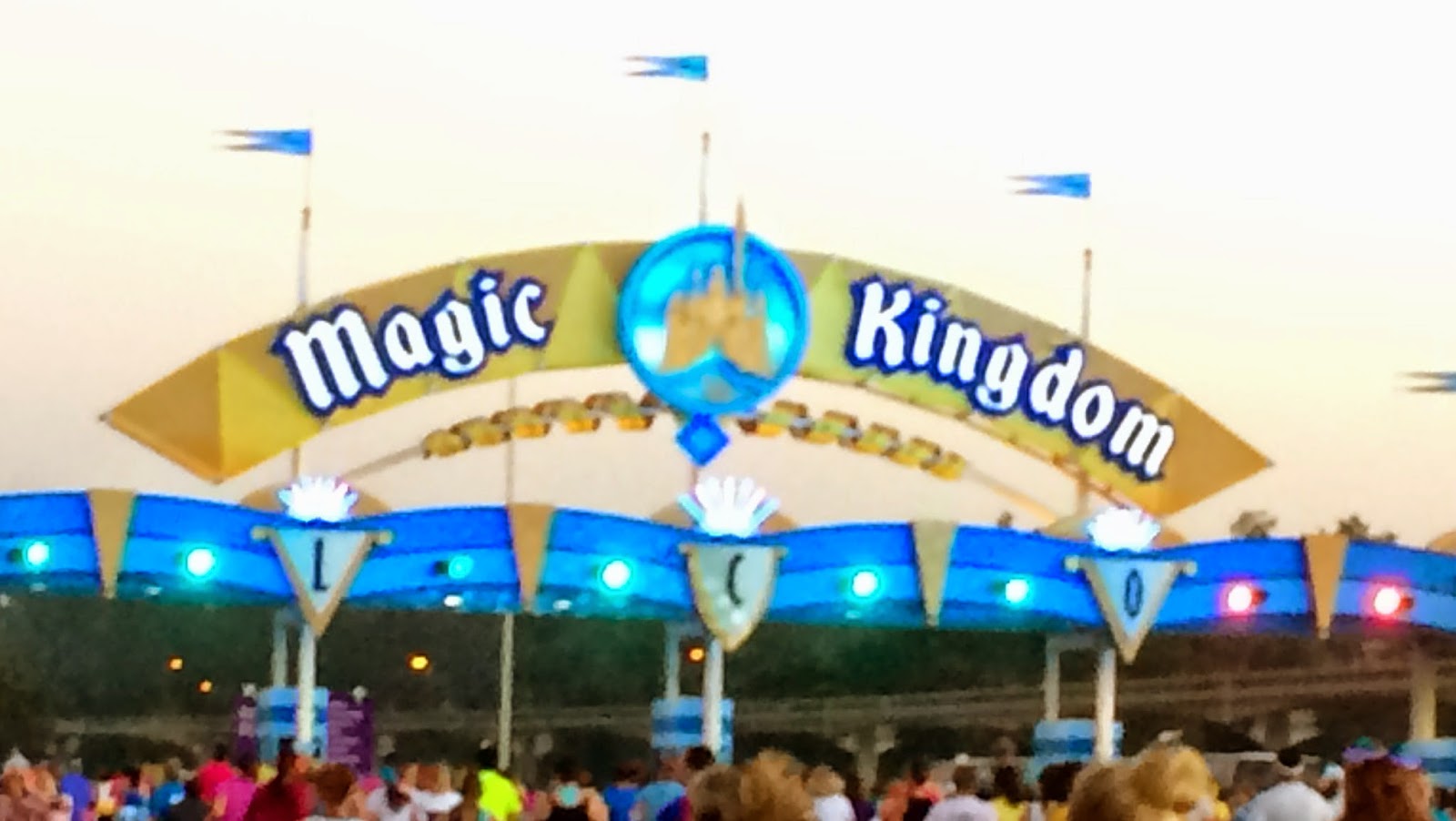 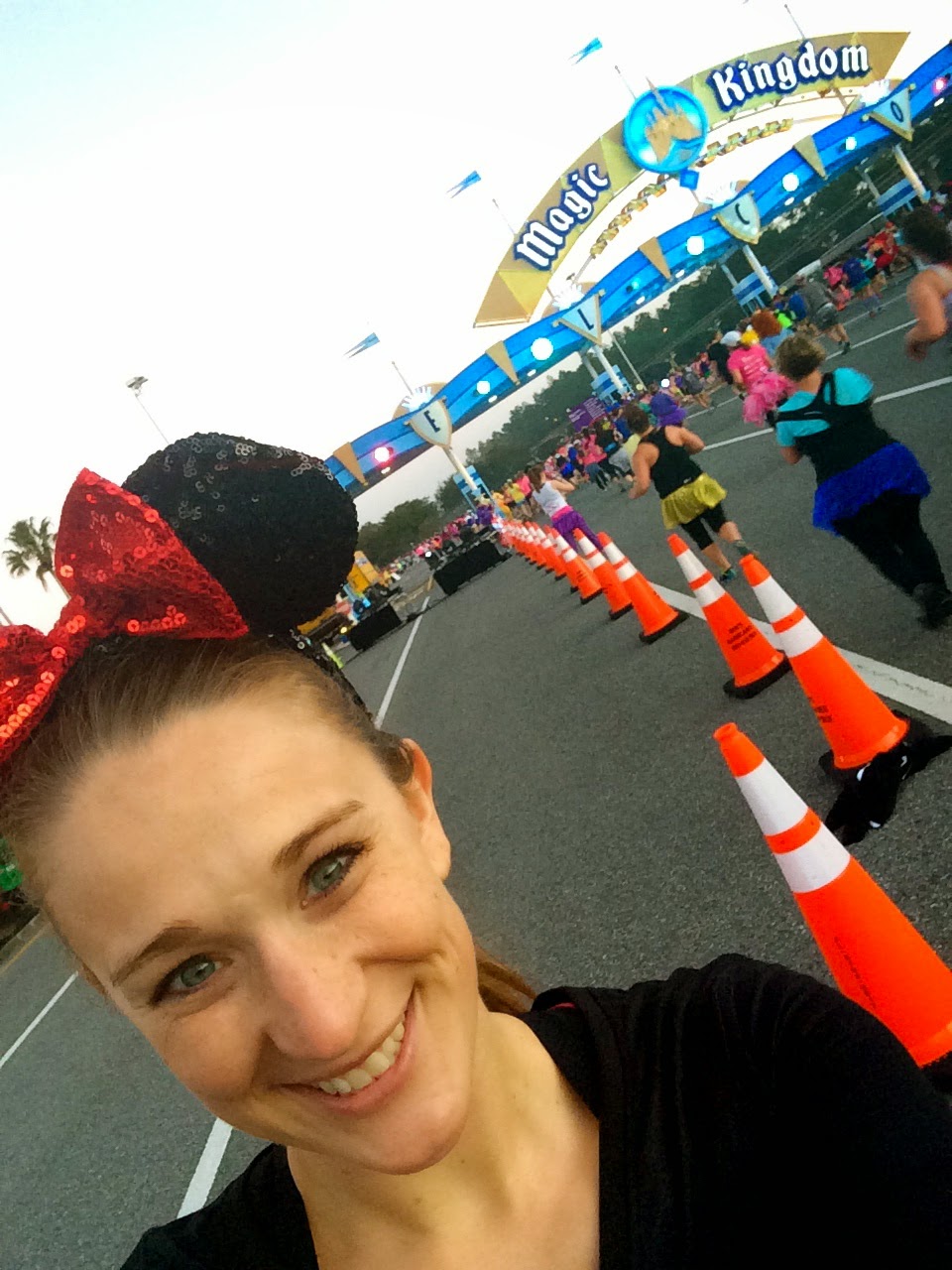 Shortly after I passed the entrance, I came to the second water stop and aid station. I swerved over to the side and told the medical staff that I was gracefully bowing out. Three miles was more than I was supposed to do and I got some shouty cap text messages scolding me for going further, but it was worth it to me. It’s all about the experience right?

The aid volunteers gave me a blanket and told me that they just had to wait for the final runners to pass by and we’d be picked up by the vans and taken to the finish. It was about a 20 minute wait and I was able to chat with another princess that couldn’t continue on due to severe shin splints. She had been crying when I arrived, and if I had been in her shoes, I would have been too! I started this race with the intentions of not crossing the finish line. It was by 18th half marathon and my first DNF {did not finish}, but a DNF is better than a DNS {did not start}. I was able to talk to her and hopefully cheer her up a bit. I was in a positive, happy mood and I hope that I could send some of that her way!

Once the van came and picked us up, it was just a few minutes before we were at the finish line medical tents. As we exited the van, there were tons of volunteers and medical staff yelling and cheering on the 5 princesses that exited the van. Their enthusiasm was contagious and they made us feel like champions just for being there! I chatted with a few of them, told them about my story and they were beyond supportive. They placed a medal around my neck, made sure I was warm, gave me my snacks and told me to take multiple waters and Gatorades. Before I left, the princess I was chatting with at the aid station thanked me and told me that if I hadn’t turned up that she would probably still be in tears. Above all, that made my race day. 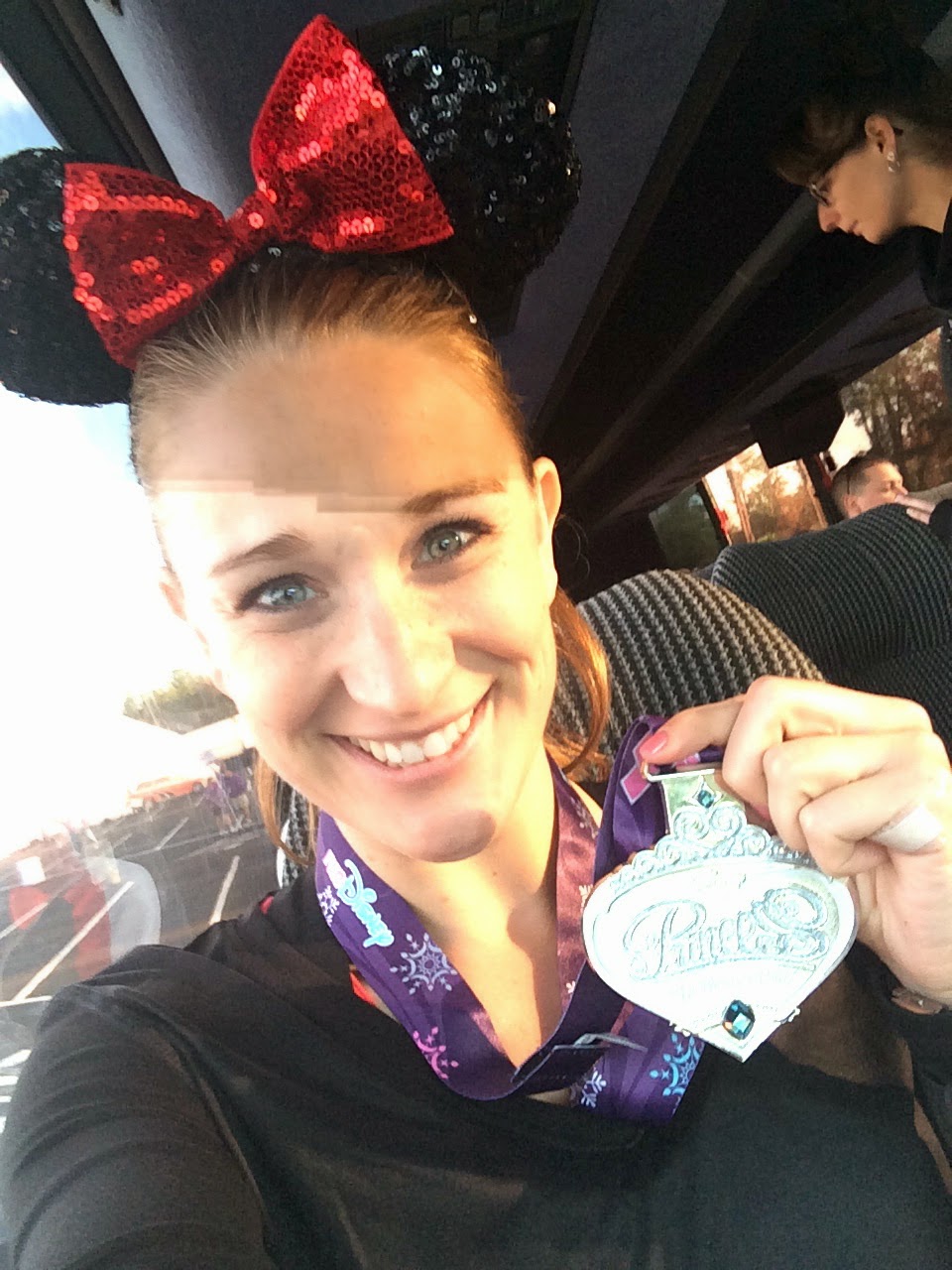 Though I was about 10 miles short of a half marathon, it was an amazing race experience. Disney knows how to do it right. They have an amazing volunteer base and the medical team on hand is knowledgeable, friendly and fun! I didn’t get to cross my 5th Disney Princess half finish line, but I did cross my 5th start line. I don’t feel like I quit or gave up, instead I was a rock start for starting to begin with. I’m proud of my determination! Now it’s time to grow this little baby, rest and heal my ankle and hopefully my 2016 running season will be awesome!
Time for a quick brag on my girls! Rachael finished the half marathon despite walking the 5K and running the 10K and half on a fractured foot! Ashley finished 6 minutes faster than her race time in 2014. And Julie finished faster than last year which is so awesome because she ran the 5K, 10K and half marathon! To say I am proud of these women would be an understatement! I’m so lucky to have them in my life so we can cheer each other on and push one another each and every day!