WARNING: There are some pictures of my severely swollen and bruised ankle in here. If things like that make you queasy or you just don’t like to look at them, then this post isn’t for you! Personally, I love this kind of stuff. It’s not as pleasant when it’s actually you it’s happening to. But I still like looking at the pics!

So it was brought to my attention that I still haven’t actually told y’all about what happened to my ankle. I know I referenced it several times during my Disney recaps, but other than posting on Facebook the day it happened, I haven’t said much.

How I injured my ankle.

I woke up Valentine’s Day morning and got ready to head out for a run, and JP decided that he wanted to go with me. We started out heading down Montrose towards the Bayou trails. As we were getting started, I realized that I kind of wanted to run alone and just think. JP was perfectly okay with this because I was doing 6 miles and he just wanted to do 4. When we got to the Bayou, I took a left towards Memorial Park and he went right towards downtown. We planned on meeting back at the house and then grabbing breakfast together at Whole Foods before spending the day at the zoo! Unfortunately, our day took a turn for the worst.

During my run I actually felt pretty great. My pace was a bit quicker then it had been, but I was wishing I had worn a more supportive bra. TMI? Sorry, pregnant runner problems! That seemed to be the biggest problem during my whole run! Until the end of course.

I was coming back up Montrose and was only about a quarter of a mile away from my house when the weirdest thing happened. I caught up to a couple running in front of me and decided to just slow down instead of cooing around them. As we were going past some lawn guys blowing grass off of the sidewalk, I went down. Hard. It was the most bizarre thing in the whole world. I didn’t trip on anything. The sidewalk wasn’t uneven. There was nothing in my way. My right ankle just rolled and I hit the pavement on my left knee and my hands.

My Knights in shining armour.

The couple running in front of me were amazing. They stopped to see if I was okay and then helped move me to the other side of the sidewalk to get me further away from the street. Of course, I didn’t run with my phone the one time I actually needed it! They let me borrow their phone to call JP who was shocked and panicked that I was calling him. Luckily I was very close and it only took him a few minutes to come get me. The couple helped me up and pretty much carried me into JP’s car. I wish that I would have thought to get their names and number to contact them and thank them for all of their help! They also kept me calm while waiting for JP as my ankle was swelling to the size of an orange. Ready to see it? 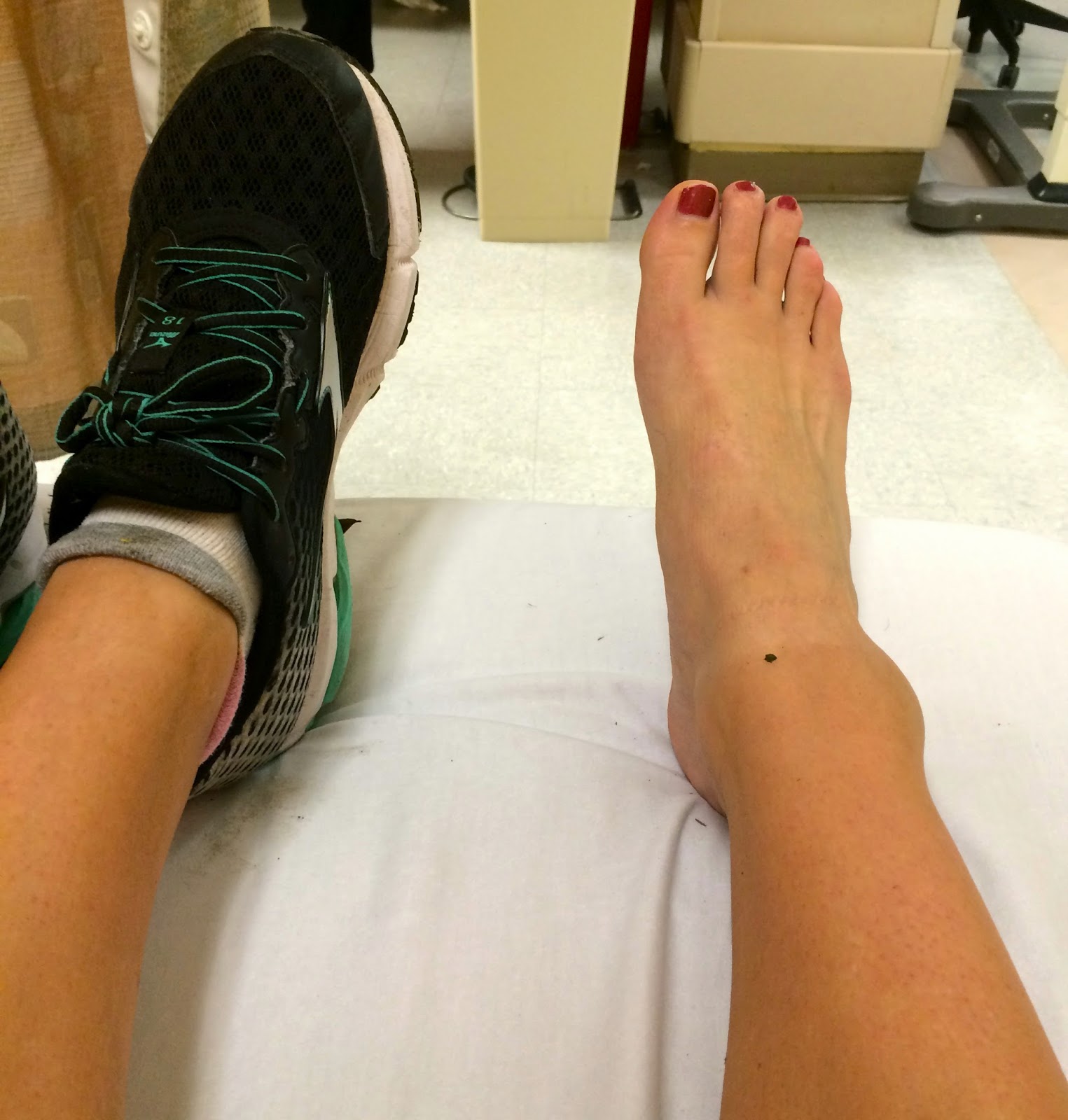 Oh yeah, lovely right? JP and I went to the Methodist Hospital ER and had a fairly decent experience considering it was an ER visit. Since I’m a registered patient, I’m already in their system so it didn’t take long for them to check me in and get me to a bed. My nurse was their fairly quickly and we only had to wait a little bit longer for the doctor to come by and check me out. 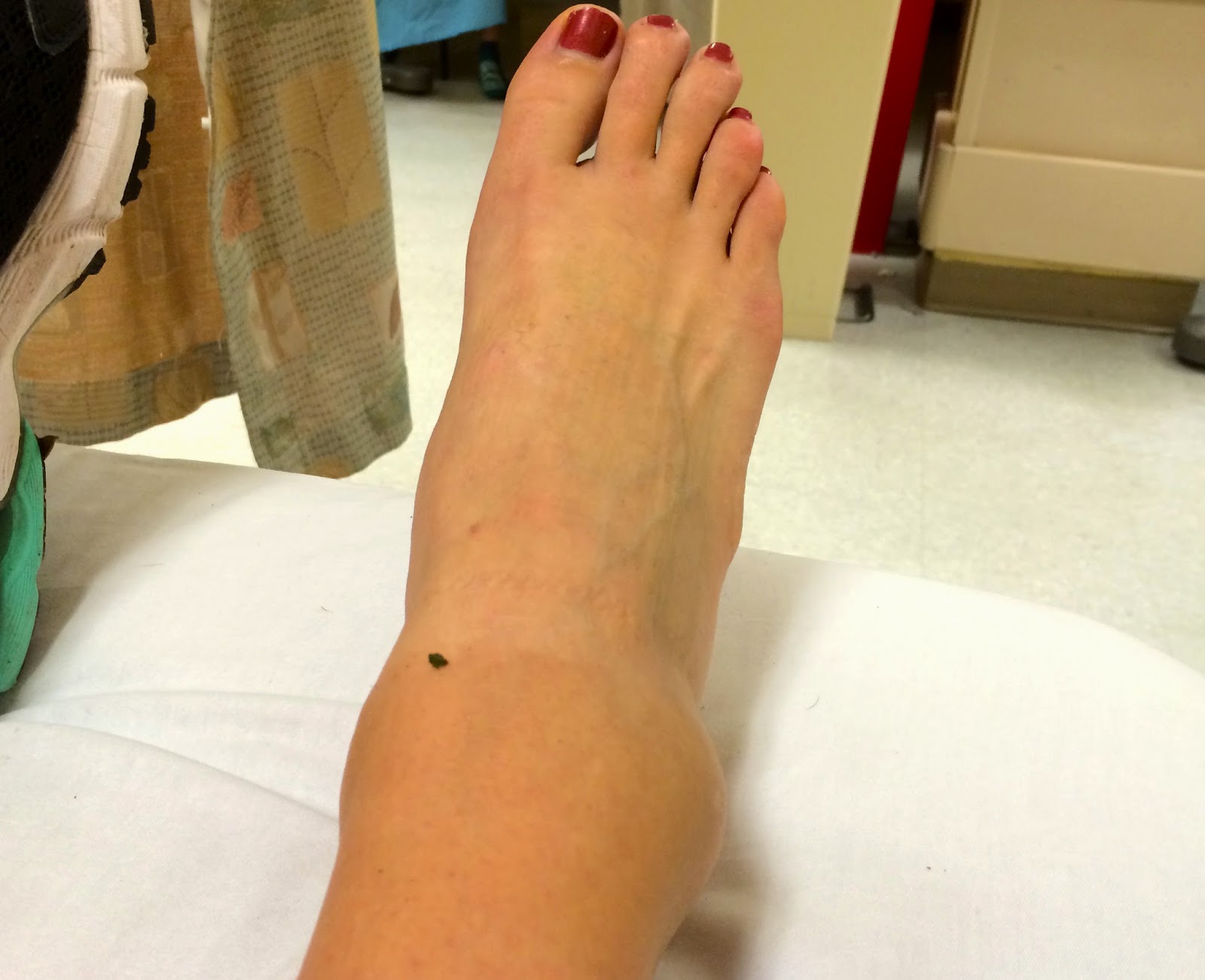 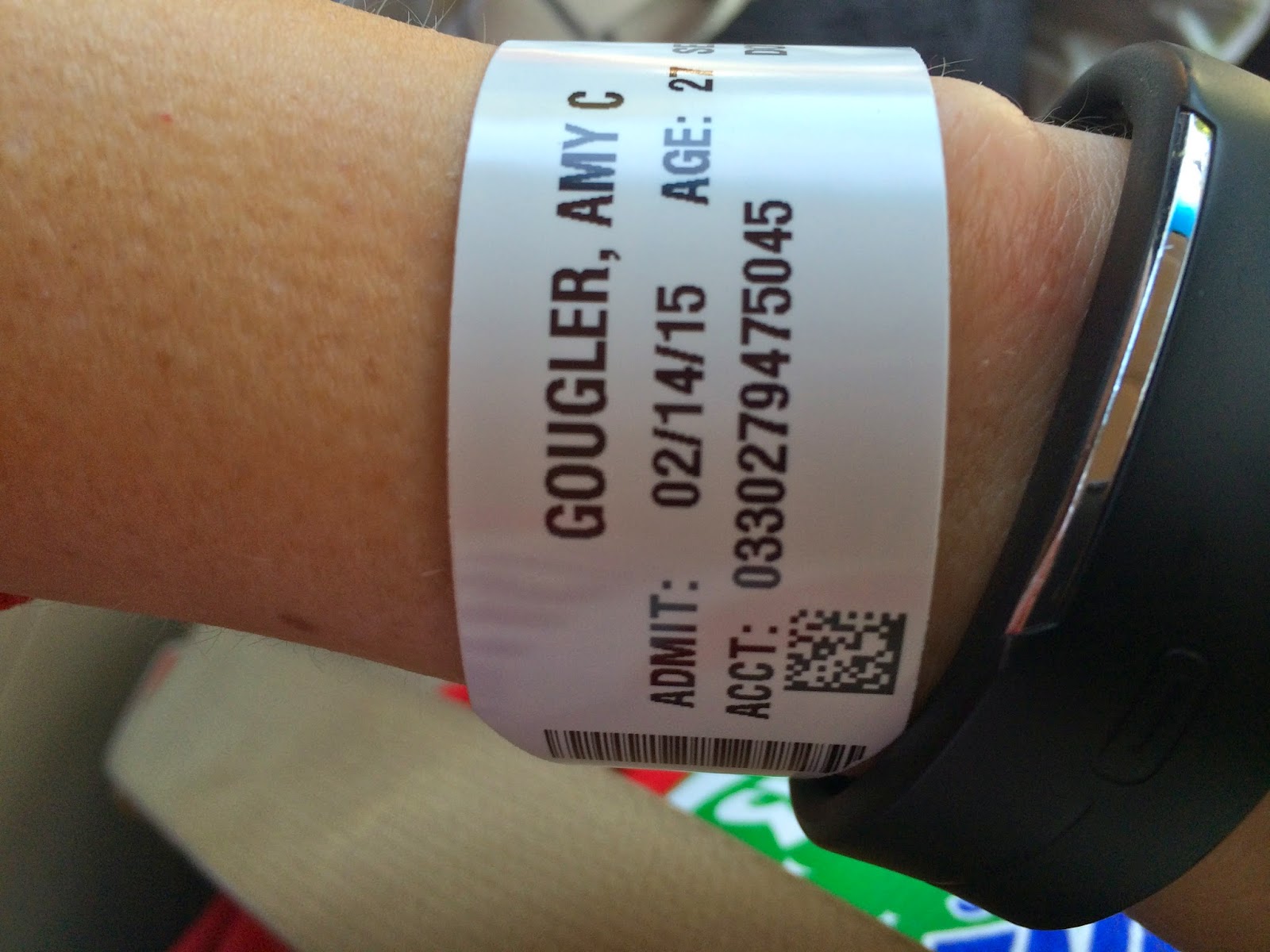 So naturally, I took more pictures! The doc looked at it and said that he was pretty sure that it was a sprain and that the bones weren’t broken. Thank God! But he wanted to get an X-Ray done just in case. We had to wait a little while for the X-Ray techs to come to my bed. The ladies were incredibly sweet and tried to make the painful process as easy as possible. They layered two of the X-Ray vests doubled up over my belly for super extra protection for Baby G!

It turns out the doctor was right and my bones were all in tact, but it was a pretty bad sprain. They sent me home with an air cast and pair of crutches and told me to follow up with my doctor and OB the following week.

The next day, my ankle was still huge! 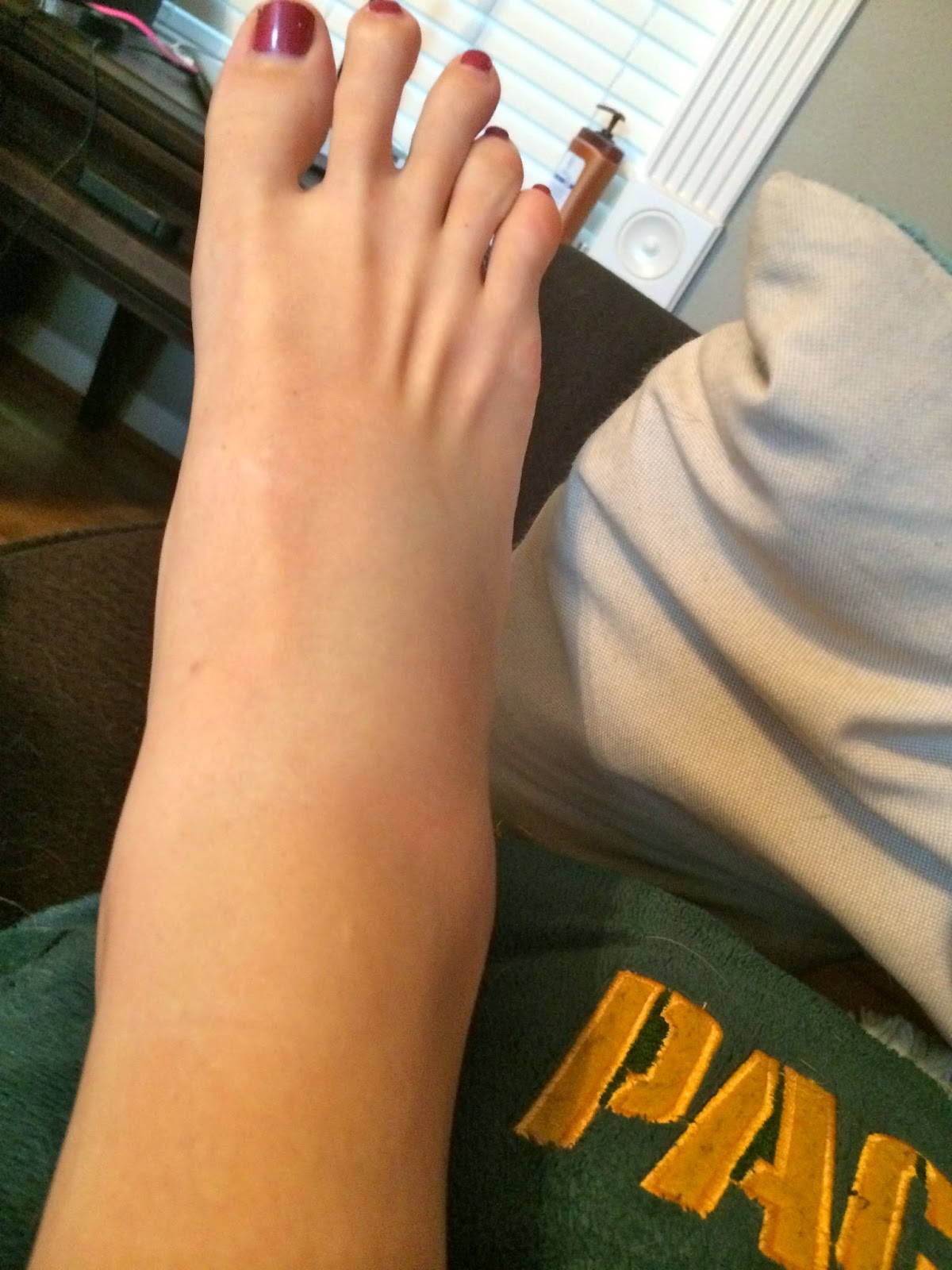 But luckily, my friend Kristen specializes in ankles and was able to squeeze me in on Monday just two days before I had to leave for Disney! After seeing the swelling, bruising and finding out where it hurt the most, she is pretty sure I ruptured my ligaments and probably have a vertical tear in my peroneal tendon. Exciting right? She was able to get me in a boot, but since it’s my tendon that’s the most painful, I had to get the big tall boot. At least it meant I was off crutches after just a few days! 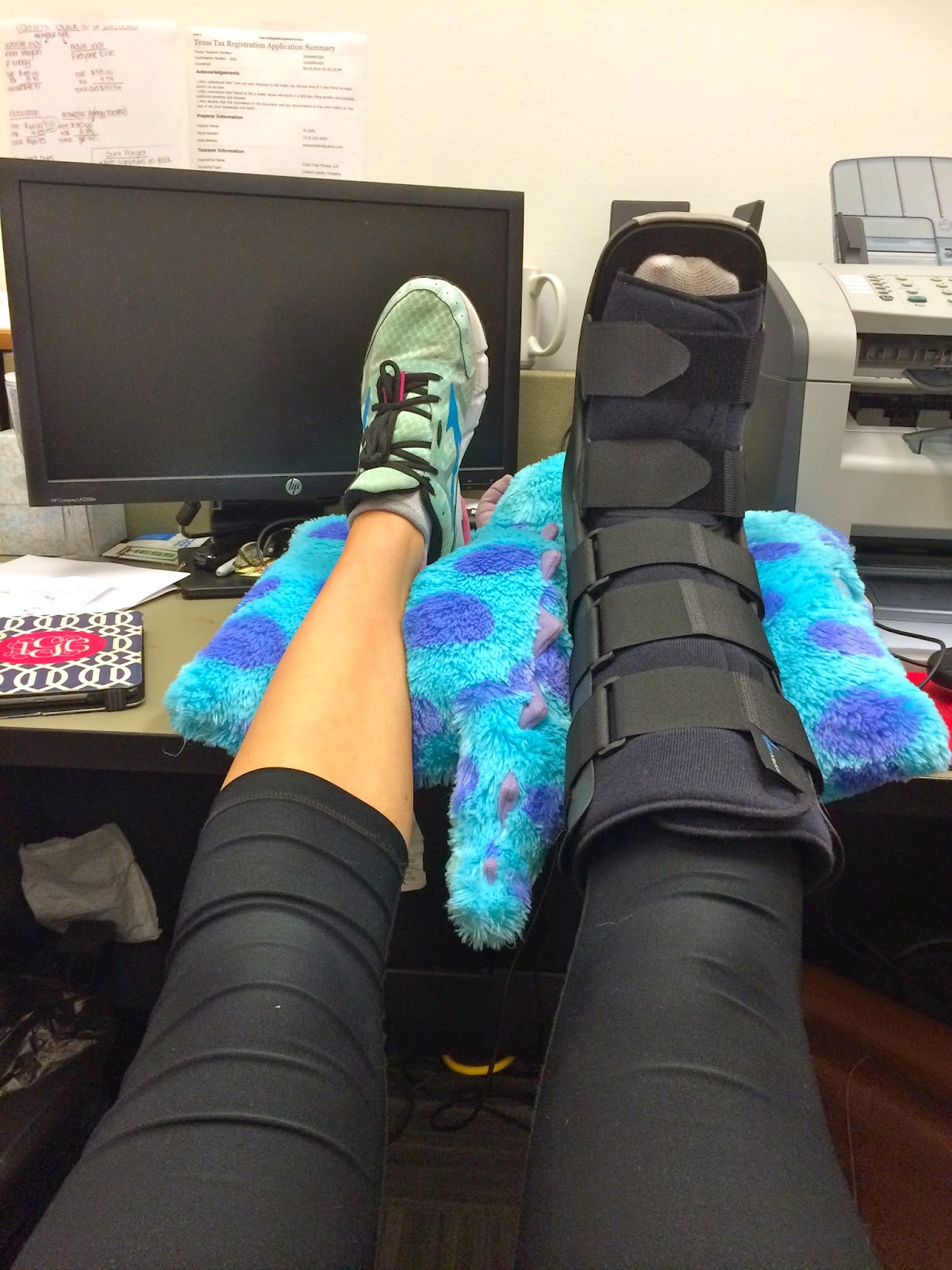 She also put a soft cast underneath my boot for some additional support while I was at Disney. I must say it helped a lot and I liked having it on even though I had to wear a special bag over my leg while I showered! 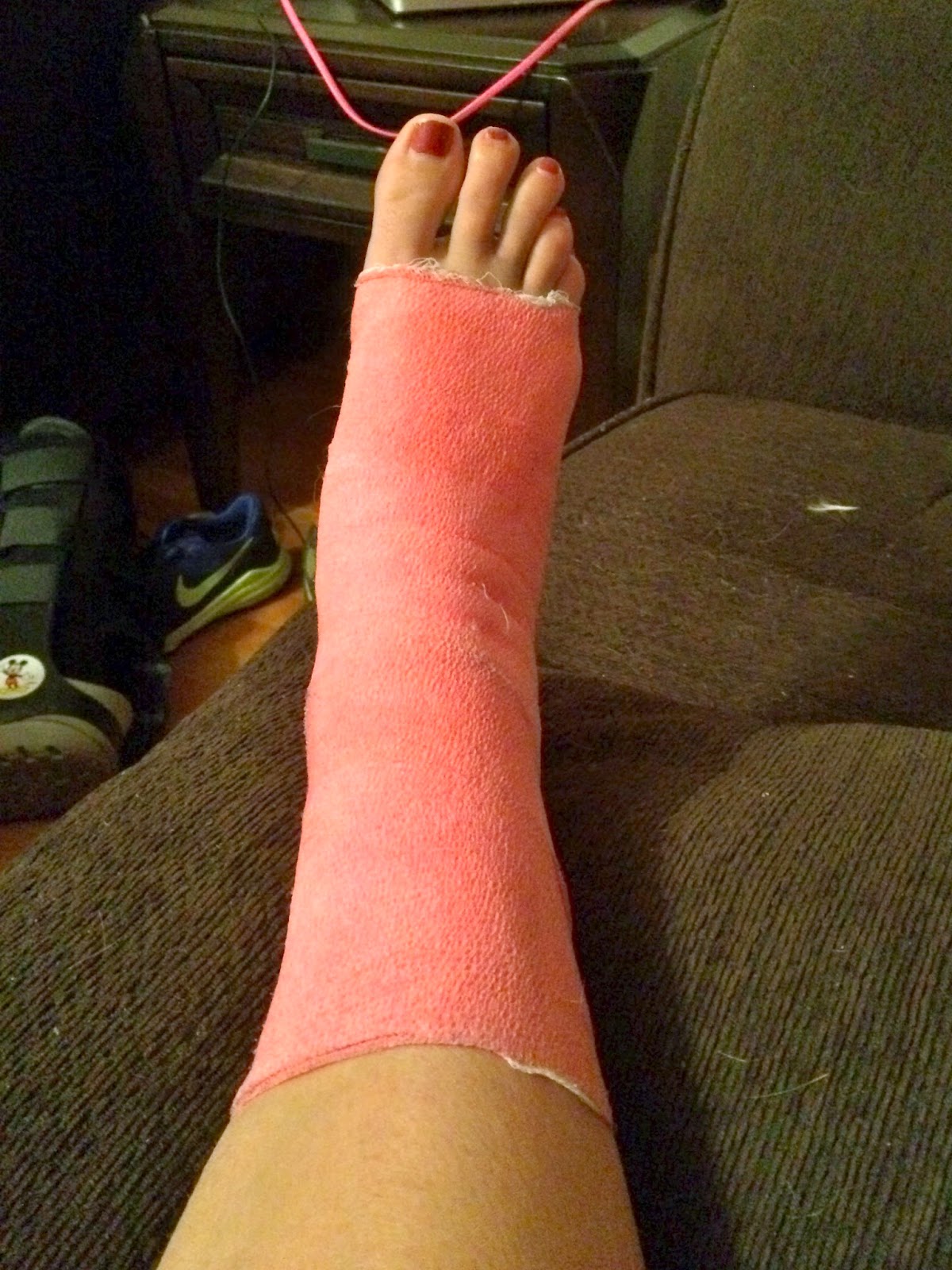 We had a follow up the week after Disney and the swelling had gone down significantly. Of course the bruises were still pretty bad. I’m still in the boot and will be at least until my next appointment on March 20th. Then we’ll see what the next steps are… 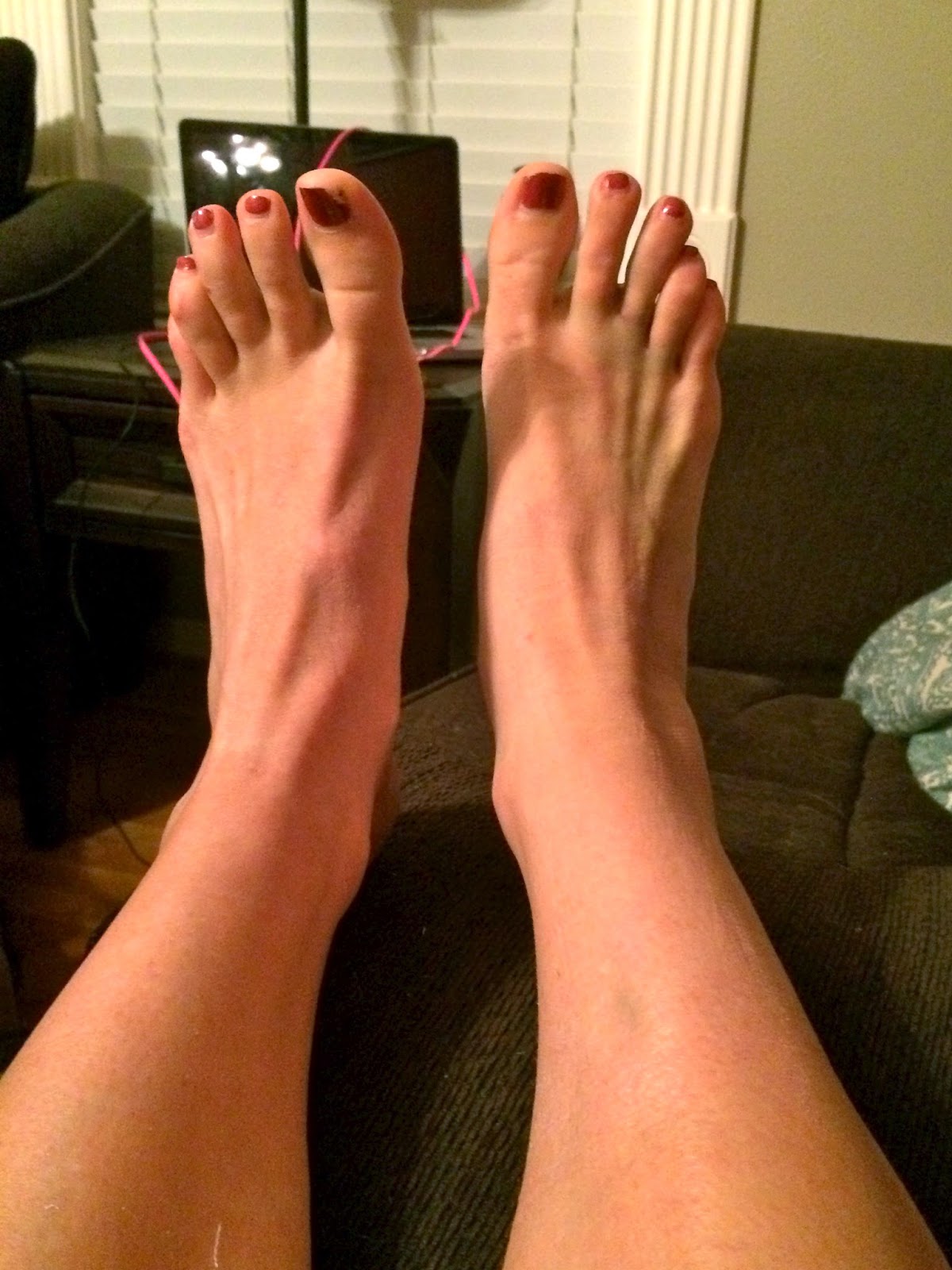 A comparison of my ankles two weeks later. You can see how m right ankle bone still isn’t as defined as my left and the bruising that goes up the outside of my foot. Sorry for the bad lighting and iPhone pic. Just trust me when I say it was pretty greenish blue yellow. 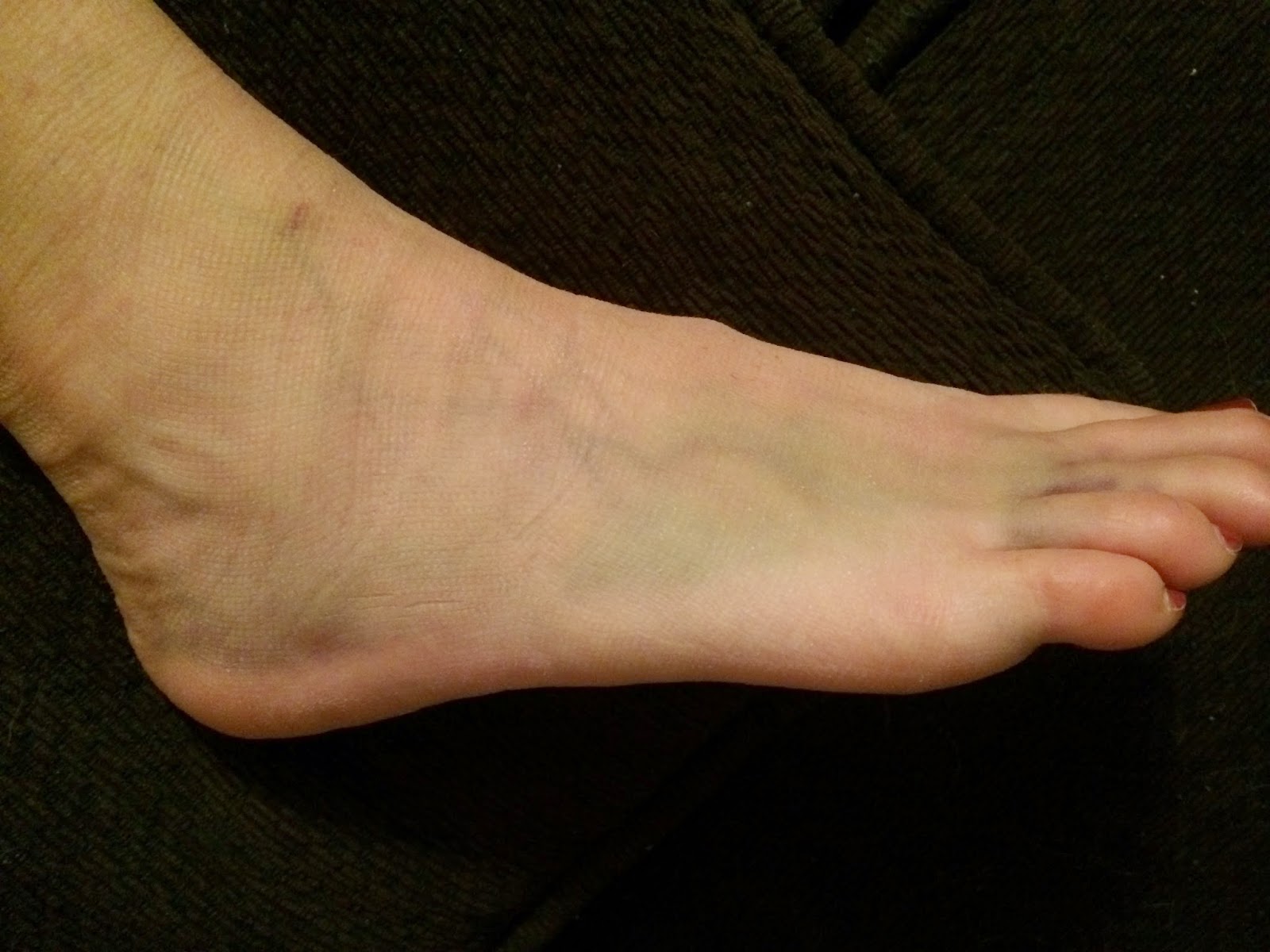 I’m hoping that I won’t need surgery. It’s pretty much the worst grade ankle sprain according to my almost PT sister, but she thinks that if I’m devoted to my recovery that I may be able to get by with physical therapy.

Cross your fingers that I can get out of this boot soon! My hips are over the height difference! I’ve been practicing writing the alphabet with my foot just like the doctor told me to! It doesn’t feel that great but I’ve finally managed to get from A to Z and I do it a few times a day.

Getting injured while pregnant is pretty much the worst. I’m ready to work out again and I miss running more than you can imagine. Going from running 3-5 days a week to barely being able to walk is pretty hard. I’m getting by though. Walking around the track at work and modifying workouts so that I can do as much as possible given my issues. Baby steps right?

Have you injured yourself as an adult? If so, how?
How did you keep fit despite your injuries?