Okay, I’m ready to have my weekend back already! I don’t know about y’all, but this weekend flew by! Luckily it’s a short week…even though I still have to work on Friday…it’ll still be a good one! So let’s get straight to this weekend’s shenanigans.

Friday started out with cute, summery outfits, Starbucks and lots of work. But it turned into sushi and wine date with Ali and puppy snuggles. Sounds pretty fantastic to me 🙂 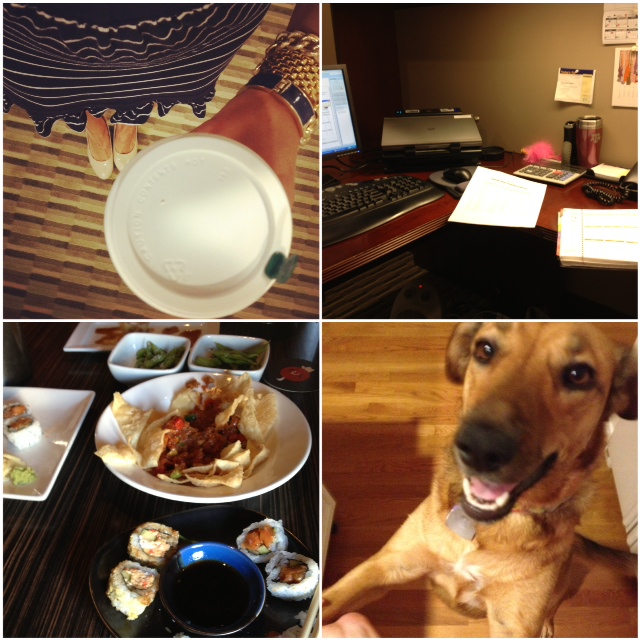 Saturday was a busy, busy day. Naturally, I woke up bright and early because I am no longer capable of this thing called “sleeping in.” So I went for a run. 5 miles. And it wasn’t miserable! It was warm, but the humidity was down from it’s usual 100% self which made things easier. Running was followed by bathing, baking, crafting and cleaning. Seriously though, I had lots to do before Emily came over to go get Charlotte from the airport!

We pick Char up around 1:30pm and went straight to Cyclone Anaya’s for unlimited mimosas and Mexican food. We pretty much pounded our mimosas since the brunch cut-off was at 3pm. Our waiter was awesome and kept the drinks flowing and even brought us one more around 3:15 after we told him Charlotte was from Norway. Score! Lunch was followed by pool and family time. Doesn’t get much better than that!

Sunday was chill. We went on a walk, went swimming and laid out before I had to go teach a step class! Then everyone came over to my house for movies, pizza, drinks and Monopoly. I loved having the whole crew at my casa 🙂

The hubs was gone for most of the weekend, so it was nice to be preoccupied with everything going on. Now I’m still just trying to figure out how the weekend went by so fast! Monday really crept up on me this week.

Here’s to a good Monday and for Thursday to come quickly! Don’t forget to link up with Sami!