Happy Thursday! I am super excited that the week is wrapping up and so is this year! 2011 has been a great year of growth and love for my little family. I’m so thankful for everything that God brought to us this year and look forward to what 2012 has to offer! In honor of the new year being just 3 days away, I’ve decided to pick just 1 picture from each month this year to sum up 2011! Enjoy 🙂

January: We moved to Pittsburgh, adopted Maggie and I ran the Houston half marathon!
﻿

﻿ February: I travelled to Houston for a sales conference, saw one of my best friends get engaged and ran in the Disney Princess half marathon!

March: We saw Disney on Ice, became friends with Maria and Kate, Emily, Matt and Julie came to visit us in Pittsburgh!

April: Maggie graduated from puppy school, I went to Houston for work and saw all my friends, Andrea came to Pittsburgh for Easter, JP and I travelled to Washington, D.C. to celebrate our 1 year anniversary!

May: We bought a grill, went to our first Pittsburgh Pirates game and JP turned 25!

June: I went to Galveston and JP went to Vegas for bachelorette{Alison}and bachelor{Philip}parties, I went to Illinois with my dad to see my cousin get married, and Julie came to visit us again and we went up to Niagra falls!

July: We saw two of our best friends {Alison & Philip} get married, we went on a week long cruise in the western Carribean with my family and JP’s parents came to visit us in Pittsburgh! 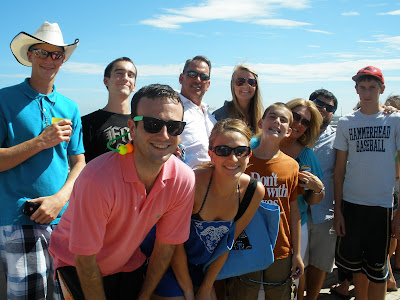 August: I went back to Houston for work, to Vegas for my sister-in-law’s 21st birthday and we took Maggie to her first Pirates game for Pup Night at the Park!

September: I turned 24, football season started and we ran the Rock ‘n Roll Philly half marathon with Andrea…it was JP’s first race!

October: JP went to New Orleans for Travis’s bachelor party {JP was the best man!},we started playing on a flag football team, my parents came to visit us in Pittsburgh, I saw SYTYCD Live with Maria and I went to Green Bay to see my Packers play at Lambeau!

November: JP went to Vegas again, I ran in the Rock ‘n Roll San Antonio half marathon and we headed to Texas for Thanksgiving and some Fighting Texas Aggie Football vs. t.u.!

December: We saw two great friends get married {Travis and Hanna Jo}, we hosted a Tacky Sweater/Going Away party, we spent as much time as possible with Matt and Maria and we drove from Pittsburgh to Texas just in time for Christmas with the family!

Just saying…it’s super hard just to pick one picture from each month! I realized that I easily took THOUSANDS of pictures this year. I’m kind of proud of that. What an amazing year it has been and I’m so glad to have it all documented! Here’s to an amazing 2011 and an even more exciting 2012 to come!