In just 6 days, my little, bitty, baby girl is going to be THREE years old. She’s no longer a little, bitty baby. She’s grown and matured so much over the past few years. I blinked and she’s another year older.

Her personality has blossomed as she’s turning into her own little human. She’s kind, loving, a little shy, full of energy, incredibly opinionated, strong willed and smart! She loves her family more than anything in the world and I think she’ll be such a great big sister in just about a month. She struggles a little bit with being comfortable around other kids, but she’s slowly opening up. I plan to do a full all about Chloe post next week just for me to keep forever and ever! Today I want to share her birthday party… 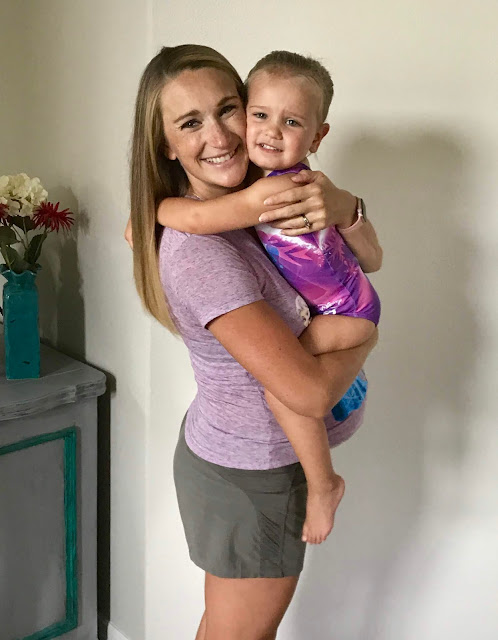 Disclaimer: These pictures are kind of a hot mess and all over the place. I didn’t get a single picture of the adorable set up or a solo picture of the birthday girl. There are lots of action shots because these kiddos were having so much fun! Plus Chloe is NOT into pictures these days. It took bribery to get her to smile in the one above at our house before the party!

Over the past few months, Chloe told us that she wanted a “pink Anna party” aka a pink Frozen party, so this momma made that happen by buying a few Frozen themed decorations along with some pink colored decor and pink frosted cupcakes. Since I’m quickly approaching 36 weeks pregnant, I knew that this year was not the year to do a party at our house! We talked to Chloe and she decided that she wanted to have her party at the gym where she takes gymnastics. It was the BEST idea and the perfect party set up. 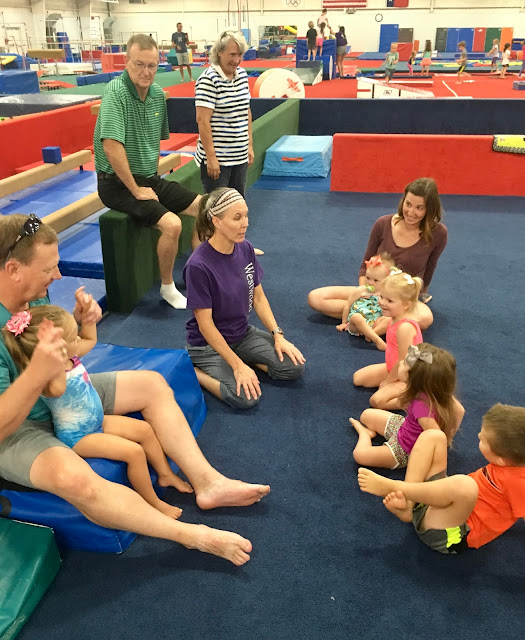 They start out in one area, go over the rules and then let the kids run around doing whatever they want in that specific area! 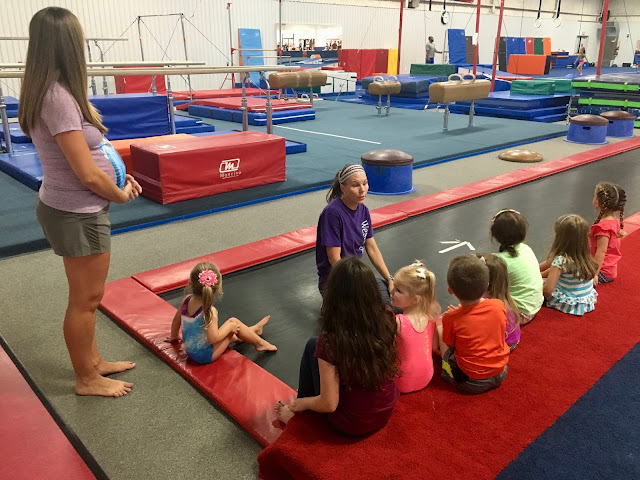 Then they move to another station! This big trampoline was probably Chloe’s favorite. At the end was a big wobbly wall that they could crawl across too. 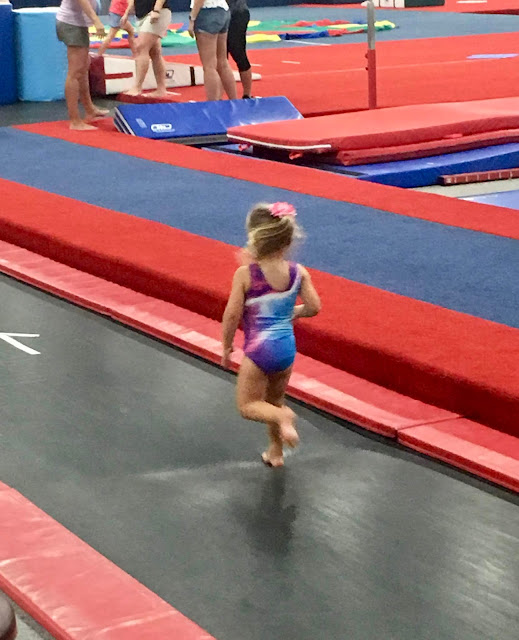 Next they got to play with the parachute! At first we weren’t sure if Chloe was going to like it, but she ended up loving it! They got to take turns running on top of it and eventually we all went underneath. Of course Chloe escaped because they decided to sing Happy Birthday to her, and this little girl doesn’t really like to be the center of attention. In fact, she HATES it when all eyes are on her! But that’s okay, not everyone craves the spotlight like her momma. 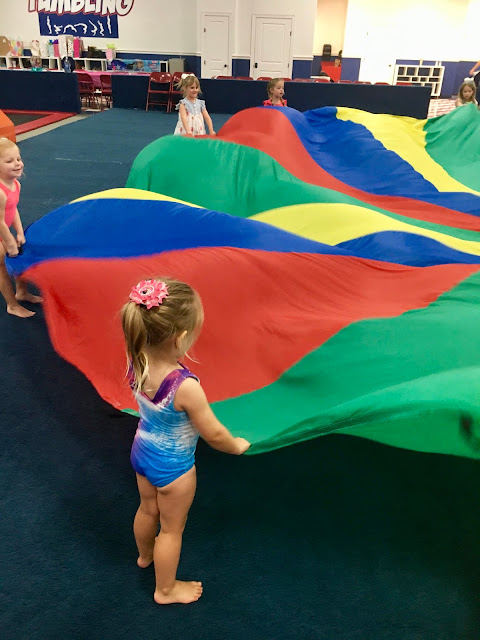 The last station was the mountain which is essentially an indoor playground and so much fun for the kiddos! A rock wall, foam pit, fireman pole, secret tunnel and tons of stairs and slides. 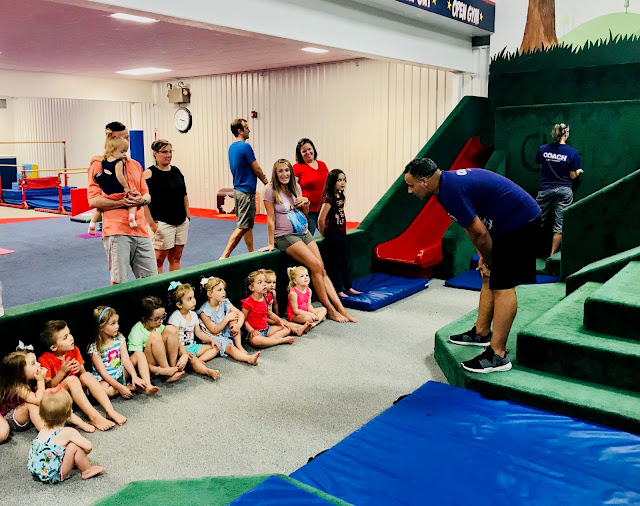 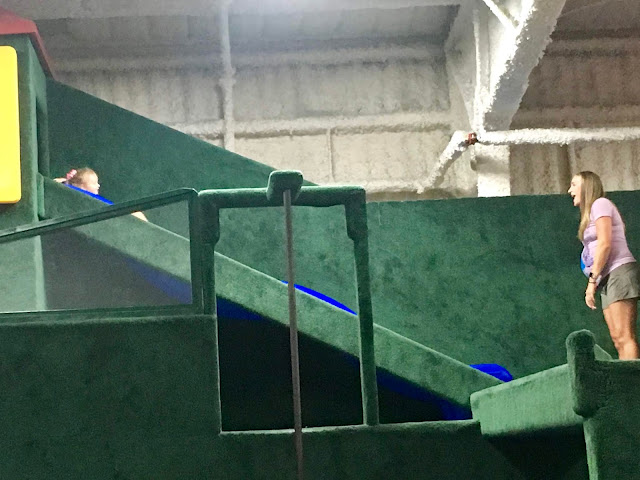 Chloe got to go first and they sang Happy Birthday to her again. Luckily this time it didn’t bother her as much because she was too busy going down the slide! 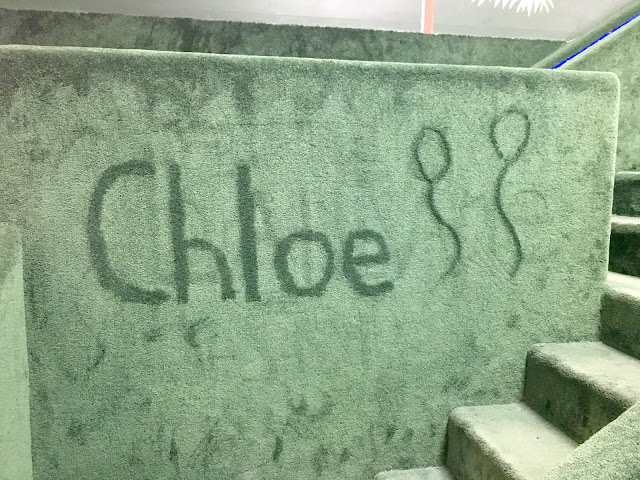 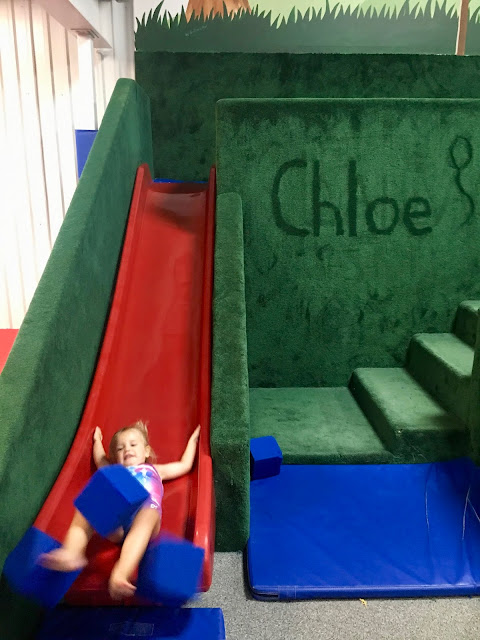 The picture above is quite possibly my favorite one of the day! Chloe gets to play on the mountain every week at her gymnastics class and she absolutely loves it. She had a mini meltdown while we were playing on it during her party, but that’s just Chloe for you. She’s very sensitive and when things don’t go her way, you’re in for it.

Before we left the mountain we were able to get a group shot! We’re somehow missing a couple of kiddos, but I’m thankful that we got this even if everyone is looking in different directions and I’m in it because Chloe wouldn’t take the picture unless I was there. 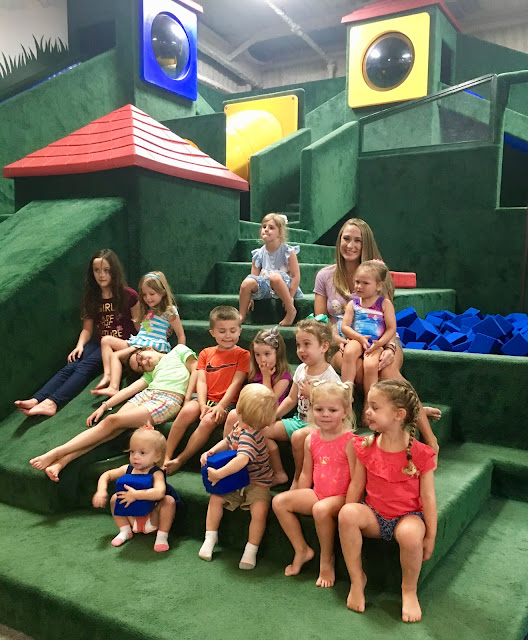 The way parties work at the gym is the first hour is playing at the different stations around the gym. They get about 15 minutes at each one. Then the last 30 minutes is for snacks and cake! They have their parties set up like a well oiled machine. I’m so impressed with how efficient they’re run. 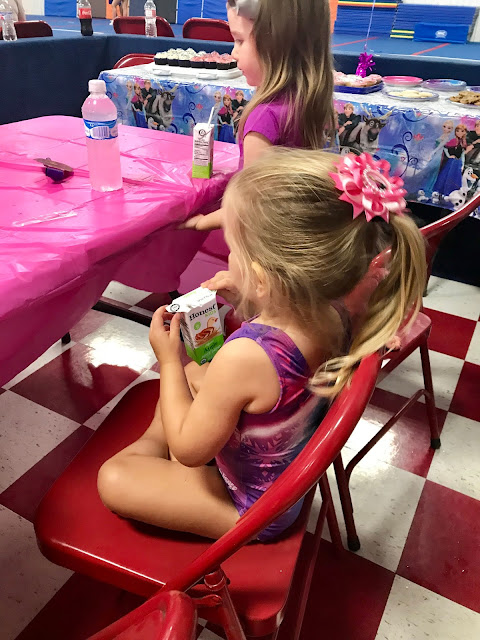 We made chocolate and funfetti cupcakes with pink frosting along with chocolate chip cookies and juice boxes! Since her party was at 2:30pm, I didn’t think it was necessary to do much else and I’m glad I didn’t. It was the perfect amount and the kiddos loved it.

Chloe was all smiles after her party and kept talking about it the rest of the day! 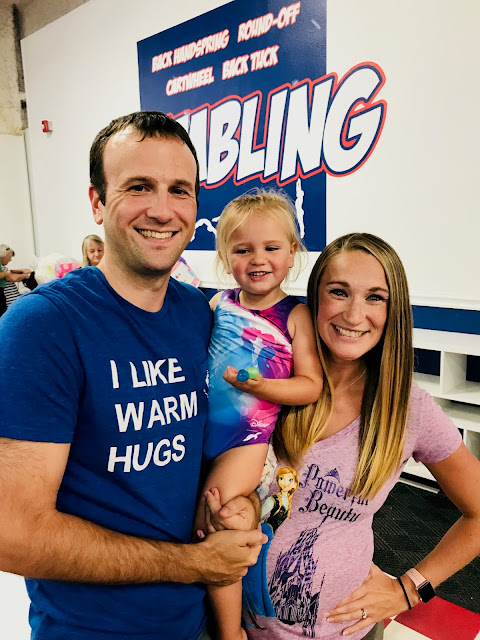 Since you only have an hour and a half for the party, the coaches helping you bag up the presents for you to take home and open. A little while after her party, Chloe wanted to open hers, so I snapped a few action shots! 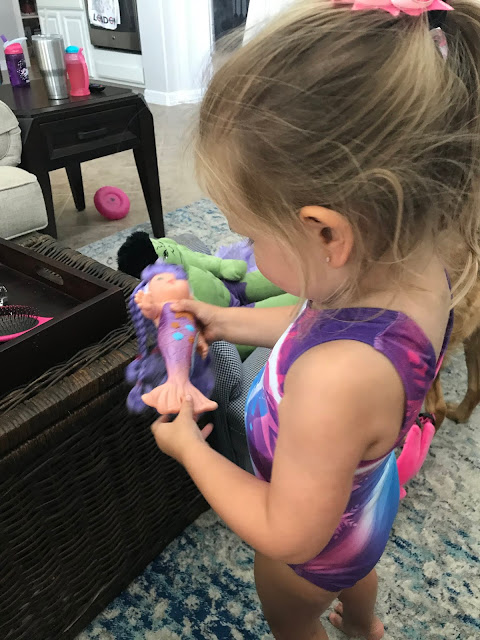 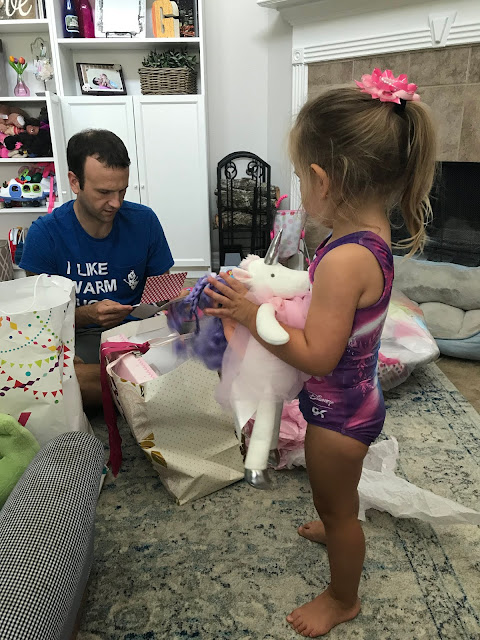 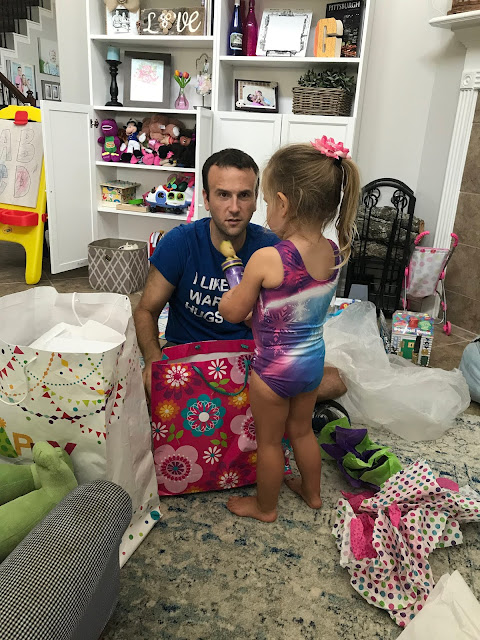 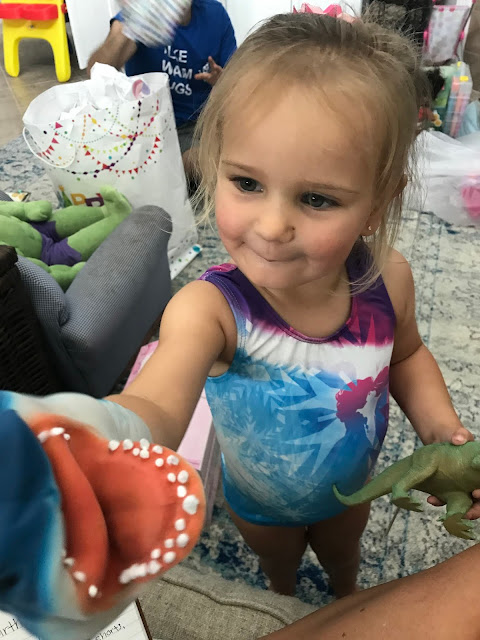 Every time she opened something, she would grab it and then run it over to show me! She got so many awesome presents! Lots of arts and crafts supplies, dinosaurs, sharks, mermaids, unicorns, pool/bath toys…you know, all of her favorite things!

A special shout out and thank you to all of our friends that came out to celebrate Chloe with us! She had an amazing birthday party, and it makes my heart soar to see her this happy. She has so many people that love and care about her! Now I’m going to go snuggle and squeeze my two year old while she’s two for 6 more days. But don’t tell her that she’s two because as far as she’s concerned…she is SO THREE!

Do you prefer to have your kiddos birthday parties at home or somewhere else?
What is your favorite birthday party destination?
This was the first time we had a party somewhere else and I LOVED it! The set up and take down was easy. I didn’t have to clean my house. The party itself was so much fun and a total success. I highly recommend Westwood Gymnastics in Katy if you’re in the Sugar Land/Richmond/Katy/Cypress area!