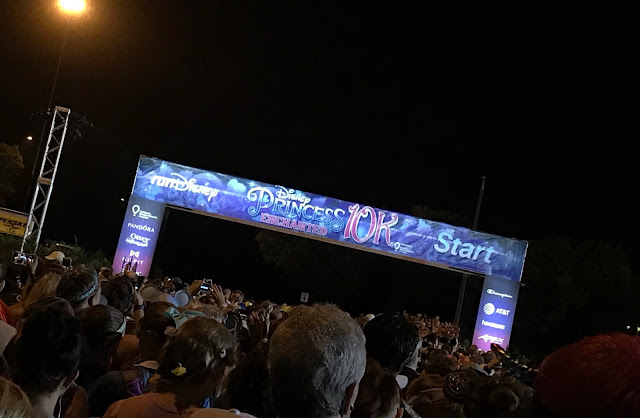 I will find my way, if I can be strong. I know every mile, will be worth my while. When I go the distance, I’ll be right where I belong.
Okay who needs a little motivation this Monday?
Below you can see me running as Hercules for the Enchanted 10K. Pregnant Hercules at 14 weeks and 2 days pregnant! Brittany is Minnie Mouse in the middle and Rachael is Megara in purple on the right! This picture was taken right around the halfway point, so let’s rewind just a little bit. 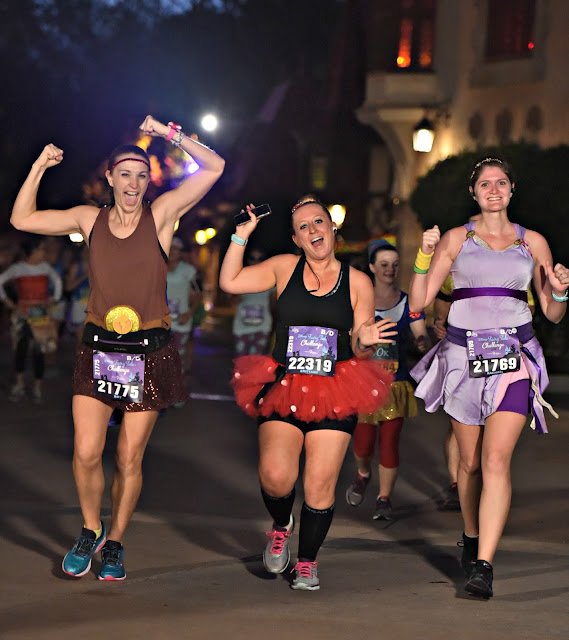 The 10K starts in the same location as the 5K in the Epcot parking lot area. The first three miles are outside of the park along the back roads and backstage Epcot. There are a couple of character stops before you get into the park, but other than that, the first half of the race is like any typical race. This year they had Mulan and Mushu out first, but the line was CRAZY long already. Sometimes I wish that I would have stopped, but then I’m glad I didn’t stand around for 15+ minutes at the beginning of the race.
Rachael, Brittany and I ran the first half of the race together. Once we got into Epcot, I wanted to stop for some pictures, but the girls wanted to push through. Rachael’s foot was injured, and she just wanted to go and get it done since we still had the parks and then a half marathon the next morning. I took the time to visit with a few “old friends” and pick up my speed the second half of the race, just to push myself a little. 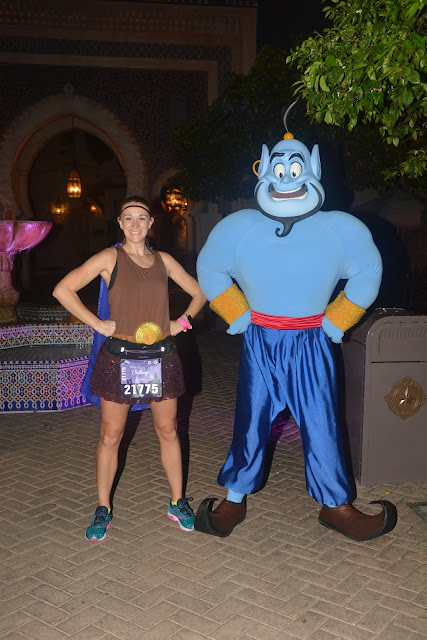 The first old friend I stopped in to see was the Genie! He’s always hanging out at runDisney races. I mean, he said he was going to Disney World once Aladdin freed him you know! 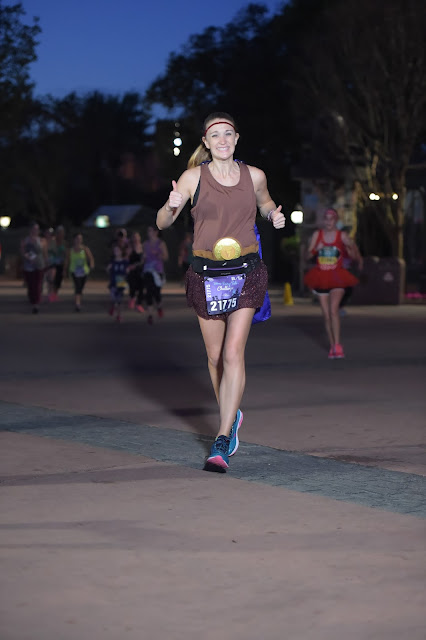 Like I said earlier, I picked up the pace in between characters. I’ve been slowing my running down due to pregnancy as well as heat and humidity, but I was feeling really good for the 10K and I love this course. I’m not saying I was running crazy fast, but I maintained about a 9:30 pace for the last 2.5 miles!
After I saw Genie, I continued around the World Showcase and then onto the Boardwalk! This is my favorite part of the race because you don’t get to run it for the 5K or half marathon. It’s such a special little area with tons of cheerleaders out making you feel awesome about yourself! In fact, Goofy was out there cheering us on too! 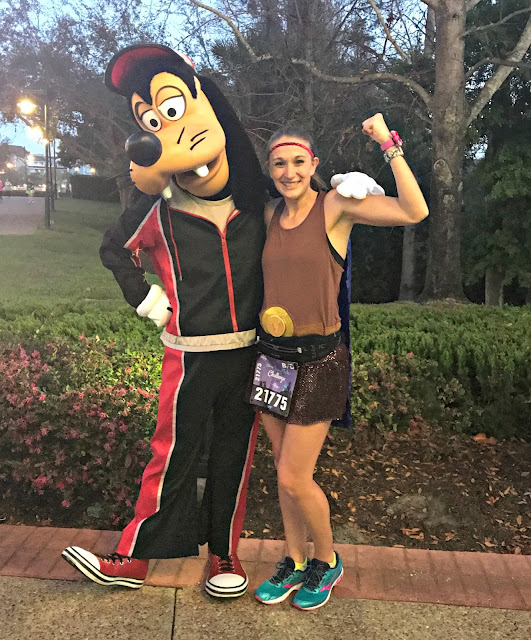 We got a quick picture together and then I was on my way once again. Hercules has places to go you know. Monsters and demons to fight. Damsels in distress to save. 10K’s to conquer!
At first glance spectators couldn’t always tell who I was dressed as, but when people got it, they loved my costume! I had fun wearing it because it was something different for a change. I didn’t see another Hercules on the course. 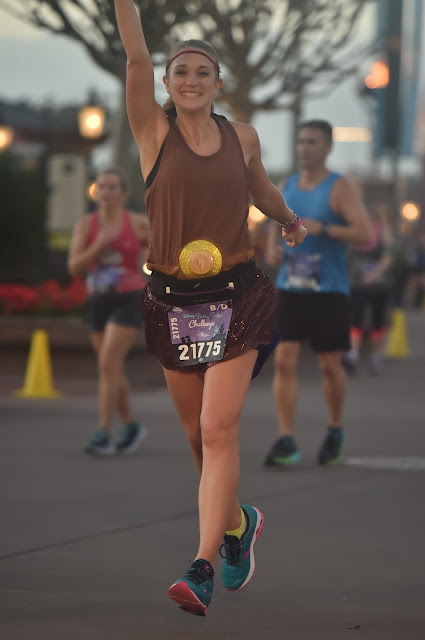 After seeing Goofy on the boardwalk, I had a surge of excitement and energy. I’m telling you, I love the 10K distance! I was feeling great and having fun taking everything in. From the boardwalk we end up hopping back into the World Showcase before heading into Future World. As we were approaching Future World, I had to snap a selfie with the Spaceship Earth ball and Flower & Garden Festival flowers in the background! 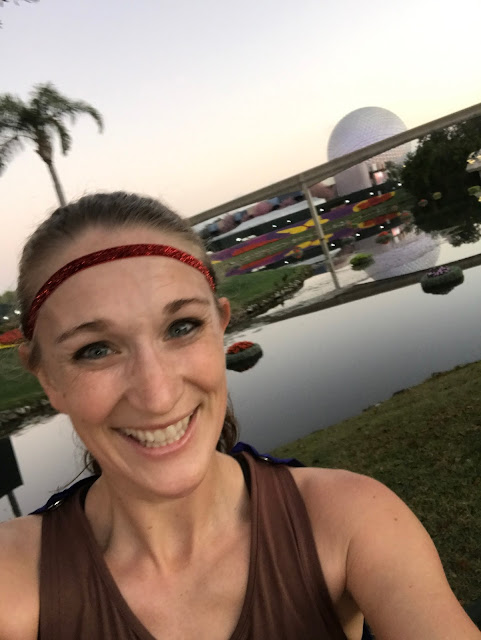 Shortly after my quick selfie, I saw Pluto!!! I love Pluto and had to jump in and get a quick picture with him. Since he was about a half mile or so from the finish, his line was pretty short. He was awesome and threw up his muscle arm with me. Gotta show off the guns you know! 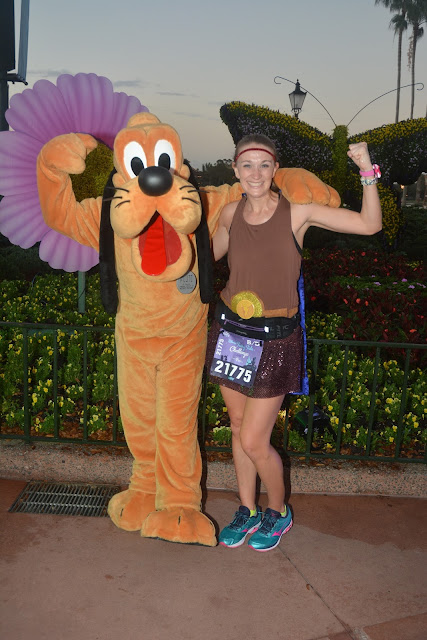 To finish off the race, we ran straight through the center of Future World and around Spaceship Earth…some may know this as the Epcot ball. I was honestly feeling really great. The quick stops for characters along with the extra boost from running through Disney just gives you a surge of energy. I was sure to make sure to strike a post when I saw the photopass photographers out along the course. I had to stay in character, Hercules wouldn’t be tired. 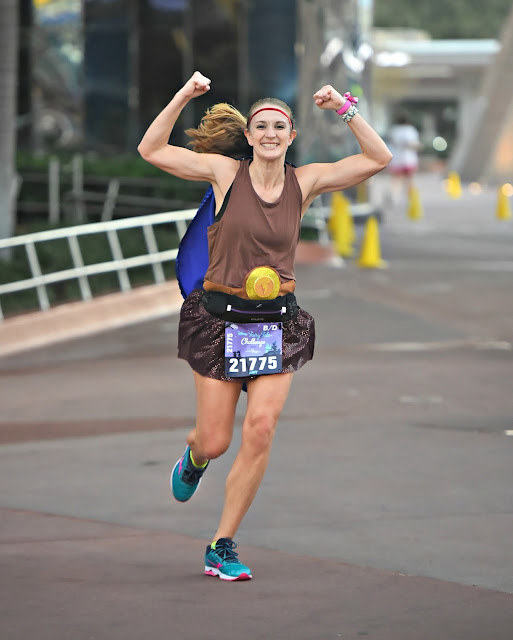 After heading around the ball, you head backstage and to the finish line! I knew I wanted to “fly” through the finish line so I gave it my bounding best. The photographers actually caught it and I got this awesome mid air shot soaring across the finish.

I love this picture above because it really does show some of my musculature! You can see my calves and quads mid-run which makes me super proud. 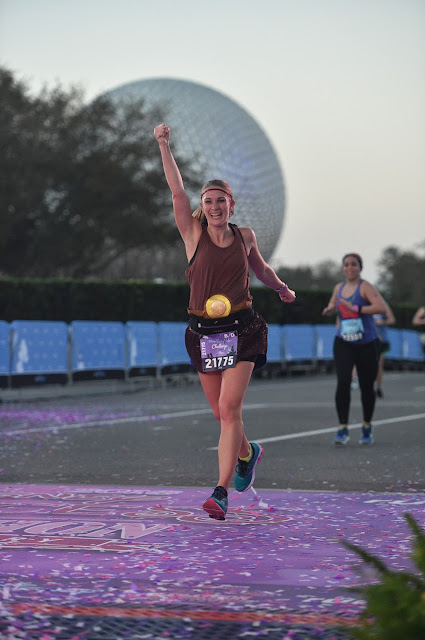 My watch time for the 10K ended up being 1:06:38. I stopped it when I stopped for characters, so my actual clock finish time was probably at least 10 minutes slower and I’m okay with that. Disney is not a race that I run for time by any means. I was really proud that my last two miles were my fastest clocking in at a 9:32 and 9:28! Not too shabby for a pregnant lady just entering her second trimester.

After I took my finisher picture, I saw Rachael and Brittany not too far ahead of me and called out to them! I wanted to get a picture of Herc and Meg together and caught them at the perfect time just before it was too late. 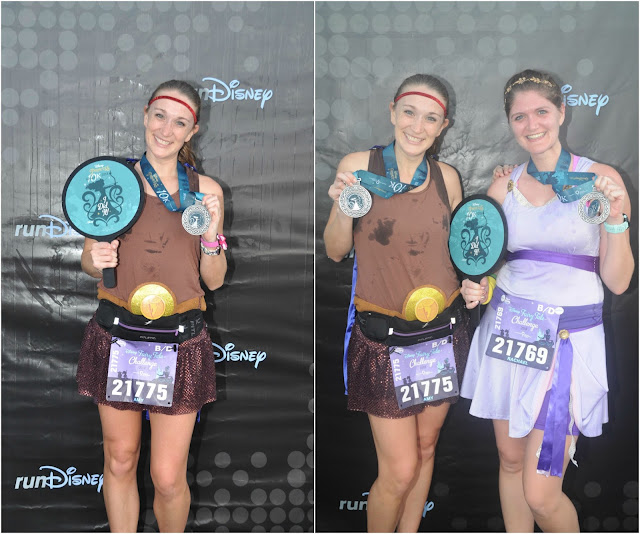 We look pretty good together! Too bad the wet towels they gave us after the race gave me some awesome water marks that ended up looking like pit sweat and milk spots! That’s what I get for wearing a brown shirt! 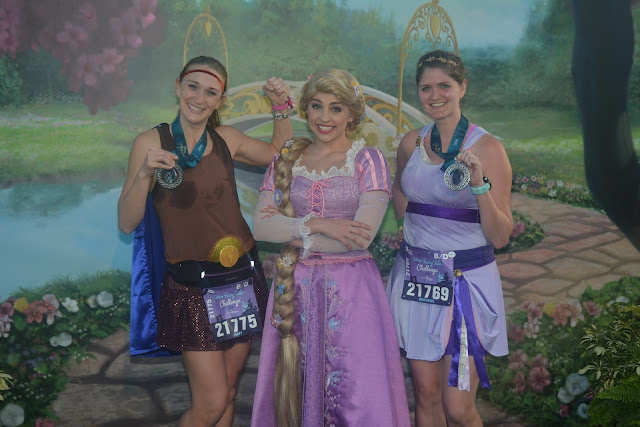 After the race, it was time for princess pictures! Princess weekend is a great chance to get pictures with all of your favorite princesses! They have tons out after the races and the lines move pretty quickly.
We met Punzie and Princess Minnie! We were so excited to see Princess Minnie because she isn’t always out. I sent these pictures to Chloe and she was obsessed. She still asks to see Mommy and Minnie! 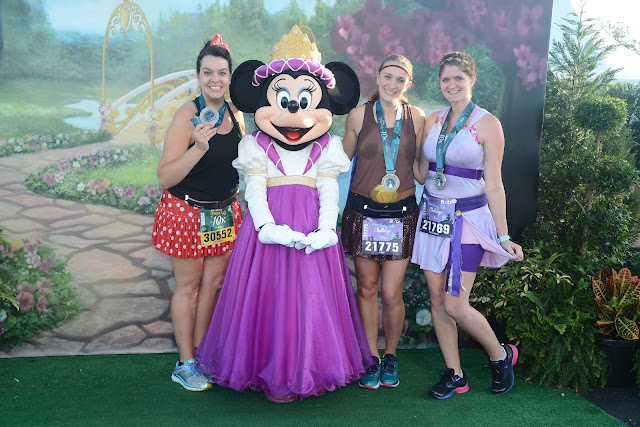 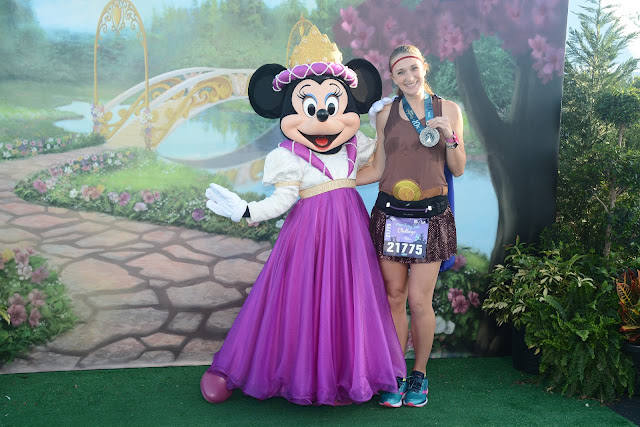 Overall, it’s safe to say the 10K was a great race. I personally love the course and think the race is the least crowded of the three. I wasn’t dodging people as often as the 5K and the course doesn’t narrow too much as it does in a few spots during the half marathon. And like I said before, I love the 10K distance. It may become my sweet spot after I have this baby. Who knows!

Looking back at this already has me excited for my next Disney race! Now to decide which one we’ll do next year…

What runDisney race do you think I should do?
If you could run a race anywhere in the world, where would it be? And what distance?

This website uses cookies to improve your experience while you navigate through the website. Out of these, the cookies that are categorized as necessary are stored on your browser as they are essential for the working of basic functionalities of the website. We also use third-party cookies that help us analyze and understand how you use this website. These cookies will be stored in your browser only with your consent. You also have the option to opt-out of these cookies. But opting out of some of these cookies may affect your browsing experience.
Necessary Always Enabled
Necessary cookies are absolutely essential for the website to function properly. These cookies ensure basic functionalities and security features of the website, anonymously.
Functional
Functional cookies help to perform certain functionalities like sharing the content of the website on social media platforms, collect feedbacks, and other third-party features.
Performance
Performance cookies are used to understand and analyze the key performance indexes of the website which helps in delivering a better user experience for the visitors.
Analytics
Analytical cookies are used to understand how visitors interact with the website. These cookies help provide information on metrics the number of visitors, bounce rate, traffic source, etc.
Advertisement
Advertisement cookies are used to provide visitors with relevant ads and marketing campaigns. These cookies track visitors across websites and collect information to provide customized ads.
Others
Other uncategorized cookies are those that are being analyzed and have not been classified into a category as yet.
SAVE & ACCEPT
12 shares