At this point, it’s safe to assume that you most likely already saw my exciting post announcing our BIG SECRET…we’re expecting! {If you haven’t seen it, hop over here and then come back to me!} Not only did we announce that we are pregnant with baby #2, we were able to tell y’all that we already know it’s a baby BOY! 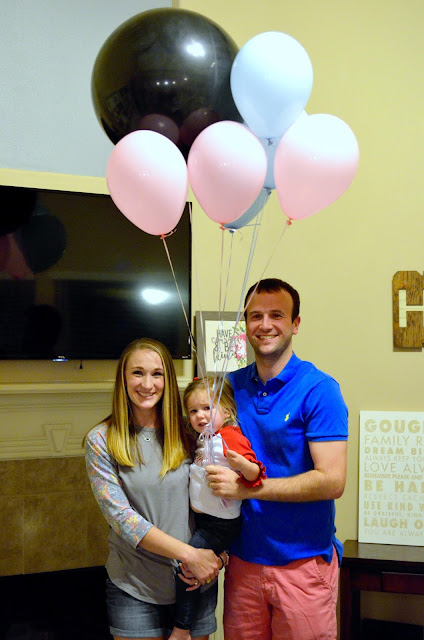 At 11 weeks 5 days, I went in for my monthly OB appointment and had my blood drawn to do the genetic and gender testing. They said it would take up to 2 weeks to get the results back, but I reallllly hoped and wanted them to come back by 10 days. That way we could have all of our parents over and a few close friends to share this special moment with.

I wanted them by Friday, so on Thursday I called to see if they were in by any chance. I talked to my OB nurse and she thought they would be in the next day based on the results she saw coming in. She told me to call back Friday morning. Instead, a couple of hours later, SHE CALLED! My results came through a little after 5pm and she still called me. My OB nurse is the BEST. She let me know they were in and that I could swing by the office Friday morning to pick up my envelope since I didn’t want her to tell me over the phone.

I went up to my doctor’s office pretty much first thing in the morning to pick it up because it felt so real having it! I met up with my friend Jessica who I’ve known since middle school for lunch, and afterwards we went to get my special balloon filled! Jessica ordered a black balloon with both pink and blue confetti. I handed her the envelope, and she took it in to have it stuffed with confetti and filled with helium! Of course, once she came out of the store, she handed me the balloons and said, “Bye, text me later!” for fear of spilling the beans. {She really wanted me to have a boy since her daughter Kate is just a bit older than Chloe and now she wants to pass her boy clothes on to someone! I would have known it was a boy if she showed too much excitement.}

We had the balloon at our house for a few hours before everyone started to come over. It was so tempting to just have it “accidently” pop, but I would have been so mad at myself if I did that. Once the whole gang arrived, it was time! We got the balloon ready and I stuck it with a safety pin… 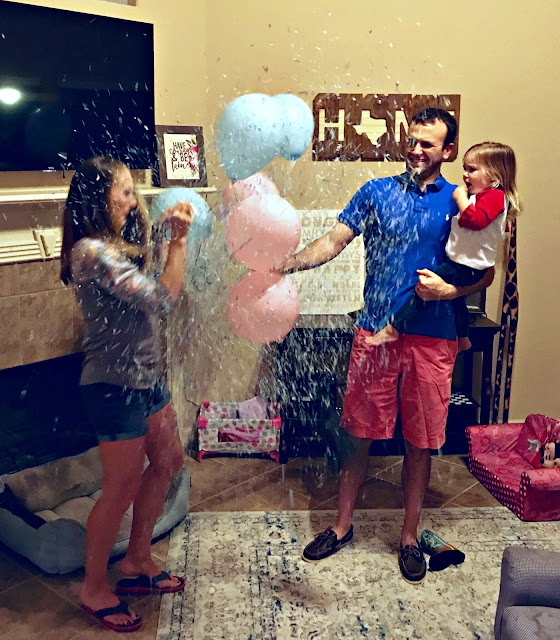 It took a second to realize what color the confetti was, but we were giddy with excitement once we were able to figure everything out! I managed to pop the balloon over my head, so I had confetti all over and in my mouth. Popping the balloon completely freaked Chloe out and she lost it. She ran away from JP and I and went straight for her Nonna and Jojo. Grandmothers are always the best for making everything better. Especially if it’s mommy and daddy’s fault that you’re upset! 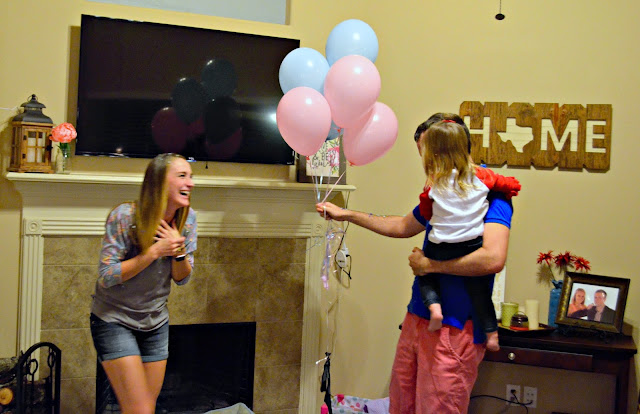 Pictures were hard to capture, but I love this one of my reaction. The lighting wasn’t the best quality in our house and our walls are 50 shades of beige, so everything came out quite yellowy. {Don’t worry, we’re getting that fixed soon!} My sister still managed to get some adorable shots and I’m so thankful for these memories! 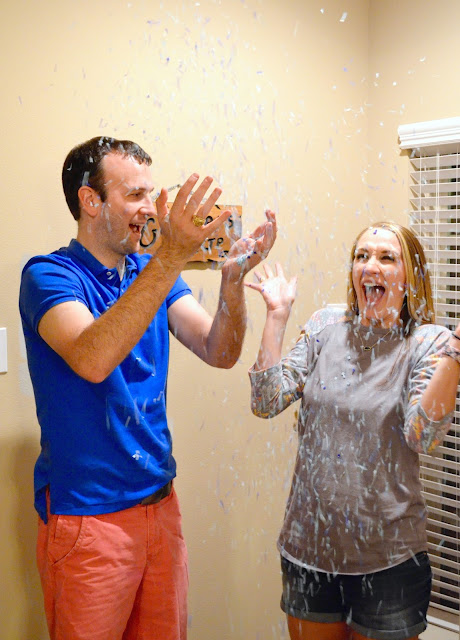 We had to do a confetti toss picture to end the night! We are so thrilled to be adding this baby boy into our family. He is already so loved and wanted.

Hop on over to my Instagram if you want to see the video of our balloon pop! It’s actually quite entertaining! Stay tuned to see how the first trimester was for me, and then I plan to keep y’all updated with either weekly or biweekly bumpdates!