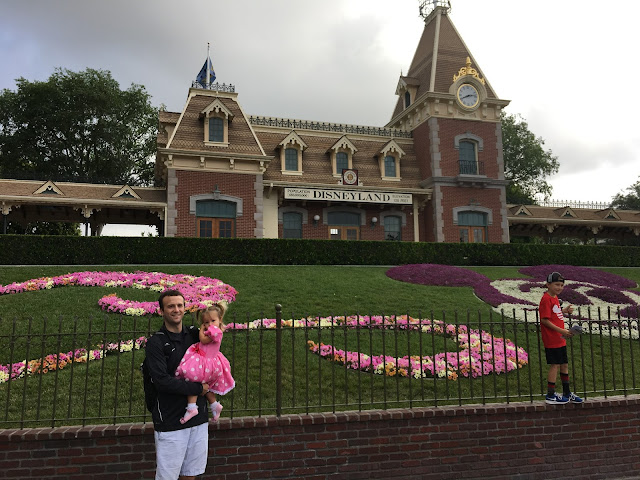 Today I’m super excited to share with y’all all of our pictures from our first day at the Disneyland parks! We spent the whole day at the original Disneyland park and had an amazing time. If you didn’t already get to see, I posted all the pictures from our character breakfast here last week!
Since we had the character breakfast reservations, we were able to get into the park an hour early to enjoy the extra magic hour that the Disneyland resort guests got as a part of their stay! We took advantage of it by snapping some Walt, Mickey and Castle pics before the crowds came! 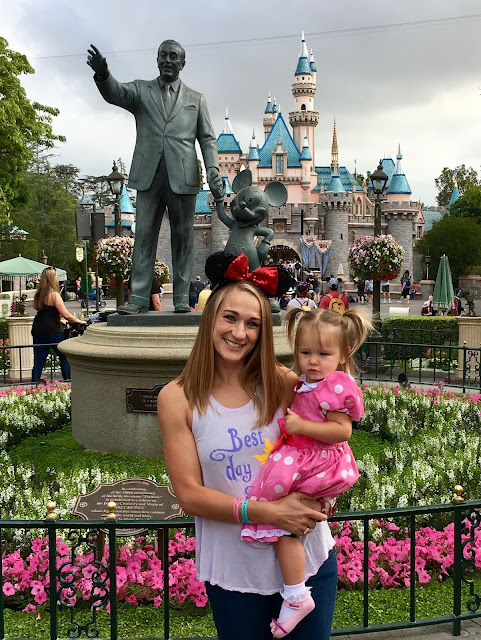 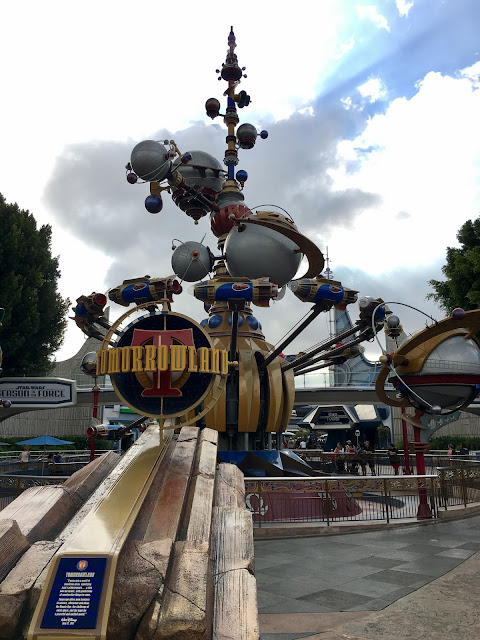 We also went over to Tomorrowland to ride the Buzz Lightyear ride and the Astro Orbiter with no lines at all! Then it was time to visit Minnie and her friends and eat lots of yummy brunch food! 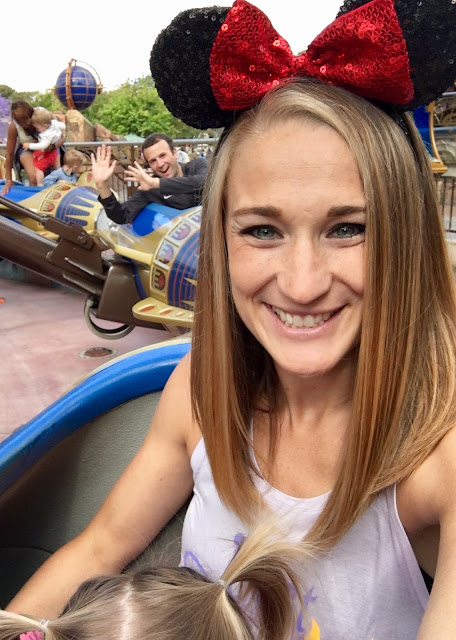 After breakfast we hit Hyperspace Mountain to grab some Fast Passes for later in the day! {In case you didn’t know, Disneyland still has the original FastPass system where you have to go to the FastPass system to get your ticket, unlike Disney World where you can prebook your FastPasses!} Then we decided to hit up some rides. By this time, the lines were already getting kind of long. It was definitely busier than we anticipated! 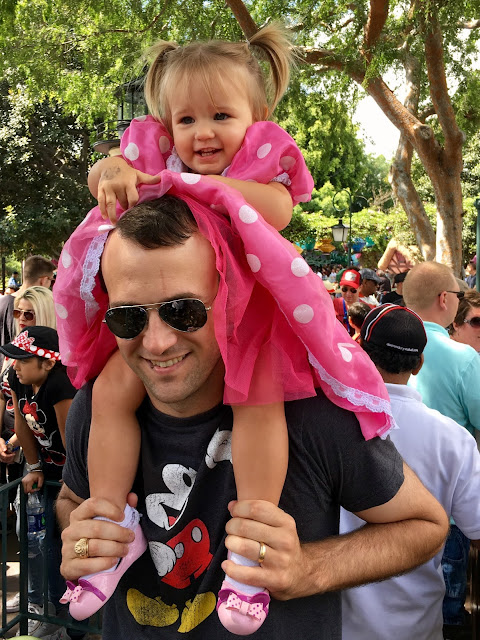 Even though the lines were longer, we found some fun ways to keep Chloe entertained and having lots of fun! Our first ride was the Storybook Land Canal Boats! This isn’t a ride that’s at Disney World so I knew I wanted to ride it! 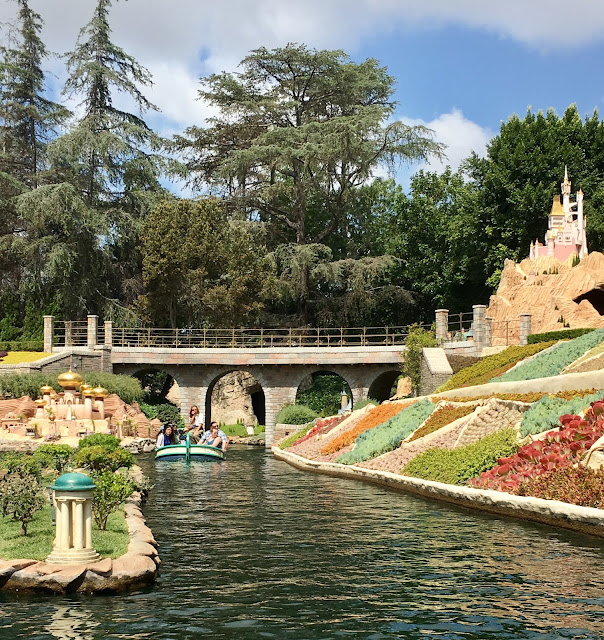 Chloe really liked the boat ride and I loved seeing the miniature scales of some of our favorite movie sets! I mean, take a look at Arendale below! 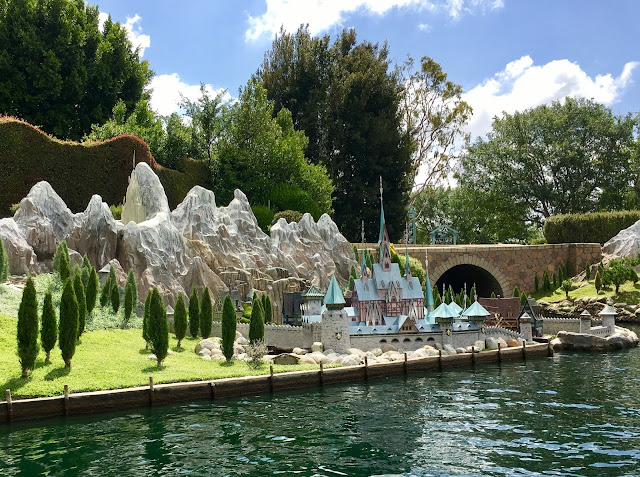 Afterwards, we hopped into line for Mr. Toad’s Wild Ride! Again, not at Disney World, so I had to ride it! Chloe wasn’t exactly impressed. The entire time we were in line she was staring at the carousel begging for the horsies. Once we did the ride, she wanted out! It was dark and there are lots of walls that move quickly to let you through while seeming like you busted through it. I loved it, but Chlo, not so much so we decided to do something just for her next! 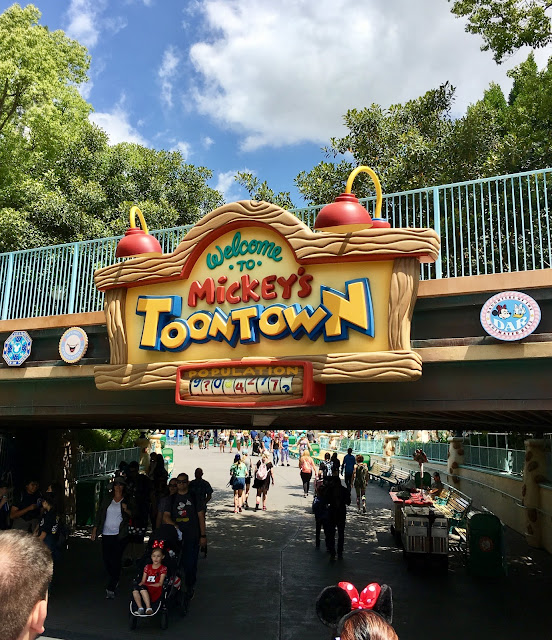 Entering Mickey’s Toontown! Chloe loved playing at Mickey’s Toontown! First we saw Pluto running around so we had to follow him around. Instead of standing in a line to meet him, Pluto runs around from place to place and the line just kind of follows him. It was kind of fun and entertaining to see what he would do next. Chloe thought it was hilarious and love meeting him! 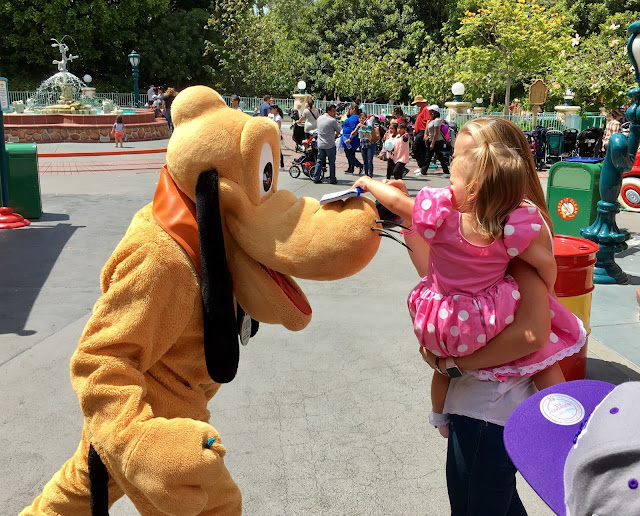 He balanced her autograph book on his nose which had Chloe cracking up. Which was impressive because Chloe became very attached to this book and didn’t want anyone touching it but her! 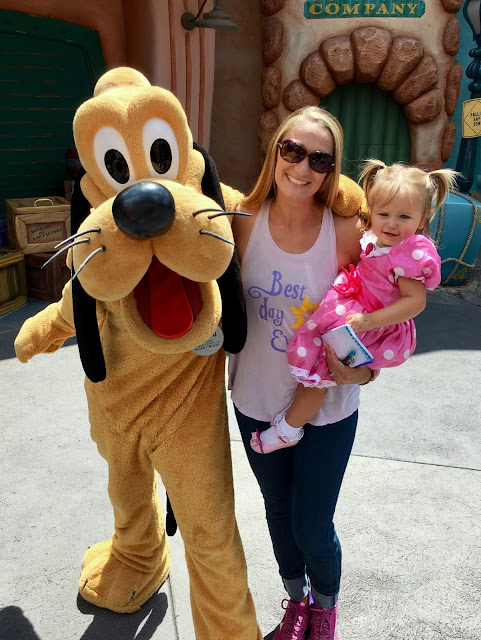 Next up, Goofy! Also known as “Goofo” in the Gougler house. After doing so awesome with Pluto, I thought Goofy would be easy, but she was kind of timid. He is kind of big so I don’t blame her too much. 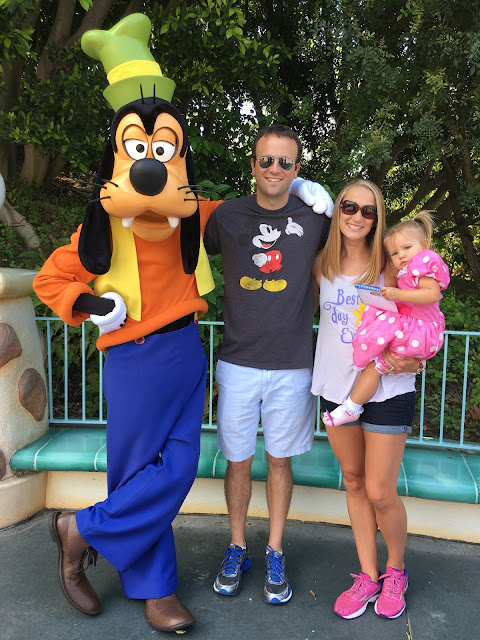 But like always, as we were about to leave, she was all about Goofy! She wanted to give him high fives and wave bye-bye. At least we were able to get these adorable shots. And then she talked all about Goofy and Pluto the rest of the day! 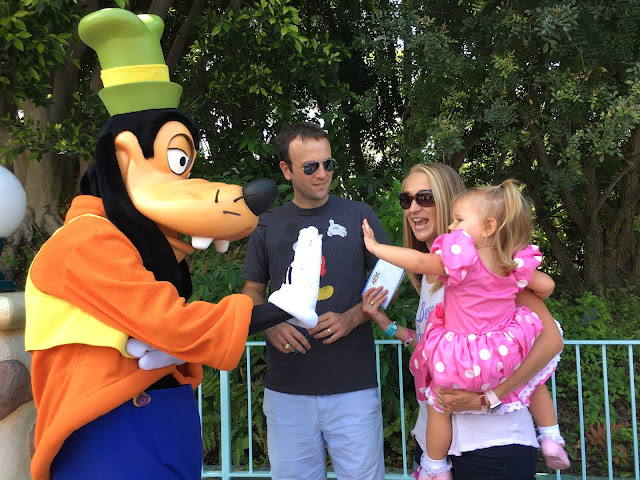 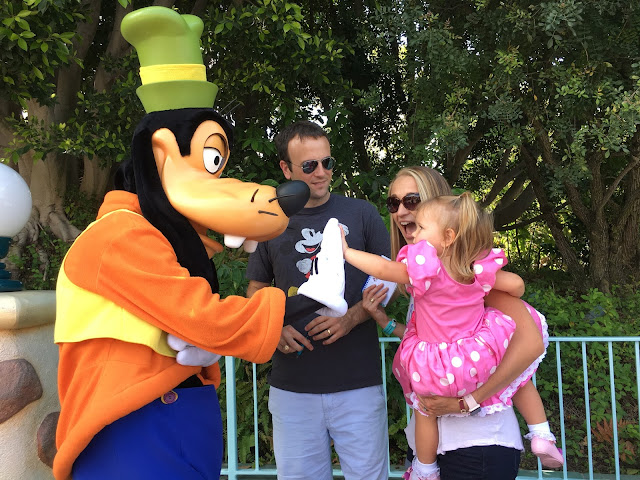 Once we met Pluto and Goofy, we walked around and played in Toontown for another 30 minutes to let Chloe get some energy out and wander around an area that wasn’t so crowded or overstimulating. Then I knew we just needed to go ride the horsies! 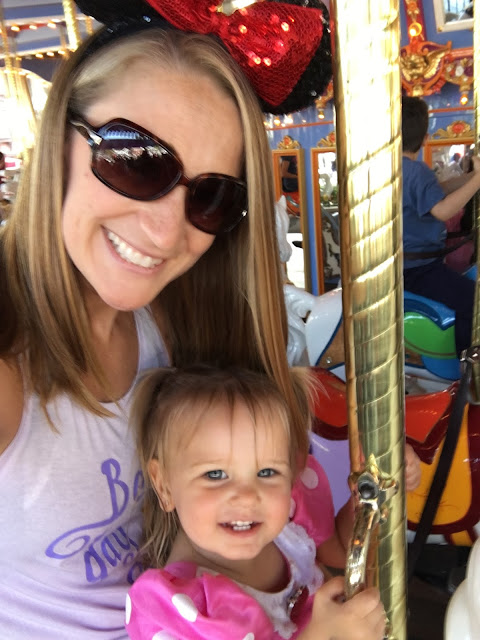 It was only a 15 minute wait and Chloe was the most excited she had been all day! She had the biggest smiles of pure joy while we were riding, and Daddy was able to snap some super cute pictures of us! 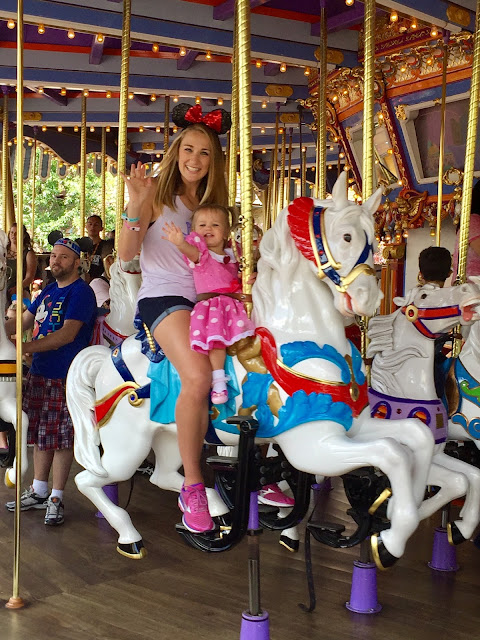 We also rode the Pinocchio ride and walked through Aurora’s Castle while we were hanging out in the area! You know what else was in the area? Princesses!!! 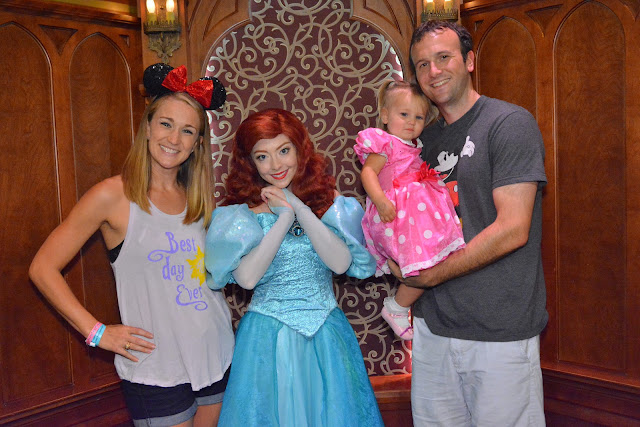 I know she doesn’t look the most excited in these pictures, but she was so funny. She knows Ariel and kept saying “Olial” and hi, but Cinderella was the best! She was bossing Cindy around so hard! 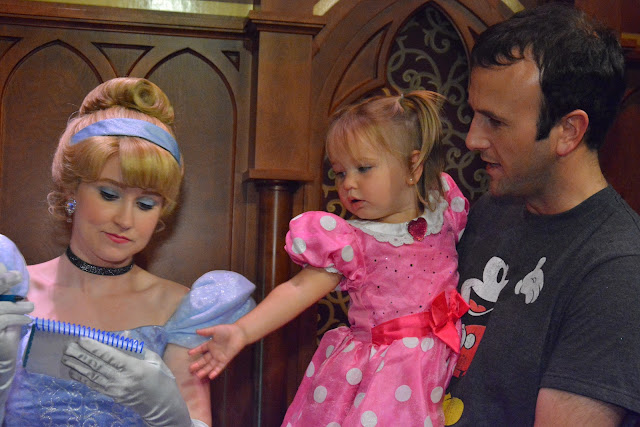 We told Chloe to give Cinderella her autograph book, so she did, but then she immediately demanded that Cinderella give it back! She held her hand out and babbled at her the whole time she was signing, and I couldn’t help but just stand there and laugh. 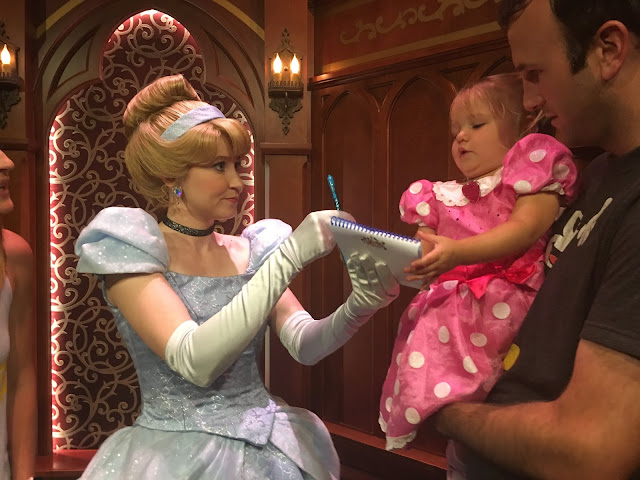 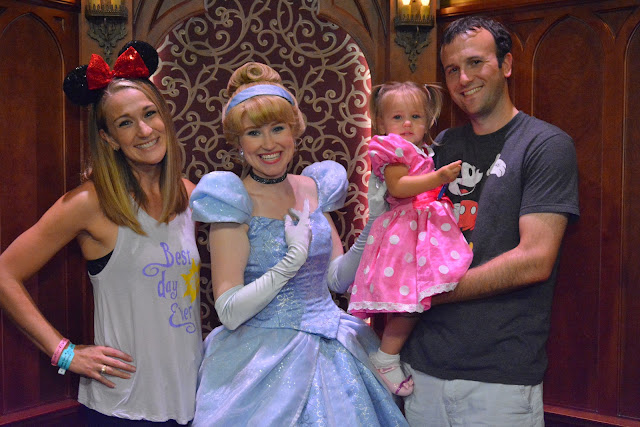 Last we got to say hi to Snow White who noticed that Chloe was quite small like her dwarves! 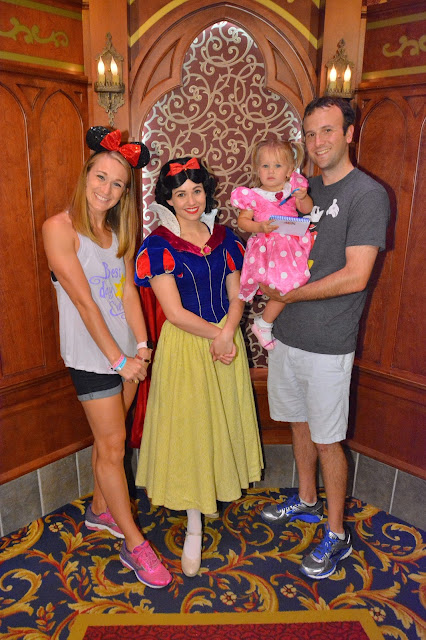 Next up it was time to use our FastPasses for the Matterhorn. Since we had to go individually, we thought it was the perfect time to try and get Chloe to sleep. Ha yeah right. I rode first and came back to a very awake, very fussy Chlo. While JP went on the ride, I decided to wear her in my Tula. After she screamed bloody murder for about 5 minutes, I finally got her to sleep!

Since baby girl was alseep, we decided to attempt lunchtime in Frontierland! We got to take a break and eat while Chloe napped. I was able to transfer her to the stroller while JP got us some food. Plus, while we were in the area, we grabbed FastPasses for Big Thunder Mountain Railroad.

Chloe slept through our lunch and stayed asleep for a little over an hour. I’ll take it! We walked around hoping to ride Haunted Mansion or Pirates, but the lines were over an hour long. Nope. We decided to just pass and walk around instead. This led us to our balloon! I’ve always wanted a Mickey balloon and Chloe was obsessed with them, so JP caved and bought one for us. 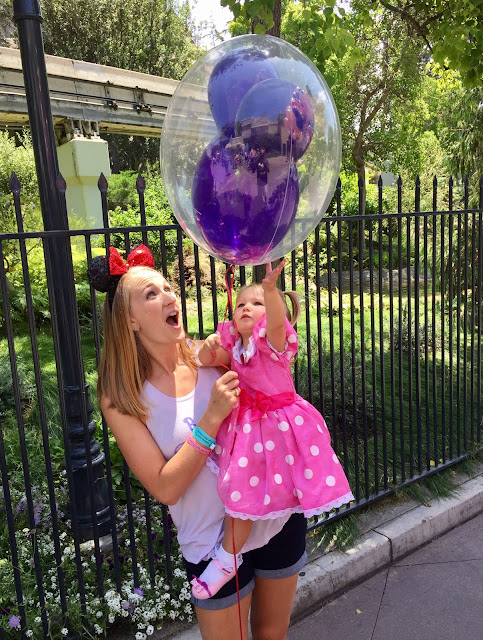 Chloe originally asked for yellow, then when she saw it, she goes, “No purple!” Once she saw the purple one her eyes lit up. It was a great purchase because it kept Chloe entertained and it helped us find our stroller everywhere.
Later in the day we got to use our Hyperspace Mountain FastPasses, but the ride shut down! Luckily, an hour later it was back up and running. We rode another ride and then it was back up. Did y’all know that Hyperspace Mountain is now Star Wars themed? They renovated the ride and it’s super different and cool! I really enjoyed the changes. I also enjoyed being able to wait in the shade at a nearby restaurant while we were taking turns riding. Chloe had space to play too, which she loved. Who knew that letting her climb on and off a chair would be the greatest thing?

It was SOOOOO crowded in the late afternoon/early evening. Like crazy. We just kind of walked around and tried to ride a couple of things, but for some reason both of them were shut down at the time! It was kind of a bummer, but we were able to catch the end of Mickey’s Soundsational Parade before going back to Big Thunder Mountain Railroad.

After that we were pretty beat, it was about 6:30pm, I had to be up at 3:30am and we had been at the park for 10 hours with a toddler. We wanted to stay for the Main Street Electrical Parade, but that just wasn’t going to happen. We did manage to get something even better though. Another chance with Minnie! 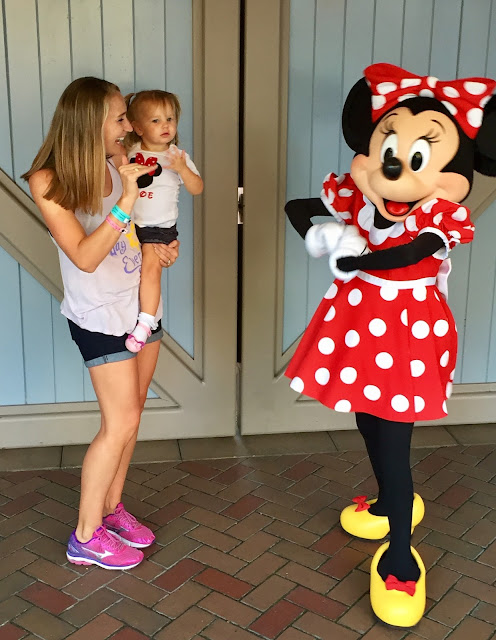 This time, Chloe was obsessed! She gave Minnie the biggest up and even blew her kisses. It was so sweet, and it was easily the best part of my day. 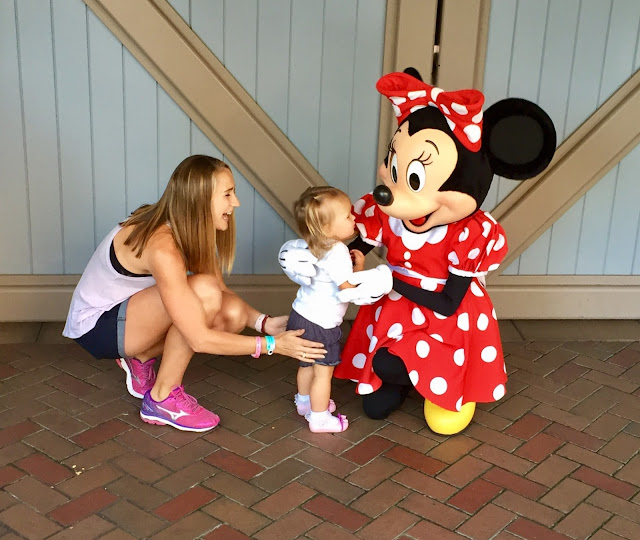 But to make things even better, we found Mickey too! Actually we waited an extra 15 minutes to see Mickey because he wasn’t out as we were leaving. Since she did so well with Minnie and was asking about Mickey, we had to wait! 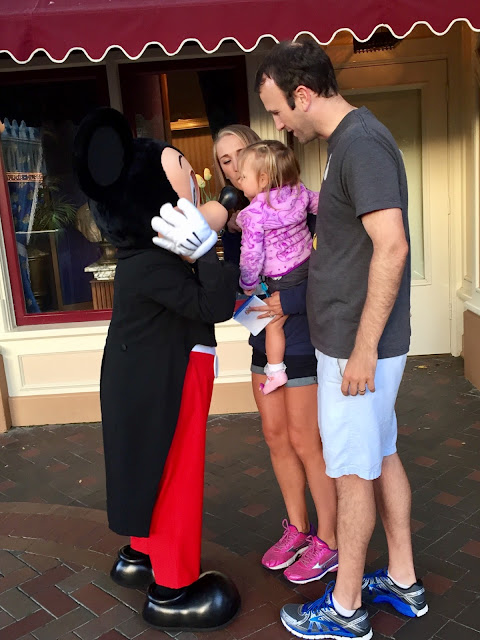 Best decision ever! She gave him kisses and smiled her biggest and best smile all day! 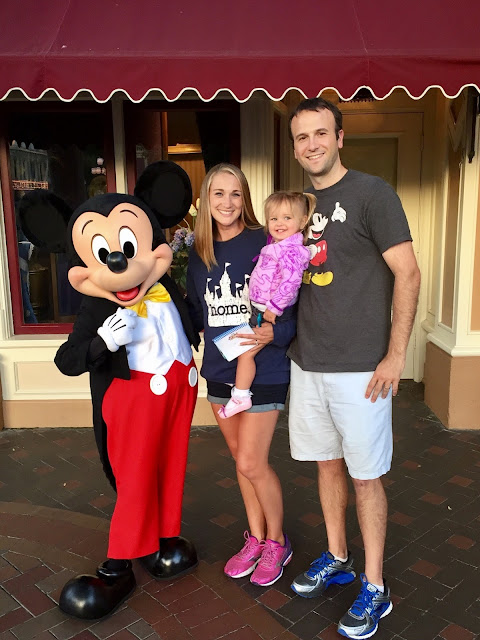 If that smile isn’t pure joy, I don’t know what is?! Definitely the best ending to a very magical day at Disney!

What is your favorite part about the Disney parks? Rides, characters, food?
Mine is definitely meeting the characters…with or without kids!