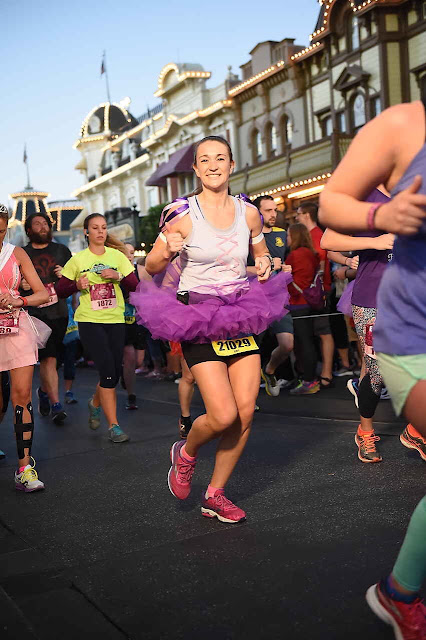 Ahhh I’m finally getting around to writing my half marathon recap. It’s been busy around here the past few weeks, and getting everything together and actually writing thing down has taken a bit longer than usual. Luckily I love my Princess Half Marathon so much that I remember the whole race!

As usual for runDisney races, it started really early. Like super dark and early. This year it was a little bit later because we decided to skip the bus and Julie drove us there! That let us sleep in another 30 minutes, so our alarms went off at 3:30am instead of 3. It was glorious. 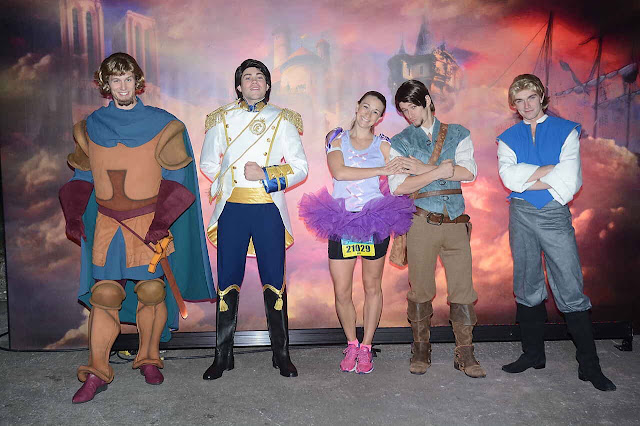 Now let’s get to the actual race! After we made the long trek from the parking lot and a pit stop at the port-o-potties, we all parted ways and went to our respective corrals. I started in Corral D. I submitted a 2:06 half marathon time from the year before in case you’re wondering! The best things about starting in D is that we take off only a few minutes after the official start and the lines aren’t too long for pictures!

My first picture opp was around mile 2 with the PRINCES! I’ve never actually had the patience to wait for them. Since they’re pretty much the second photo opp, the line is always a bit longer. This year it wasn’t too bad, so I jumped in. Plus I needed a picture with Flynn Rider since I was Rapunzel after all! He totally flirted with me. 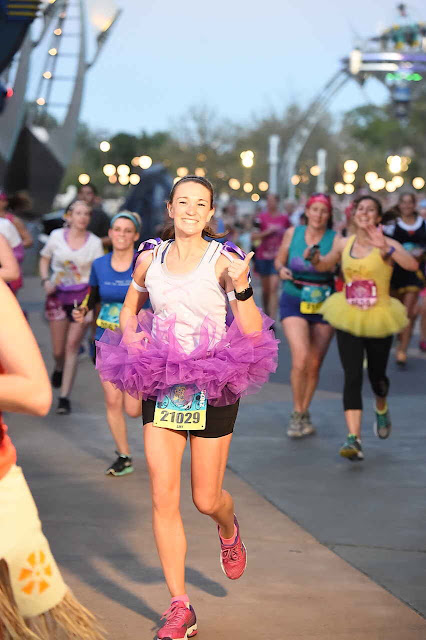 The weather was pretty awesome as far as Orlando goes. It started off cool and humid; upper 50’s and pretty darn humid. I’m used to the humidity living in Houston. As long as it isn’t too hot, I’ve learned to live with it. As the race went on, the clouds and some of the humidity burned off. It was actually a gorgeous day without a cloud in the sky by about mile 8. That was when I was wishing I had wore my visor. But I’m jumping ahead. Let’s get back to the best part of the race: Magic Kingdom.

We ran into Magic Kingdom right around mile 5. You get to run in right through Main Street USA! As you make a slight turn to the right, you begin running right at Cinderella’s Castle! It never gets old y’all. Just before the castle, we hung a right and went into Tomorrowland. You can see the Tomorrowland entrance above me in the picture above. 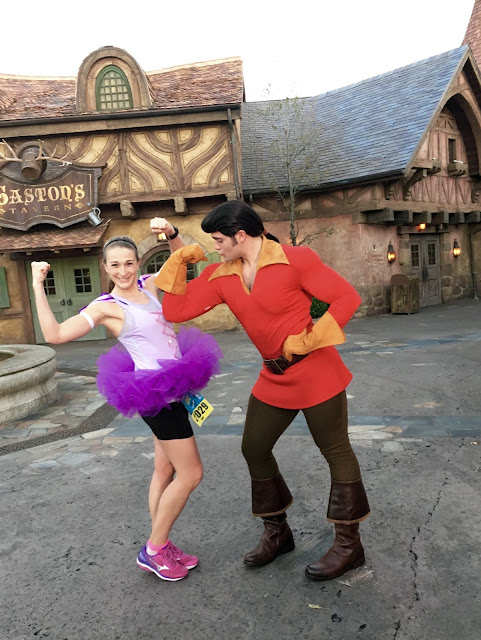 This year the course was a little different. It took us around the carousel and instead of back through the castle, we went by Ariel’s Grotto, Gaston’s Tavern and the Beast’s Castle! It was a nice little change, and of course there were characters! I saw Gaston and knew I had to stop. The last time I got a picture with him was when I ran my very first Princess half in 2011! His line was definitely longer and worth every second I waited for him. Word for the wise: always stop for Gaston! 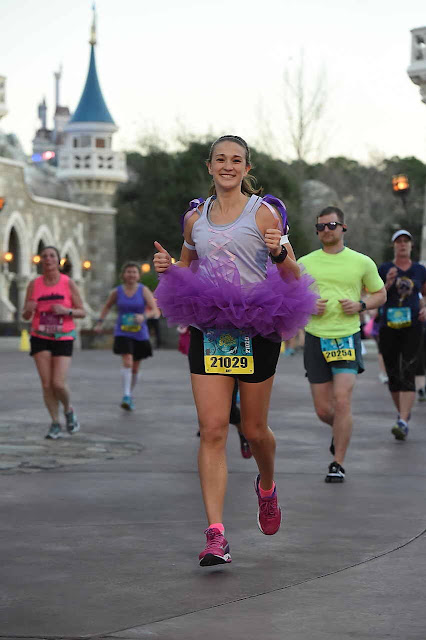 After Gaston was THE BEAST! Unfortunately, I was too impatient and didn’t want to wait in another line. I had too much excited energy and just needed to go, so instead I just trotted right through Cinderella’s Castle. 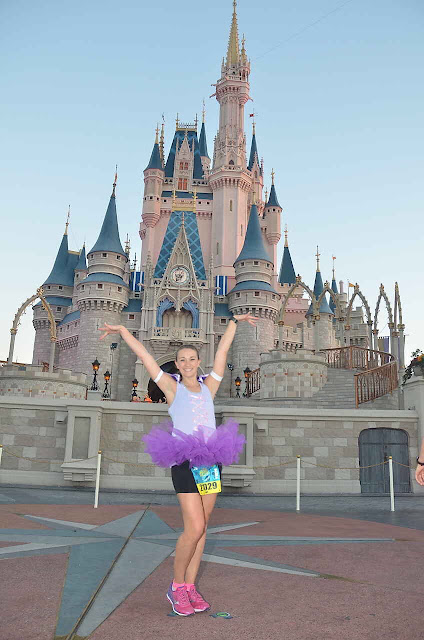 Of course a quick picture was necessary. No lines make for easy picture stops! After the castle, we headed into Frontierland. I saw Woody and his short line, considered stoping for a quick pictures, and then decided to just keep going. I got a picture with him the year before, so I just kept running! {Maybe I should have been Dory 🙂} 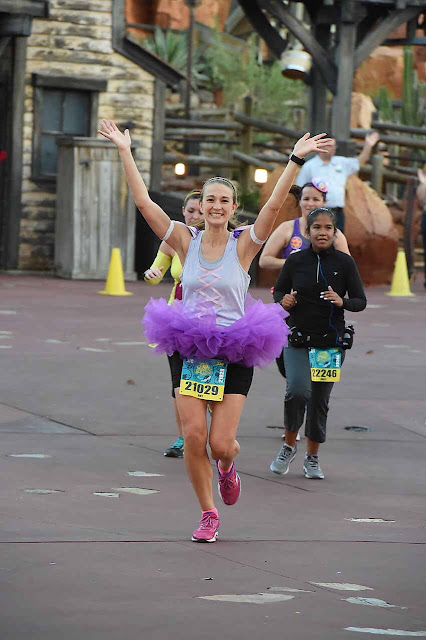 Frontierland was the end of the Magic Kingdom route. It was just about mile 6 as we exited the park through one of the backstage cast entrances! As we left, there were princesses! Cinderella and Snow White were hanging out with their men for pictures. Again, I decided to run by. If I had been dressed as them or if Rapunzel had been there, I would have stopped. Instead I just kept running… 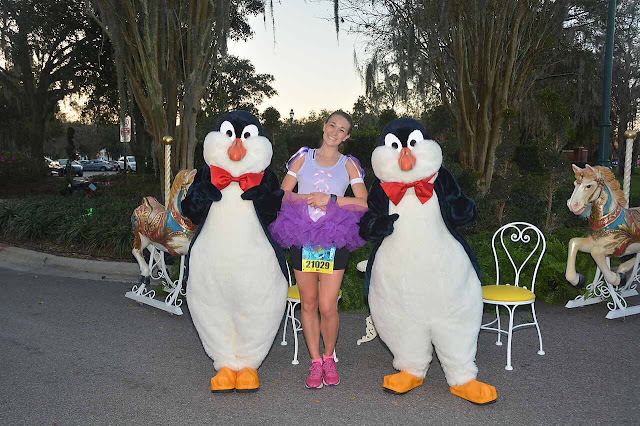 But don’t worry, I still stopped for plenty of pictures! After Magic Kingdom, you run by the resorts and the golf course. Just outside of The Grand Floridian were the Mary Poppins Penguins…with no line! I hopped in and out of the frame and was on my way. But before I could get to far, I saw these guys… 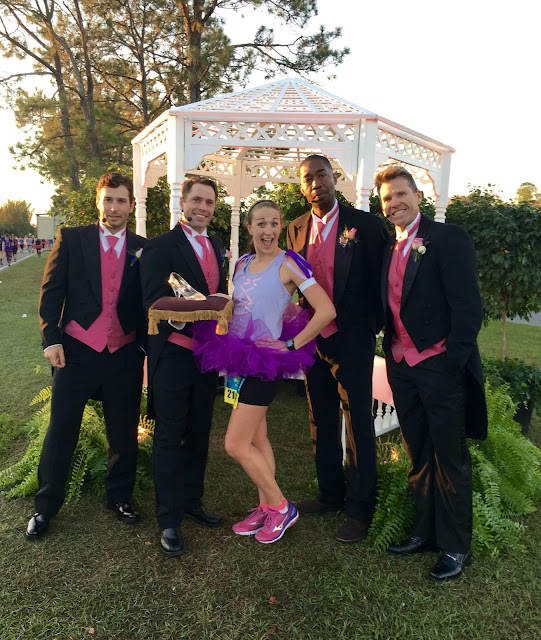 …and they had a glass slipper so I decided to jump in for another no line picture! Apparently they were just across from the wedding pavilion. Kind of weird, maybe a little creepy, so I just went for it.

After these pictures, things kind of slowed down. There were less characters, the sun was out and there were a lot of overpasses. Ugh overpasses. They’re sloped so I hurts your feet, knees and ankles. Plus they’re uphill, so it’s kind of a lose lose. The green army men are there to cheer you on though. Actually, they’re there to yell at you and tell you to keep moving. It’s all about motivation right? Once you get over the third overpass, you find yourself heading straight towards Epcot! 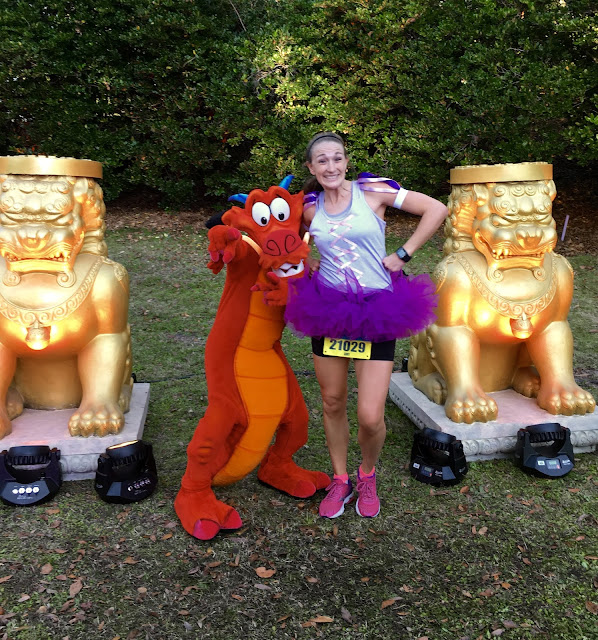 Just before we entered into Epcot I saw Mushu!!! I have never, ever seen Mushu! I was so excited and there were only a couple of people in line. Can you see the awesome awkward, excitement on my face? After Mushu, I ran right into Epcot. The course takes us right in and around the Spaceship Earth ball aka the giant golf ball. As I was circling around, I saw Princess Daisy. She was at about mile 12, so most people weren’t really stopping. I couldn’t pass up Daisy. I’m so glad I didn’t because this is Chloe’s favorite picture on my phone. She constantly asks to see Daisy and Momma! 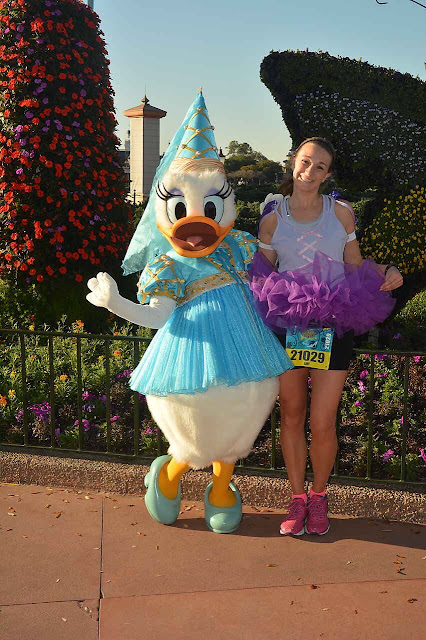 As I circled back around, I jumped in for a picture in front of the ball! Because…why not? 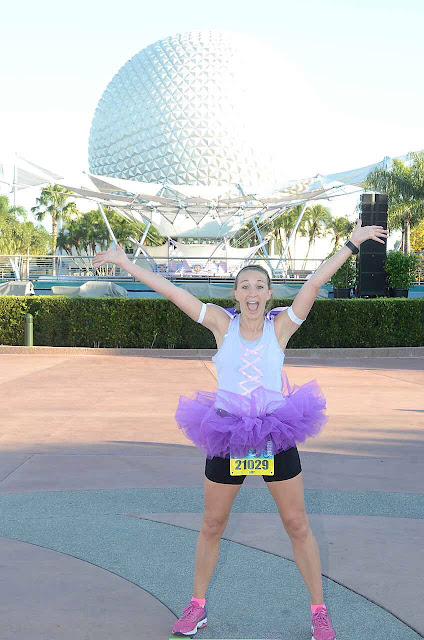 The energy had me feeling all the feels. I picked up the pace and just smiled the last half mile. 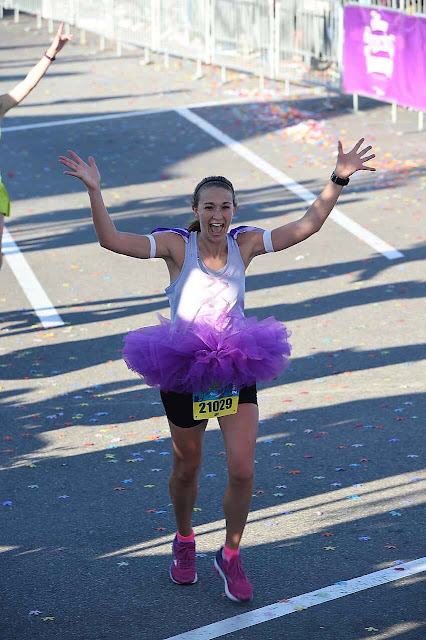 As I was about to cross the finish line, I saw Prince Mickey and went in for a high five which he gladly returned. 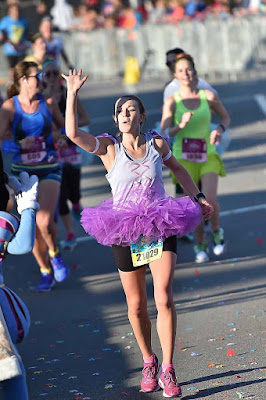 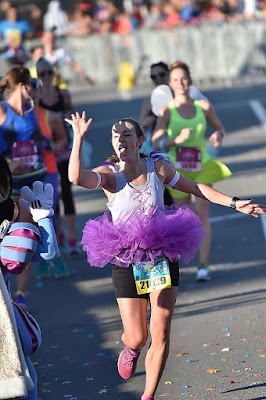 Then I crossed the finish line!!!! Arms in the air and happy to be done. 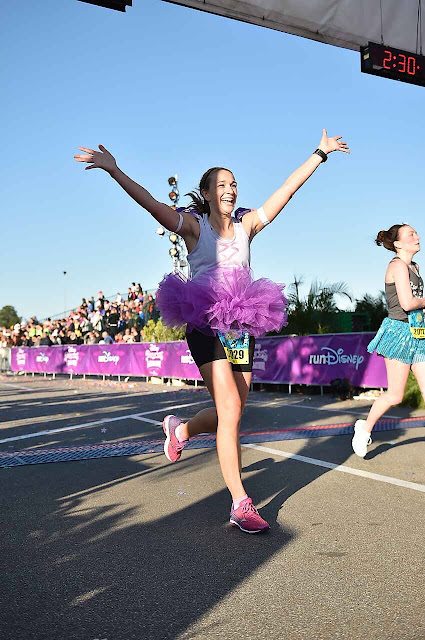 I’ll admit that even though this was my first half marathon in just over a year, it felt like I had just run one. It was like I hadn’t taken a year off. I forgot the awesome excitement and joy I get from running races. The accomplishment I feel as I cross the finish line. I forgot how much I loved it! 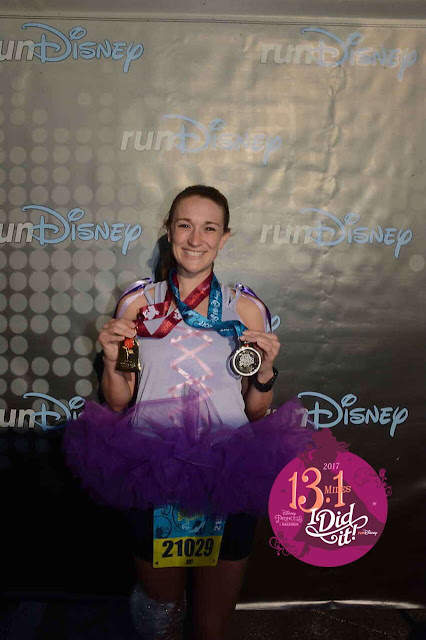 After I finished, I got my medals and hit the first aid station. I decided to get some ice for my knee because it was sore from the sloped overpasses. I decided it was better safe then sorry.

I officially finished in 2:22:54, but I stopped my watch while I was waiting in line just so I could see what my time would have been. I’m a numbers person, what can I say? 2:07:51 was my watch time…I’ll take it!

While I was waiting for the girls to finish, I decided to wait in line to meet Pocahontas! 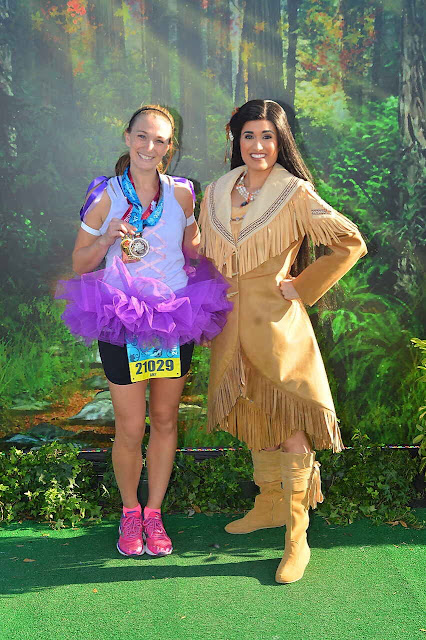 She was amazing and wearing her gorgeous winter outfit which I’ve never seen before! After my picture Julie finished, so we grabbed a picture together and then Ali finished! 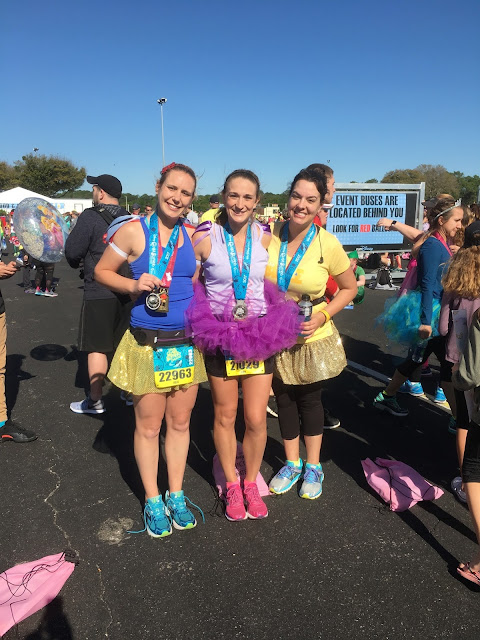 Annual princess pictures with my best friends are my absolute favorite! It will never get old and we’re already planning next year’s adventure!

That’s all I have for today. The baby is waking up and I’ve got to get to the gym to teach my Monday afternoon classes. I’m pretty sure I’ll be in a good mood the rest of the day just remembering the awesomeness of this weekend!

Oh but before I go, I have some awesome news…JP is taking me and Chloe to Disneyland so I can run the Tinkerbell Half Marathon on Mother’s Day! I have the coolest husband ever and can’t wait to take a mini family vacation in May!