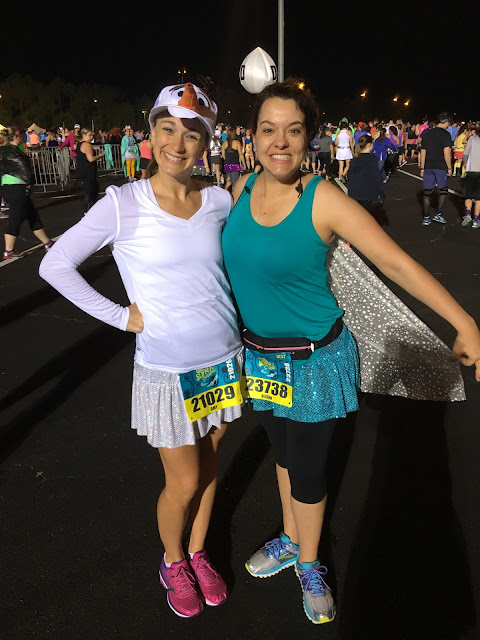 Lately I’ve been running a lot. If you follow me on Instagram, then you’ve seen lots of pictures from my running escapades! Last year I ran back to back half marathons for Disney and Houston. This year I ran back to back 10Ks for Disney and Rodeo Run! It’s safe to say the 10K distance is much more manageable and enjoyable for the whole run. I’m actually itching to run another and found one on April 1st that I may convince JP to run with me.

Now let’s take a look back at my last two 10K adventures!

First was the Disney Princess Enchanted 10K. {If you missed my 5K post, check it out.} The 10K was the second of three races in three days for the Glass Slipper Challenge. As with all Disney races, it started dark and early. Really dark and really early. 5:30am is when the fireworks went of to start the race. I ran the 5K with Julie, but for the 10K we ran separately. I was in Corral A and Julie and Ali were a little bit further back, so just before the race, we parted ways.

The start of the race is along some of the many roads that go between the Disney parks and resorts. As I started running at mile one, I saw Princess Elena of Avalor. Her line was kind of long since she was the first character, but I had to stop. Chloe loves the songs from her show and I had to snag a pic with this new, rare character! Plus she’s a princess and it was princess weekend after all! 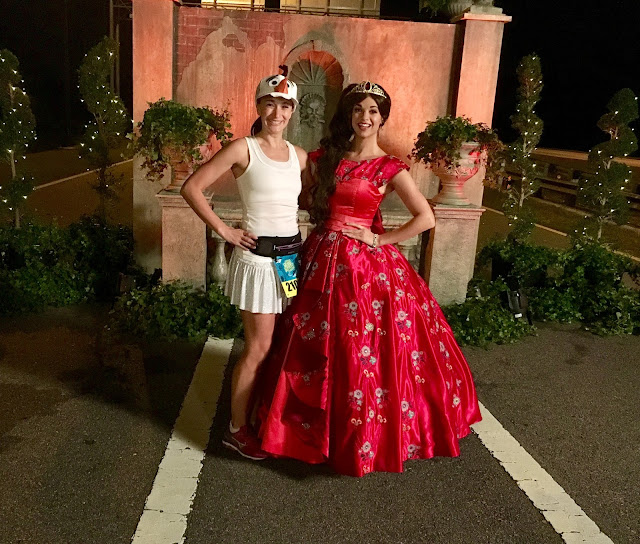 The next two miles of the race were continued along the roads, but just past mile 3 we entered into Epcot’s backstage area. By mile 3.5 we were immersed in the countries of Epcot! We entered in between Norway and China. I was a little bummed because I was hoping to snap a selfie with the Elsa and Anna topiaries in Norway, but we headed the opposite direction. I got over it quickly because as soon I got to Germany I saw Dopey with only a few people in line. 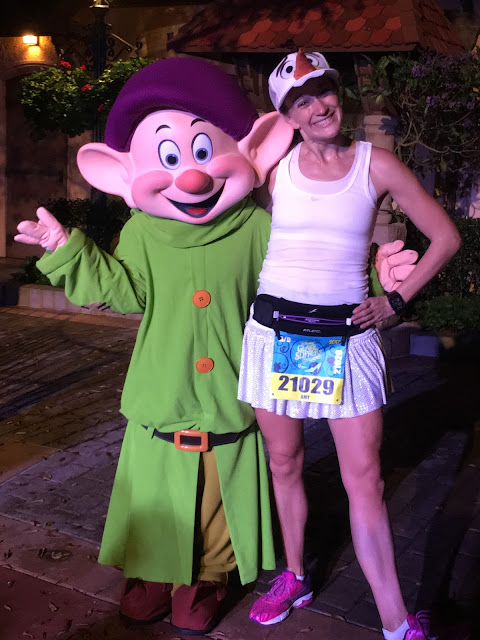 As you can see, I jumped in line with the adorable dwarf, snapped a pic and was back on my way! Just a bit farther down was Pinocchio and Geppeto! I’ve never seen them out, so I had to wait in a short line to see them. Fun fact: I LOVED Pinocchio as a toddler and called him Pochanoia. May mom loves to tell me that story. 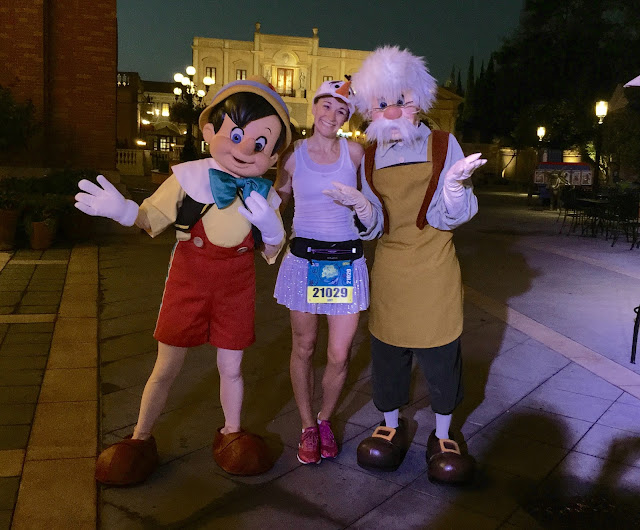 After my back to back pictures, I kept on running. Around the countries we went! I saw a place you could take pictures with giant bottles of champagne in France, but I was cruising along after having just stopped twice and decided not to. I’m kind of wishing I would have. I do love champagne after all! I was also looking forward to the next part of the race, running down the boardwalk! Nerd alert: Just before the boardwalk was the 4th mile marker, when I saw it, I was super excited that it was 4 not 5 because I was having so much fun! Yes, that’s probably something I should keep to myself, so feel free to judge me.

I loved running along the boardwalk. I’ve never really been over there, so it was all so new to me! The Genie was hanging out for pictures along the boardwalk, but since I got one with him last year I decided to pass him by. The boardwalk portion was about a mile and then we popped back out to run through the UK and Canada before heading into Future World. The FW portion of the run was short and sweet. We got to run right by the Spaceship Earth Ball and to the finish line!

My watch time was 1:00:39. I stopped it during the waits for pictures to get a better idea of my pace while I was running. My official time was 1:16:23 which made sense with my 3 pictures. I definitely waited in a long line for Elena and it was worth it! 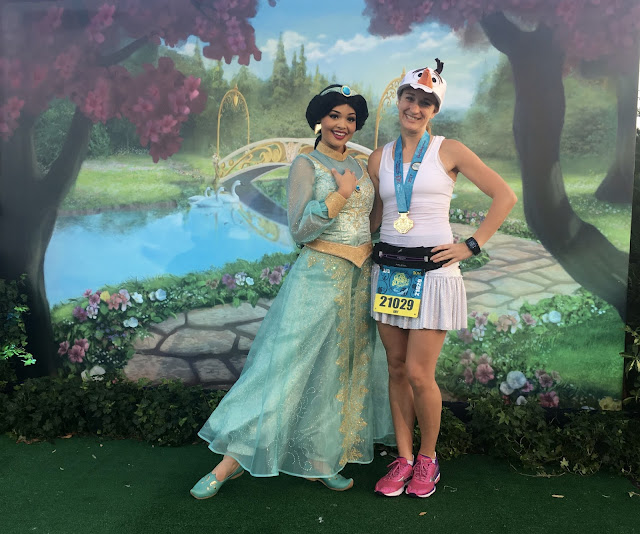 After the race, there are princesses out to take pictures with too! Of course the lines are long, but I had some time to kill since Julie and Ali started in later corrals. I was so excited to get this picture with Jasmine! I had never met her before!!!

Once the girls finished, we had to get one of all of us together! Two races down and one to go! 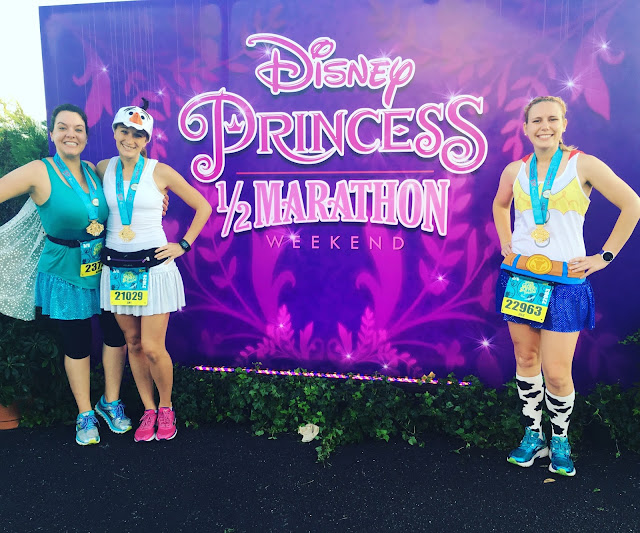 Now let’s switch gears. Away from Disney and back to Houston! Last weekend, I ran the Rodeo 10K with my friend Rachael! {She’s going to do princess weekend with us next year!} We had a goal to finish just under an hour, but the warm, humid weather kind of put a damper on that. Not to mention the hills! 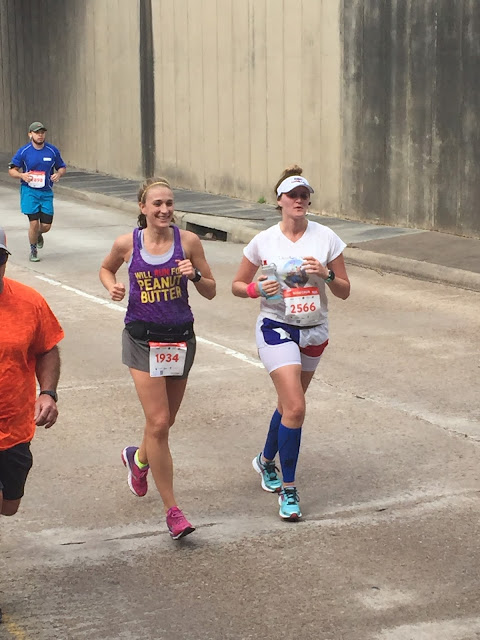 Just like most races that take place in Houston, this one was run up and down Allen Parkway. This is right by my old house. Literally a mile away, so this is where I trained for the past 5 years. If you’re not used to the man made hills along the bayou, then it makes for a challenging route. Just kidding, even if you are used to them, it’s still challenging. It’s actually the last couple of miles for the marathon route which is KILLER! They call it Allen Walkway because people’s legs just can’t always run up those hills by mile 23.

For those of you from Houston, we started at Sam Houston Park, did a little snaking through downtown for the first mile and then set out down Allen Parkway. We ran all the way down to Shephard and U-turned back around. We finished at Elenor Tinsley Park where the amphitheater was built. JP was waiting for us at Montrose to cheer us on both ways. On the way back, he decided to just run along with us to the finish. It was like half a mile and he needed to meet us there anyway! 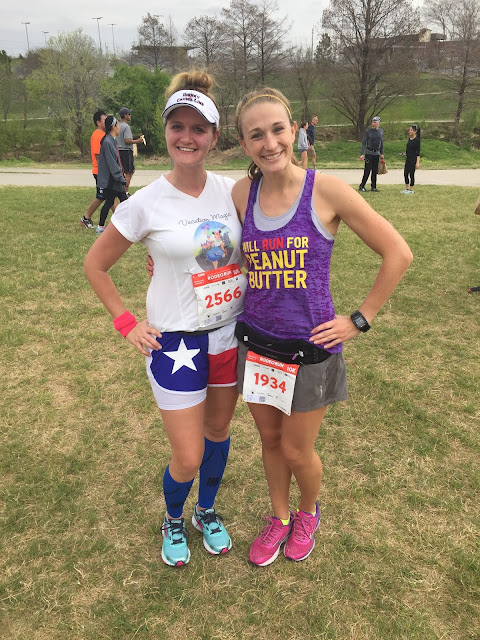 We finished in 1:03:21. Only 3 minutes shy from Rachael’s original goal! I loved being able to help pace Rachael and I hope we can try again come fall. It’s getting too warm around here to shoot for PRs already. Thanks Houston and your hot, muggy weather.

On the plus side, it gave us an hour to catch up and talk about all the things. I told her all about my Disney races and park adventures, and we even did a little scheming for our race weekend next year! {P.S. If you ever want to plan a Disney trip, Rachael is a pro! She’s a Disney vacation planner, so just let me know and I’ll hook you up!} 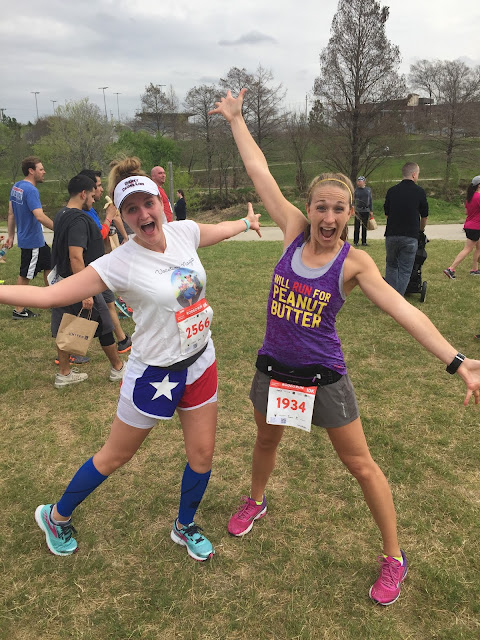 So there you have it, two weekends and two 10Ks! Like I said, I’m itching to do another while I’m on this running train. Hopefully I’ll be able to sneak another one in before summer! This distance is my current favorite. It’s still long enough to feel really accomplished afterwards, but not so long that you’re pooped and sore through the next day!

What’s your favorite race distance? Any races coming up?