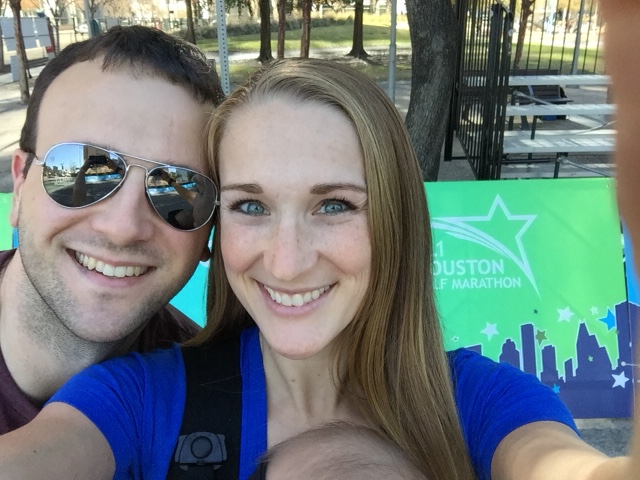 EXPO
The race expo was as always at George R. Brown Convention Center. It’s nice that it’s there because that’s also where you’re supposed to go race day morning. It gives you the opportunity to figure out where to park on race day and where you need to be if you haven’t run the race before. Luckily for us, this is my 6th year and JP’s 3rd to run in Houston. We decided to tackle the expo Friday late afternoon around 3:30pm. 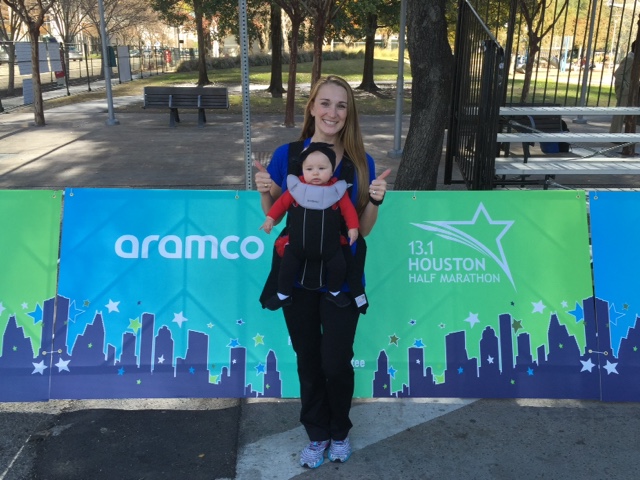 I was very impressed by this year’s expo. The Houston Marathon expo usually doesn’t disappoint. There are always lots of vendors, tons of freebies and quite a few samples, but this year’s just seemed to be even better. The vendors weren’t necessarily different, and samples were about the same; a few hydration samples, Cliff bar and some fruit can always be expected. But the freebies and interactive activities were on point. Aramco handed out nice drawstring bags, ABB handed out gloves for race day that you can throw away, Chevron handed out posters and bam bam sticks for supporters in the crowds and Dick’s Sporting Goods had all sorts of stuff! There were giant 13.1 or 26.2 numbers that you could take pictures with. They even included signs to make for your pictures! Dick’s also had a giant dice game that you rolled to see what activity you got like push ups, balancing, hopping, sit ups, etc. Once you completed the activity based on what your age group should be capable of completing, you rolled another dice to see what prize you won! I thought it was a fun addition to the whole expo experience. The expo itself was organized and set up beautifully. We didn’t have any trouble with packet pick up or getting our t-shirts. As always, the expo flow was smooth and they really had it all together. Since we went Friday, it was much less crowded which I’m sure made the experience even better for us. 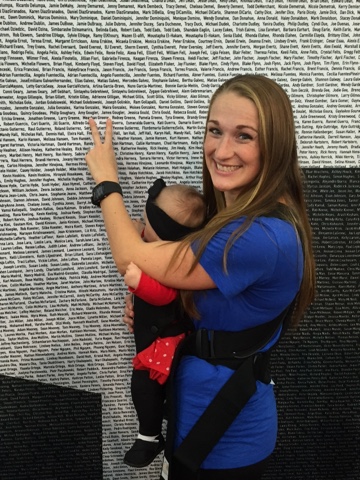 RACE DAY
Race day morning, our alarm went off at 5:00am. Kind of early, but nothing out of the ordinary for me. Not to mention, this was 2 hours later than our Disney wake up call. We got up, moving an quickly got ready. Chloe spent the night at my parents’ house (her first night away from momma!), so I had to pump before we took off. Oh the joys of being a breastfeeding momma. But trust me, it’s beyond worth it! We had laid our gear out the night before, so getting ready was a breeze and we were out the door by 5:45am.

We live just outside of downtown, so it was an easy 10 minute drive in to find parking. Beware! Parking can be super expensive around the convention center.. There were lots for up to $30. If you don’t mind walking a little further post race, then you can go down some side streets and find parking for closer to $15. Still expensive, but half as much. Since we were running the half, it didn’t bother me to walk a bit farther. Had I been running the full, I would have requested a better parking spot for sure! Once we parked, we briskly walked in the 40 degree air to George R Brown. Signs were out leading the way, so we had no trouble corralling our way in. Once inside, it was organized chaos. It was chaotic be causes there were so many runners. The lines for the port-o-potties were pretty long, but we had time so we waited. By the time we were done, we decided to just head out and get to our corral! 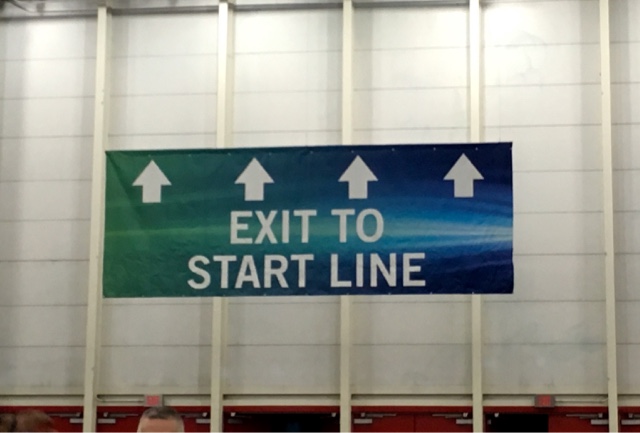 It was 6:40am at this point and Corral A just closed its gates. We were in Corral B and they didn’t have nearly enough people checking bibs because it took us 5 minutes just to get in! It was definitely a mess, but we made it in just in time for the National Anthem to start. This at least minimized the
amount of standing around in the cold. We got a quick stretch in and were ready to go! 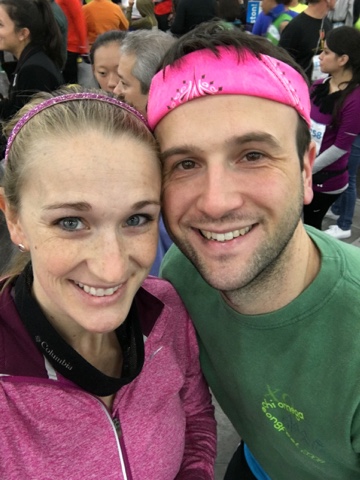 The race run went off at 7:00am and we crossed the start line at 7:12! Our plan was to run a 10:00 pace per mile, similar to what we did at Disney the week before. We knew it was slower than our usual pace, but manageable given our lack of training. The weather was in our favor! It was cold, but the sun was out and there was low humidity. This is so rare for Houston but a welcome treat. I think this and the adrenaline of race day that had us running a bit faster than planned. Nothing crazy, 9:45 for the first mile. We felt fine, so I just held us at that pace for a bit. Just after the first mile, my shoe came untied! That was weird since I had literally double knotted them in the convention center! We had to pull over so I could quickly re-tie and tuck in my shoe laces. It worked because I didn’t have any problems after that!
Mile 2 was a bit slower thanks to our random pit stop, but other than that, we maintained roughly a 9:50 pace. It was fun running through the streets that we drive down almost every day! This was my 6th Houston marathon weekend race. I ran the half in 2011 & 2012, the full in 2013 & 2014 and back to the half in 2015 & 2016. Every year I love the course and it never gets old. The crowds in Houston are AMAZING! There are people throughout a majority of the course supporting all the runners. It’s pretty awesome and it’s part of the reason I keep coming. Back year after year.
At mile 8 near Rice University and the medical center, the marathoners veer right and the half marathoners keep going straight! It is such a wonderful sight as a half marathoner. It’s nice to know that I didn’t sign up to run 26.2 miles this year. I wouldn’t have been prepared at all. Once the half marathoners are on our own, we head down Montrose Boulevard. These are mine and JPs stomping grounds! We run several miles down Montrose and even pass our street before hitting Mile 11 and turning onto Allen Parkway for the home stretch. At Mile 11, I was feeling fantastic! We had kept our steady pace for a while, but here I picked up a bit. I didn’t realize it, but JP did! He told me that if I was feeling good to just keep going. So I did.
I saw some friends from college as we turned onto Allen and I was in the zone. I picked up to a 9:20-9:30 pace. Still slower than I used to run, but faster then I had been! I was able to maintain it all the way into downtown. When the finish line was in sight, I picked it up and sped into the finish! I don’t know where the extra energy came from, but it felt amazing. I had such a rush as I crossed the finish line. My official race time was 2:06:53 and JP came in only 45 seconds after me! We shaved 6 minutes off of our Disney watch time in just one week! 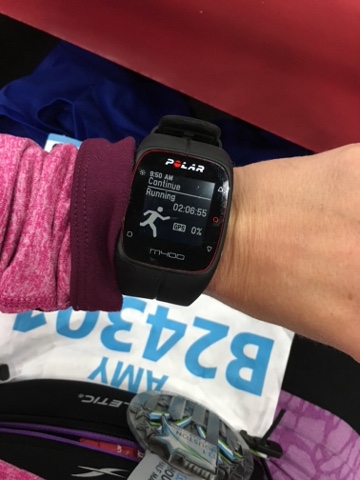 We were definitely sore and achy after our finish, so we hobbled into the convention center to get all our gear! Finisher shirts, bananas, ice cream, hot breakfast, chocolate milk, and so much more! The hHouston marathon doesn’t disappoint when it comes to post race goodies. After we stretched, ate breakfast and took a necessary finisher selfie, we headed to the car so we could get home to our baby girl! I was so proud of us yet again for another strong race! It’s wonderful to be able to do things like this with my husband. We haven’t let having a baby rule our lives. We still do the things we love, hang out with friends and enjoy life…it’s just a little different. And we may need a little extra help. Life is so much better with her in it and she makes me better! I’ve officially ran 2 half marathons post baby and I’m ready to keep going and keep improving.
As always, I’m ready to sign up for Houston again next year! They put on too good of a race not to keep coming back for more! 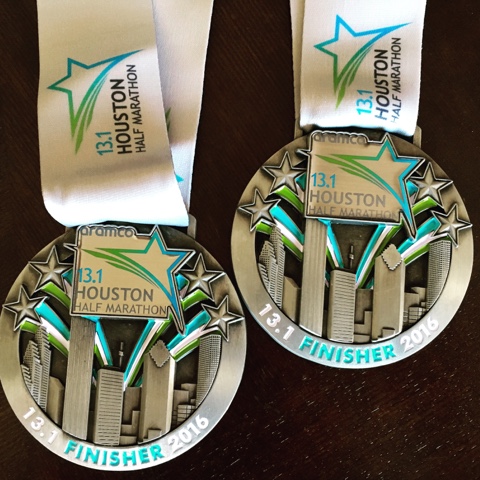