We are LONG overdue for a race recap around here! After my ankle injury last February and the fact that I was pregnant, running was taken from my “able to do” list for the remainder of my pregnancy. The last race I ran was in February at the 2015 Disney princess race and let’s be real, I didn’t run at all. I walked thanks to spraining my ankle a week prior.

Thankfully, I’ve had a full recovery and I’m back in the game. Training was VERY hard for me. Getting back into running is not an easy task. Especially coming off of an injury and childbirth. Once my ankle healed, I had some serious hip issues that luckily have resolved themselves, but could potentially rear their ugly head if I’m not careful. But somehow, someway, I was able to get into running condition with little time to spare. I ran 6 miles the weekend before the race and had to count of my experience with running and pacing to get me through my first 13.1 post baby! 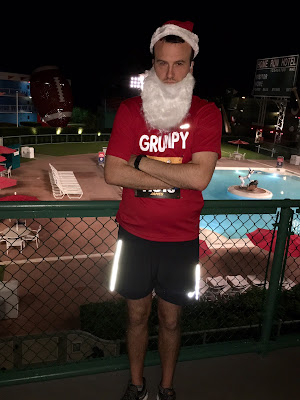 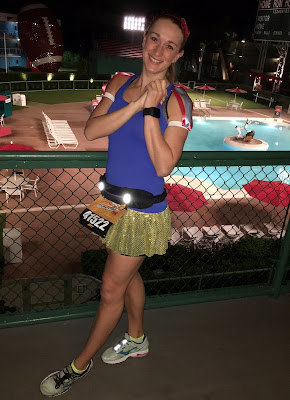 Our morning started dark and early at 3:00am! Yikes. We quietly got ready while Chloe and Julie slept in our room. We laid out all of our Snow White and Grumpy gear the night before to make things as easy as possible. At 3:30 we were outside our room where we met up with Ali. She took a few pictures for us before going into our room to help Julie with Chloe while we were out running!

We were on a bus by 3:40am to go to the runner drop off area. runDisney has amazing transportation from the resorts to the runner area and back again. This year we seemed to get there a little early. We were there by 4:00am, so we took a few pictures and took everything in before we took the 15 minute walk over to the starting corals. 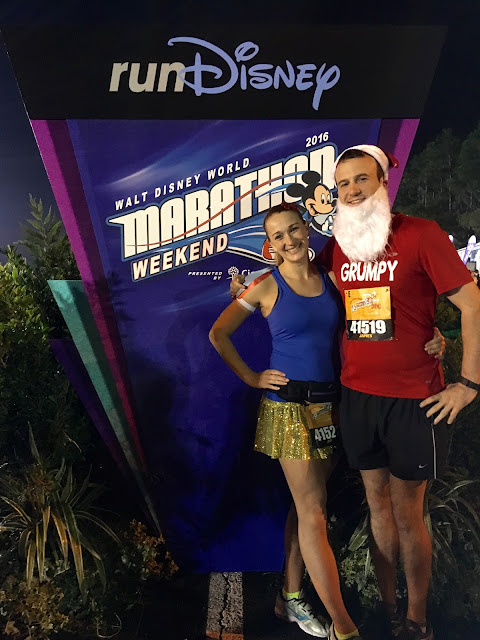 That’s right, before every runDisney race be prepared for a walking warm up! It’s really not a bad walk and it gives you time to mentally prepare and get excited about the race! 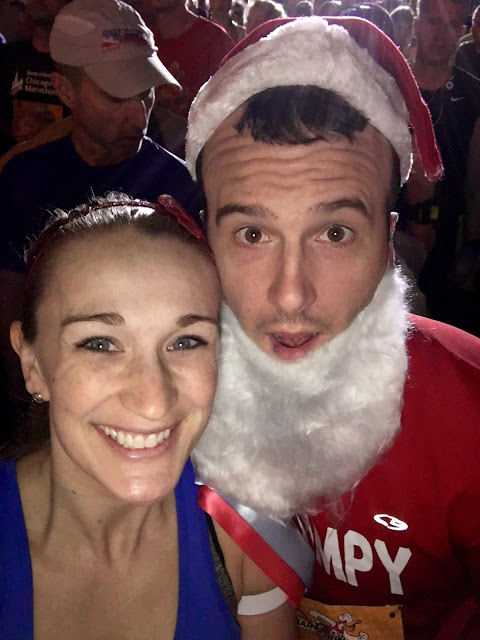 The corrals are labeled A-P and are assigned based on the finish time you provided when you signed up. If you don’t provide a previous race finish time, then you’ll be in one of the later corrals. JP and I started in E which was perfect. Since we were one of the earlier corrals, we didn’t have to worry about too many crowds or crazy long lines for characters. 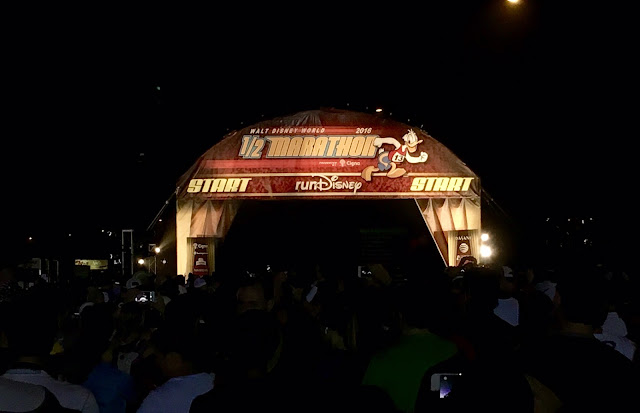 RunDisney is always very diligent about their start times, so at 5:30am sharp, corral A was off and at ’em! There are roughly 2 minutes between the start of each corral, so a mere 10 minutes later we were off! 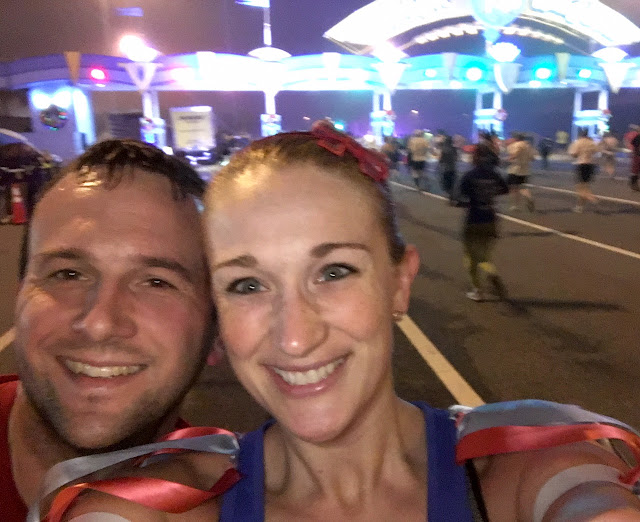 It was dark and incredibly foggy on race day. Luckily the temps dropped to upper 50’s and didn’t get higher than 62 while we were running. That fog and humidity was dense though. It’s a good thing we train in Houston and are used to the misery of running in those conditions. It makes it less miserable really.

Just after mile 2 we we passing through the Magic Kingdom sign to run through its vast and winding parking lot. We had to stop to get a quick selfie! 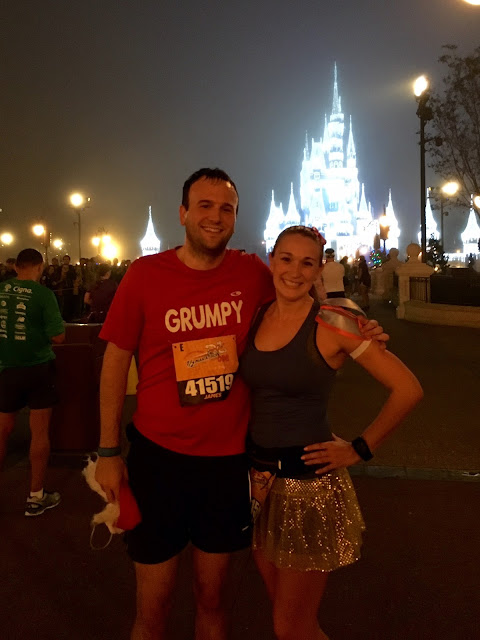 Around mile 5 you run into Magic Kingdom down Main Street, USA! We stopped and asked one of the volunteers to snap a quick picture for us with the castle! Then we were on our way running through Tomorrowland and into Fantasyland. That’s where we stopped to snap a picture with Tweedle Dee, Tweedle Dum and the Queen of Hearts! 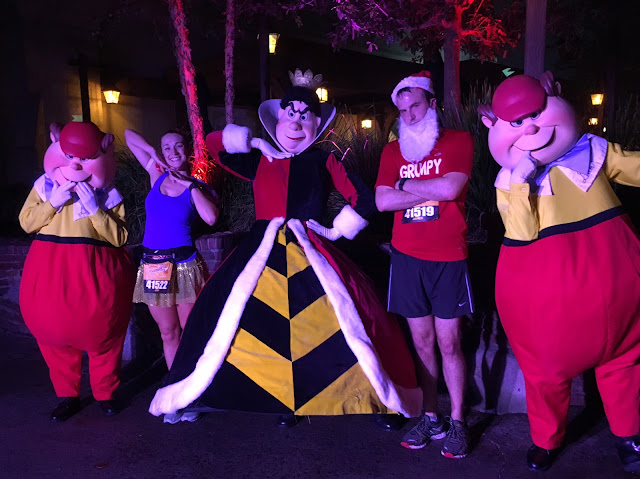 It was a nice quick break while we were in line to shake out our legs and stretch a bit before we were on our way again. It wasn’t long before we were running through the castle and of course I had to stop for a picture! This was a super quick stop and onward ho. 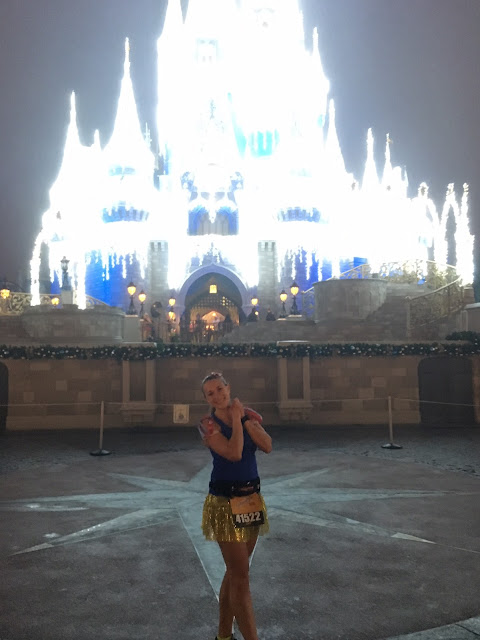 We made our way through Liberty Square to Frontierland where we took a pit stop in the bathrooms there. It’s nice to have a flushable toilet and there’s practically no one in there! Just a helpful tip to anyone doing a runDisney race, wait to potty in the park 🙂 Right around the corner from our potty break was Woody with another super short line, so we jumped in for a picture opp. Stick ’em up! 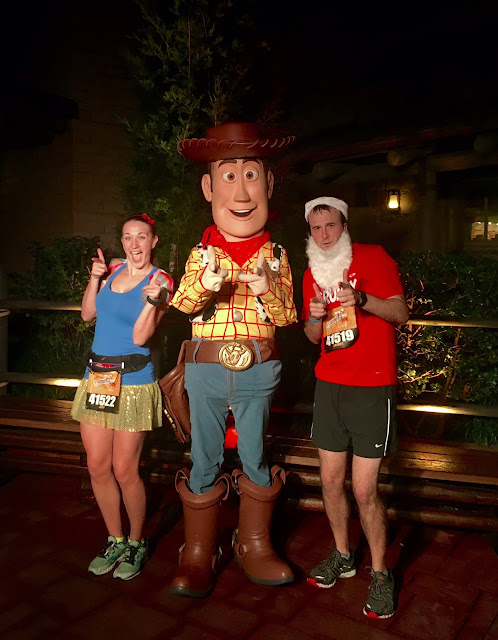 After Woody, we were a little over 6 miles in, and we pretty much made our way out of the park and back onto Disney roads. We passed by a few resorts and saw some other characters, but the lines were really long or we had met the characters at our character brunch the day before. Soon we came across the golf course and Donald was there! Donald is the mascot for the half marathon, so I was excited to get a picture with him. Plus his line wasn’t too long at all. We were between miles 7 and 8, so I’m sure some people just wanted to keep going. Once JP and I got up there, we told Donald we were going golfing! I love how we all set up at different phases of our swings! 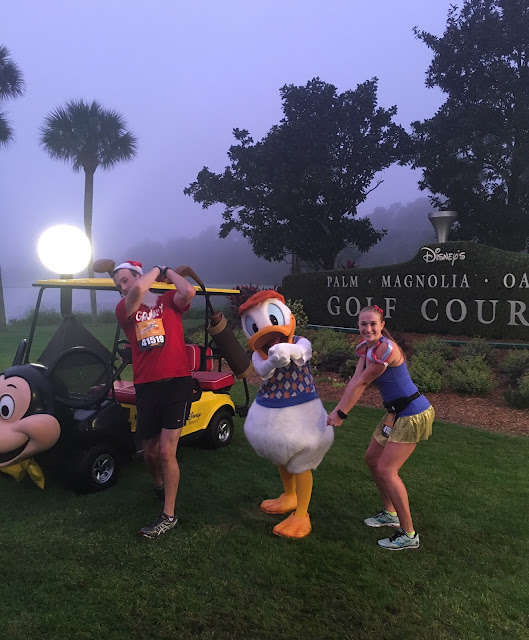 By mile 8, we were still feeling pretty good. Our legs were kind of achy, but our lungs were holding up. Snow White was the mile 8 marker, so we stopped for a quick picture because duh, we were Snow White and Grumpy! There was a volunteer there taking pictures for people which I thought was a great idea. In the past, people just took selfies or asked someone to take a picture for them. I loved that there was a volunteer to help out.

Speaking of runDisney volunteers, they’re amazing! They’re all so helpful, supportive, encouraging and just great. Big thank you shout out to everyone out there who has ever volunteered for a race. You rock and we appreciate you! 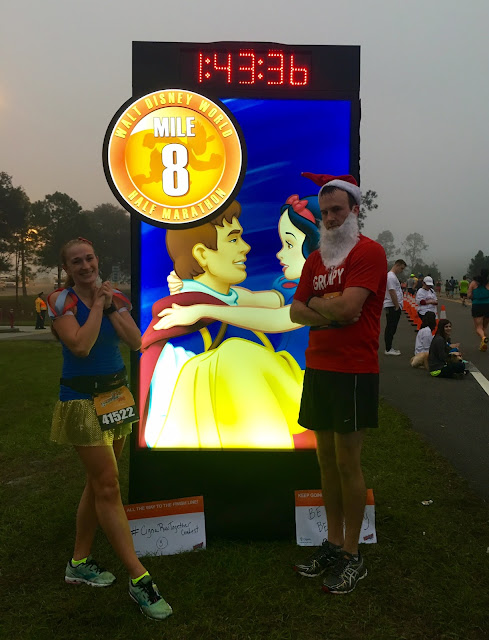 We kept trekking along and started to get more sore. That’s because training was rough for us this time around. At mile 10, we had to make our way around a banked turn that went to an over pass. The uneven hill hurt my feet and hips quite a bit to say the least. There are about 3 of these banked turns on the course. 1 at the beginning and 2 back to back around mile 10/11. We did make it though!

Around mile 12 we finally made our way into Epcot! It’s always nice to be running in the parks because it takes your mind off of the running since there is more to look at. Plus you’re at Disney! It gives you the extra boost you need to finish strong.
Just when we thought we were going to power through to the finish line, we saw Geenie! We had to stop and get a picture with him. 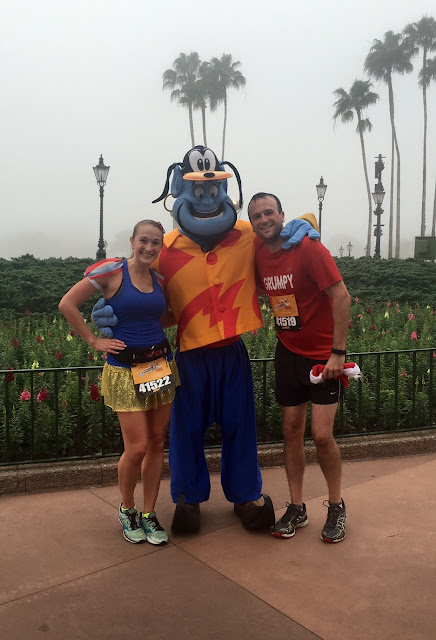 We only had 1/2 a mile to go, so after our quick pic, we went on full steam ahead! We were pretty sore, but maintained a 10:00/mile pace the entire race! We finished in 2:13 according to my watch which I stopped during our picture breaks to keep tally on our actual pace. Our official time was 2:25:50! 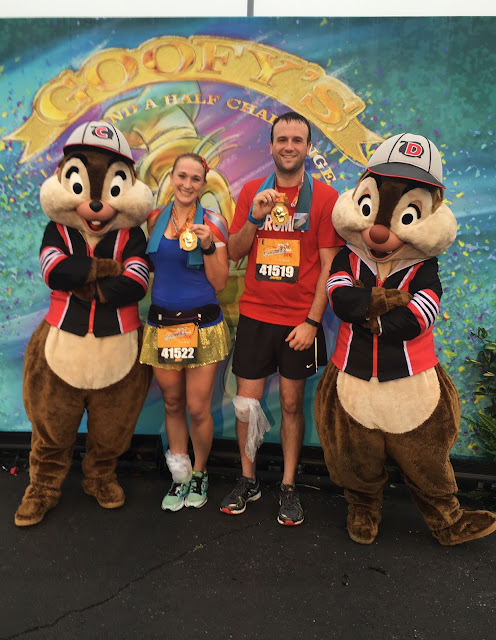 The post race was set up perfectly. There were wet towels to drape over our necks since it was so hot, lots of snacks and fluids to hydrate. The buses back to the resort were quick and painless. Disney has really figured out this racing thing if you ask me! 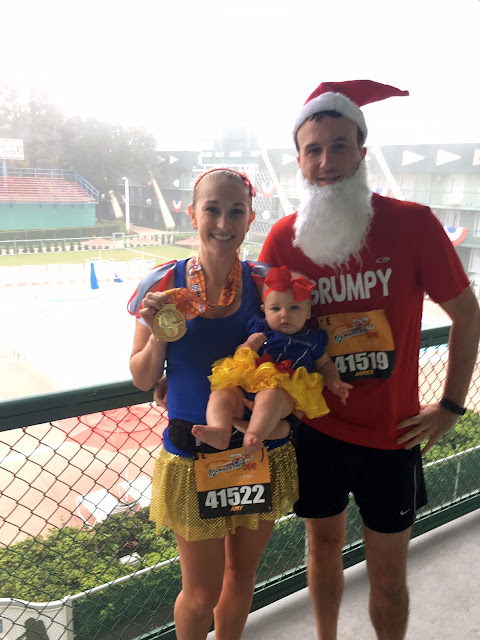 We got back to our rooms and had to get a few pictures with our little Snow White! Ali and Julie had dressed her up for a photo opp! After a shower and some breakfast, we were off to Epcot to eat our way around the world! 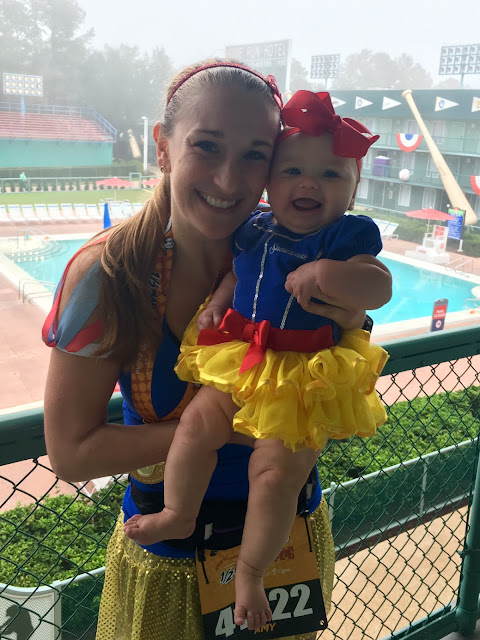 Have you ever done a runDisney race? What’s your favorite part about them if you have?

Ever dressed up for a race? What is your favorite costume?