Happy Friday Eve! I’ve already been up and at ’em, taught a class, ran by Whole Foods and I’m finally sitting at my computer eating my oatmeal and sipping on my iced coffee. Yes, iced because the high is 77 degrees here today. I’m not convinced that Christmas is in two weeks based on this weather! Luckily today I’m talking about another warm and wonderful place, Orlando! I’m excited to share the rest of the pictures from Chloe’s first trip to Disney World!

After our adventures at Magic Kingdom on Friday, we had Hollywood Studios plans for Saturday. But first, Julie had to run a half marathon! Yes, she’s awesome, I know. The course was just a few blocks from her house, so I loaded Chloe into her stroller and put her dog Buck on his leash and set out to watch her. 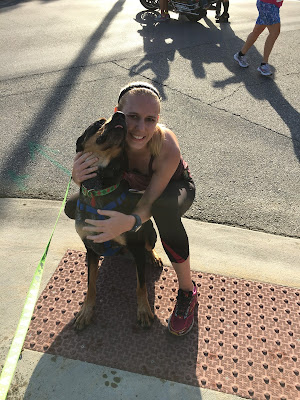 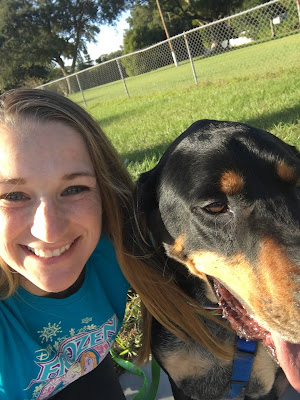 At mile 6 she looked like a champion and was going strong. She ended up finishing in 2:33! Watch out Disney Marathon, Julie’s coming for ya!

After she got cleaned up, we grabbed a quick lunch and headed to Hollywood Studios! First stop…Minnie Mouse! 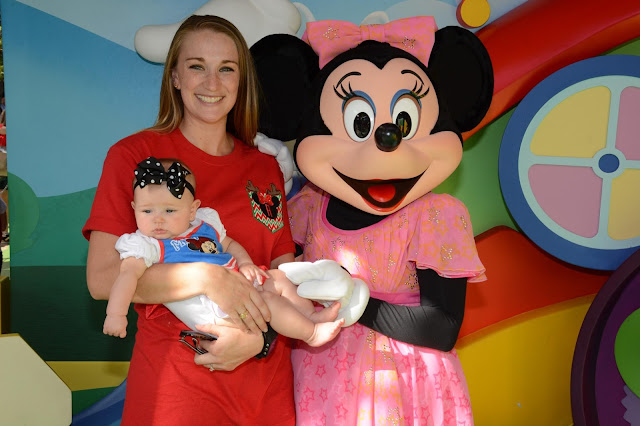 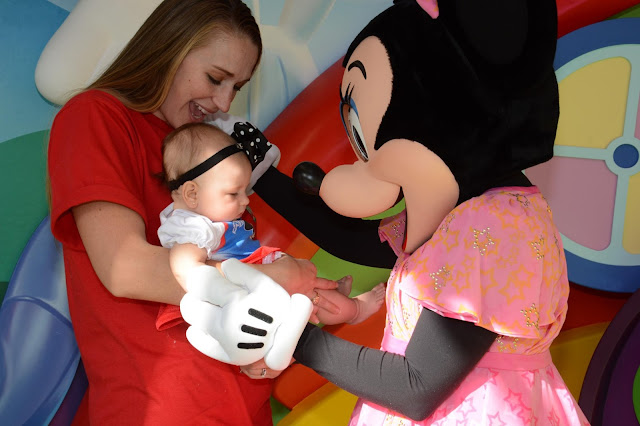 My little Minnie Cheerleader was just staring around at everything taking it all in! It was actually really warm for December with the sun shining bright and beaming down on us, so we jumped in line for the Great Movie Ride since it’s long, we could rest Julie’s legs and it was inside! Yay air conditioning. 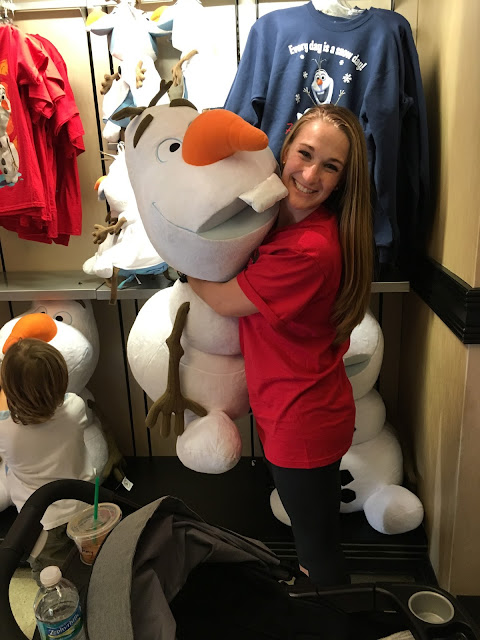 Then we went and saw the Frozen Sing Along, followed by Beauty and the Beast then the Little Mermaid! Chloe was great during most of them. I tried to feed her during Frozen and she started screaming. Turns out, she just wanted to see the show and she wasn’t hungry yet! I did end up feeding her during the Little Mermaid which put her right to sleep. You know what that means…dinner for us! 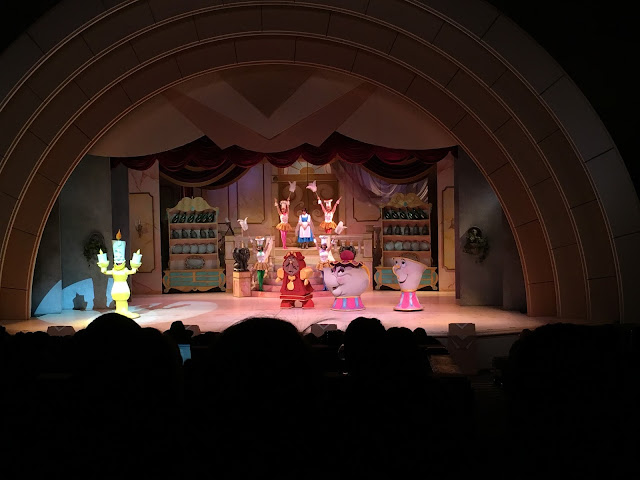 We were able to snag a table outside at The Brown Derby which is first come first serve and usually crazy crowded. Since I was there on an off season weekend, it was nice to have short waits for everything. We both had their cobb salad and a glass of holiday sangria! 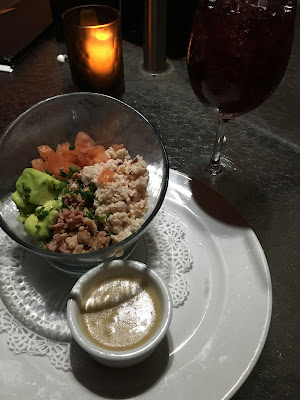 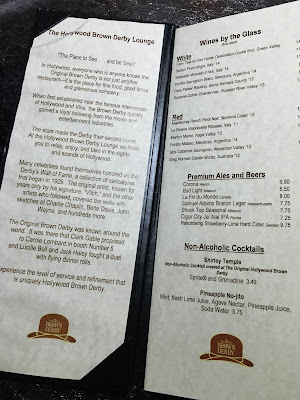 As soon as we were done eating, it was time for our fast pass to the Toy Story Mania game! It’s one of our favorites for sure. Chloe and I kind of crushed it! Then we had to go meet Buzz and Woody of course! 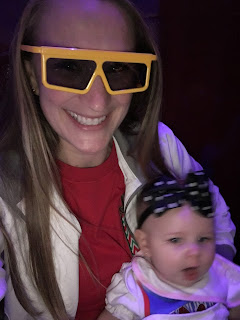 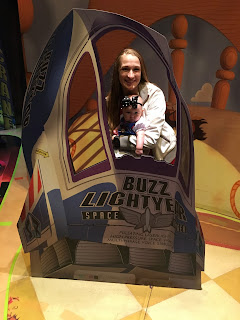 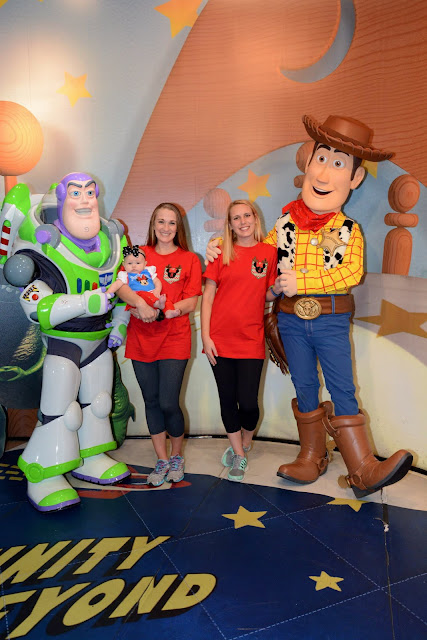 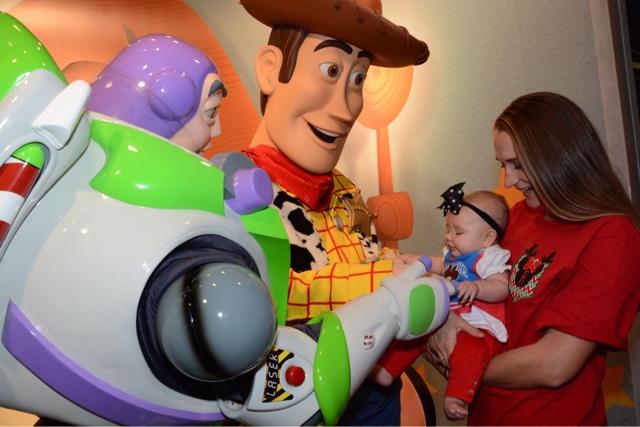 We ended the day visiting the Osborne Family Spectacle of Dancing Lights! This family originally started decorating their home in Arkansas with lights and each year it got bigger and bigger. Jennings Osborne, the father, ended up buying two adjacent properties to his to make the show even bigger. In 1995, Disney approached Osborne about setting up the lights at MGM {now Hollywood} Studios. This year is the last year they’ll be there! It was awesome actually get to see the lights before they move onto their new home. 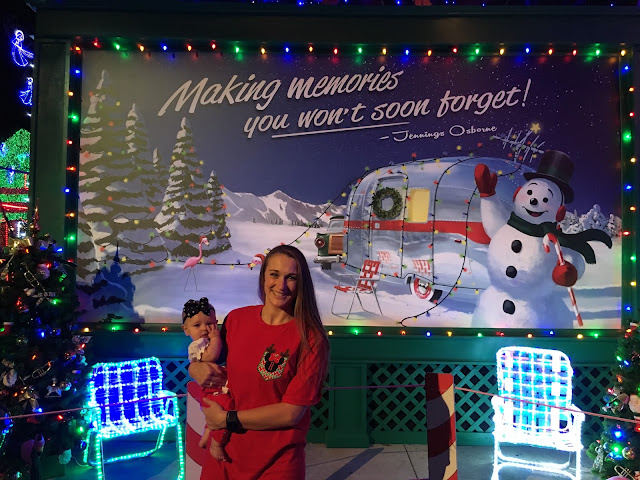 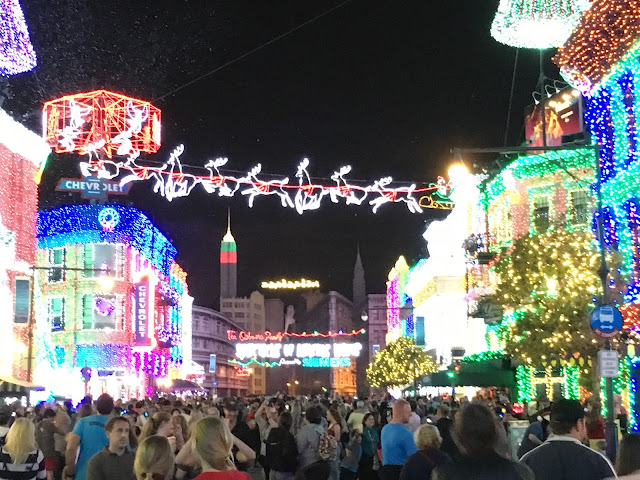 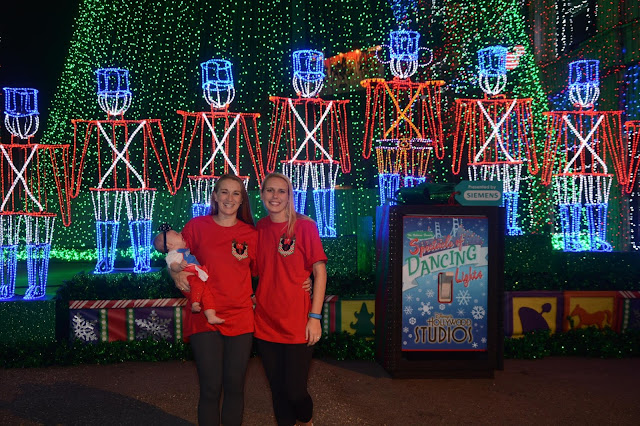 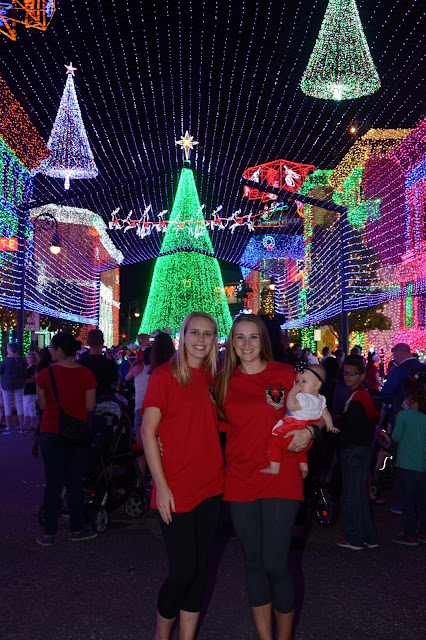 Chloe was mesmerized by the lights. It was amazing to see her so engaged. 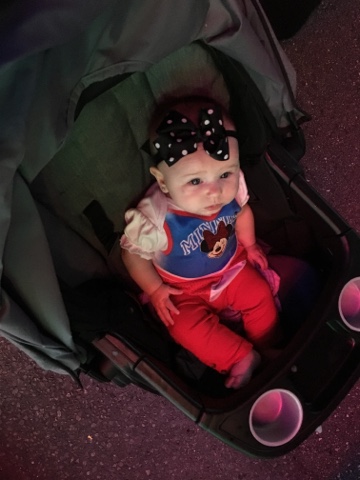 Sunday morning we got up, had breakfast and went to Animal Kingdom for a few hours! 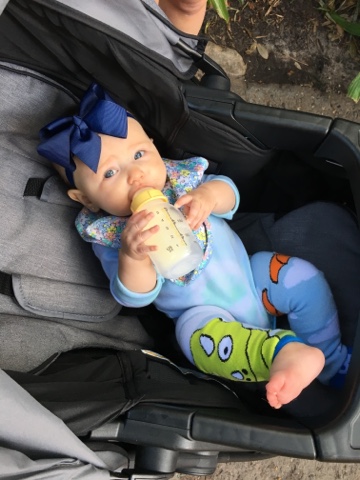 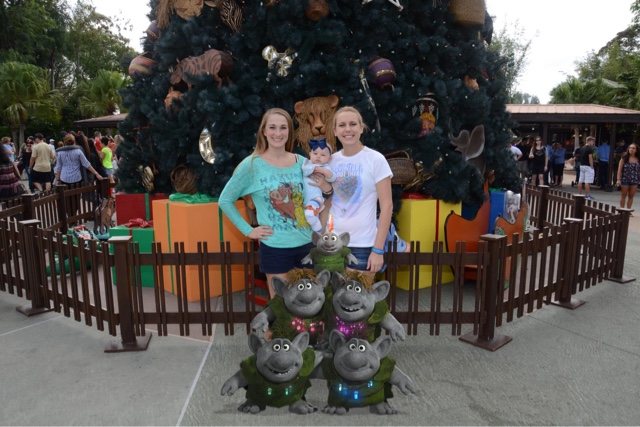 First we met Dug and Russell! Dug was waiting very patiently while Russell was saying hi to Chloe. Puppies just seem to love her…and she loves them too! I’m not sure she was given a chance to not like dogs with our crazy hooligans. 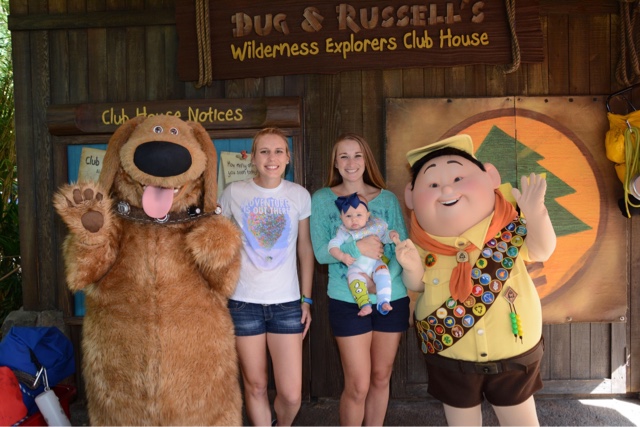 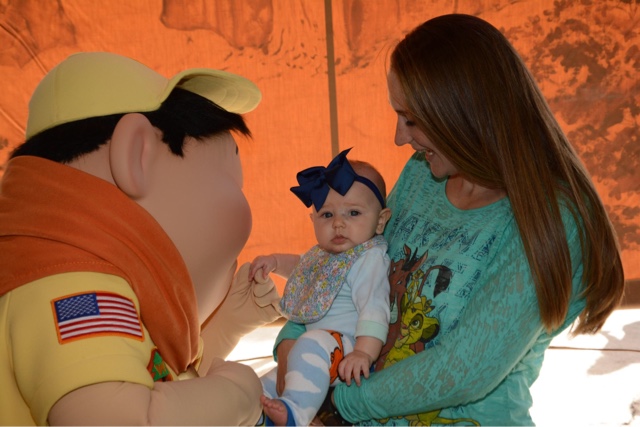 Then we went and found Pocahontas. Chloe LOVED her! She giggled and smiled the whole time which was the most magical experience. 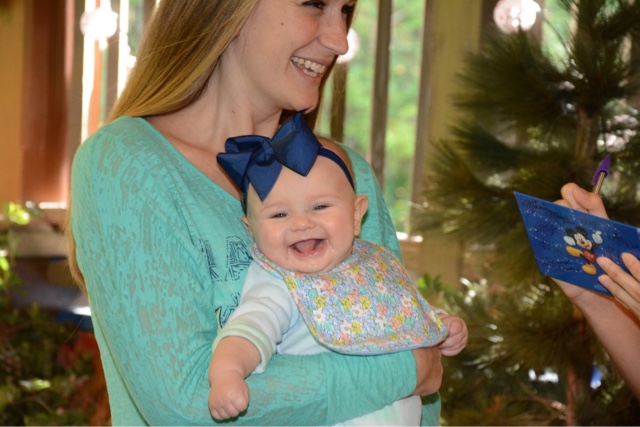 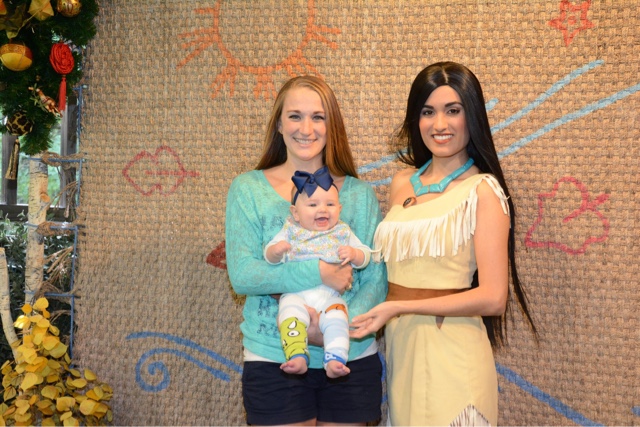 Next we rode on the African Safari and all the animals were out in full force. It was one of the best safari rides we’ve been on! Then we had to take a trip to the baby room to feed Chloe. She had a melt down while we were there which took a little longer to get her calmed down. We needed up taking our time to eat lunch and grab some Dole Whip instead of going to the Festival of the Lion King because Chloe wasn’t having it. She eventually fell asleep and we just walked around the park. I ended up jumping in the single rider line for Everest since I didn’t get to ride it last year! Then we headed to Dinoland where Chloe woke up, so we went on the triceratops ride which is kind of like Dumbo.
Then we had to wrap up our trip with a visit to Mickey and Minnie. We were so excited to see them dressed up in their Christmas gear! Chloe was done and crying when we saw them, but calmed down after they played with her for a minute. 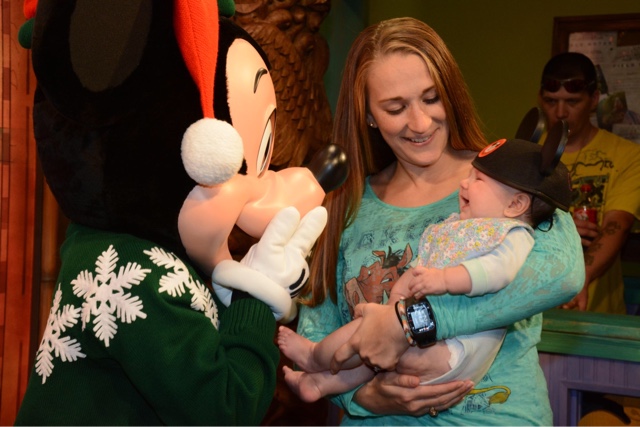 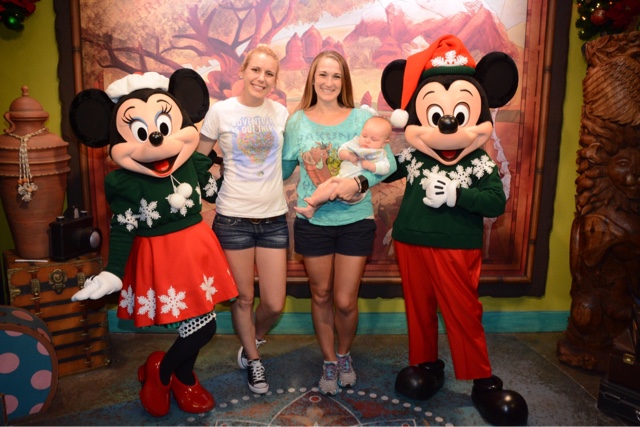 Overall, Chloe did a great job! She was pooped by the end of the trip and had a few melt downs by Sunday, but I was so proud of her. We had a lot of fun riding the smaller rides, watching the shows and meeting all the characters!
Next time we go to Disney, daddy will be coming with us and we’re going to run a half marathon! Well, not Chloe, but she’ll be there to support us!
Did you miss our day at Magic Kingdom, check it out!