0
Home Running Races Tough Mudder Houston: Team Olympus
This past weekend, I completed my very first Tough Mudder! It was the first race that I was nervous for in quite some time. Probably since my first marathon in January 2013. I think it was a fear of the unknown. I know that I’m a good runner. I can run a marathon. I wasn’t sure about the obstacles. So many thoughts running through my head…will I be strong enough? Will I have the upper body strength? Can I cross the monkey bars without falling into the pit of water? Will my feet hold up with all the mud? So on and so forth. 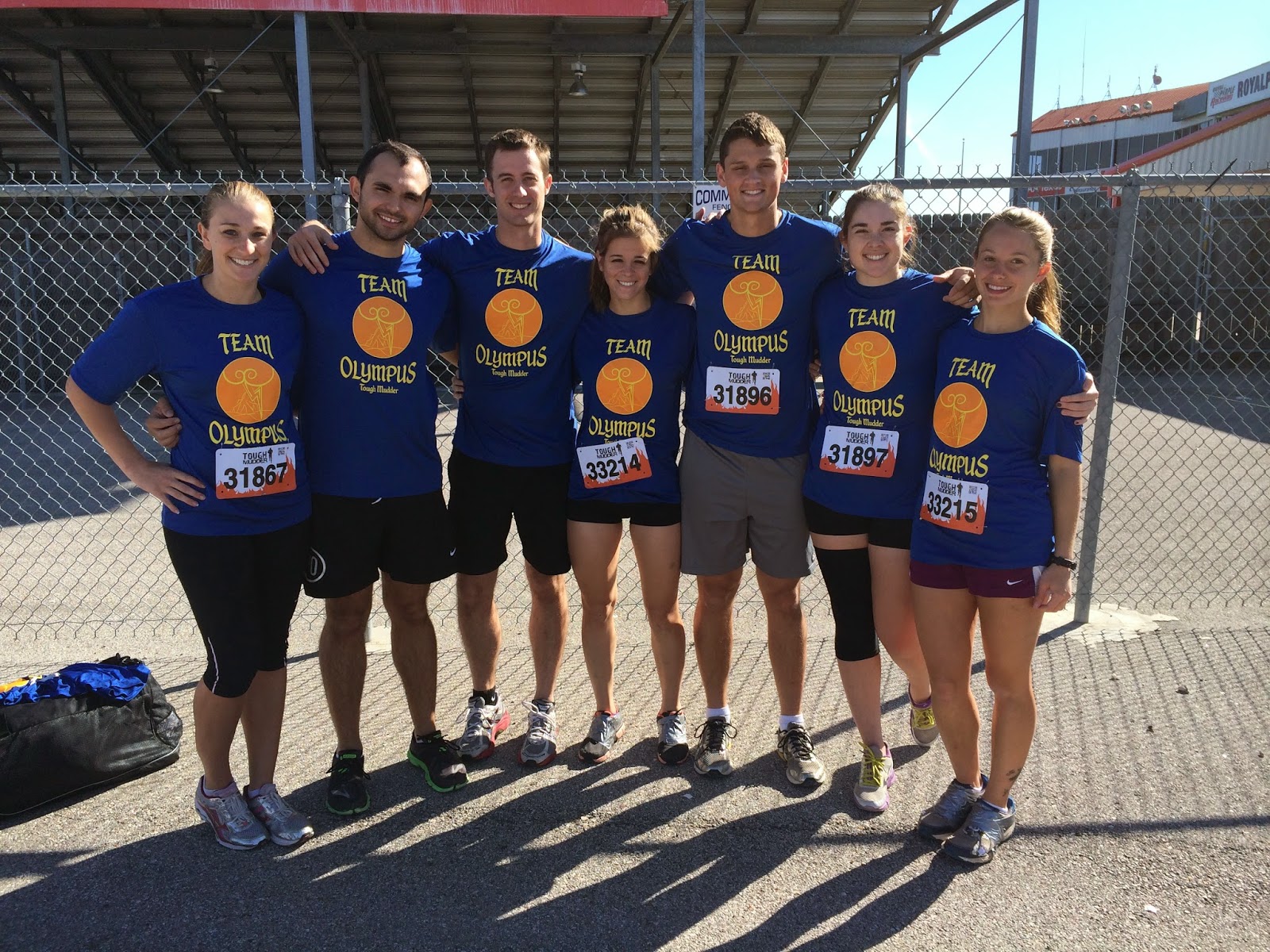 I’d like to start this recap off with the fact that I had the most awesome team. I went into the race knowing only Dominique, who is a fellow Aggie that I became friends with at the gym I work out! I’m so glad that he invited me to join his team because I made so many new friends this past Sunday. Everyone was so friendly and welcoming. We became insta-friends and they didn’t think that I was crazy.

The race was held in Baytown at the race track and was a quick drive from Houston in the morning. We arrived with plenty of time to get signed in, pin on our bibs and get amped up. The check in was very organized and I commend Tough Mudder for getting so many people through check in with ease.

Of course team pictures we also mandatory before the race! We were Team Olympus and each had a Greek God to represent. I was Aphrodite! 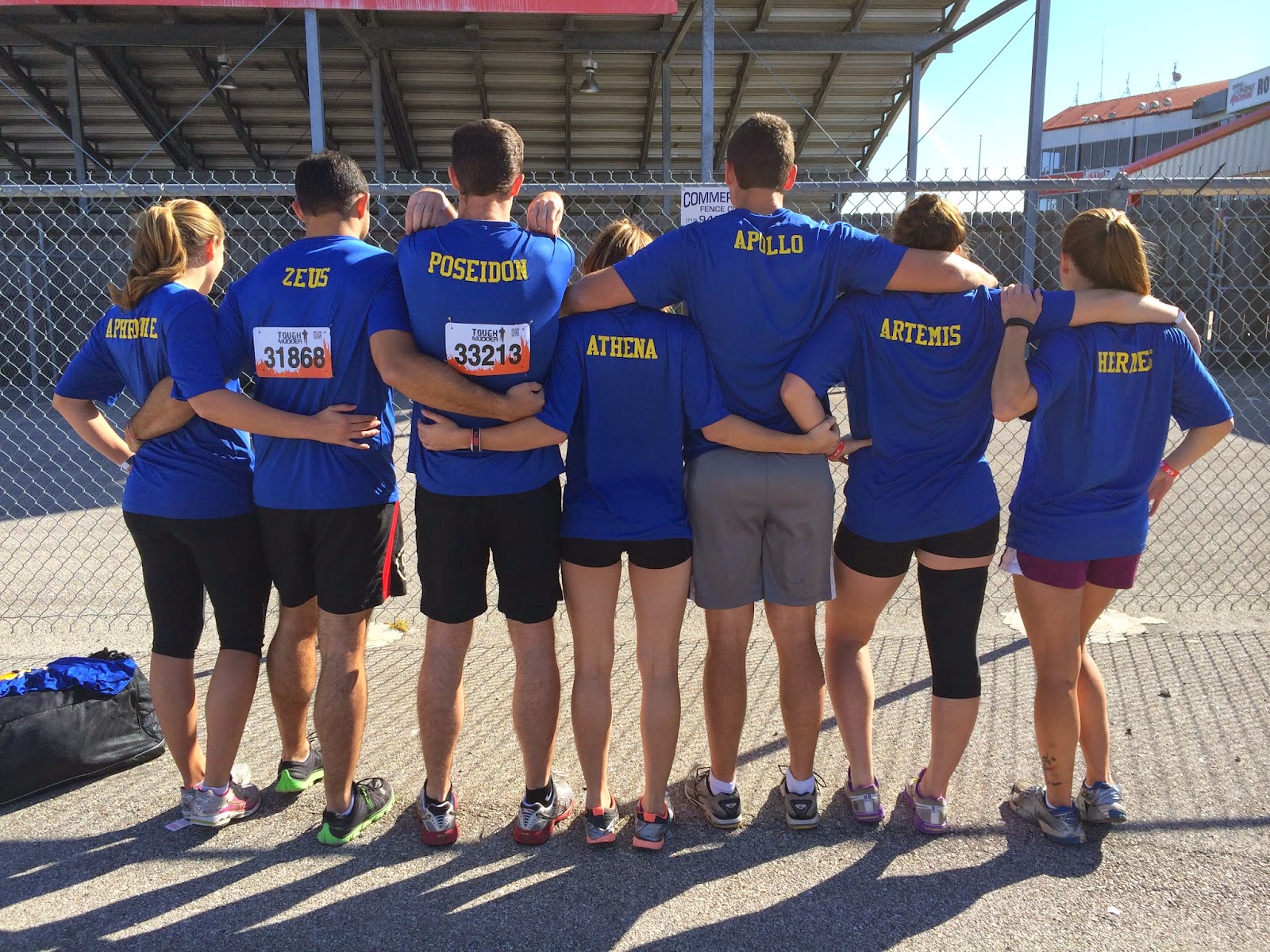 We got our bag checked (which cost $10 to check…that kind of sucked) and went straight to the warm up area to stretch before we took off. We were the last group of the weekend which was actually quite nice because the weather was perfect and it wasn’t crowded. We didn’t have any more groups behind us trying to push into the warm up zone. It was very relaxed and easy which is what I needed for my nerves. The race itself was awesome. It took a serious amount of physical and mentally strength. It was the mental strength that surprised me the most! I knew some obstacles would be challenging, but I was so scared to do them.

We conquered 21 obstacles in 10.5 miles in just under 3 hours! The hardest obstacles were (in no particular order) the Mud Miles, Monkey Bars, Everest, Arctic Enema and Shock Therapy. Of course that’s just my opinion. Since there were so many obstacles, I’ll just elaborate on these few a bit so you can get a feel of how awesome the course was!

But we did it! I know I’m missing descriptions of so many obstacles, but it would take forever to go through them all. I mean, I get so excited about each of them that I’ll go on forever. Let’s just put it this way, I…
…slipped and slided through so much mud.
…wiped out a time or five.
…was helped by many gentlemen and the most awesome strong female teammates.
…was thrown around like a rag doll.
…climbed a human staircase to get over 10 foot walls.
…laughed until I cried.
…cut up my fingers on hay bails.
…made it through small tunnels despite feeling claustrophobic.
…challenged myself beyond my limits.
…set a new standard of awesome.
…made so many new friends.
…smiled from ear to ear and so much more! 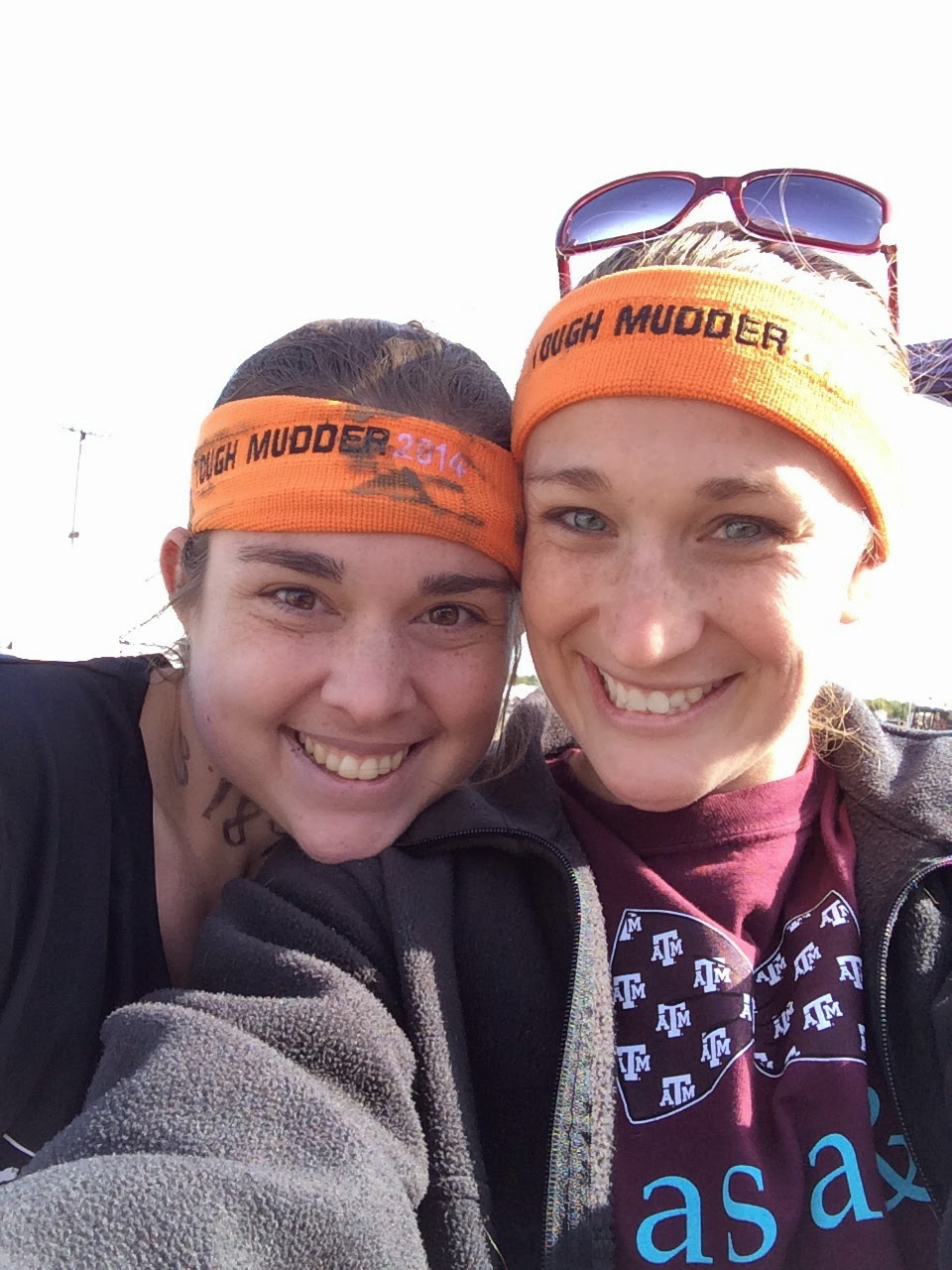 Can you tell I had fun? I can’t wait to see the pictures from the race! After getting cleaned up, we were able to get another team picture. We look pretty solid despite the challenging course we just overcame! 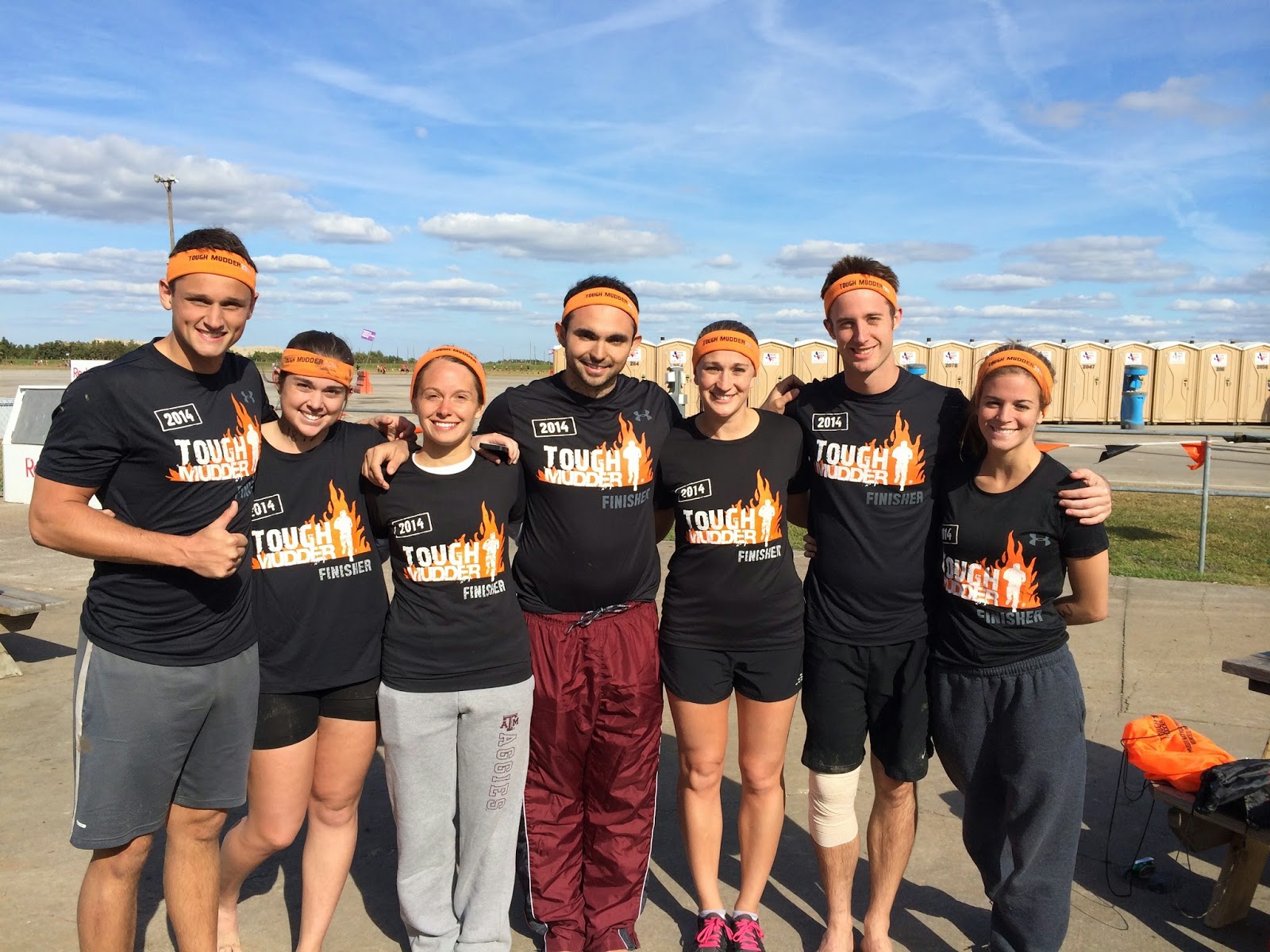 And after all that, most of us are crazy enough to want to do it again. But seriously…I’m doing another. And it’s going to be epic. I can’t wait to join the Tough Mudder Legionnaires! Watch out Central Texas 2015…Team Olympus is coming back stronger and ready to dominate! 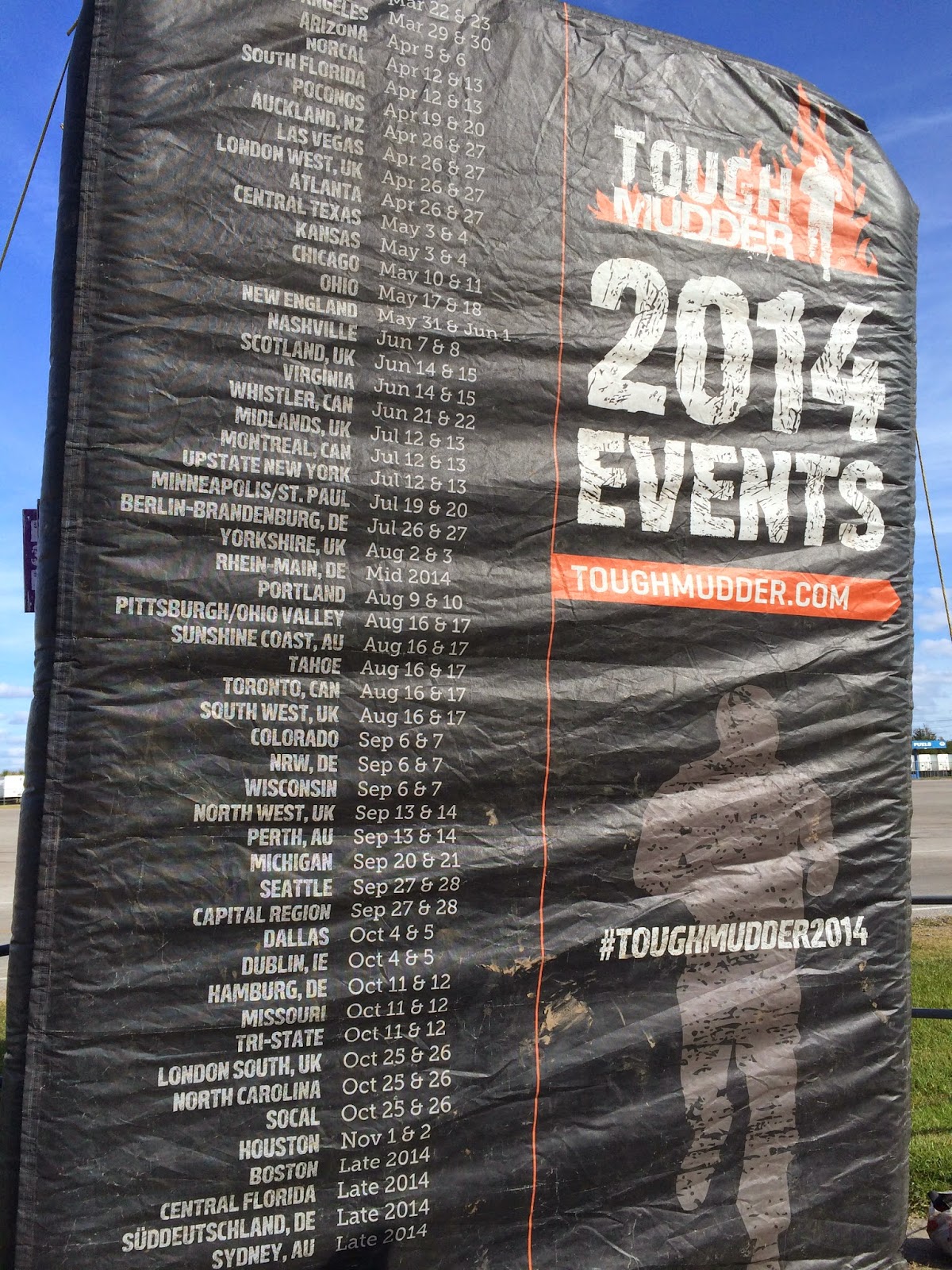 Oh and of course we had to wear our finisher headbands and shirts on #HeadbandMonday to celebrate and show off! CJ, Rick and I all finished strong this weekend! That being said, Health Club at Travis Place…come train with us because we’re awesome! And strong. And fun 🙂 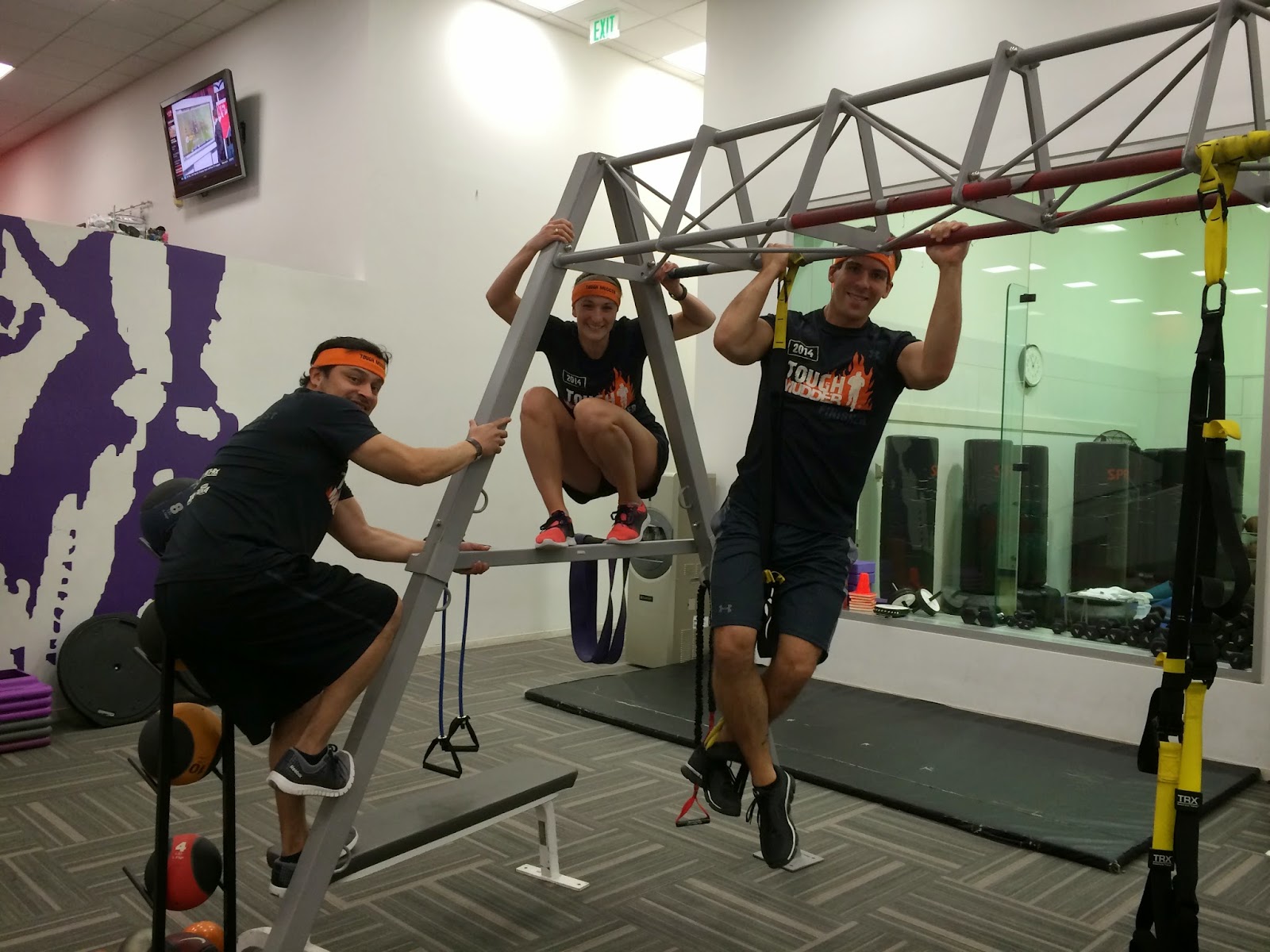 Would you ever do a Tough Mudder or other type of adventure race?
If you’ve done one, which one and how was it?!