We got to the airport and through security without a hitch. Great start. Then we got to our gate, played some slots and boarded our plane. Again, without a hitch. We actually were scheduled to take off a few minutes early. As we’re taxiing towards the runway, the plane stops then keeps going and stops again. Next thing you know, we’re told that an error light came on and we needed to go back to the gate to have a look at it.
We waited on our plane for an hour. It was really warm and just got warmer as we sat there. Eventually we were told the plane was too warm and everyone needed to deboard. At this point it’s a little after 2pm, and we’re told they’ll give us gradual updates on the status and that our flight is not cancelled. Updates came at 2:30, 3:00, 3:30 and by then we were hungry so we opted to grab some food before our flight since we wouldn’t be getting home until after 8:00pm Houston time. Of course at 4:20 we get the infamous announcement, “You flight has been cancelled. Please form a single file line behind the desk and we’ll rebook you for tomorrow.” Oh great, tomorrow, as in we won’t be getting home on time. 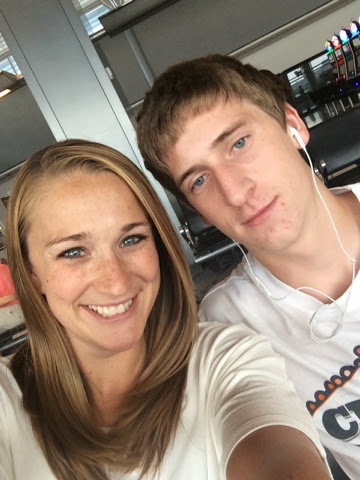 Trying to make the best out of a crappy situation.

I waited in line for an hour and a half to get my new flight, meal vouchers and a hotel. I was 7pm before we were able to head to the shuttles to get us to our hotel. Now don’t get me wrong, the hotel was nice enough, but after 8 hours at the airport, we were exhausted and the hotel was near NOTHING so we weren’t able to go anywhere or do anything our extra night.  There was a free shuttle that could take us to Mandalay Bay, but we ended up working out for about 45 minutes followed by an hour in the pool and hot tub. It was more relaxing and I’m hoping it will help me ease back in to the real world tomorrow. If only they’d told us sooner about our flight, we could have enjoyed this extra time in Vegas. 8 hours at the airport isn’t exactly my idea of fun. Standing in line for an hour and a half to have some rude woman working for United to be bitchy towards me isn’t my idea of fun. I understand that you’re working late, but at least you’re at work. I’m making no money today because I can’t be at work. I had to have two classes covered because I’m not there. It was definitely stressful, but I’m getting over it now.
Aside for on yesterday’s mishap, the trip has been great and hopefully I can tell y’all all about it tomorrow! Happy Monday loves. Hope yours are better than mine!
Xoxo,
Amy