So what do you think, is that enough M’s for you? It’s all about alliteration 🙂 Now I’ll be the first to admit that I am far from a big basketball fan. I’ll cheer for the Rockets since they’re in Houston. I love going to games, mostly because I am a sporting event kind of girl. Watching on tv? No thanks. I also cheer for my Aggies, but let’s be honest, they suck and haven’t been good since they went to the tourney in 2011. When it comes down to it, I don’t care much for basketball. BUTTTTTT…..when it comes to creating a bracket and cheering for my teams during March Madness, I care. Mostly I only care because I want to beat JP. I like being better than him. Especially since I pick my teams based on mascots I like or states I’ve lived in.

That being said, I thought it would be fun to create a workout inspired by March Madness. Or more specifically, the bracket itself. Take a look, give it a try and let me know what you think! 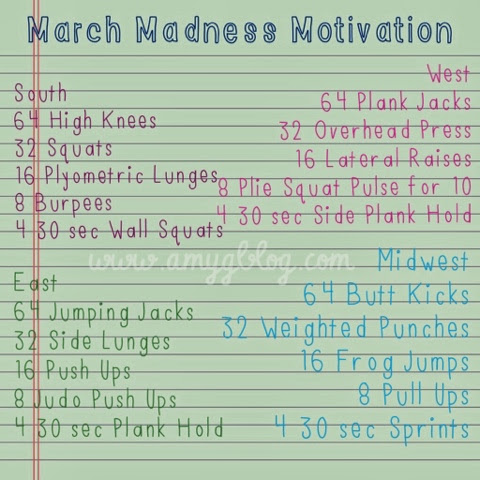 Feel free to do all or just one of the regions from the around of 64 down to the Final 4. Here’s what you’ll need for each set:

Now jump in and give it a go!

Do y’all enjoy watching basketball?
What about March Madness? Any bracket-era out here?
I’ve got Arizona winning the whole thing! Crossing my fingers that it actually happens 🙂

This website uses cookies to improve your experience while you navigate through the website. Out of these, the cookies that are categorized as necessary are stored on your browser as they are essential for the working of basic functionalities of the website. We also use third-party cookies that help us analyze and understand how you use this website. These cookies will be stored in your browser only with your consent. You also have the option to opt-out of these cookies. But opting out of some of these cookies may affect your browsing experience.
Necessary Always Enabled
Necessary cookies are absolutely essential for the website to function properly. These cookies ensure basic functionalities and security features of the website, anonymously.
Functional
Functional cookies help to perform certain functionalities like sharing the content of the website on social media platforms, collect feedbacks, and other third-party features.
Performance
Performance cookies are used to understand and analyze the key performance indexes of the website which helps in delivering a better user experience for the visitors.
Analytics
Analytical cookies are used to understand how visitors interact with the website. These cookies help provide information on metrics the number of visitors, bounce rate, traffic source, etc.
Advertisement
Advertisement cookies are used to provide visitors with relevant ads and marketing campaigns. These cookies track visitors across websites and collect information to provide customized ads.
Others
Other uncategorized cookies are those that are being analyzed and have not been classified into a category as yet.
SAVE & ACCEPT
1 shares