Another weekends bites the dust and another Monday has quickly snuck up on us! This weekend was definitely a good one that’s to Houston Restaurant Weeks! HRW is a dining event that donates money to the Houston Food Bank. Various upscale restaurants offer specific menus at a reduced rate and for each meal purchased, part of the proceeds go directly to the Houston Food Bank. It’s awesome.

Friday night we decided to try out Mr. Peeples which is a brand new restaurant in Midtown just about 2 miles {if that} away from our house! We made it a double date night with Michael and Chandra which made it way more fun.

Of course I had to take lots of pictures since we were dressed up all pretty! After torturing the boys with pictures, we were off in the pouring rain {that came out of NOWHERE} headed to Mr. Peeples. The restaurant was so nice and very swanky. It had a great atmosphere: not too loud, not too dark. I hate when I can barely see my food when eating 🙂 Speaking of eating, we did a lot of that. The food was delish, but I felt like my main dish was a bit saltier than I would prefer.

On Saturday, I woke up bright and early for a 9 mile run! 4 miles solo followed by 5 miles with Runner’s High Club! I was pumped for our first group run together for the year. I was struggling with humidity towards the end, but pulled through in 1:20:30.

You know what the best thing about training season is? Pedicures! I have to keep my feet somewhat in one piece, so pedis are a must. So Charlotte and I went to the salon for mani/pedis while JP was with the boys.

Saturday night, I was able to attend a blogger event with JP at Eleven XI! It was amazing. I met so many new bloggers and found an awesome new restaurant right around the corner from my house. It is literally a block away. Eleven XI invited our group of bloggers and offered us our first cocktail free along with some delicious appetizers. Come back later today for a full review of the restaurant, its atmosphere and cuisine!

Sunday morning was nice and lazy. Well, Amy kind of lazy. On sleep in with no alarm Sunday, I woke up at 7:10 and there was no chance of me going to sleep. I laid in bed until about 7:30 playing on my phone before I cracked. After a cup of coffee and playing with the pups, I was already restless. So let the cleaning begin. Exciting I know, but my house looks great now 🙂 The rest of Sunday consisted of lounging, reading, teaching step and cooking class! Yup, more food. {I told y’all it was a foodie weekend!} 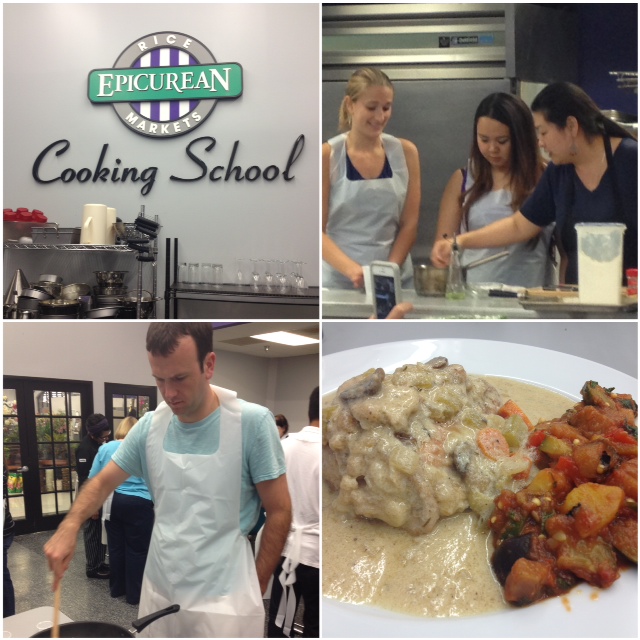 Rice Epicurean Market also participates in Houston Restaurant Weeks by offering their cooking classes for a reduced rate! We had a blast and I really want to do it again! We went to the Oh La La French cooking class. Here’s what was on the menu:

The class lasted from 6:00pm – 8:30pm. We were paired up with another couple and did a bit of group cooking. Everything was already measured out for us and we didn’t even have to clean up. Score! I really enjoyed learning about how to make macaroons. They’re far from easy, but I’ll probably have to at least try to make them just once. I’ll let y’all know how it goes.

It was a really great experience and I know that JP and I definitely plan on doing it again! We were given the recipes, so hopefully I’ll whip them up at home sometime and I’ll share with y’all!

Overall, it was an awesome weekend. Busy, but not overwhelming and we were actually at home. That won’t happen again until mid-October. Let the craziness begin!

Have you ever tried out a cooking class? What did y’all make?!
Does your city have something similar to Houston Restaurants Week?