So last Monday I received an e-mail from the Rhythm and Blues half marathon saying I should sign up. I was planning on running 11-12 miles over the weekend so I told the hubs and he said go for it. Why not? I was going to run anyway and it’s way more fun with other people around. Plus I was going to get a shirt, food and some new bling. Sounds like a win all around to me! I didn’t really think about the fact that it was a 3 loop course and we were due for thunderstorms all weekend…

It didn’t turn out quite so bad though. Here are my thoughts on my 3rd race of the year and my 1st half marathon of 2013… 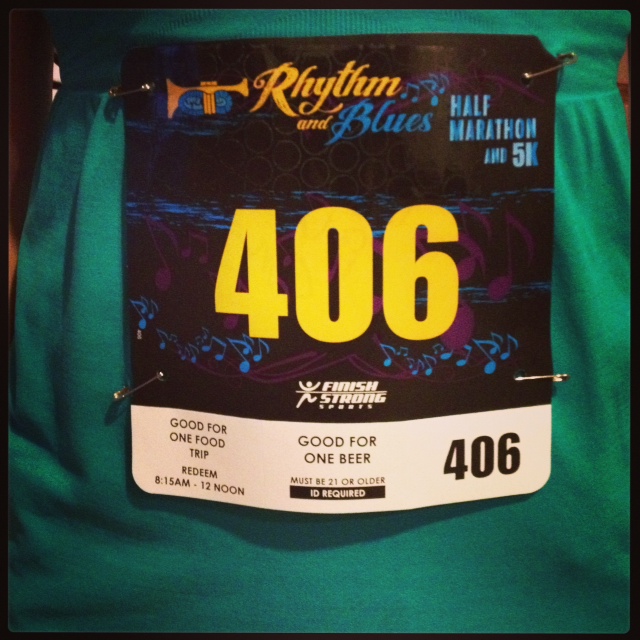 The race recommended we get to the start by7:00am. This seemed completely silly to me since the race didn’t start until 8:30am. Luckily I ignored the rules and showed up about 15ish minutes late. The race was a 5K and half marathon. The weirdest bit to me was that the 5K started at 8:00am, 30 minutes before the half. I personally think it should have been the other way around. 8:30 is a late race start time and I was not diggin’ it.

Despite the late start, we did end up pretty lucky because the rain decided to hold off. There were a few drizzles here and there the first 30 minutes or so, but I found them to be nice due to the humidity. Speaking of humidity, OHHHH the humidity! It was over 90% humidity. Not quite as bad as my worst race ever 30K but came in a close second. That paired with 70+ degree temperatures didn’t mix too well for this asthmatic girl. I decided not to let it get the best of me.

Now time to break this race down, loop by loop…

Best part about a loop course? My number 1 fan, biggest supporter and best spectator ever got to see me 6 times and even ran with me for a bit to boost my confidence.

Loop 1
First loop was great. Unfortunately, a cool breeze, slight drizzle and initial downhill start caused me to start too fast. Like way too fast. I should have known better, but did I slow down? Not until mile 3. I’m a dummy. So clearly I felt great through the first loop. I ran the first half of the first loop with my friend Jet from Runner’s High! My usual running buddy Scott was planning on running way faster than me, so I let him go on his merry way 🙂 Now let’s talk about the actual loops.

Worst part about these loops? Going underneath the overpasses on Allen Parkway. Who knew you could have a hilly course in Houston? 2 underpasses 2 times per loop (3 loops)  = 12 hills. Not huge hills, but hills none the less. I dominated them in that first loop! Clearly I’m still looking pretty pleased with myself when I saw the hubs for the 2nd time!

Loop 2
I found a solid pace around 8:45-8:50/mile. That’s where I should have been the whole time but I digress. The start of the second loop was fine until the sun started to come out. What? Not expected. It heated up quickly and the air thickened immediately. My lungs were not happy. I powered through and kept on truckin’. It was a bit harder to get up the dreaded “hills” but still manageable without taking any walking breaks.

Loop 3
I was not pleased. The sun went back into hiding and a nice breeze kicked in. Breezes are fantastic except when you’re going uphill, into the wind, with tired lungs and legs. As you can see when I passed the hubs I was over running. I don’t do well in this type of humidity, but I also don’t quit. I took walking breaks at the water stations and after the hills. When I saw the hubs on the second half of the loop I knew I had just over a mile left. JP ran with me to the 12 mile marker and the greatest thing happened. The front moved in! The temps dropped several degrees with a breeze coming from behind in seconds. Just what I needed to push me through the last mile without stopping.

Finish Line
The finish line. My favorite view of every race. I saw it. I crossed it. I did it in 1:57:02. Not too shabby if I do say so myself. I was hoping for about a 2 hour half and even did a little better despite the weather. I forgot to stop my watch when I crossed the finish line because I had to pee so bad. TMI? Don’t care. It started around mile 10 and by mile 12 I only wanted to finish so I could use the restroom. Whatever motivates you right? I crossed, grabbed my medal and continued running to the potty. Someone yelled “you know you can stop right?” I would have come up with a witty remark if I hadn’t been so focused 🙂 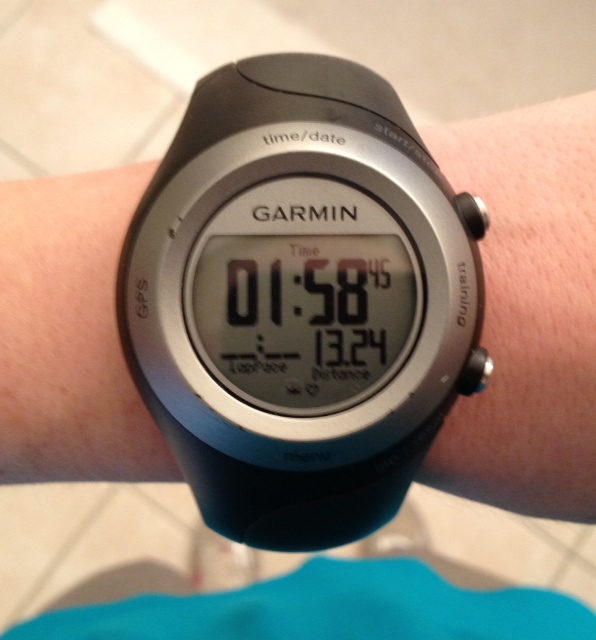 Here are my pros and cons. 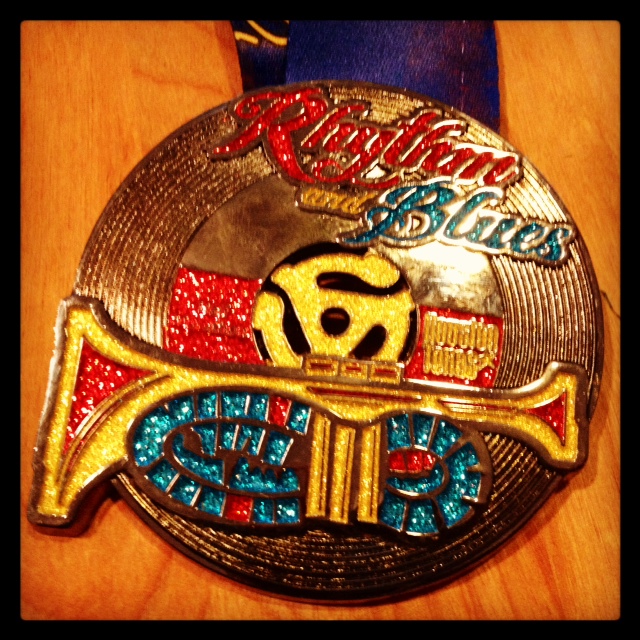 Would I do it again? Not sure. I would if they changed up the course a bit. I’ve only run 2 loop courses and neither have turned out particularly stellar. Even though the weather was less than desirable, I had a good time and raced another race. I love to run and I love to race. I can’t complain too much about getting to do what I love. 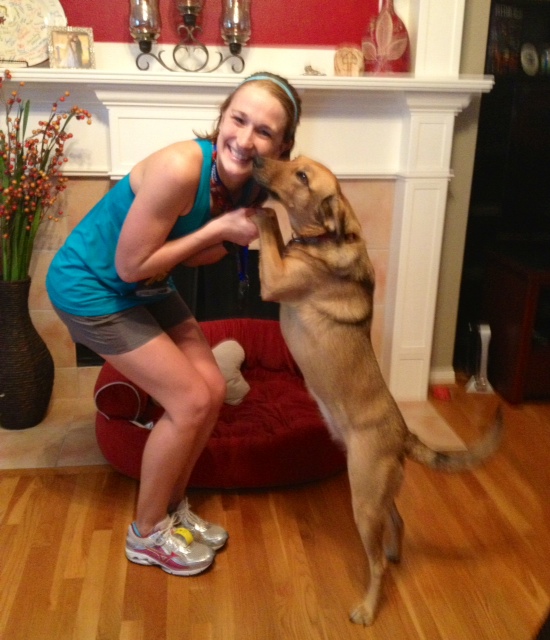 Have you completed any races recently?
How do you feel about running/biking/working out in the humidity or rain?