Y’all have no idea how amazing it feels to write that simple statement. Four simple words. Seven syllables. All of which hold true. The best part {or worst part, depends on how you look at it} is that I’m hooked. Greatest feeling of my first twenty five years of life was crossing that finish line. But before I get to the finish line, let’s take a look at the 4:01:51 it took me to get there!

{Warning: This is a wordy post. I want to look back and remember how I felt through the race!}

On Sunday, January 13, 2013 I woke up at 4:45a.m. My alarm clock went off at 5:05. Don’t you hate when that happens? It did give me a few minutes to take in the morning before the nerves really kicked in. My clothes were laid out ready for me to go. I had everything I could possibly need from gloves to a hat, energy chomps to a light weight jacket, my inhaler to my iFitness belt. I was set.

The hubs and I took off to pick up my friend Melanie and head to George R. Brown Convention Center! It was real life! We met up with my running group, Runner’s High Club for our group picture and some motivational chats!

Around 6:30 we made our way outside to our corral only for the Heavens to open up and rain down on us. Lovely. It was in the mid-40’s and raining and windy. Thus it really felt like it was in the low to mid 30’s. Don’t get me wrong, I’d rather run in the cold than the heat any day. No lies. Remember the treacherous 30K I wrote about? Worst. Run. Ever. So I couldn’t complain too much about the conditions. Far from ideal, but it could have been worse.

The gun went off at 7:00am and about 7 minutes later we were off! I was so blessed to be able to run with two great friends that I made through Runner’s High: Scott and Melanie. I don’t think I would have finished as quickly as I did without them. We started off slow trying to get around other runners and found our happy starting pace. We eventually settled at about a 9:10-9:15 pace for the first 4-5 miles. At mile 8 we saw my family and then Melanie’s! My fan club was able to snap a few pictures for us 🙂 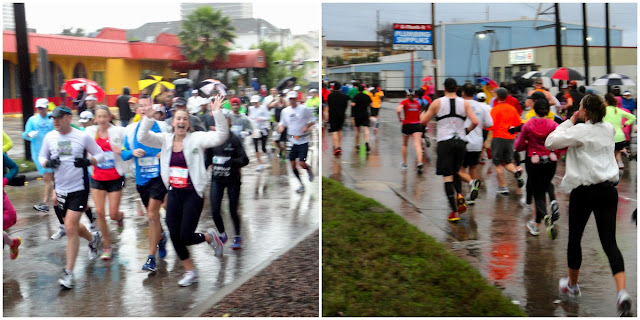 On the right you can see me flailing my arms like a crazy person, and to the left you can barely see Scott in the blue and Melanie in the pink! At mile 9, the half marathoners made a U-turn while the crazies continued on for the full marathon. As were approaching the U-turn, I said, “I feel like JP should be passing us soon.” Low and behold, about 15 seconds later, Melanie spotted his pink head band and I was able to cheer him on and blow a kiss. It was the weirdest feeling because he honestly could have been anywhere, but I just felt it. Creepy? Awesome? I don’t know what, but it’s kind of neat.

Speaking of the hubs, he rocked the half marathon. It was his second and he PRed! He finished in 1:53:24. How awesome is that? 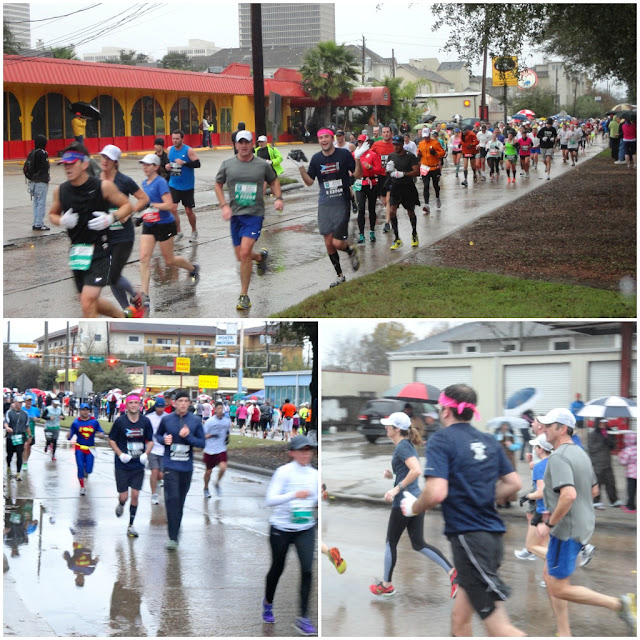 Our fan club got to see him twice from the same spot since the half marathoners U-turned. They got some pretty good pics of him! My handsome man 🙂

As we continued, my friends and the awesome crowd kept me distracted through mile 16 where my girl Chandra was waiting for us with lots of cheers, love and an awesome sign. It’s amazing how seeing your friends and family keeps you going! Scott, Melanie and I stayed together through about mile 19/20. At that point, I had found a comfortable pace that was a bit slower, so I told them to continue on. Around mile 21 is when I started power walking through the water stations so I didn’t get water up my nose 🙂 Apparently I get sloppy when my legs get tired! The last few miles were up and down Allen Parkway. Anyone who lives in Houston and has been on this road knows it goes underneath the crossing streets which makes for some wicked hills! At mile 24, there was a ridiculous Allen Parkway hill that I knew I was not going to walk up. No way. Not me. Best part? My family was waiting for me at the top of the hill!!! Actually my sister was waiting at the bottom to run up the hill with me, but somehow we missed each other! Such a bummer, but it’s the thought that counts. Seeing my dad and Phil at the top were enough to keep me going strong! 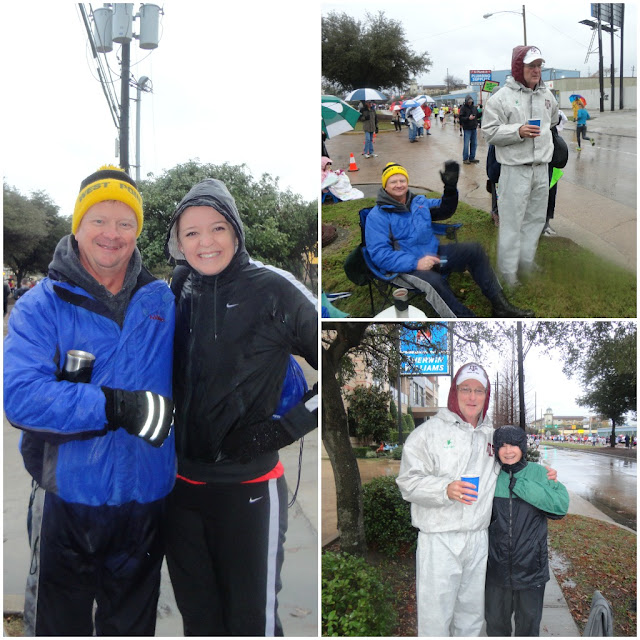 Ummm…how about my awesome spectators {Dad, Emily, Jody & Phil} cheering us on in the freezing cold, windy rain?! If that isn’t love, I don’t know what is. I don’t think this experience would have been nearly as gratifying without y’all. I hope y’all know how much it meant for you to be out there rooting for me.

Okay so I’m up the hill at mile 24 with only 2.2 miles to go. At mile 25, I met my wall. My feet were dragging and if I didn’t walk for just a bit, I may have tripped and fell. When I was building up the energy to start running again, God sent me an angel. A random guy cheering people on started yelling, “Go Amy. Pick it up, you’re almost there!” Then he started trotting along beside me to keep me going. How awesome is that? It was exactly what I needed to continue on strong. Houston spectators really are the best.

At mile 26 we hang a left and run along side George R. Brown Convention Center with the finish line in our view. Y’all, I swear I was sprinting to the end. But if you watch my video {click the link and type 1110 in the search!}, I am barely jogging! Oh well, I finished and I was so very proud. I reached my number one goal, to cross the finish line feeling good. Even though the weather was crummy, I reached my other goal too! My time goal! I wanted to finish in around 4 hours and my official time is 4:01:51. I really did it. We all did it! 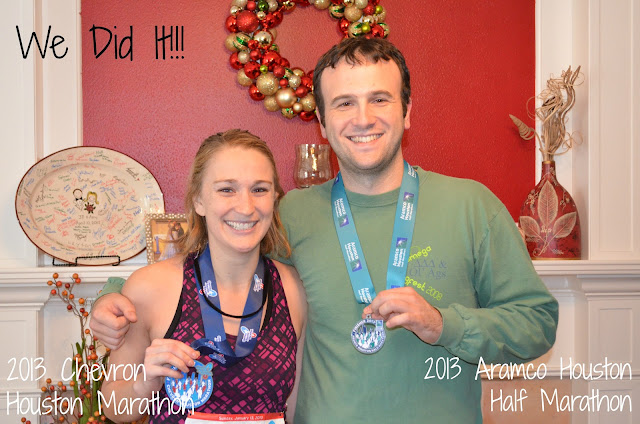 My friends and the hubs were waiting for me just inside the convention center where we hugged…a lot. We were all very emotional. Then we saw our pace group coach which was made us feel even better since we could brag about our finishes! After we grabbed food, it was time to head back home to see our fan club! Let’s just say that walking to the car was the hardest thing ever. My hips were already starting to ache and putting one foot in front of the other took concentration. Again, it was all worth it.

We got home and it was picture time!!! 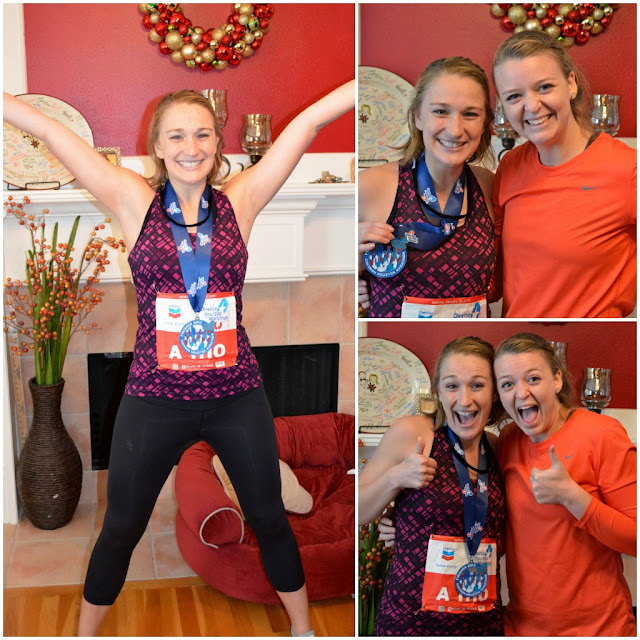 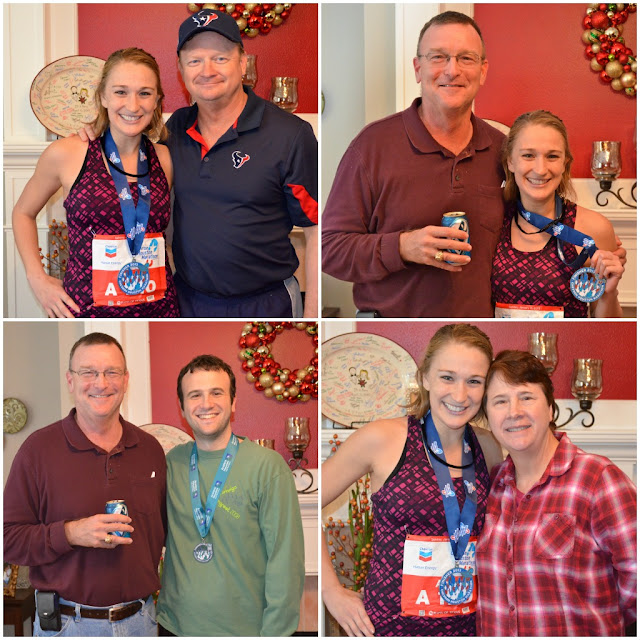 We have the best family and support system ever. A while back I wrote about the importance of support systems with regards to fitness and reaching goals. I wouldn’t be where I am today without my family and friends keeping me motivated and going strong. THANK YOU for helping to keep me the best version of me. I love you all so much. 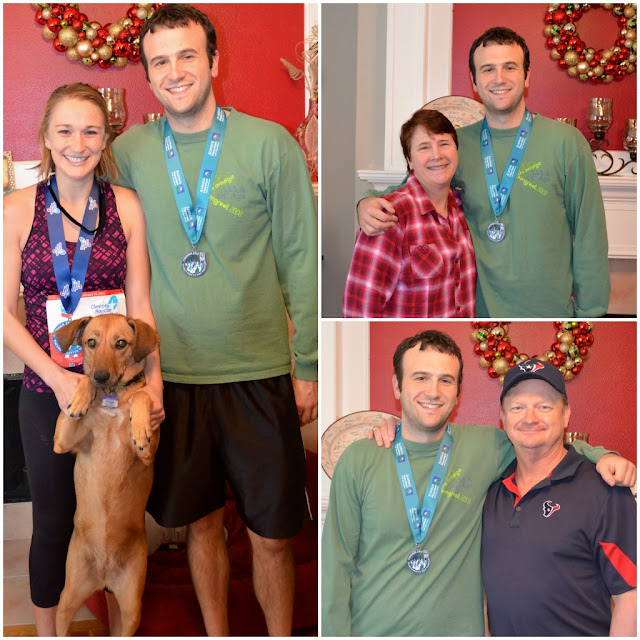 One more shout out to my amazing coaches from Runner’s High: Grady, Vicky and Tim{when Vicky had to miss!} I don’t think I would have accomplished my goals without your support, motivation, tips and tricks! Also to all of my awesome running buddies in the 3:45 pace group! We all rocked it! 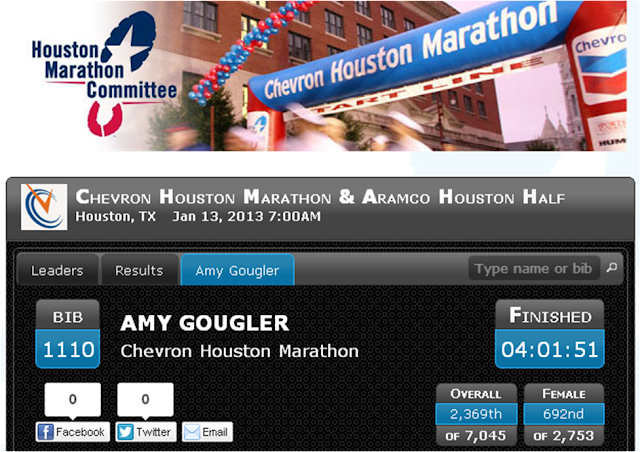