Today is Tuesday, December 11th and it is currently 38 degrees outside in Houston, TX. Hallelujah!!! It really is winter; Santa’s really coming in 2 weeks! Of course, I do live in Texas where there are two seasons, summer and winter. They usually occur in the same week. That being said, let’s rewind two days. The day is Sunday, December 9th. It’s 5:30am and 68 degrees with 100% humidity. That’s right, I’m not lying. 100% humidity. This is not uncommon in Houston, especially during the summer. In December, it’s at least less common. Unfortunately, it had to be the day I was running my very first 30K race. I have run this distance before, I’ve even run longer {longest run to date is 19.5 miles}. This was my furthest race ever. By 5.6 miles.

The morning started out seemingly harmless. I was rockin’ a sleeveless running top and running capris in Sugar Land Town Square at 5:30am, so of course I had a few goosebumps! 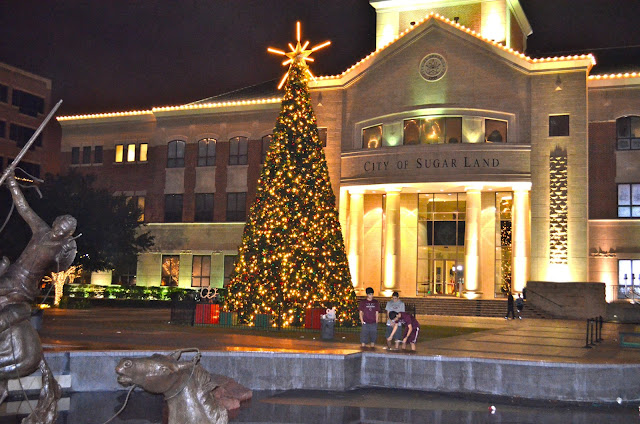 There were gorgeous Christmas decorations out, but it definitely did not feel like Christmas was in the air. Instead I felt tension. Why you ask? Because it was too warm and too humid for this poor asthmatic runner. The race started promptly at 6:30am. It was a not so balmy 68 degrees; however, I didn’t really notice the temps at this point.

I started off feeling strong, warming up at about a 9:00/mile pace. I loved that I was running around an area that I was familiar with but never actually ran around. It was old and new all at the same time! Around mile 3.5 I saw the hubs! I knew I would see him several more times because it was a 3 loop course. He was parked right by one of the water stations, so he had some pretty solid entertainment. 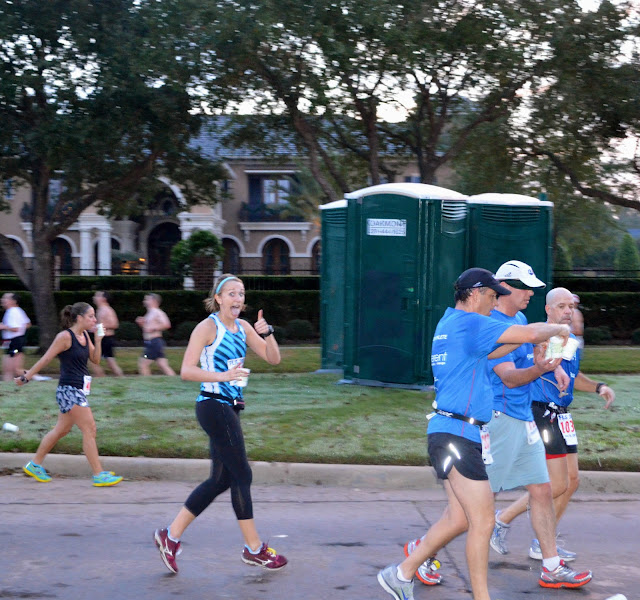 As you can see, I’m doing great at this point! I mean, I should be, I’m only 5K into my 30K 🙂 Around mile 5, I saw my Runner’s High friend Britt pass me by and a bit later Scott caught up to me. Scott and I ran together for about 2 miles, but he was totally on point that morning, so I told him to carry on and I’d see him at the finish! When I was near the 7 mile marker, the first place finisher lapped me. That’s right, I got lapped. Granted, he finished in 1:45…that’s 5 minutes faster than my half marathon PR! So the speedy Kenyan was at about mile 12 when I was at 7. Ouch. Of course, JP had to snag a picture of him! 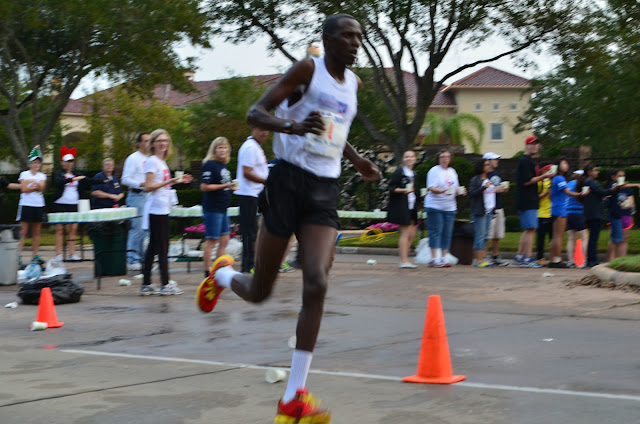 Eventually I finished my first loop and saw the hubs again plus my sister was there this time! As you can see, I’m still doing just fine at mile 8. I crossed the half way mark {9.3 miles} doing about an 8:48 pace. 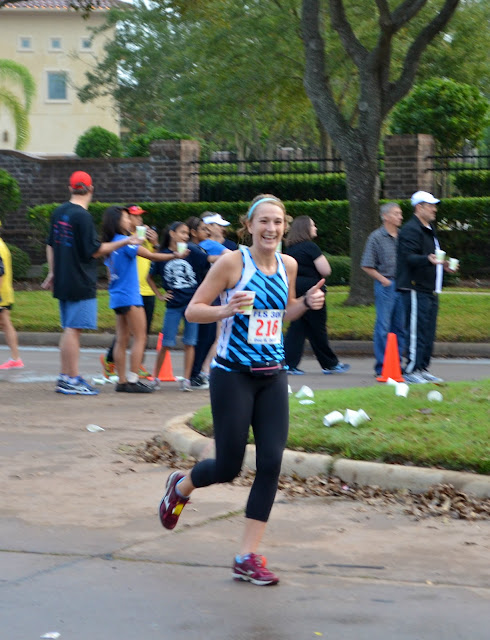 The next time I passed by, I was in dire need of a potty break. Luckily there were port-o-pots. Not the best option, but better than the bushes! I was also in need of my inhaler…as you can see, JP caught a picture of me from behind while I was taking a puff. Here’s where the humidity and heat really started to get to me. I was still about to push through after taking my inhaler at mile 12, but I had to start taking just a few walking breaks. 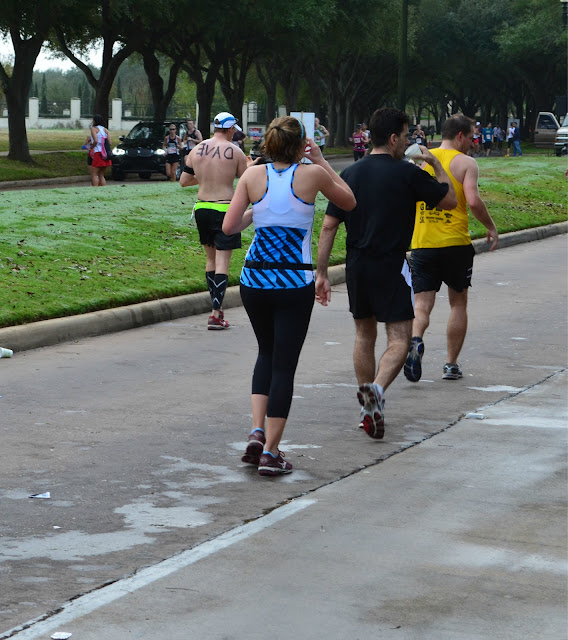 At mile 14, I hit a mental and physical wall. This was a pretty serious wall, y’all. I’m talking 3 stories tall, about 5 feet thick and made of solid brick. I couldn’t suck in enough air, so I wasn’t getting enough oxygen to my muscles. In cooler, less humid air, I can run and run and run. I still may need my inhaler, but I don’t feel like I’ll never get enough air again. This is how I felt on Sunday. It was miserable. I walked. A lot. Then I would run until I couldn’t. It sucked. Bad. Luckily, I made it back to Emily and JP at mile 16.5 and JP walked with me to the end of the street. 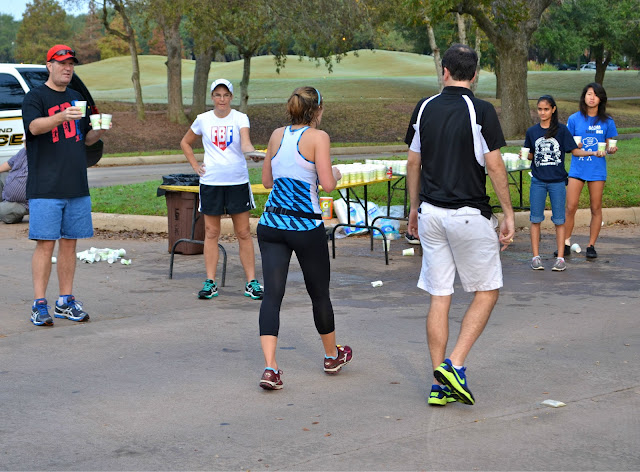 I’m not sure if you can tell in this picture, but I’m hurting. I managed to run some then walk some through to the finish. I wish I could have run more, but my body was telling me NO!!! So I listened. Eventually, I made it across the finish line. I still managed to finish in just under 3 hours. Not sure how I did it, but I think it involved a lot of hard-headed-ness and even more spirit. I love running. It is my passion. I wasn’t going to quit no matter what. Even if I had to crawl across that darn finish line!

Despite the rough weather conditions and how miserable I felt, I glad that I did the race. Not every day can be your best. There are days that we suffer through it all. There are days that we conquer our PRs and feel on top of the world. I run for both of these days. We can’t reach our best days without having our worst. Sunday was probably my worst. Looking back, I’m thankful for it.

It taught me that…
…listening to my body is number 1
…I’m not always going to feel fantastic
…finishing when you’re at your worst actually feels better than when at your best. Mostly because I wanted nothing more than to be done.
…having spectators that love you can really keep you going when you want to quit
…every race is a learning experience.

I finished and I’m proud. I did nothing but soak in epsom salts and sit on my bum the rest of the day. My body was killing me, but I finished.

Despite my miserable end to the race, at least Emily and JP seemed to be having a blast! 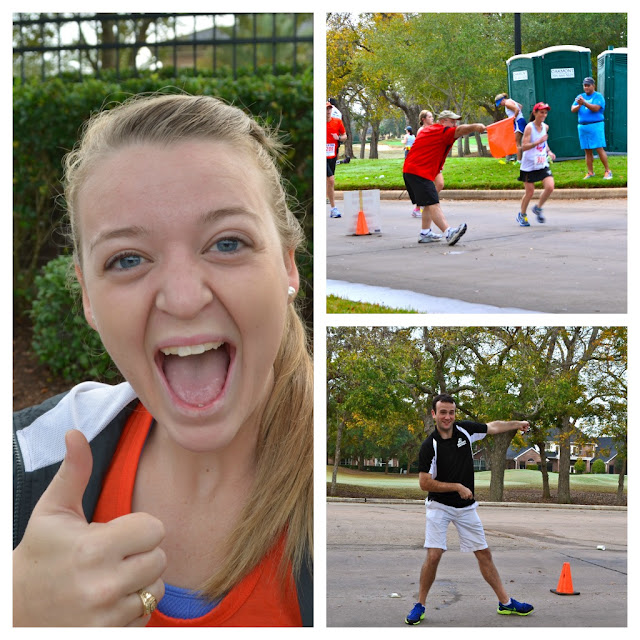 I didn’t get any pictures of me after the race. No cameras allowed. Hopefully the camera men were able to get a good one of me crossing the finish line. I think I need that one. Again, I’m so proud that I finished when all I wanted to do was sit down.

Run any races recently? How do y’all get through your worst runs ever?