4 years ago the hubs drove my happy butt to San Antonio to run my first half marathon ever with two of the greatest friends a girl could ask for, Julie and Andrea. 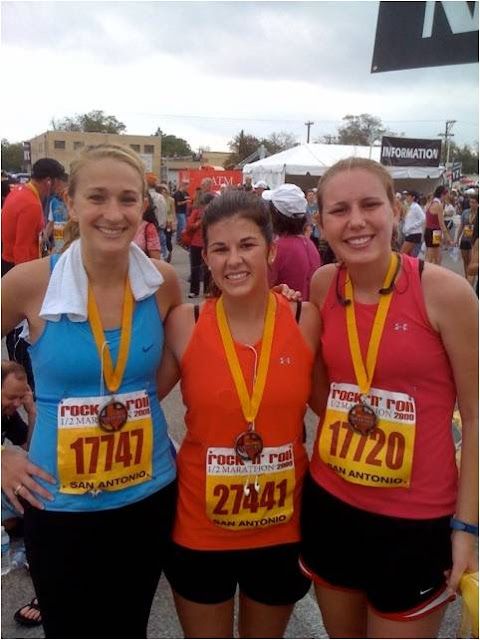 A few months prior, I had decided that I wanted to run a half marathon. Why not? I was athletic and could run 3-4 miles with no problem, so I had my mind set to run my first in November 2009. Little did I know I was going to become completely hooked. My first half marathon left me with a total high and sense of accomplishment. Similar to winning a cheerleading competition {which is all I really knew up until then}, you work so hard for months, train your body to do things it doesn’t want to do, and in the end, it all pays off.

It was another year before I ran my second half which again was in San Antonio with Andrea and Julie, but this time, Julie’s husband joined us for his first…and probably last 🙂 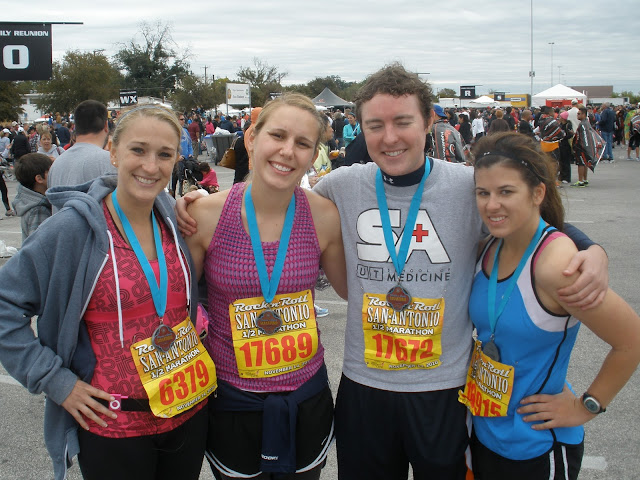 I think it was running a second time and seeing my improvements that really got me motivated to run more…and more…and more. I thought I was hooked in 2009, but 2010 really reeled me in. I ended up running 4 more half marathons before conquering San Antonio for a 3rd time making it my 5th half marathon in 2011! I’ll admit, I’m a bit of a nut case 🙂 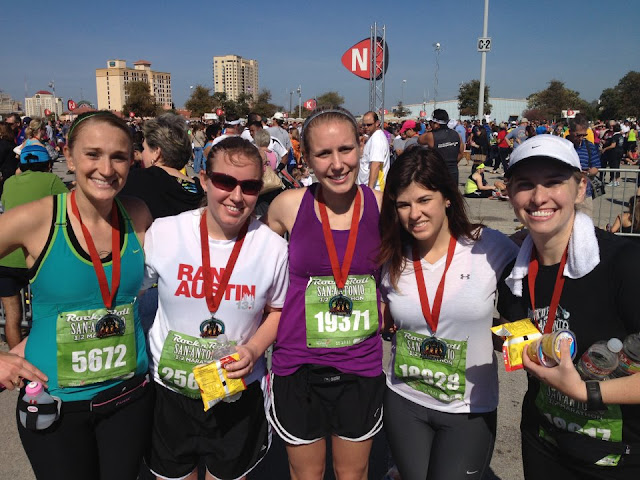 The 2011 race was a special one for me. Since I was living in Pittsburgh and so far away from my friends, this was the perfect opportunity for all of us to get together. Julie’s sister, brother and sister-in-law {Anna, Jake(not pictured), Danielle} ran as well! The more the merrier!

Running has become so much more to me over the past 3+ years. It started out as a single goal that I wanted to accomplish. Then it became a way for me to stay fit after cheerleading, gymnastics and tumbling were no longer a part of my life. Then it became a passion. A fire burning in my blood, yearning for improvement and willing to go the next step. After I finished the Aramco Houston Half in January of this year, I knew that I wanted more. I knew I wouldn’t settle until I had taken the big step, the giant leap. I had the word marathon on my mind and I couldn’t erase it. So here I am now, sometimes questioning my sanity, but still moving on and persevering.

Running means a lot to me. I like it. I don’t always like it. It takes time, patience and energy that I don’t always have. However, I always feel accomplished afterwards. That’s important to me. Some of you ask me “how did I learn to like to run.” It’s not something learned. It’s a feeling. Figure out why you want to run. There’s got to be more than one reason. You need to find a way to put your heart in it. Running doesn’t come easy to all and you don’t get good at it over night. It takes practice and devotion. I’ve learned that even more while training for the full. Some days it takes sacrifice and some days it’s all you want to do. So dig down deep and figure out what makes you run. Remember why and maybe you’ll fall in love like me 🙂

Take a look at my Races tab for some of my other running posts! So here’s to half marathon number 10! I can’t wait to see my Julie to celebrate our 4th RnR SA and her birthday! Happy Thursday y’all!