I don’t know what happened! I thought I posted this yesterday, clearly that was not the case. Craziness has struck since returning from Orlando and I haven’t had time to prep and schedule my posts. I’ll get back on top of things soon. Today is my final installment of my Orlando/Disney Trip recap. I hope I haven’t bored anyone with all of this, but it’s so fun to relive the memories. Plus, it may be helpful when you plan your next trip to Orlando!

On Monday morning {WOO HOO no work!}, our sweet friend Sky came and picked us up from our resort to take us to Universal Studios!!! My sister’s boss gave her 2 FREE tickets to Universal and we gladly accepted. Instead of having free tickets for Em and I, we gave Andrea and Julie $40 so we all go half price tickets…not too shabby!

We started out our day over in the Comic Book area! The Hulk was our first coaster to ride and there was NO LINE. Going to places like this in the off season is definitely a good idea. It probably helped that it was a Monday as well. The Hulk ride was awesome and had there been a wait, it would have been worth it. There wasn’t much else for us to actually ride in this area because the other main attraction was a guaranteed soaker which we didn’t want to do.

Wet & Soggy + Airplane = Gross & Smelly
Instead we took some pictures and headed over to Jurassic Park!!!

Jurassic Park was awesome. You feel like you’re actually in the park that the movie is based around. We had fun on the actual Jurassic Park Ride even though it’s a “water ride”. It’s similar to Splash Mountain in that you really don’t get too wet. As you can see above, I was well prepared with my jacket zipped all the way up just in case!

After the ride, we went to see the Jurassic Park Visitors Center which mimics the one in the movie! Julie was watching the rapor eggs when one of the hatched and she got to name it! She’s kind of a big deal 🙂

Side note: Raptors are my favorite dinosaur. I love them. I don’t know why, but I do. I think they would love me too. Just saying.

Next up was pretty much where I’ve been waiting all my life to visit. I kid you not. I’ve been waiting for my acceptance letter to Hogwarts since I read the first book. I clearly haven’t received it, so this was a close second.

I was like a kind in a candy store. 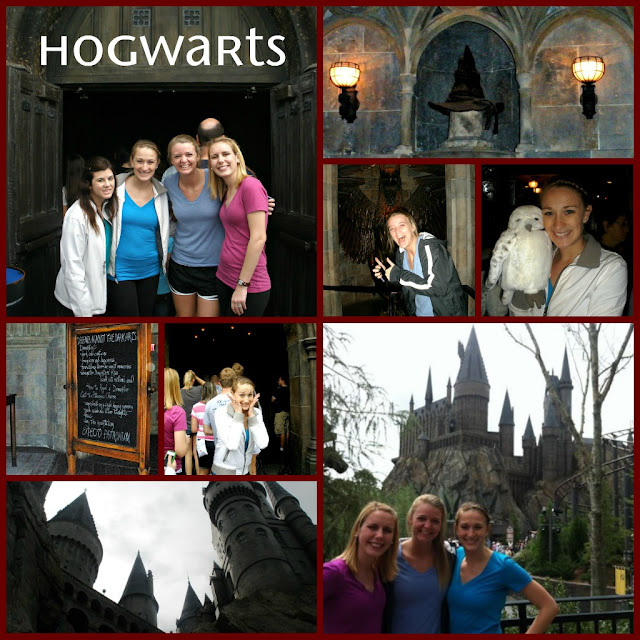 First off was to head to Hogwarts! This is the ride inside of the Hogwarts Castle. This ride cost a billion dollars to build. Let me tell you, I believe it. It’s absolutely amazing. Phenomenal. Outstanding. I want to do it again and again. For starters, there was only about a 30 minute wait, which is pretty much unheard of, while we were there. You also get to walk through Hogwarts while you’re in line. Who knew that waiting in line could be so much fun. There were some points when I actually wanted it to slow down just a bit! The ride itself is so unique and worth the wait 10 times over especially for a Harry Potter freak fan! 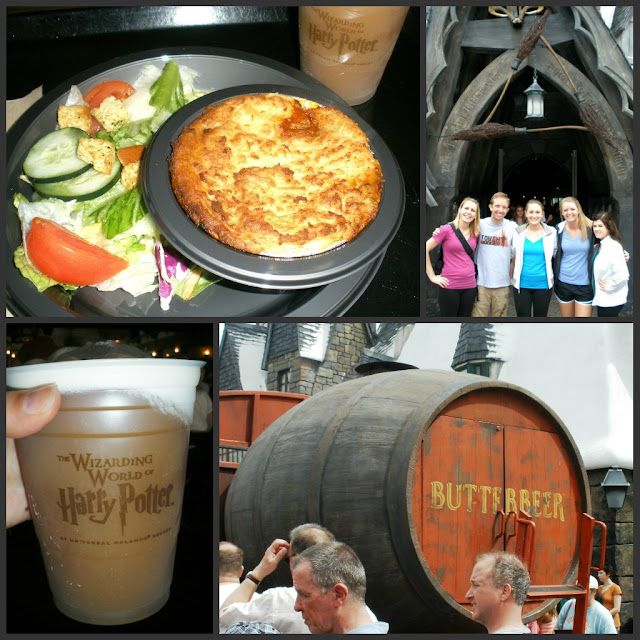 After the ride, we walked around Hogsmeade and had lunch at The Three Broomsticks! I had a Shepard’s Pie and of course, a Butterbeer. Em and I shared a frozen Butterbeer and it was so tasty…and more than likely a calorie bomb…hence the sharing 🙂 After lunch we walked around town and stopped at Olivander’s Wand Shop, Zonko’s Joke Shop and Honeydukes! I brought the hubs back a box of Bertie Bott’s Every Flavor Beans! 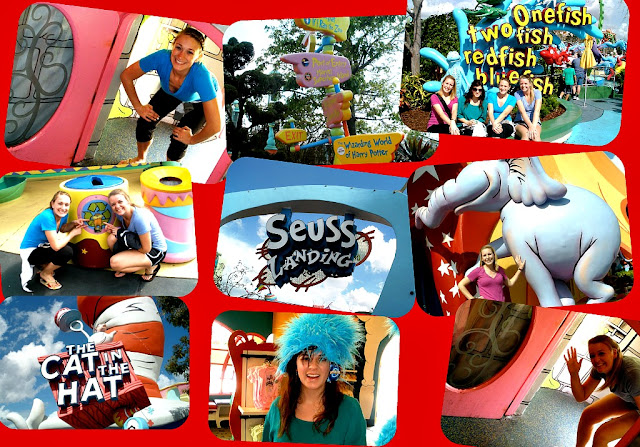 Next we wandered over into Dr. Seuss Land! It was very whimsical and a joy to walk around. Obviously this area is primarily for little kids, but we enjoyed walking around the stores, escaping from the sun and reading a few of our favorite Dr. Seuss tales!

Unfortunately, around 3:00pm, our day had to come to an end. Since there were no lines and few people to get in our way, the 5 1/2 hours we spent there was well worth the half price tickets we paid! Then we were off to the airport. Sky was such a sweetheart and dropped us off and everything instead of having us take the bus from Disney.

It’s safe to say we had an amazing trip. I couldn’t have spent it with anyone better! Let me know if you have any questions about an upcoming Orlando trip! I’ve got most of it down I must say 🙂