Thank goodness it’s Friday! Seriously though. I know I had a short work week, but man, catching up is not easy. I’m definitely ready for the work day to end so I can spend the weekend playing with my girl Kristin! WOO HOO!!!

Now let’s back track a little bit and continue of with all of my super fun adventures at Disney World. In case you’re behind, you can catch up here with Day 1 and the race recap!

Day 2 Post Race
After our awesome race, it’s safe to say we were a little pooped and completely starving. I mean, it was 9:00am and we had already been up for over 6 hours and ran 13.1 miles (and walked about 3 before that!). It’s safe to say I would call that a productive morning. After getting our medals, finding each other at our meeting spot, eating a post race banana, having a mini photo shoot and riding the bus back to our resort, we finally made it to breakfast. I scarfed down some chocolate chip pancakes that satisfied my post race hunger! With full and happy tummies, we headed back to the room to rest our legs and shower before heading to Magic Kingdom! We make it to the park by 1:00pm…not too bad all things considered.

The park was near empty it seemed. It was a gloomy, overcast day during Disney’s off season, so there were small to zero lines for pretty much everything! 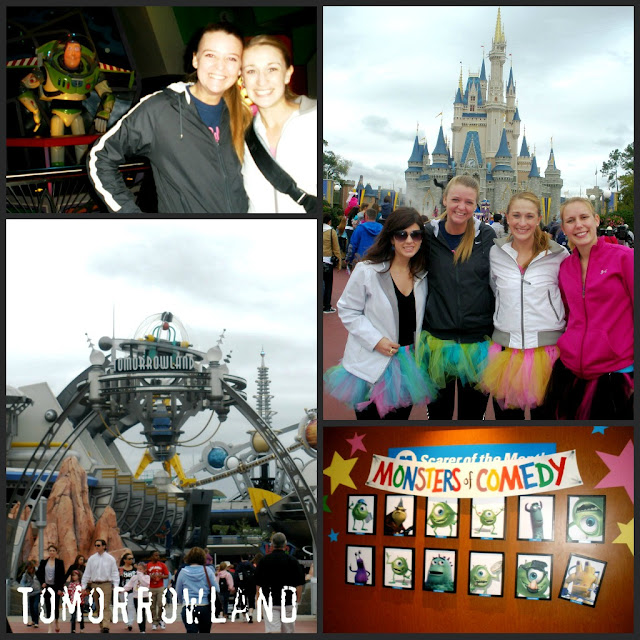 Once we arrived, our first mission was to get a picture of the 4 of us in out tutus in front of Cinderella’s Castle! Mission Accomplished. Them we were off to Tomorrowland! We were sure to hit all the favorites from the Monsters Inc. Laugh Floor to Buzz Lightyear to Space Mountain. {We even ended up riding some of them twice!} 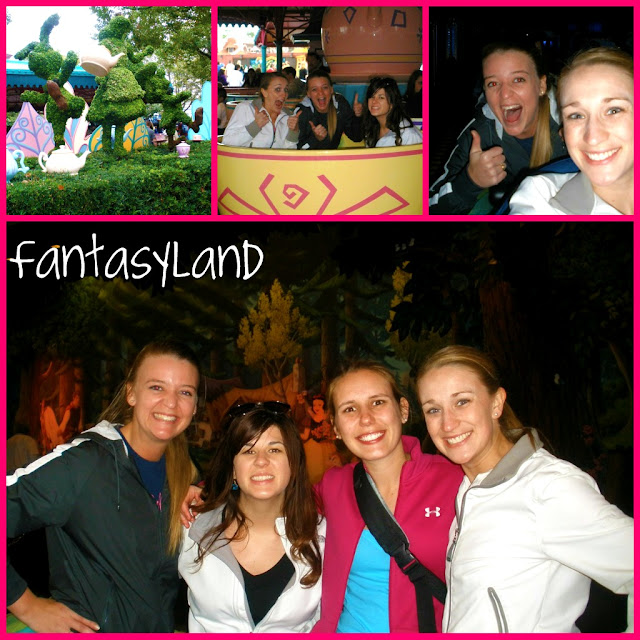 Tomorrowland seamlessly turned into Fantasyland where we promptly rode the Teacups…duh. Julie snapped some neat action shots for us, since her tummy can’t quite handle the spinning. She made a great photographer though! 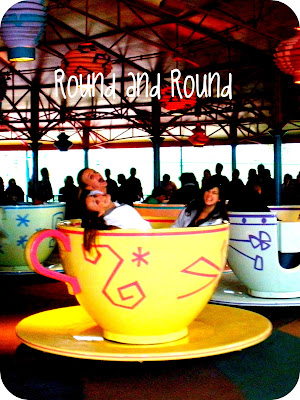 We also made sure to hit up the Snow White ride! I feel like that ride would be pretty scary for a little kid. My favorite part about Fantasyland is that they are currently in the process of building Belle and Ariel’s castles! Belle’s is going to be the Be Our Guest restaurant and Ariel’s a ride I believe. The sad thing about this is that we could not ride Dumbo. Total Bummer. Oh well, there is always next year!

Last stop in Fantasyland was It’s a Small World. One of those rides you just have to do even though it’s slightly creepy and you know you’re going to have the song stuck in your head the rest of the day. Yes, it happened. 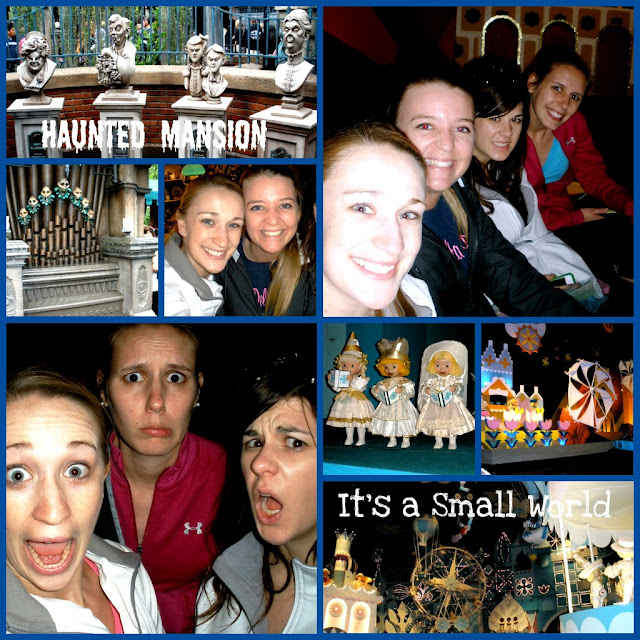 Next up was a quick stop in Frontierland to ride Splash Mountain. Since it was a gloomy day, there was absolutely no line. Fantastic. We flew through and I managed to forget that I own a camera…boo. The ride was fun though!

We then wound our way back to Liberty Square where the main attraction is pretty much The Haunted Mansion. It’s definitely a fun little ride and there are a few haunts and some AWESOME 3D projections. We were impressed. Side note: if you go on this ride don’t skip walking through the Grave Yard! It’s super fun 🙂 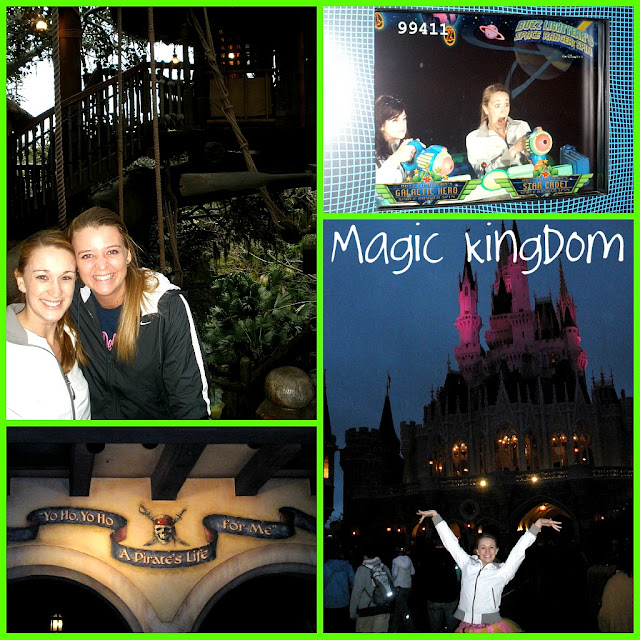 We then ventured on around to Adventureland where we took a walk through the Swiss Family Robinson tree house, went on the Jungle Cruise {kind of cheesy, but it was Walt Disney’s favorite ride!} and of course Pirates of the Caribbean! ‘Yo ho yo ho! A pirate’s life for me!’

We still had some time before the Lights and Fireworks shows, so we decided to ride Buzz Lightyear and Space Mountain again and we also hit up the Stitch interactive tour.

Finally it was time for the FIREWORKS! We had a great viewing spot and we were all mesmerized. 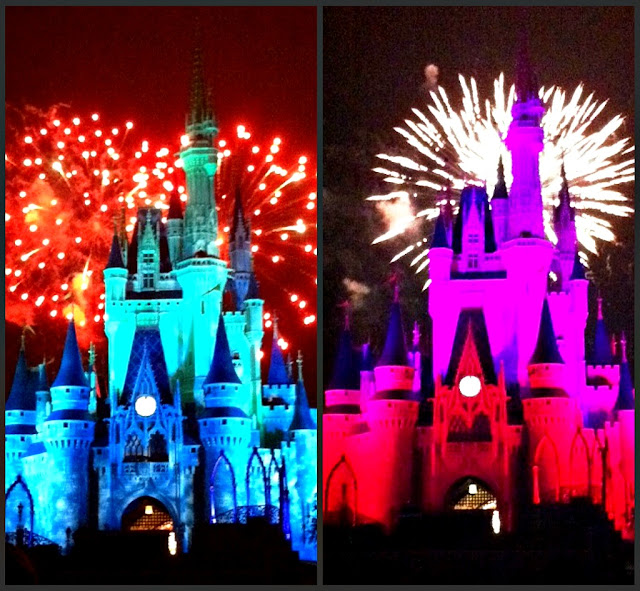 After the show…we were done. Completely done. We had been on our feet all day and we packed as much into Magic Kingdom as possible, so we headed back to the resort and realized…

…we were completely starving. A much needed and far too later dinner was in store. We followed that up with a quick soak in the hot tub and then off to bed. After a jam packed 20 hour day, it was time to rest before…Universal Studios!

To be continued…
With love and God bless,