Hello friends! I am awake today and slowly starting to function like a normal human being. I even took a shower this morning 🙂 Baby steps right? I’m going to go ahead and blame my illness on our crazy weather, lack of sleep and being around lots of people this weekend. I think a solid combination of the three are what did me in. Enough about being sick, I have so many fun pictures to share from this weekend!

To start things off, it SNOWED Friday night/Saturday morning! I woke up at 6:30am to run 8 miles on the trail, but decided that wasn’t going to happen when I saw this in my back yard. 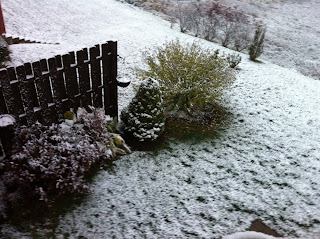 The weatherman said that we could possibly get snow, but they didn’t expect it to stick. I was skeptical and went to bed believing that I would still be able to go on my run. I was clearly wrong. After taking a few pictures, I decided to crawl back under the covers for about 45 minutes. Once my alarm went off again, JP and I got ready and headed to the gym. We got there as soon as it opened. they were still turning on all of the lights as we entered the building! Even though I was sad that I had to run on the treadmill and cut it down to only 6 miles, I’ll admit that it was cool watching it snow outside while running.

After the gym, we headed home to get cleaned up and headed out to Ohio {not West Virginia like I said on Saturday} to watch the Aggie game with some of the guys from JP’s work. It was a blast! I made some awesome healthy cookie dough dip that was a HUGE success. I’ll be sharing the recipe with y’all later this week! Most of the people that JP work with live in the West Virginia northern panhandle or in Ohio and they are all big Ohio State fans! 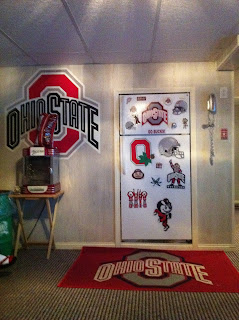 This is just one wall of the Ohio State man cave at Brian’s house. The entire room is filled with Ohio State gear including an Ohio State lazy boy chair! Maggie was able to come spend the day at Brian’s as well and she was super excited to be around a bunch of people who wanted to play with her! We had a ton of fun out in Ohio except for the fact that the Aggies lost to Mizzou 🙁

We got back home just in time to get ready for a Halloween party being thrown by one of our friends on our flag football team! 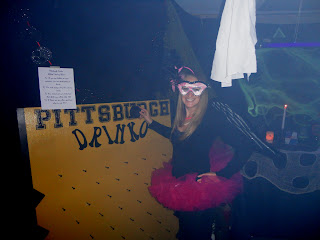 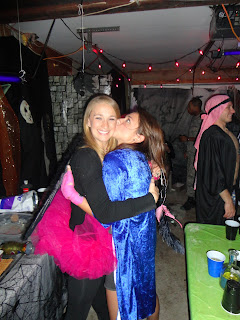 The party was in the garage and it was decorated amazingly! Seriously anything and everything that could be decorated was covered! We had an amazing time and even made some new friends while we were there! Now, even though we had a great time, we were not super excited about waking up at 7:00am for our 8:00am flag football game! JP and I grunted and groaned when our alarm went off, but we still got up and made it to the field even with time to warm up! Surprisingly, the rest of our team showed up too! We had 5 girls and 7 guys and you only need 8 players with at least 3 girls to play. The only problem was that the other team decided not to show up. Seeing as though we were all up and ready to go, we wanted to play! But hey, at least we won since they had to forefit and now we’re moving onto the second round of the playoffs! Since we had a bunch of our teammates at the field with no game to play, we decided to take a team picture!

After the “game,” JP and I played with Maggie for a bit before heading north towards the Grove City Outlets for some early Christmas shopping! We where there for about 3 hours and we managed to get several Christmas presents as well as a birthday present for my baby brother Matt! I still have more shopping to do, but it’s nice to get some of it done early to spread out the costs!

While we were shopping, my nose started going crazy and I was having trouble breathing. Towards the end of the shopping trip, I started feeling absolutely terrible. I was sniffley, coughing and completely exhausted. I practically slept the rest of the day, all night and most of the day yesterday. I’m feeling better and working more today which is a good sign. Hopefully tomorrow I’ll be back to normal or at least close to normal!

I hope everyone has a great Tuesday! I need to take a break from my computer 🙂
Until next time…
With love and God bless,