Wow! Words cannot even begin to describe the amazing experience that my dad, brother and I shared this weekend! Anyone who knows me, knows that I have always been a die hard Green Bay Packers fan…thanks to my dad! I have loved them through their ups and downs, and luckily, this year has been an up thus far!

Friday evening was spent with some of my wonderful Timmer family in Sycamore, Illinois! I was able to see my Aunt Kim and Uncle Tim as well as all of my cousins: Nick, Sam {Nick’s wife!}, Dan, Cindi and Jake! We had some delicious Chicago style deep dish pizza for dinner and we spent the rest of the evening chatting and catching up.

I started Saturday morning off with a beautiful 4.5 mile run. It was a cold, crisp 36 degrees at 7:00 a.m. in Northern Illinois, but the sunny morning in a completely foreign place made it so much better. I ran around my aunt and uncle’s neighborhood, then down to the soccer fields where my little cousin Jake was playing at 8:00 a.m. I met up with Dad and Uncle Tim to watch him! Then Matt, Dad and I had to get on the road to head up north a little further to visit my Uncle Tom and Aunt Terry in Rockford {which is where my dad grew up!} We were able to spend a little over an hour with them and we got the grand tour of their new house!
﻿

﻿﻿After we visited for a while, it was time to hit the road again because we had a little over 3 hours in the car to get to Green Bay! It was SO worth the drive 🙂 We got to Lambeau Field around 3:00 p.m. and spent some time at the Packers Hall of Fame.

After the Hall of Fame, we wandered around the Pro Shop and then found some interactive games where you could test your running and throwing skills! So much fun! We mostly took videos of this, but here are a few pictures!

After the fun and games, we went by Curly’s and a had a beer {no beer for Matt of course!} before we went on the stadium tour! The tour was AWESOME! We were able to see the suites, beneath the bleachers, the tunnel to enter the field and we actually got to go on the field itself! It was magical! 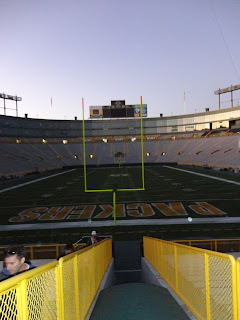 I learned a lot of interesting facts on this tour! Did you know…

Sunday was finally game dayyyy!!! We started off the morning with breakfast at the hotel and by 10:30 a.m. Paul Muraski, one of my dad’s childhood friends, was here and ready to tailgate! We met some pretty awesome people tailgating next to us as well. Here are some pictures of all the fun: 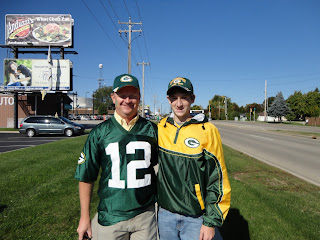 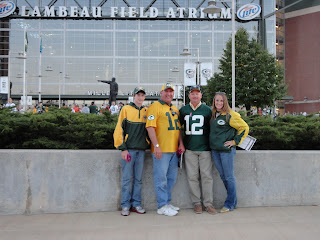 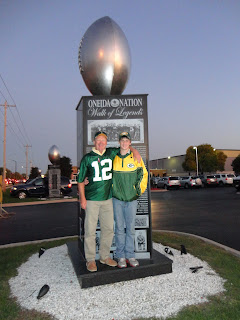 We decided to stay in Green Bay another night because we heard that it would take us 2 hours just to get 20 minutes down the road from traffic. Since we needed to get to Chicago, that would have taken roughly 6 hours, maybe a little less. It seemed more reasonable to continue tailgating and get up early the next morning and drive to the airport, so that’s what we did. 5:30 a.m. came WAYYY too fast. We did get a chance to see the sunrise though!

It was an amazing weekend spend with 2 pretty fantastic guys. I can’t believe I was blessed enough to have this opportunity! Thanks for everything Daddy! You and Matt made this an unforgettable weekend I’ll cherish forever!