On Friday, I started writing a pre-race training recap and ended up being CRAZY busy, so I wasn’t able to finish. Instead, today I’ll tell y’all about the actual race itself, then tomorrow I’ll do a post-race recap of my training and later this week I’ll update y’all on how much fun we had exploring the rest of Philly! I feel like this way I can get in everything that I want to ramble on about and y’all can see lots of fun pictures that I took over the past few days! Needles to say we had a BLAST! Without further ado, I’ll tell you about my best race ever!

That’s right, I said best race ever. Now I’m not saying the race itself was the most awesome or organized (Disney Princesses is still at the top of my charts and may be there forever), but performance wise, my best race by far!

The morning started with a bright and early 5:45am wake up call! We got ready and went down to the hotel lobby to grab some breakfast. I love Hampton Inn free breakfast! I had my usual pre-long run breakfast of 2 slices of peanut butter and banana toast! Luckily the race wasn’t due to start until 8am, so we had plenty of time to eat and digest.

Then we were off to the race! Parking was a nightmare…we left early with plenty of time to drive and park, but the parking lots that were available we not manned, so a lot of people were having issues getting the pay machines to work. Naturally this pissed JP off, and he was even more mad when he had no issues whatsoever paying the machine and parking. We still made it to the race ground with a few minutes to spare; however, Andrea and I NEEDED to go potty before the race and the lines were insanely long. It was ridiculous how long the lines were with just minutes until the race started. We waited while JP checked his bag in and we were going to meet him back at our corral. Unfortunately, Andrea and I just barely missed our corral and we couldn’t see JP anywhere, so we snuck into corral 8 and took off with them. I was a bit bummed that I didn’t get to give JP a hug and and wish him luck on his first race, but at least I had Andrea by my side! At about 8:09 am we were off!

I started running and had a natural adrenaline rush that had my pace a bit higher than I would have liked. I try really hard to keep the first mile slower and build up to my race pace, but there was no slowing down my legs. I was worried that I wouldn’t be able to hold up the pace, but I felt great so I just kept going. The first mile I was pretty focused on JP and where he was. I was sad that we didn’t start together, and I was hoping that he just took off and didn’t wait around for me. (Thank goodness he didn’t wait!) The race path started out winding around downtown Philly with quite a few twists and turns. There were a lot of people cheering out along the course which is great. I love the crowd and supporters and feel as every “great job” and “keep it up” or “you’re almost there” really gives me motivation whether it’s directed towards me or not. By mile 4, I was just cruising! My pace was still around 8:15/8:20, but it seemed harder to slow down, so I just kept running. At mile 9, I felt someone tap my shoulder and low and behold it was JP!!! I had just passed him and did not even notice. I was clearly in the zone and pleasantly surprised to find my husband on the course. I was with him long enough to find out that he started in Corral 7 (our actual corral) and his watch was only about 2 minutes ahead of mine. I wished him good luck on the last 4 miles, blew him a kiss, and was on my way. I was racing the clock and didn’t have too much time to chit-chat 🙂 Surprisingly it wasn’t until mile 11 that I noticed my pace slow to closer to 8:30ish pace which I was still pleased with! The even bigger surprise was that I wasn’t dying yet. I usually hit a wall somewhere between mile 10 and 11, but this time it came right around that mile 12 marker. I could feel a few blisters rubbing and my right foot/hip started to hurt from running on the slanted roads of Philly. Despite the pain and desire to stop, I pushed through. No walking for me! I even managed to pick up my pace a little (which had dropped to about 8:40) to get up the hill that lasted the final 0.3 miles!

Then I did it! I crossed the finish line and immediately stopped my watch. 1:50:44. I couldn’t even believe it. 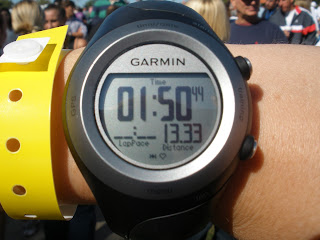 My previous PR was 1:57:32 and I completely smashed that record! My goal was around 1:52:00 and I even beat that. It’s safe to say that I was on cloud 9 and beyond elated. I knew that JP couldn’t be that far behind me, so I waited near the finish line and was able to see him cross! I was happy and excited to see him, but he was just happy to be done. He had a look of “why the hell did I just do that” written all over his face. When I asked him how he felt, his reply was, “I’m not sure if I’m going to barf, pee or sh*t myself.” I about died laughing right there. We grabbed some water bottles and headed over to the photo station. I thought it would be great to have our picture taken together since it was our first race together! I’m looking forward to seeing how it turns out! It’ll definitely end up in a frame on the wall of our office along with all of my other race pictures.

We kept walking through and grabbed lots of yummy post race snacks! Then headed over to the reunion area to wait for Andrea! Once we were all reunited, it was time to head to the beer tent. It’s safe to say that this was JP’s favorite part of the event and it may have been what got him through the last few miles! Here are the official results from the Rock ‘n Roll Philadelphia website and some post race pictures:
﻿ ﻿

That’s all for today! As you can see, the race was amazing and I am proud of all of us for our accomplishments. Next stop Rock ‘n Roll San Antonio in November with Julie Ponder! Here’s to year #3! I’ll finish up my training post for everyone tomorrow! I hope you enjoyed the race recap!

Until next time…
With love and God bless,
Amy