I took SO MANY pictures this weekend and we crammed an incredible amount of activities into 5 1/2 days that I’m going to split Julie’s visit into 2 posts. We’ll start with the most exciting part which was obviously the Niagara Falls excursion. It’s safe to say I have a lot of pictures and a lot to say about that trip 🙂

Fast forward to Friday early evening around 4:30pm. Julie, JP and I hop in the Santa Fe and head north to Canada! We hit traffic pretty early on which was expected, so we didn’t mind it too much until I asked JP if he had his passport. Of course not, which means we have to turn around. I was pretty peeved, but I suppose that it would have been easier if I had both of our passports in the same place and grabbed them both. However, I just got my brand new Amy Gougler passport so they were in different locations. No passport, no Canada. No Canada, no Niagara Falls. No Niagara Falls, no happy Amy or Julie in sight. This being said, we needed to turn around as soon as possible. Since we were only inching forward in traffic and the next exit wasn’t for 2 more miles, JP decided to make his own exit and pulled off the highway and took off across the median. Thank goodness there we no cops! We made it back home and JP was able to grab his passport. JP was also able to track the tar that he stepped in at the gas station all the way up our stairs and across our living room. This turns peeved Amy into incredibly annoyed Amy. Nobody likes to deal with her, so I tried to lighten up. We get back into the car around 5:30pm and are on our way…for real this time!

We decided to trust our GPS and take a different route to get around the traffic on I-79 since we were pretty much just sitting there earlier. It was nice to see different parts of town and Julie got to experience more of Pennsylvania, but I’m not so sure we really saved any time. What we did save was JP’s sanity since he really, truly despises traffic. After the detour, we made it back on the highway and shortly after, it was almost 7:30pm and we were hungry. So, Subway it was. After a quick stop, we were back on the road headed towards New York. Once we got into the Empire State, we jumped on the toll road and little did we know, it had only a few small towns and even fewer exits. Julie and I’s bladders were not agreeing with us, so we HAD to stop. We were finally able to exit and there was not a gas station or store in sight. That meant we ended up having to drive around a bit and eventually found this hole in the wall restaurant. We slipped in and just at that time, it seemed as though everyone in the restaurant had to go at the same time and they were not young. Sweet, sweet old ladies, but slow as can be. They ended up asking us weird questions like, “How did you get so tall?” and they were perplexed when they realized we were not sisters. Eventually, we made it back into the car and about an hour later, we saw this:

We finally made it to Canada! Luckily, our hotel wasn’t far from the border and we were within walking distance from everything, so we quickly changed and headed for the casino. It’s safe to say we could use a drink at that point since we turned what should have been a 4 hour trip into a nearly 6 1/2 hour trip 🙂 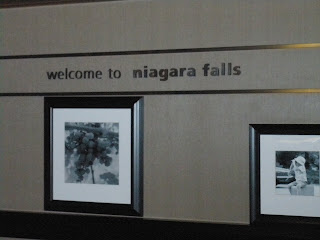 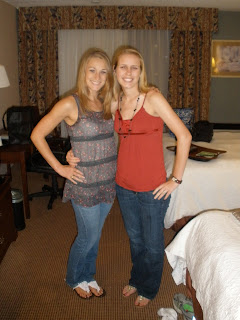 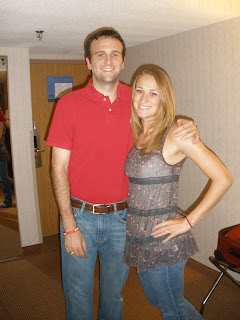 The casino was a blast! They had yummy drinks and Julie and I found a new love Absolut Mango. It’s delicious, take my word for it. That with cranberry juice is devine. It definitely lightened our moods if you know what I mean 😉 Nobody actually made any money at the casino. Julie and I played some penny slots and JP played some black jack. We each lost only about $20. The entertainment and fun we had at the casino was worth the money. By 1:30am, we were exhausted and we fell asleep as soon as our heads hit the pillow!

Saturday morning, we were up and at ’em by 9am. We grabbed some breakfast, got ready and were on our way to explore Niagara. Our hotel was within walking distance, so we packed up the car and left it there for the day. On our way to the falls, Julie and I found several picture ops:

While exploring the streets, we found the Maid of the Mist, which is actually what we were looking for to begin with. This was such an awesome experience and I highly recommend it to anyone who goes to visit the falls!

After the Maid of the Mist tour, we decided to wander around. We walked up and down the parks that line the falls and were able to get some more really great pictures! 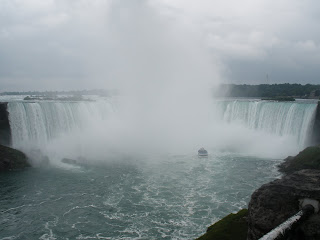 We walked around the various gift shops and found some pretty neat stuff!

After all the exploring we did, it was time for lunch:

After we refueled, it was time to explore a bit more!

After exploring all afternoon, we were wiped and ready to head home. Luckily, the trip home consisted of no traffic, no belongings left behind and only 2 instead of 3 stops. We made it back to town in just under 4 hours which was much more preferable to the 6 1/2 the day before. However, we made it back right around 7pm and the night was still young. Hopefully tomorrow I’ll be able to get back on here and let you know about the rest of our weekend adventures! Until next time…