Skip to Content
Amy's Balancing Act
You Are Reading
40 Week Bumpdate
0
Home Motherhood Pregnancy 40 Week Bumpdate
The day is finally here! The day that I’ve had a big heart around on my calendar since the morning of December 15th when I found out I was pregnant. Today is officially my due date. I didn’t make it to my due date with Chloe due to a couple of reasons. I chose to be induced at 39+5 for severe back pain and the fact that my dad was starting a traveling job that would have him in Denver for a few weeks with no chance to get back to meet his first grandchild. {You can read more about Chloe’s birth story here if you haven’t already!} That being said, I’ve never been this pregnant before! I’d get into the emotions of it right now, but scroll down a little further and you’ll see how I feel.
One thing to note, all of my momma’s babies were late. I pretty much wrecked her poor world coming a whopping 2 weeks late. Emily was a week and a half, Ben about a week and Matt was 2 days. Each baby came a little earlier, but never before their due date. Maybe Chloe was going to come late too? Who knows? Technically this little boy still has time before he’s considered late. I’m not giving up hope yet! 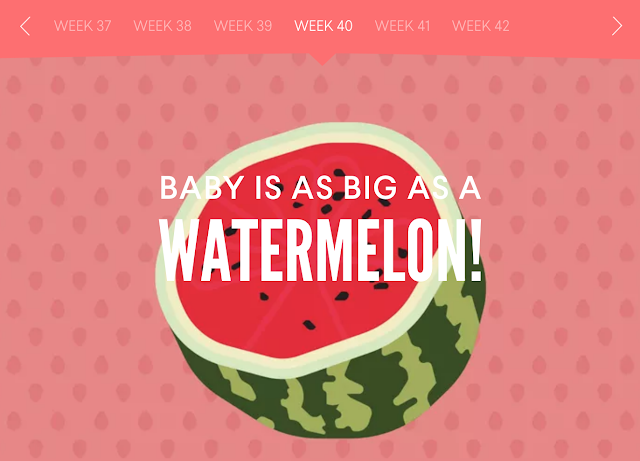 How Far Along?
40 weeks y’all! Today is my due date!
Size of Baby:
A watermelon. That’s right, a big ole watermelon is currently hanging out in my uterus.
He could range from about 7-9lbs and lengths from 19-21 inches. Now we just have to wait and see how big he’ll be! My doctor thinks he’ll only be a little bit bigger than Chloe was at 7lb6oz. We’ll see soon enough!
Weight Gain:
Something like 33-34lbs. I’m retaining water pretty bad this week! 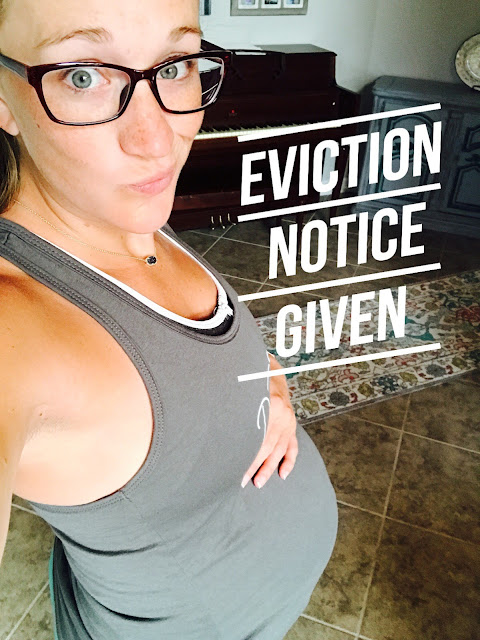 Stretch marks:
I’m lucky enough not to have any! Just the ones under my boobies from their first great expansion when I was pregnant with Chloe. Going from a barely B to a DD will do that to a girl.
Symptoms:
The hip pain and pelvic pressure has been really rough the last few days. My pelvic complex feels so loose because well, it is. All of the relaxin in my body is working hard to loosen my ligaments and open up my pelvis for baby boy’s exit. If only he’d decide to descend and make his debut! Other than that I’m dealing with mild nausea when I wake up and LOTS of Braxton-Hicks contractions every evening. 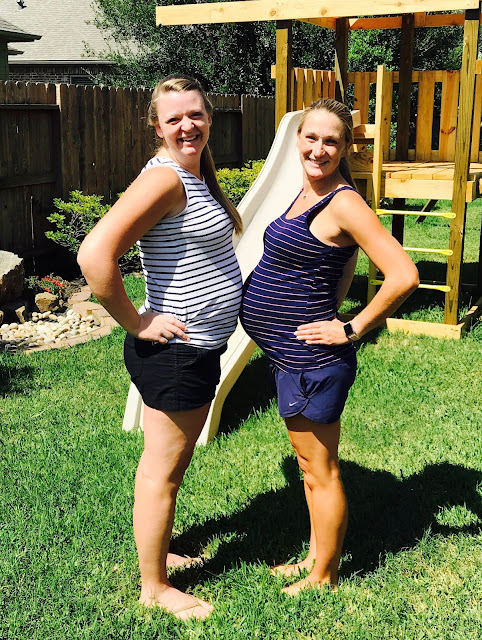 Cravings:
Tacos, cereal, peanut butter, sweets and other things that really aren’t good for me.
Mood:
All over the place. Did you know that in the last few weeks of a woman’s pregnancy she produces the same amount of estrogen that a normal woman produces in a year? Yeah, that’s why we’re crazy! The raging hormones are no joke. I can go from happy to bawling in a matter of seconds. Emotionally I’m so ready to meet this baby. I can’t wait to see his face and watch his sister interact with him for the first time. I know I’ll be a hot mess. I also know that things will get harder once he’s here {as people are constantly reminding me these days…I don’t need this advice y’all, I just want to be unpregnant!}, but I knew this going into getting pregnant again. I’m as ready as I’ll ever be for these changes. I know I’ll have to take it one day at a time and that I’ll be incredibly sleep deprived, but it too will pass. Right now I’m just uncomfortable and want this beachball to come out. End mini rant.
Nursery: 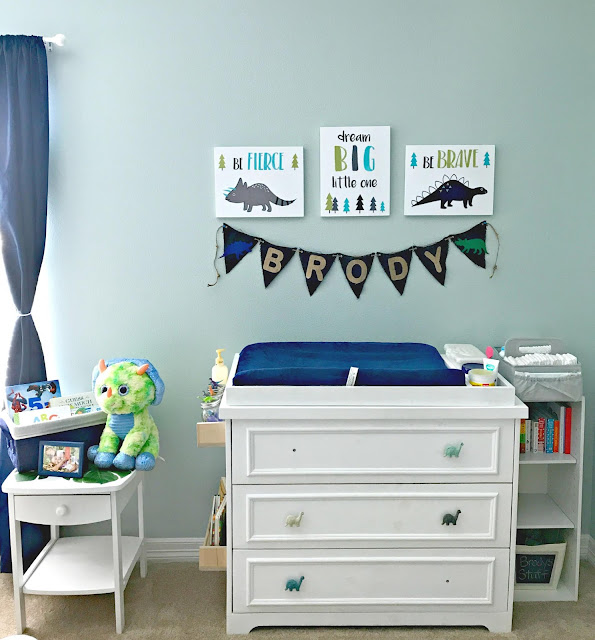 In case you missed the reveal post, check it out here!
Movement:
Can’t stop, won’t stop. A lot of babies slow down their movements at this time in pregnancy because they’re running out of room. Not this guy! Apparently he still has plenty of room thanks to all of the fluid I still have. We did an ultrasound yesterday to make sure his fluid levels were safe. Not only were they safe, but they were double what my OB wanted to see!
Sleep:
I’m lucky enough to still be sleeping pretty well all things considered. I’m trying to soak it up while I can because I know that will be changing shortly! I’m still getting up 3-4 times a night to go potty,  and I have trouble falling asleep after at least one potty break each night. I always fall asleep eventually though! 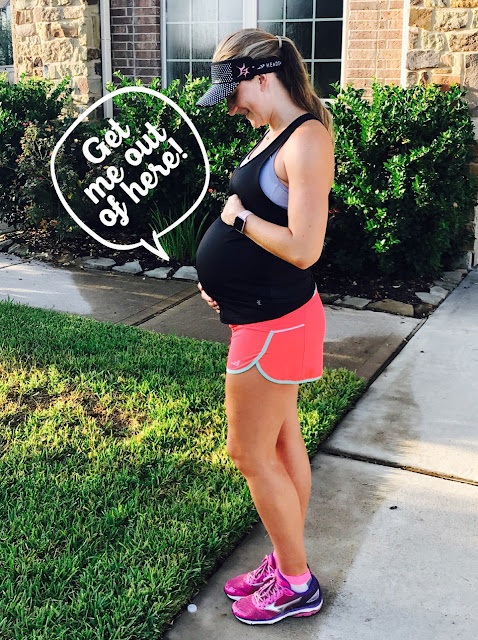 Workouts:
Walk, walk, walk, walk, walk! If you follow along with me on Instagram, I have been posting updates every morning after my walk. I actually didn’t post the other day and I got so many messages from people asking if I was in labor. Nope, I was just grumpy and over being pregnant so I didn’t post. That backfired! But yeah, I literally walk 2-3 miles every morning for the last 4 weeks. I think I’ve only skipped a handful of mornings for one reason or another. It’s definitely getting harder and I’m getting slower, but it’s so worth it.
What I Miss:
Tying my shoes without wincing in pain. Laying on the couch in whatever position I want. Wine. Margaritas. I think wine and margs would definitely help my state of mind these days!
Labor Signs:
Contractions every night that are inconsistent and always die off after about an hour or so. I’m currently dilated to 3.5cm and 60% effaced. My doctor said that baby boy has descended some more, but my cervix is still high. We’re both honestly shocked that I’m still pregnant at this point since I started progressing weeks ago. We did an ultrasound yesterday to check fluid levels since my fundal height came back a bit smaller than the week before. She was worried that my levels may have dropped and wanted them to be above a 6. Well it turns out they’re at a 15! No wonder he’s so comfy in there, he still has a nice cushion to relax and hang out in. On the plus side, we’re both incredibly healthy and willing to wait it out a bit longer! 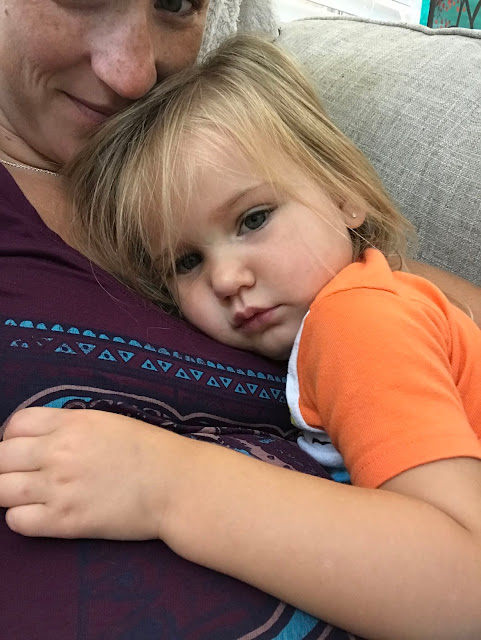 Best Moments The Past 2 Weeks:
Soaking up moments with my baby girl before she officially becomes a big sister from couch snuggles to outings. She’s been a bit of a mess lately which definitely stresses me out from time to time {just kidding it stresses me out at some point daily lately!}, but I know it’s because of all of these changes headed her way. She doesn’t even realize what’s truly about to happen.
Looking forward to:
Going into labor, giving birth and meeting this baby boy!
There you have it! My 40 Week Bumpdate which I wasn’t even able to do with Chloe. I’ll admit, I was reaaaallllly hoping that I wouldn’t get to do it with this baby either, but here we are! My next doctor’s appointment is on Monday and at that point we’ll discuss induction options. Until then I’m going to keep up with all the old wives tales and hope that eventually something will work and he’ll come out on his own!
Missed a bumpdate or want to compare stats?
We’re Pregnant | Gender Reveal | 1st Trimester | 18 Weeks | 20 Weeks | 22 Weeks | 24 Weeks | 26 Weeks | 28 Weeks | Traveling Pregnant | 30 Weeks | 3rd Trimester Must Haves | 32 Weeks | Baby Shower | 35 Weeks | Nursery Reveal | 37 Weeks | Maternity Photos | 39 Weeks