Skip to Content
Amy's Balancing Act
You Are Reading
Callin’ Baton Rouge!
0
Home Travel Callin’ Baton Rouge!
We’re back to another Monday after another weekend road trip! Three out of the last four weekends we have road tripped to somewhere or another. Each weekend the trip got longer and longer! College Station to Waxahachie to Baton Rouge! This last weekend we were in Louisiana for a wedding and it was definitely Chloe’s longest car trip yet.
On Friday, we left in the late afternoon, and it took us just shy of 7 hours to get to Baton Rouge. {In case you’re wondering, it’s only supposed to be a 4 1/2 hour trip!} We hit traffic in every major city along the way. Shockingly, we only had to pit stop twice. Once at Bucees for drinks and snacks and again for dinner. Since we knew there was more traffic and a couple more hours of driving, we couldn’t wait until we got there. Plus, our tiny human was “humrie” aka hungry and needed to get out and burn some energy!
Once we made it to the hotel, we hung out with my sister and brother-in-law for a few hours before calling it a day and passing out. 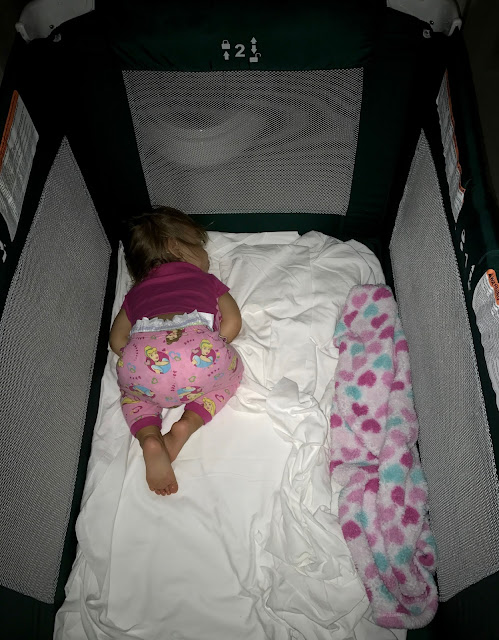 Chloe had no problems sleeping in a strange place. She went straight to bed and slept all night! I snapped this picture of her around 8am. In case you’re wondering, that is indeed a toilet on the other side of the pack n play. We put Chloe in the bathroom when we’re traveling because she likes to have her own space. If she wakes up at night and sees us, then she freaks out. If she’s alone, she sleeps soundly. So the bathroom it is!

When we got up, we thought it would be nice to walk to the Starbucks that was only half a mile away. Well, we attempted and failed. There wasn’t a way to actually get there by foot! I was bummed because I love walking in new cities, but still got a little walk and I got my coffee which immediately cheered me up. Because let’s be real, coffee makes me happy.

After our adventure, we hit the pool! My sister was busy getting ready since she was a bridesmaid, so Matt, JP, Chloe and I decided to swim for a bit. 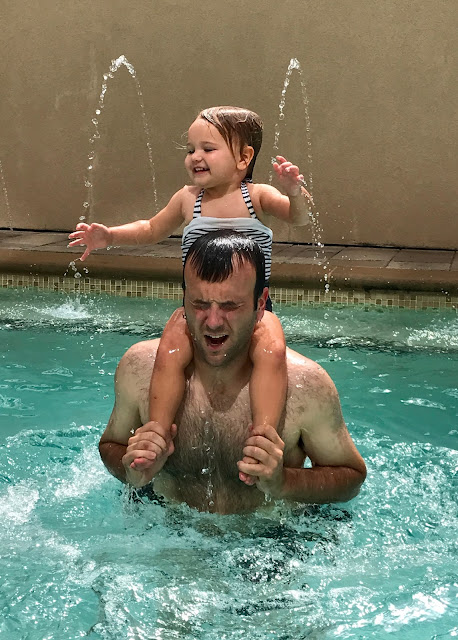 My little mermaid had the best time. She’s becoming an actual swimmer, not just a baby pretending to swim in the water. She can float on her back, kick her legs when told, go underwater with ease, control her breath and even swim from a step to me about 6 feet away! I’m a proud momma if you can’t tell.

We swam for about an hour and a half before we were drained. The UV index was at a 10 and it was HOT. Chloe looked like she was getting pink despite all the sunscreen we put on, so it was time to go inside and get ready for lunch! 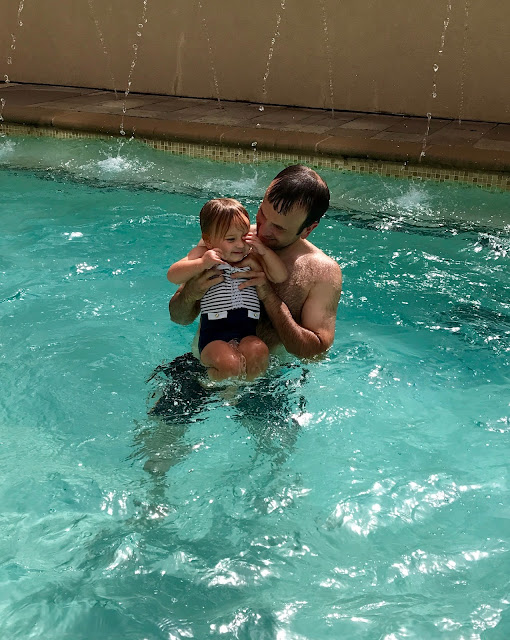 The 4 of us went to lunch at Roux 61 for some po boys! We were in Louisiana after all, so we needed some po boys in our lives. After lunch, Chloe and the boys wanted to nap, so I decided to invite myself to the bridal suite. 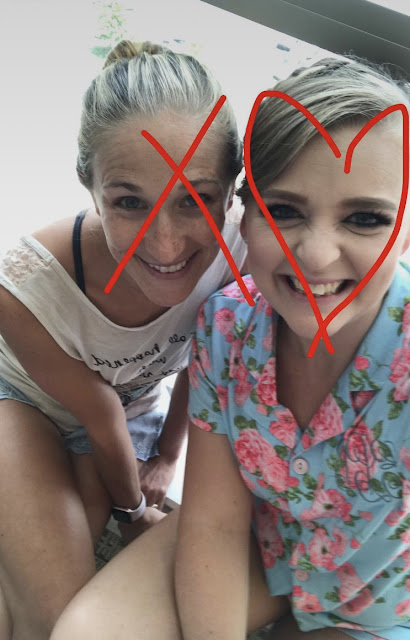 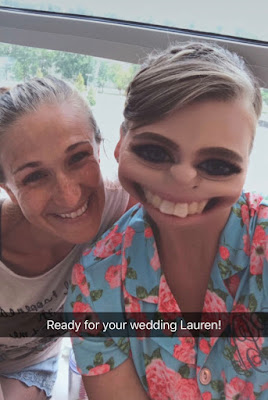 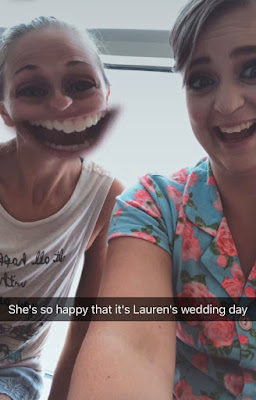 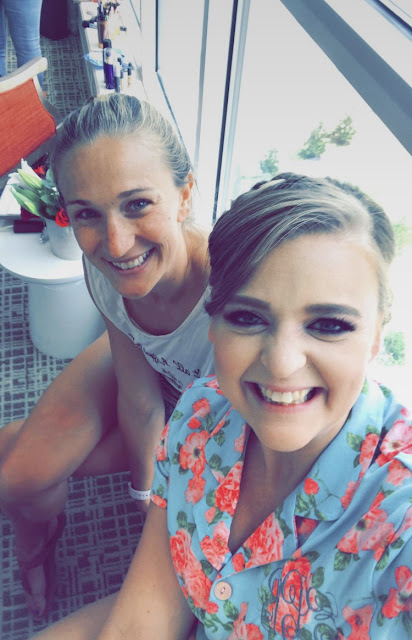 Since I was there, I was able to help them take some pictures and keep the mood light hearted when everyone started to get nervous and anxious. Once they left, I got ready for the big event!

I’ve known Lauren since she was little. Emily and Lauren have been friends since we moved to Sugar Land when they were in second grade. I got to know Lauren better when she was in middle school and high school. I kind of became the big sister that she didn’t have since she’s the oldest of 3 girls. I coached her younger two sisters in cheerleading and would see Lauren all the time. I talked to her, gave her advice and we became good friends. I’m so lucky to have such a sweet, kind hearted girl in my life! 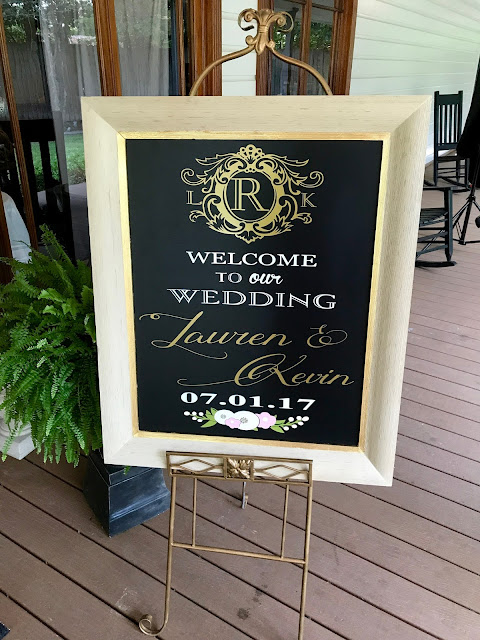 The wedding was at Ashley Manor where the ceremony and reception were both held. I do love weddings that are all in one place! The ceremony was beautiful. Just the right amount of humor and seriousness. After the opening prayer, we all said “amen” and two seconds later when it was silent, Chloe yelled “AMEN!” It was adorable and hilarious. Then she started saying “Hi Mickey. Hi Mimmie. Hi Daisy!” so we had to get her to calm down and watch Moana. 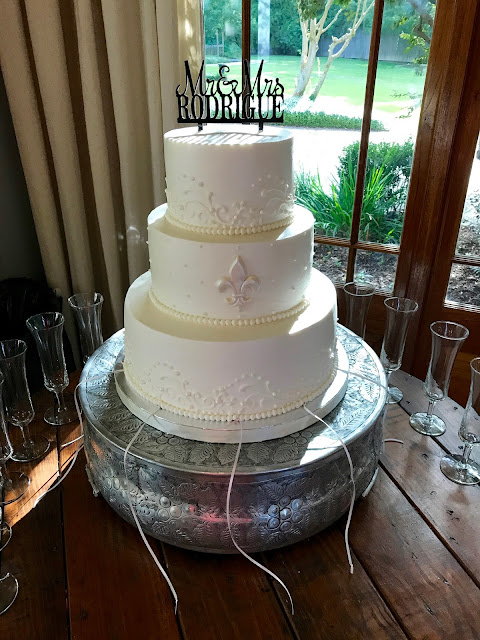 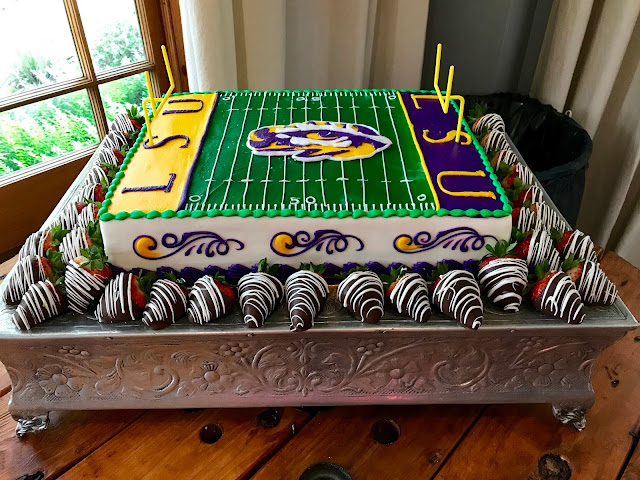 The wedding went straight into the reception. They had a wall that opened up the food and cocktail area. There were about a dozen or more different food options! Instead of a sit down dinner, they had the food set up buffet style and you could come and go all night long. It was definitely the best wedding food I’ve had…possibly ever. They had your typical fruit, veggies and cheese plus chicken fingers for the kiddos. They also had cajun seafood alfredo, crawfish pies, boudin stuffed chicken, spinach and bacon stuffed pork! Y’all it was delicious. It was nice to get small plates, try everything and then eat more of our favorites. 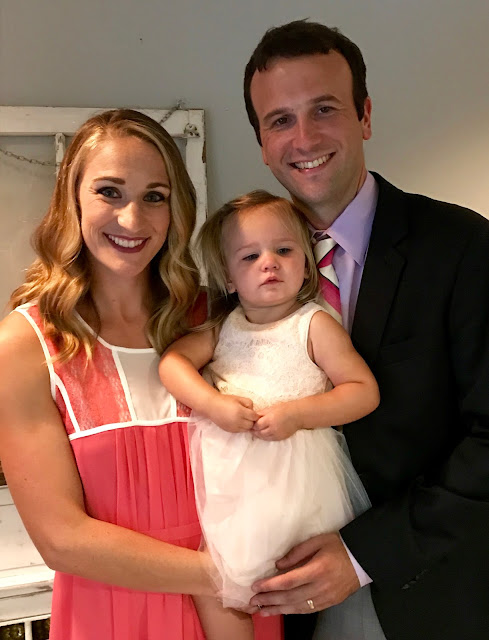 At some point, we decided to attempt a family picture. We tried having Emily hold the iphone, but it looked like Chloe was looking off glazed into space. Then we gave it to her, and this is the best we could do. 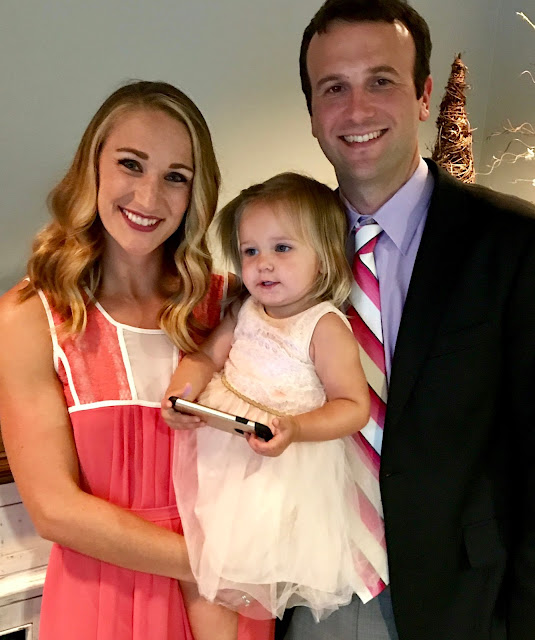 At least she’s cheesing right?! The rest of the night we spent dancing and photo boothing! We attempted to get 7 people into a photo booth meant for 2 people. It was a valiant effort, but not quite a success. It made for funny pictures though! As far as dancing goes, that’s what I do at weddings. I requested my favorite wedding jam, Party in the USA, then danced the rest of the night. Little Chloe even danced with me some! She did the Cupid’s Shuffle, but mostly she just wanted me to spin her around and around. 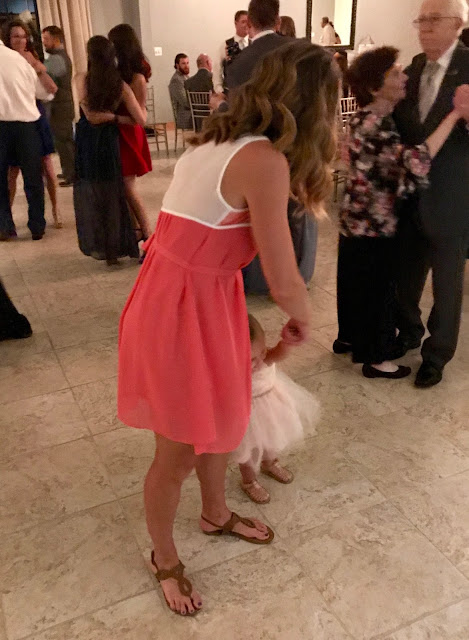 Towards the end of the night, Chloe crashed. We were able to set her up at a table with Moana on the iPad and just let her chill. She was so subdued with a fun party going on around her. It was hilarious and she was in her own little world. 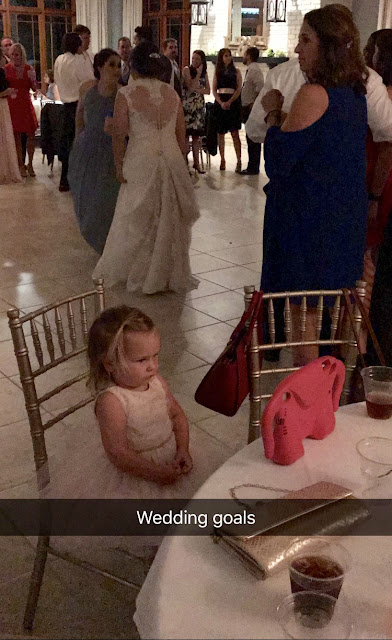 Of course I barely took any pictures at the wedding. Most of these are from my sister or JP snapped them while I was dancing! We did get the photographer to take some of us with the bride, so I know I’ll have those eventually.

We didn’t get to bed until just before midnight and Chloe decided that we should wake up at 6:45am. Not only did she decide that we needed to wake up, she also decided that we needed to go. She kept saying “let’s go” or “get out.” So we slid out of bed, brushed our teeth, I put in my eyeballs and we left our room. All because our toddler said we had to. We ended up heading back to Starbucks, because coffee, then we went to a McDonald’s next door. Chloe loves sausage biscuits, so she was a happy girl. The things you do to make your tiny humans happy. 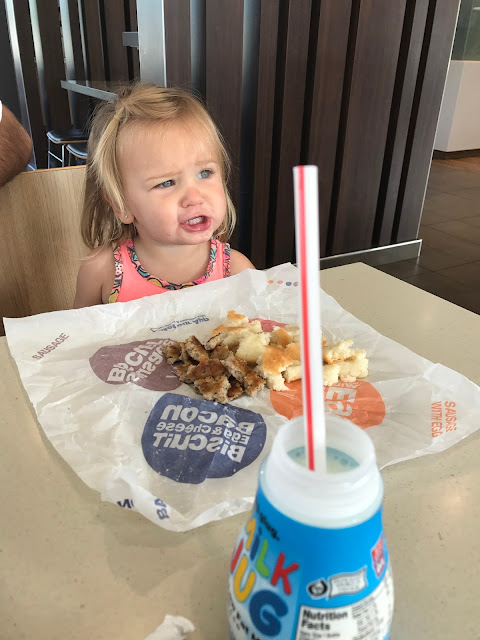 Eventually we made it back to the hotel to pack up and head home. We met up with Emily & Matt and John & Kelsey for brunch before hitting the road. About an hour into our drive, we stopped at Candyland Cottage for some old school treats! I wish I would have taken a picture, but I didn’t. I was tired and ready to be home at that point.

It was a very fun, but tiring weekend! This momma needs her sleep! Chloe usually sleeps in, but we definitely had her out of her element on Saturday. Now it’s time for a fun, relaxing week at home. Happy Monday y’all!

To Lauren and Kevin,
Your wedding was absolutely beautiful and so much fun. I’m so glad that my family was able to Baton Rouge to celebrate with y’all! I wish you many, many years of love and happiness. I pray that your love grows for one another as the years go on. I pray that you lift each other up in the hardest of times. And I pray that you find joy in each others eyes. They say marriage isn’t easy, and whoever they are, they’re right. It is work, but the best kind, so keep working at it no matter what. Because it’s worth it. I love you both and I hope you’re enjoying Barbados!