Skip to Content
Amy's Balancing Act
You Are Reading
Tinkerbell Half Marathon Race Recap!
0
Home Running Races Tinkerbell Half Marathon Race Recap!
Get ready and beware of picture overload! The best thing about Disney races are all of the wonderful picture opportunities. Okay, maybe not the best thing, but it’s definitely up there. So let’s take a look at my 23rd half marathon! 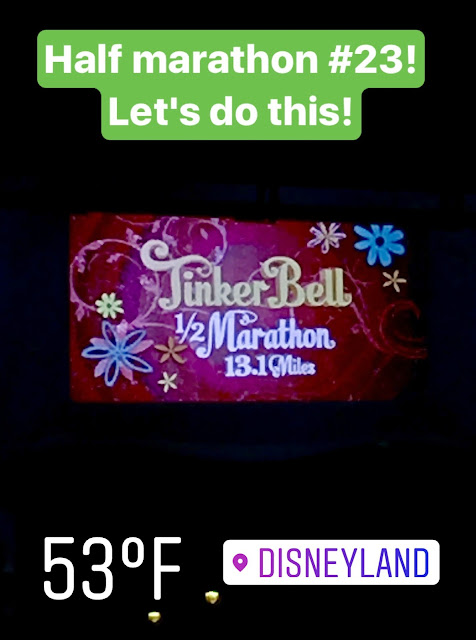 As you can see above, I got to the start line dark and early with gorgeous temps! My alarm went off at 3:30am and I was out the door at 4:00am to catch the bus from the hotel next door. My timing was perfect and I only had to wait for about 10 minutes before the bus came. Luckily it was with a bunch of other friendly runners, so I had plenty of people to talk to.

The set up was definitely different than Disney World. The bus dropped us off at the main bus stop at the front of the parks. Then we walked through the main park entrance area and all the way through Downtown Disney to the parking lot out past the Disneyland Hotel. {Helpful tip: Go potty in one of the many restrooms in Downtown Disney before you get to the corrals! Yay for flushing toilets!}

The corrals were set up past the parking lots! I was in Corral B…not too shabby since I haven’t run a sub 2 hour half marathon since before I had Chloe! Waiting in the corrals was just like at Disney World. runDisney has some awesome MC’s that help get the crowd pumped and excited before the race starts. It’s early, we’re tired and kind of anxious to get started, so I appreciate the effort they put into making the start of the race great!

Okay, so you’re probably ready to hear about how the race went right?! The first corral started at 5:30am, so my corral took off at about 5:35am. The first mile was kind of a blur. All I know is that we ran on some roads and just before mile 1, we entered Disneyland at the very back of the park through Mickey’s Toontown! We ran through Toontown and were headed straight for the Matterhorn! Cue all the pictures… 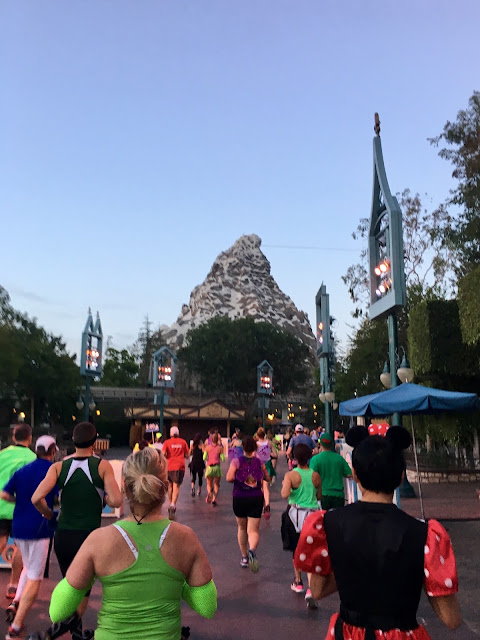 Before we could get to the Matterhorn, we hung a slight right towards Sleeping Beauty’s Castle and ran straight through…so naturally I needed a castle selfie! 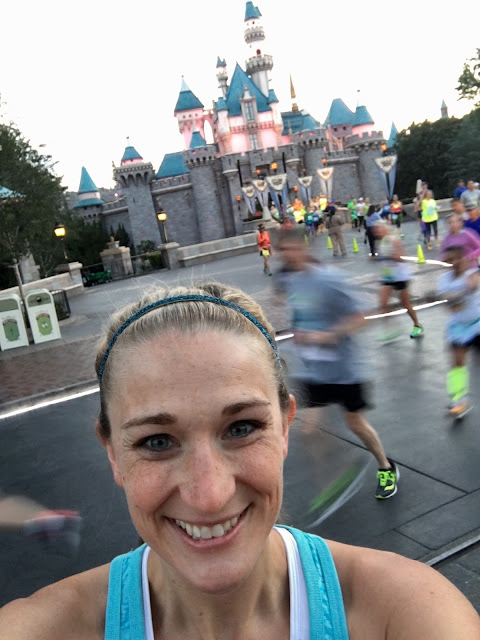 After we went through the castle, we went straight down Main Street USA. The first character stop that I noticed was just outside of Mickey’s Toontown with some of the fairies. The line was kind of long and I wasn’t dressed like Tink or any of her friends, so I decided to skip it. 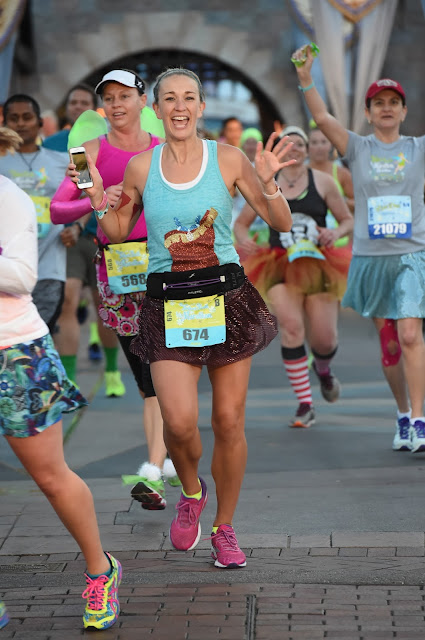 But I had no intentions of skipping all the characters! Character pics are the BEST part about Disney races. While running down Main Street, I looked over and saw Chip and Dale! I hopped in their line which only took a little over a minute. 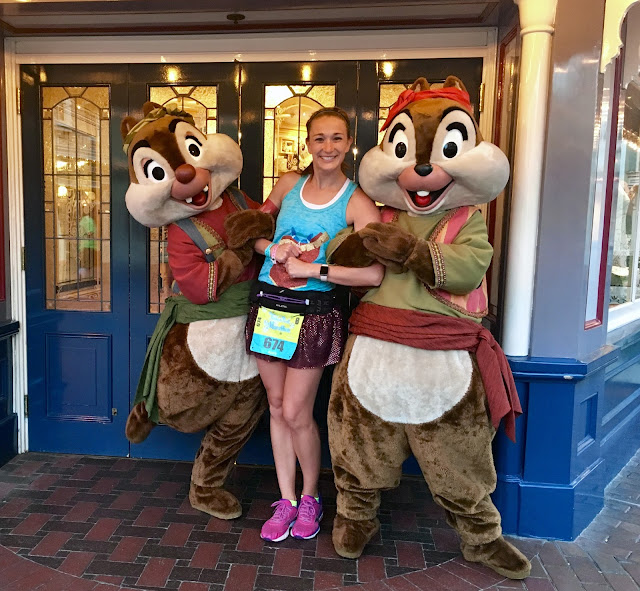 While in line, I checked my phone and saw a text from JP! They were waiting right outside of the park in the area where we crossed into California Adventure at about mile 1.5. When I saw them, Chloe’s face lit up and she was calling out for her momma! I had to stop and get a quick selfie with my greatest support system before I was on my way. 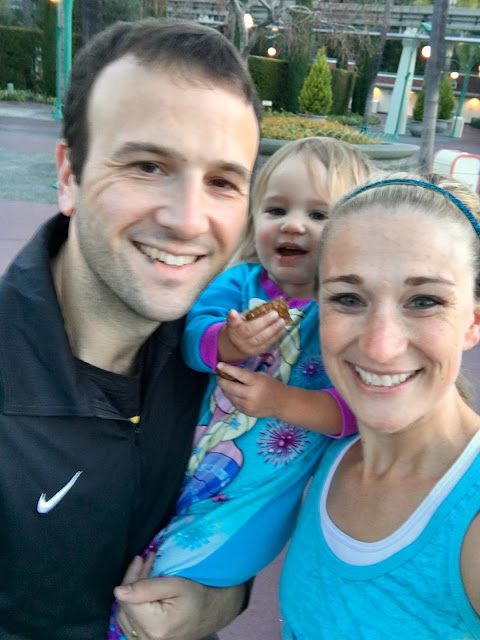 Next up, Disney’s California Adventure! We ran straight through the front gates towards the Boardwalk. Naturally, another selfie was necessary! 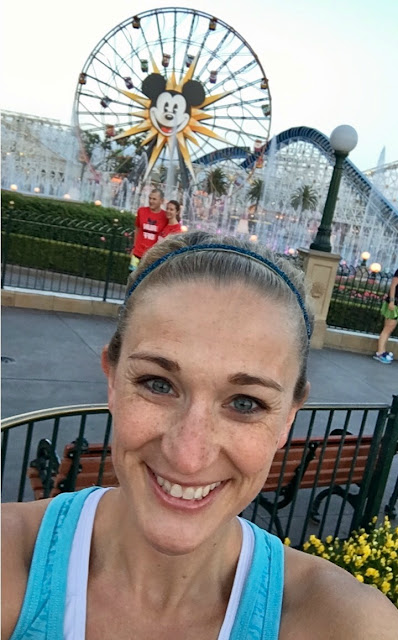 We ran over the bridge to the Boardwalk. Then we ran down the Boardwalk by all of the rides and out the back of the park. At this point we’re at about mile 2. Yes, I’m only at mile 2. {Don’t worry, once we get through the parks, I have less pictures and less exciting things to share!}
We ran through the backstage area and entered back into the park straight into Carsland! 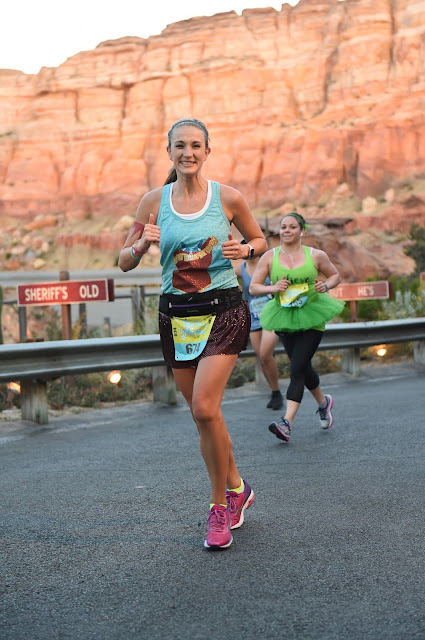 Carsland is super awesome when you’re walking through it with thousands of people, but it’s even cooler when you’re running through with only one hundred or so people around you! I saw Mater and Lightning McQueen hanging out with only two people in line, so I jumped in for a perfect picture opp! 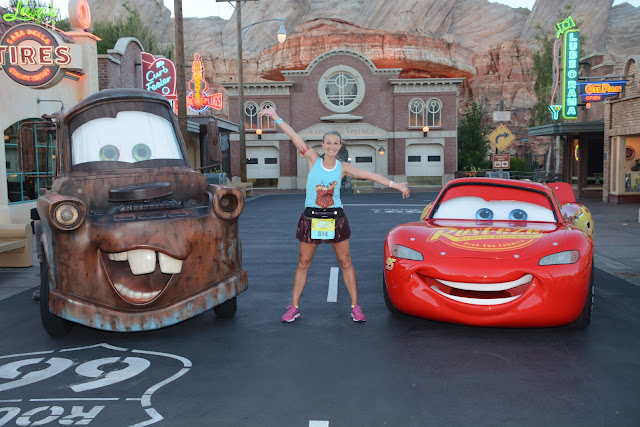 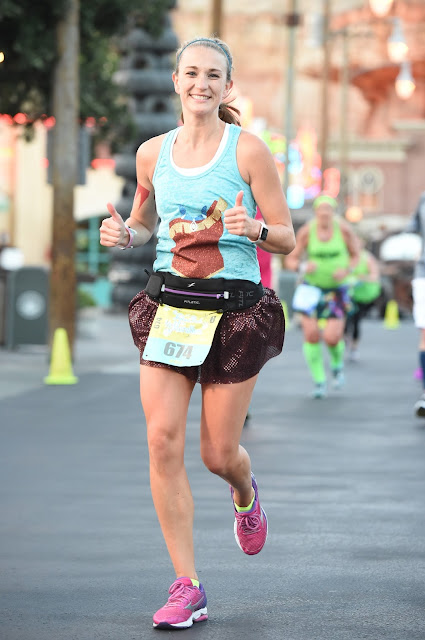 Then I was on my way out of Carsland and into Hollywood Land! I ran by the Frozen Theatre and turned the corner to see Captain Hook and Mr. Smee! I met the Captain at our breakfast with Minnie and friends the morning before, but he didn’t have his trusty side kick with him. I’ve never met Mr. Smee, so I had to stop for a quick pirate picture with these guys. It was the Tinkerbell half marathon after all! {Even though I boycotted the actual theme and ran as Pocahontas!} 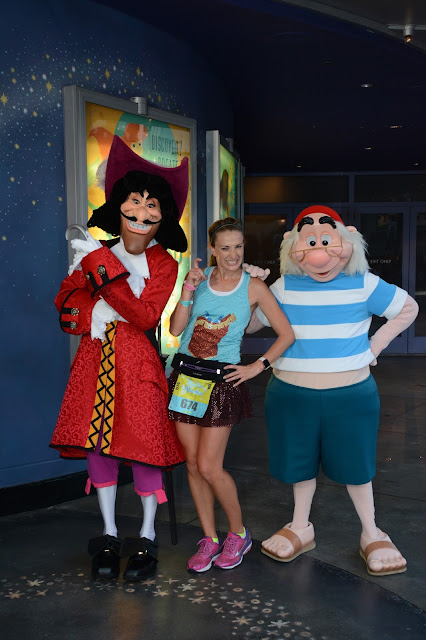 After my quick pic, I continued down Buena Vista Street to the front of the park where we went and crossed back over to Disneyland Park! Since we were crossing back over, I got to see my people again! Chloe was just as excited as the first time I saw her. I figured one selfie was enough and had my momentum going since I was at mile 3 at this point. So I just kept running… 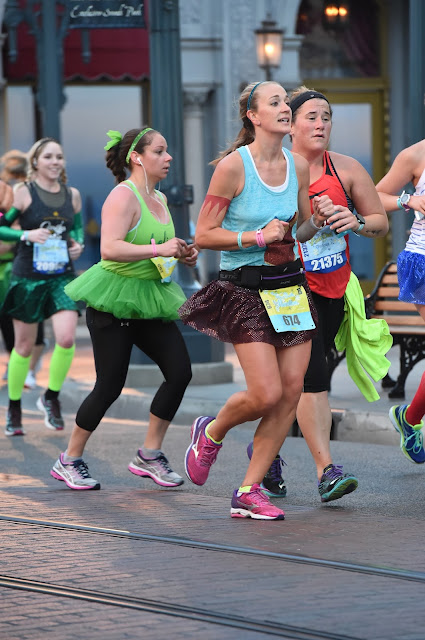 We went back into Disneyland down Main Street and hung a right into Tomorrowland. We ran by the Astro Orbiter, Buzz Lightyear, Hyperspace Mountain and more before we took the turn around back towards Fantasyland and out the back of the park again. I would say we were in the parks for about the first 4 miles of the race.

Then we were out of the parks and on our way through the streets of Anaheim! It was a pretty flat and easy course. I even zoned out for a while and just went on my way. The weather was beautiful and I had the high of running through Disney to keep me going. I started talking to one guy for a bit before he had to stop and walk a bit. Luckily, another gentleman heard us talking and joined me for the rest of the race. We ran together from about mile 6 to the finish!

It was a nice distraction to have someone to run with. We were going the same pace, so it worked out perfectly. We chatted about different runDisney races we’ve done, marathons, races in our hometowns and so much more. It’s always great to have conversations with fellow runners with similar interests! It makes the race go by in the blink of an eye. 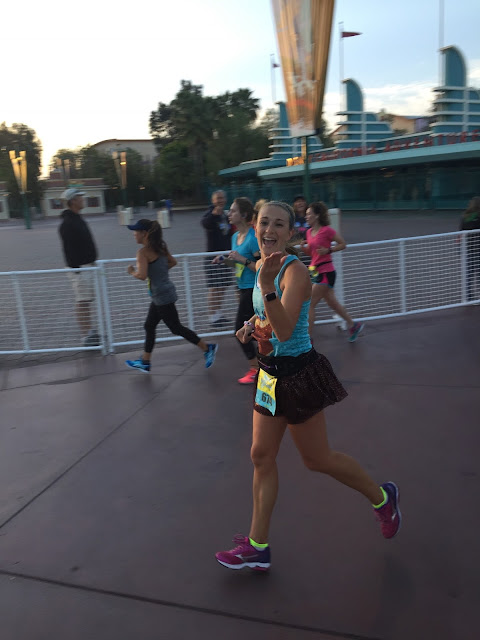 I got to see JP and Chloe again as we were getting close to mile 12! I knew they would be around somewhere, but I didn’t know exactly where, so it was super exciting to see them. Chloe was yelling Momma, Momma, Momma, and JP said that she was pretty set on being with me from that point on. Luckily it was only about 20 more minutes until I would finish, get through the runners post race area and see my baby girl!

I felt GREAT the entire race. No aches and pains. No point where I just wanted to be done. No trouble breathing. Nothing. The only problem was that I needed to pee really bad starting around mile 10. I had to run the last 5K holding my bladder to the best of my ability. I’m serious. No fun, but I managed. Bladder problems post baby are no joke y’all! It may be TMI, but it was part of my race so y’all get all the deets. 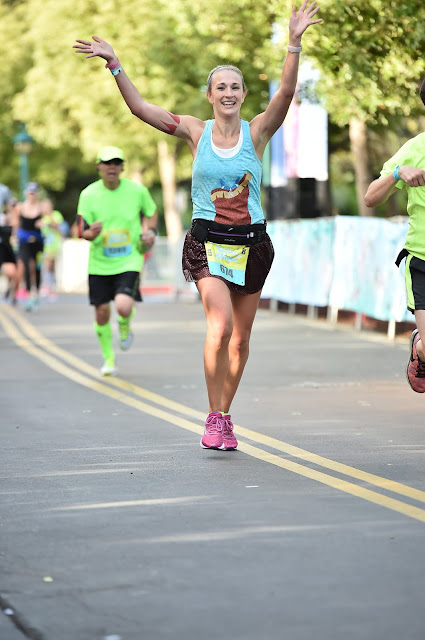 I think I was feeling pretty great the whole race thanks to the amazing weather that we rarely get in Houston, let alone in May! I also trained pretty well since I was able to pick right back up from running Princess in February.

As we would see the finish line, my running buddy {his name is Travis and you can see him in the bright yellow!} said, “So are we going to sprint this out and finish strong?” How do you say no to that? Of course we are! We took off and did it! 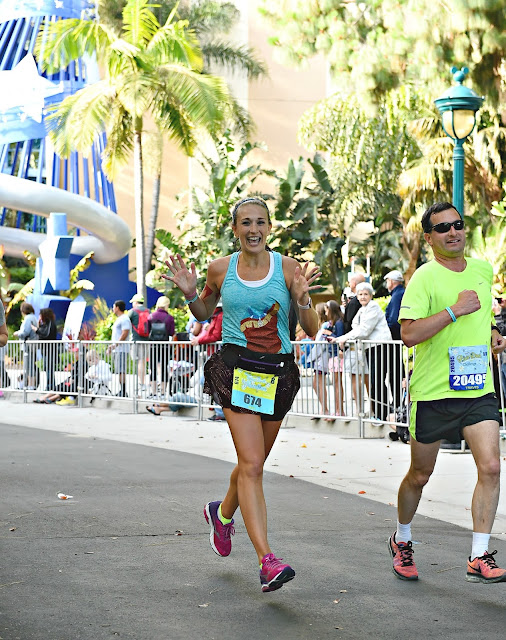 Naturally, we had to take a selfie before parting ways and finding our families! 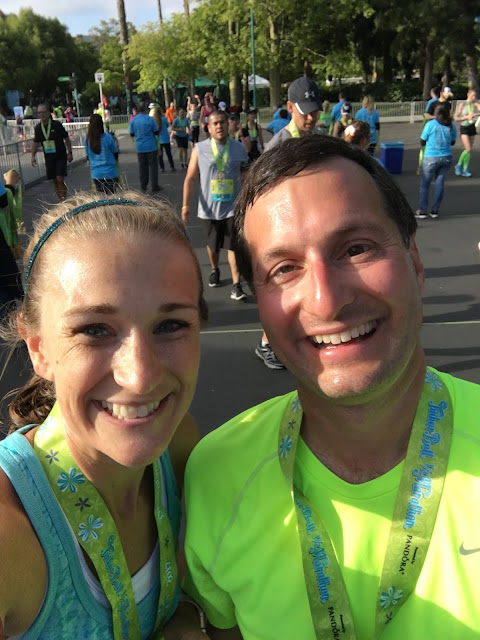 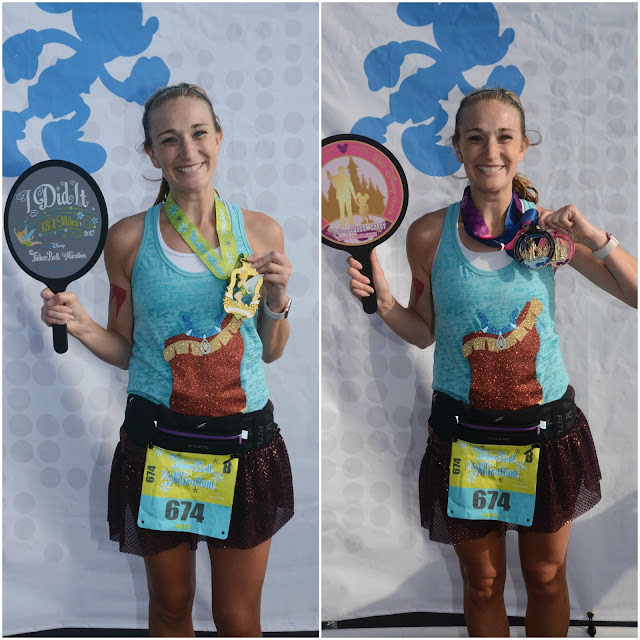 You know what else makes me a winner? Coming out of the runners area and seeing this baby girl running towards me with so much excitement! Like I said earlier, she was determined to see her momma, so I got the best hug from my girl. 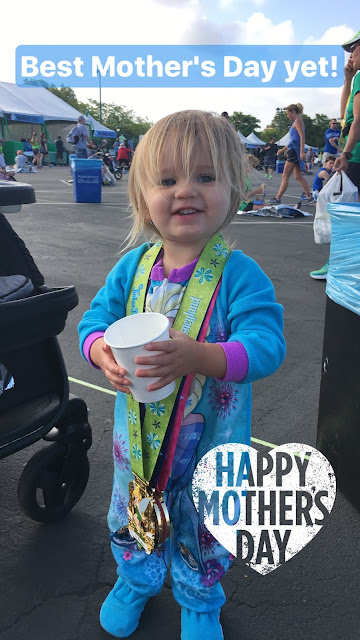 Yes she’s rocking her Elsa sleeper without a care in the world…or shoes! Baby girl had been up since 5am keeping her daddy company while they cheered me on! Best Mother’s Day Ever. Without a doubt. It’ll be hard to get better than this one, but I’m okay with that! 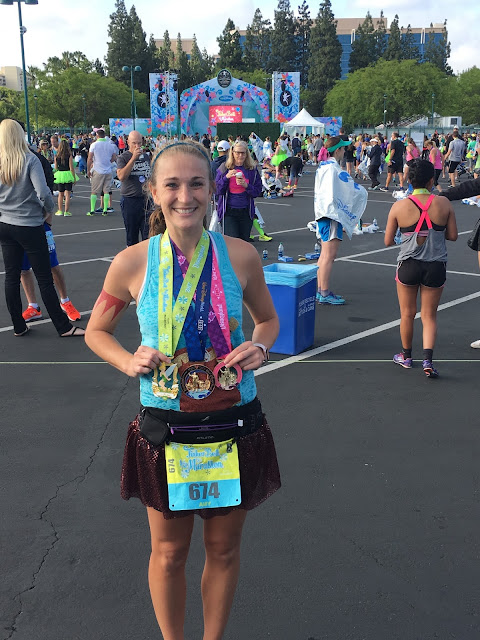 Have you done a runDisney race?
Which race is your favorite? I love Princess weekend at Disney World. It’s still my favorite. Possibly because it was my first runDisney race and it brings back so many amazing memories every year!

In case you missed it, here are some other posts from our Disneyland trip!
Downtown Disney & Expo | Breakfast with Minnie | Disneyland Park

Stay tuned for our day at Disney’s California Adventure Park…