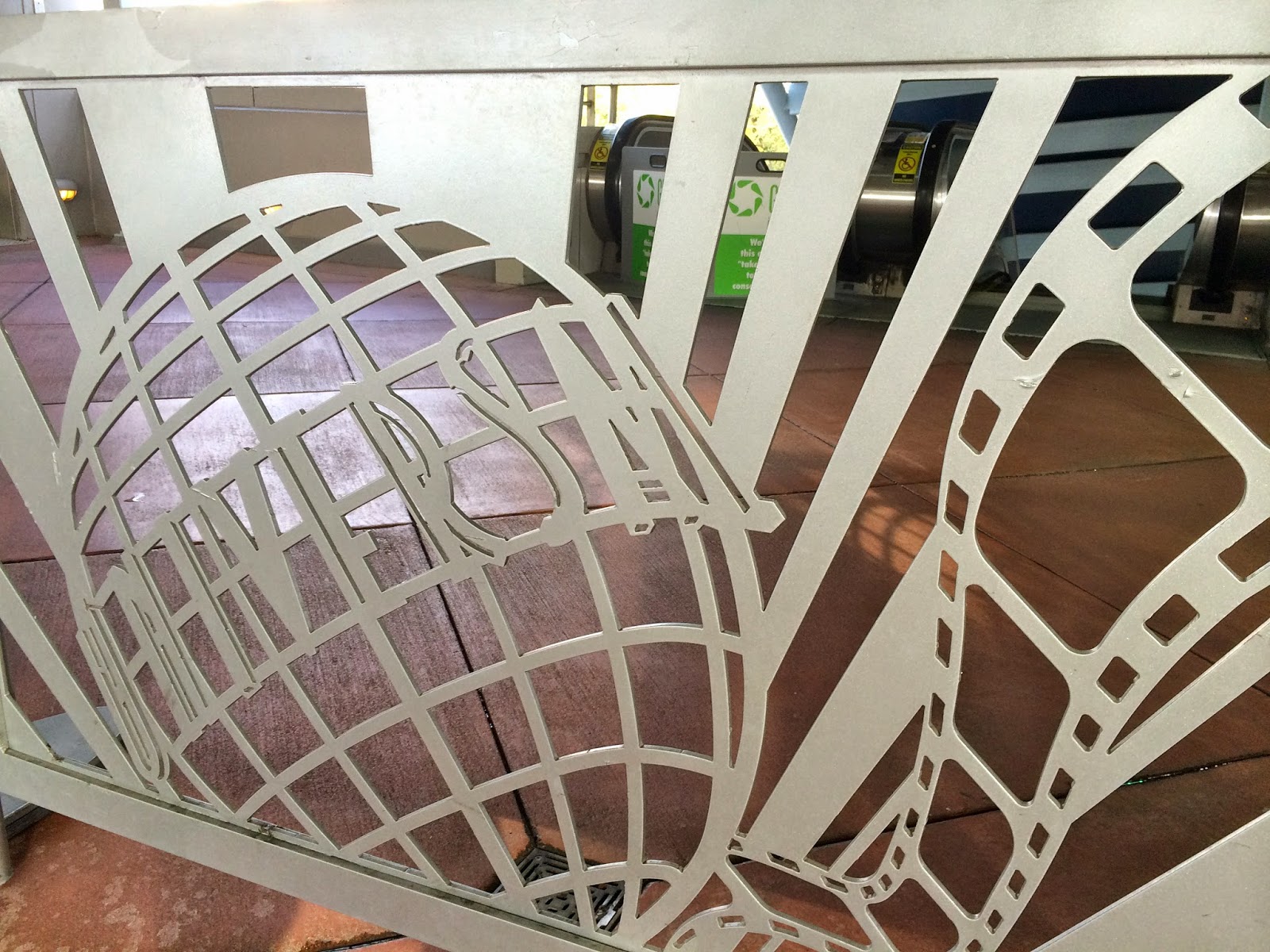 Today I’m going to take y’all somewhere pretty special. Somewheres actually. To a wonderful land called Universal Studios where all of your dreams come true! You can soar alongside your favorite superheros. You can walk through life as a comic book character. You can venture out with the dinosaurs scavenging for fossils and running from dinosaurs in Jurassic Park. {Unfortunately the Jurassic Park ride was under construction yet again. We were devastated. We didn’t end up spending much time here since the other ride is for kids and we have explored the science and learning center the last few years 🙂} 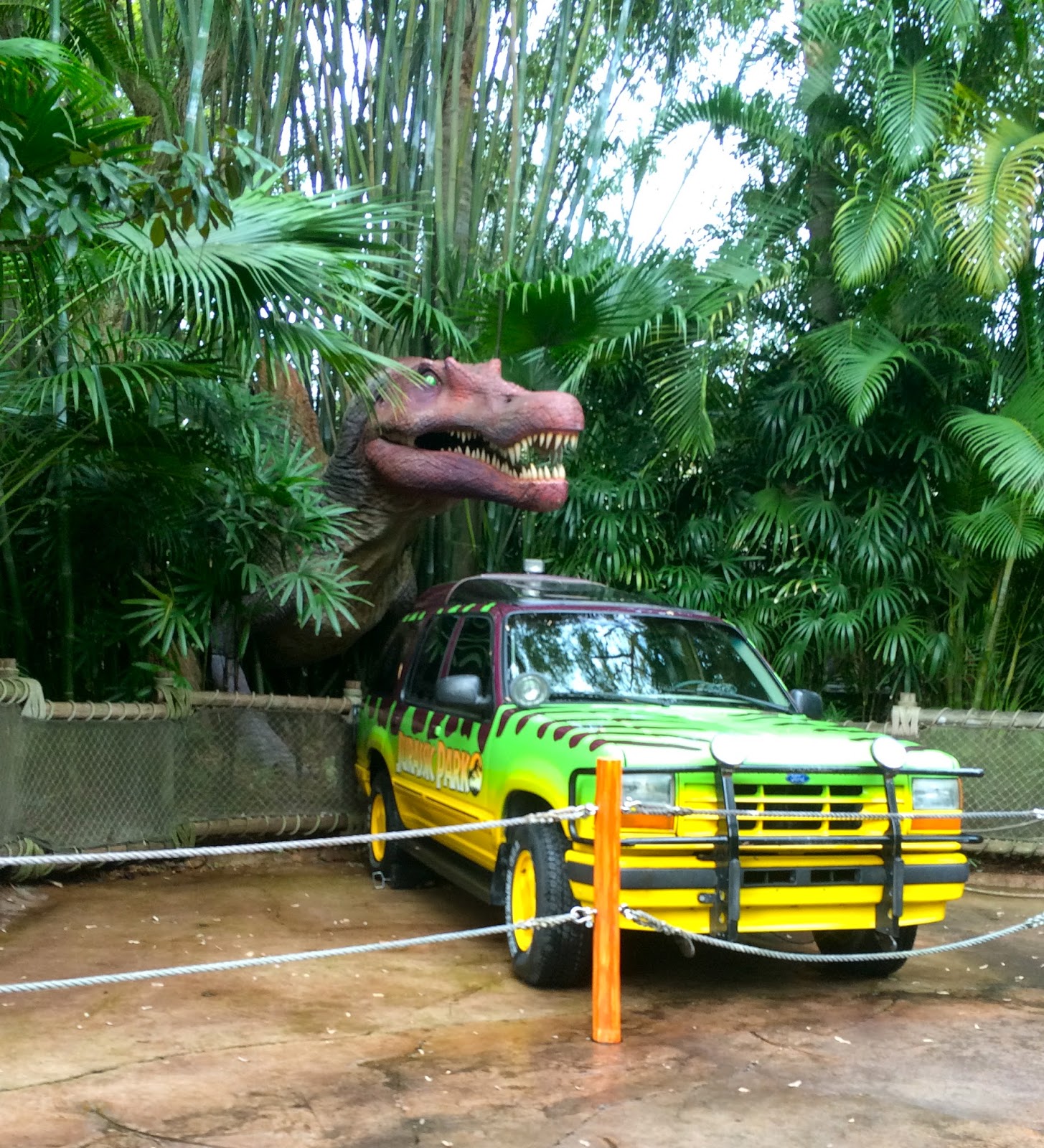 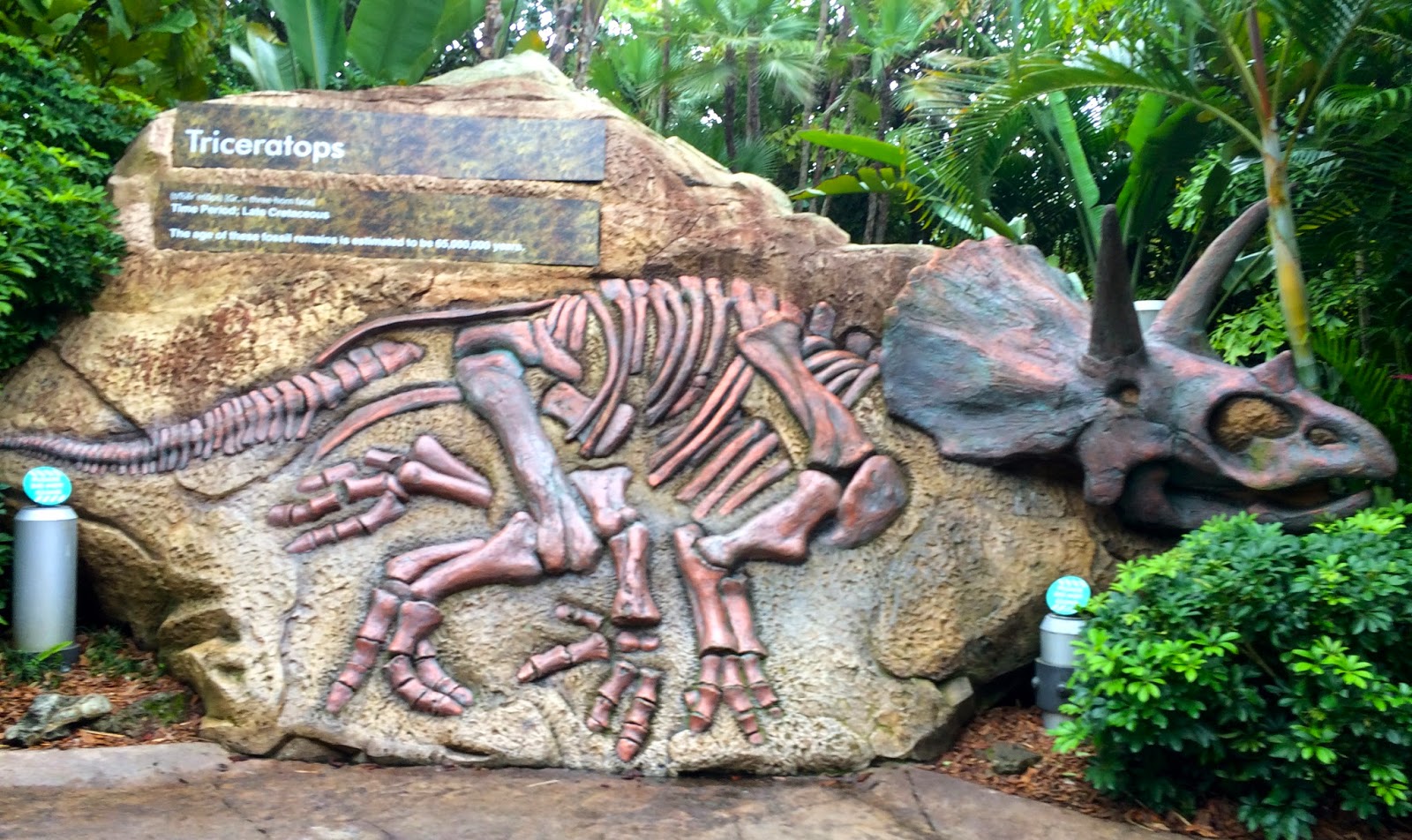 And most importantly, you can become a wizard and hang out in all of Harry Potter’s favorite spots. We started the best part of this day venturing into Hogsmeade. 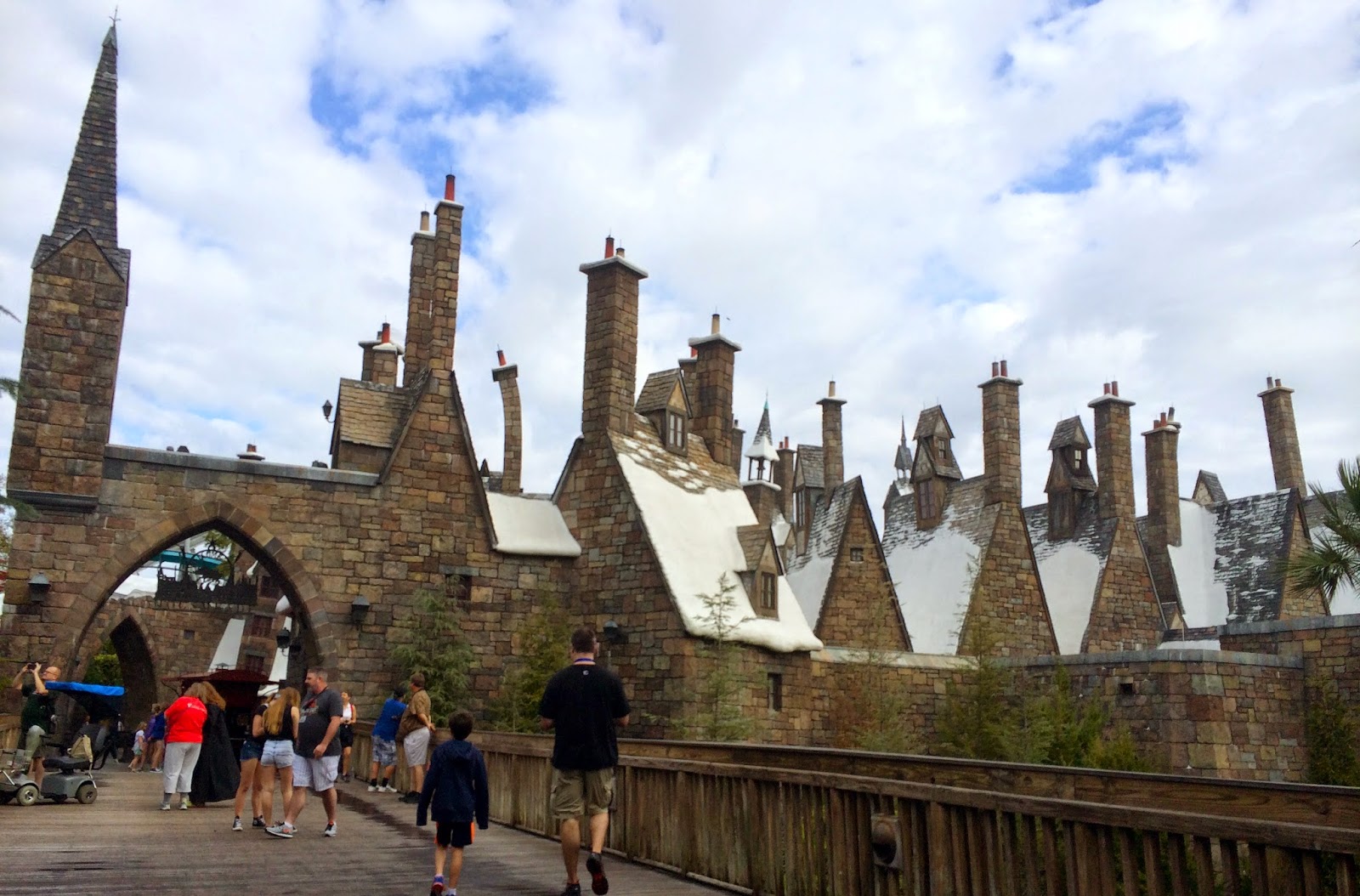 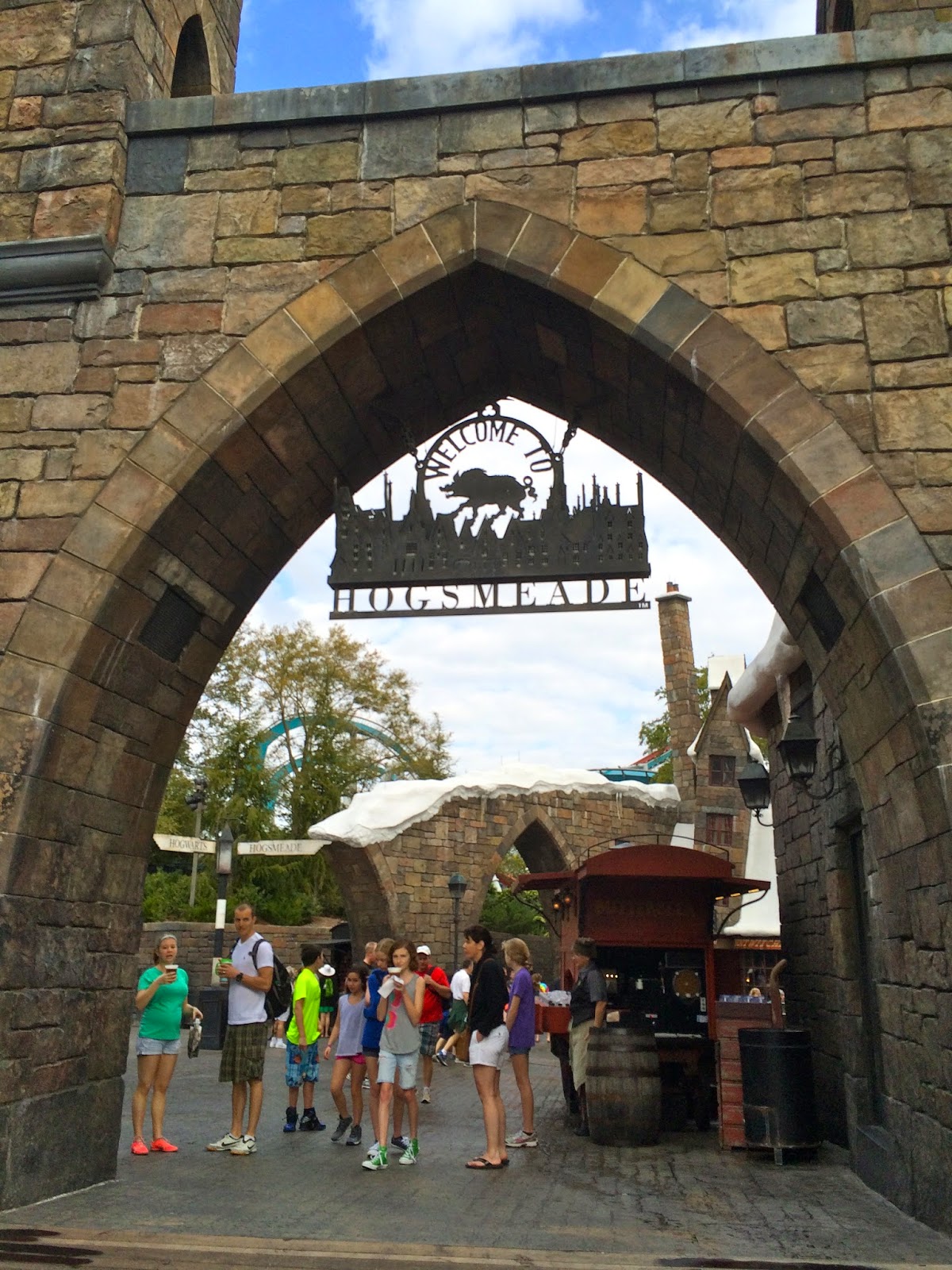 We headed straight for Hogwarts to hop on some brooms and help Harry, Ron and Hermione save the day. Between my bum ankle and my growing belly {it’s a leg dangling and jerky ride}, I decided to opt out and hit up the baby swap room. They were playing the first HP movie in there so I was able to watch while the girls rode. They decided to do single rider so it practically took no time at all! 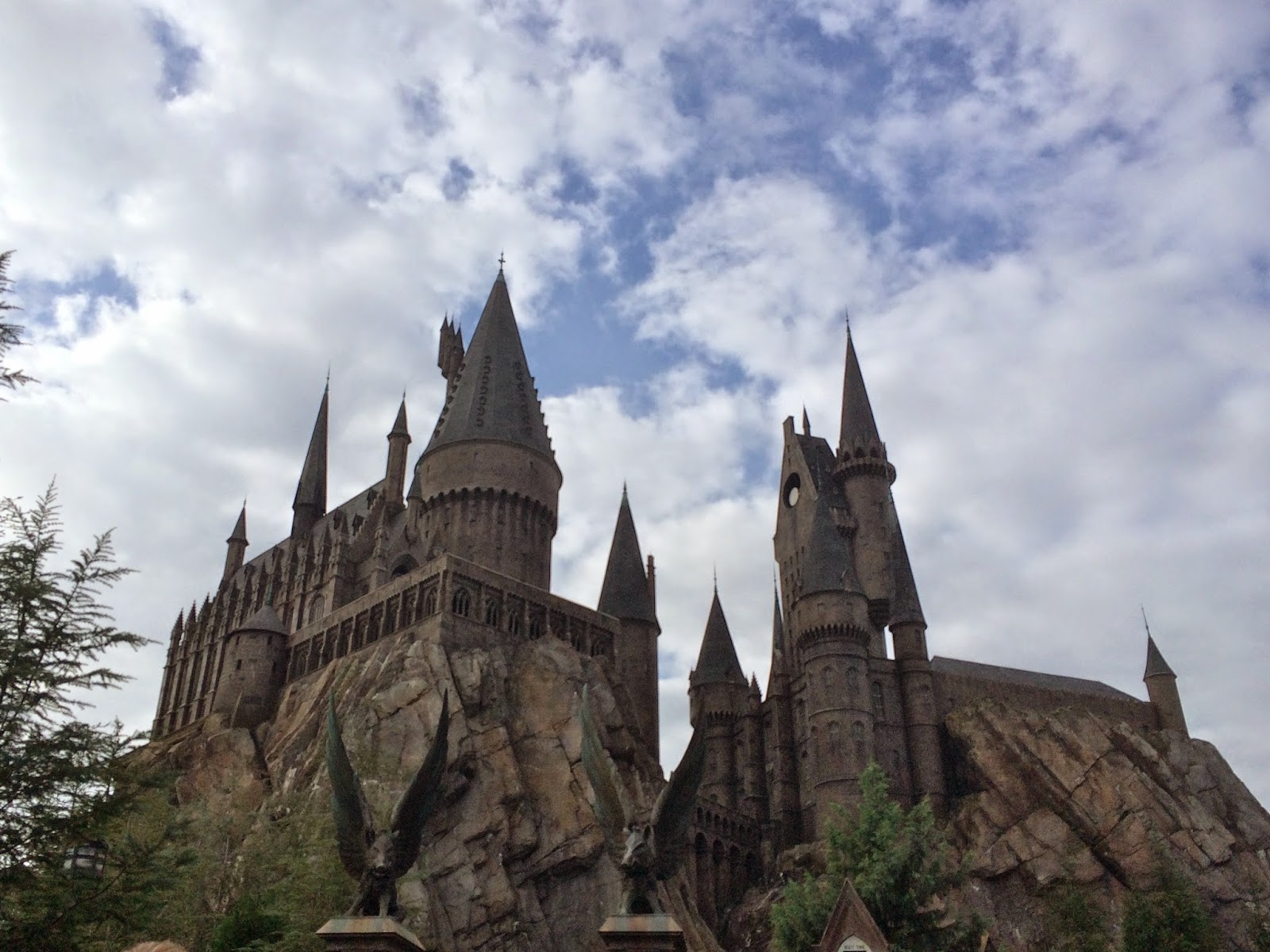 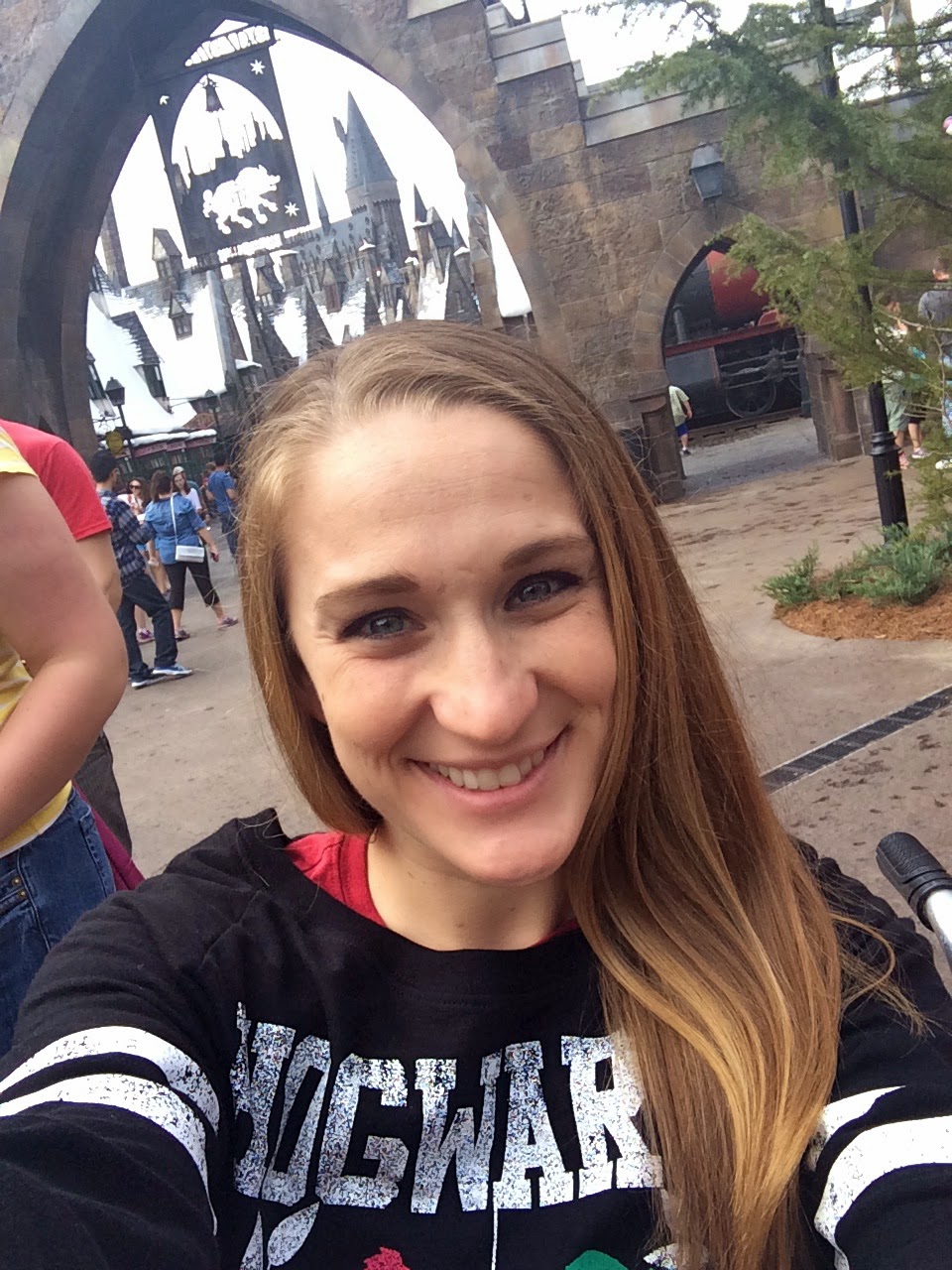 Then we went to go meet Buckbeak and ride the Flight of the Hippogriff! It was a pregnancy friendly mini-coaster for kids which was perfect for Ali and me! Julie and Ashley decided to duel some dragons {another roller coaster} next while Ali and I waited with the owls in the owlry! 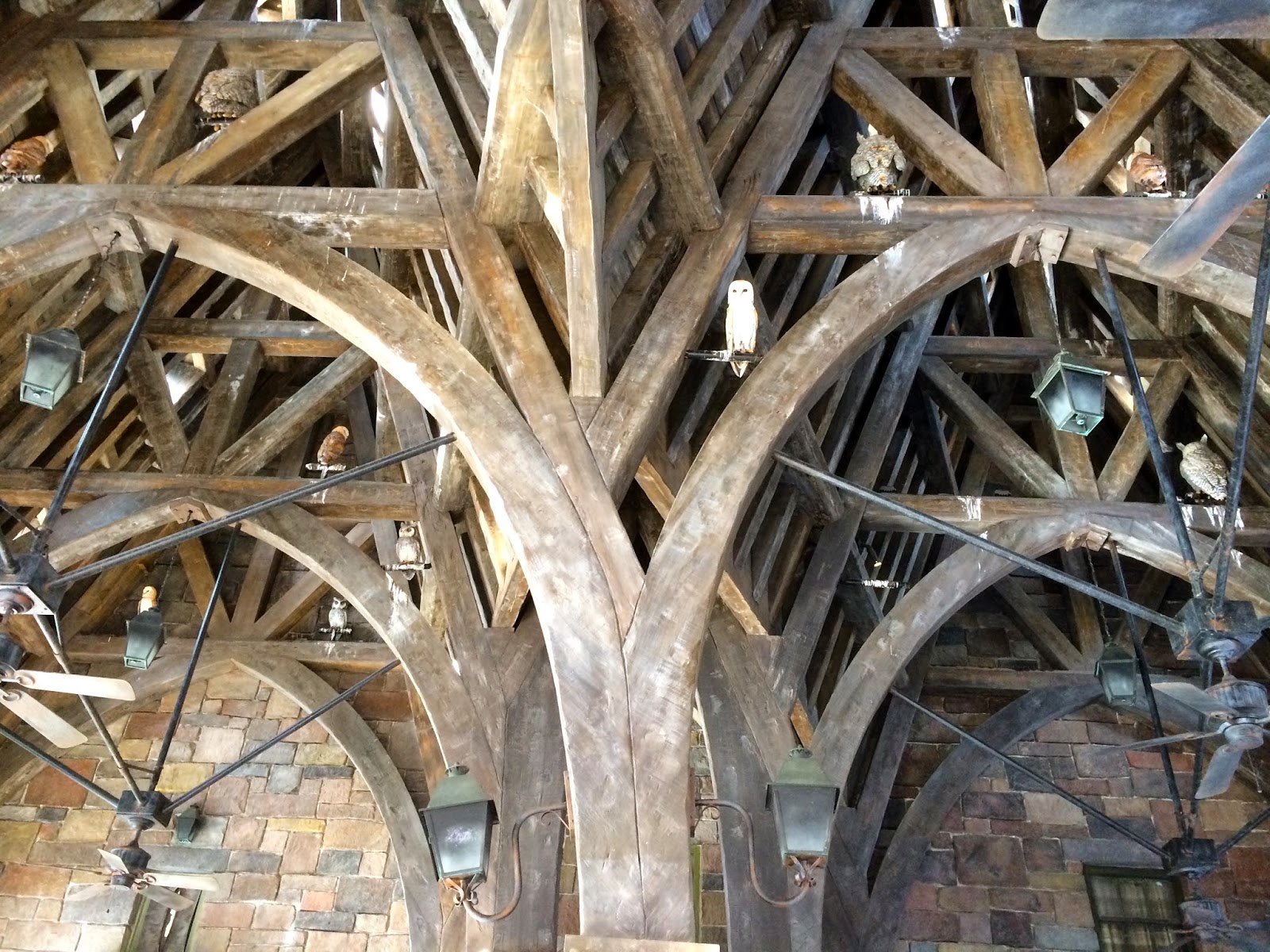 Since we had been to Hogsmeade several times, we didn’t stay for long. Just long enough to ride the best rides and see the best shops. It was time for our first ride on the Hogwarts Express to take us to London! 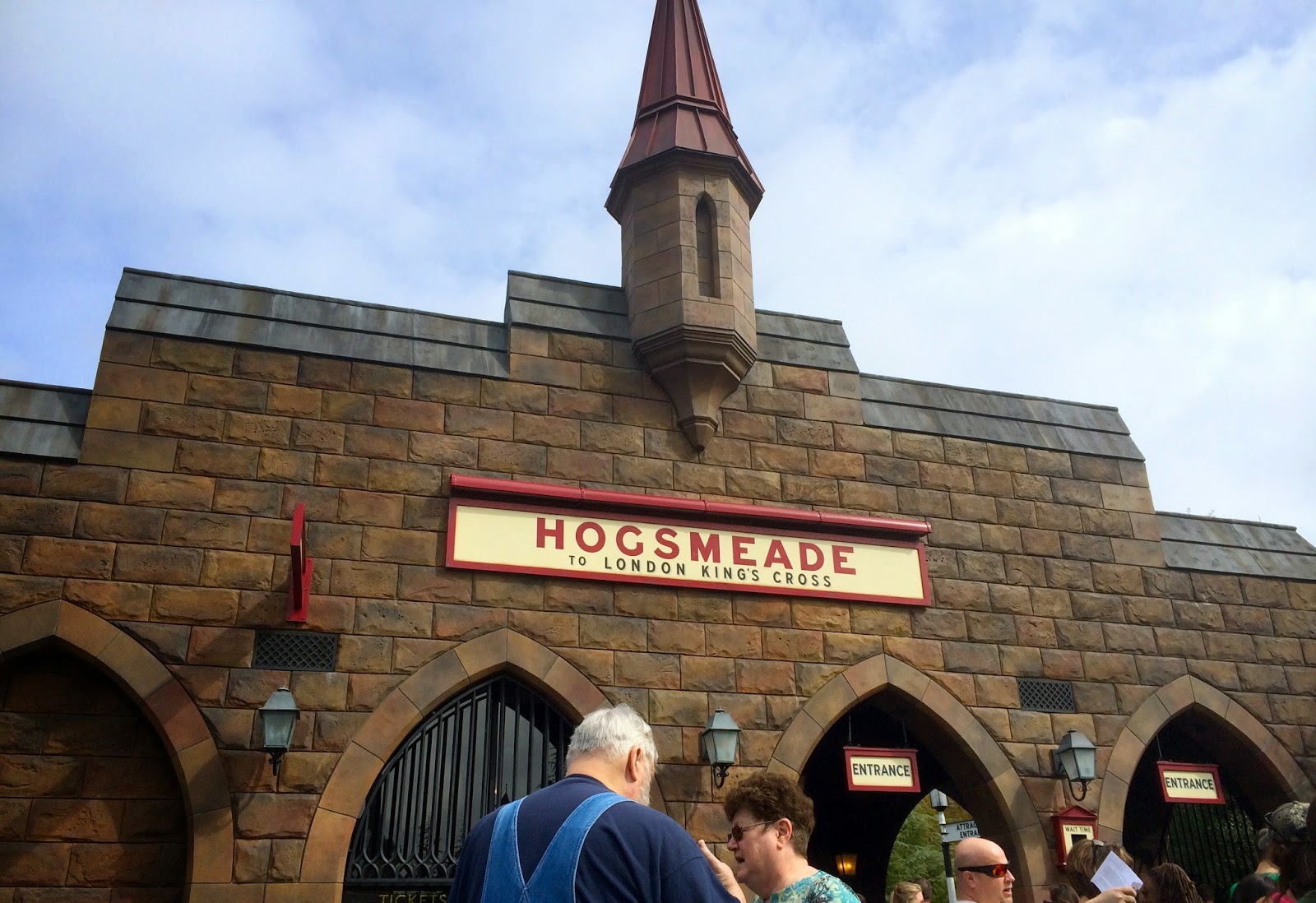 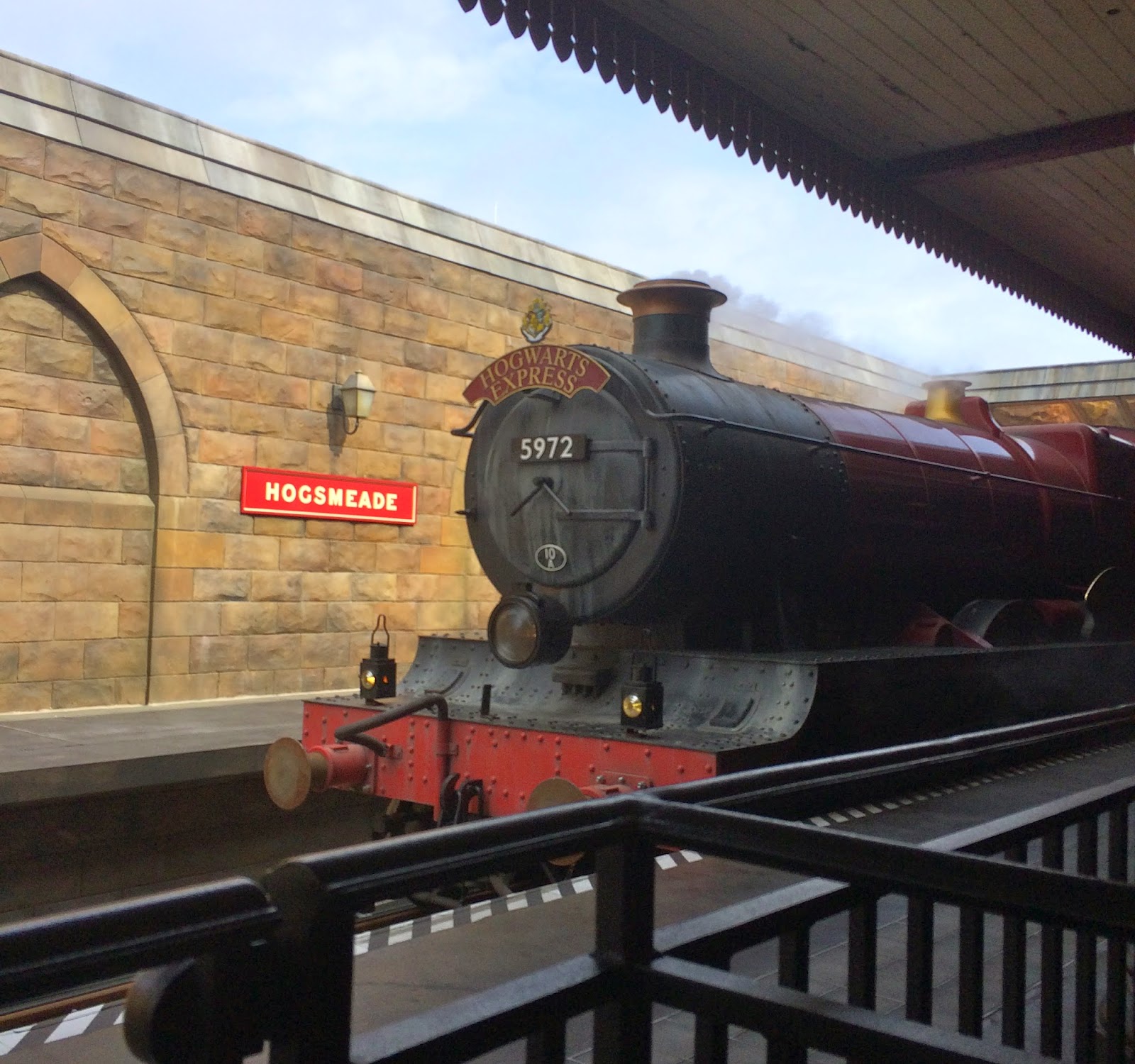 After a brief journey, we arrived at Platform 9 3/4 and ventured out into the London air! 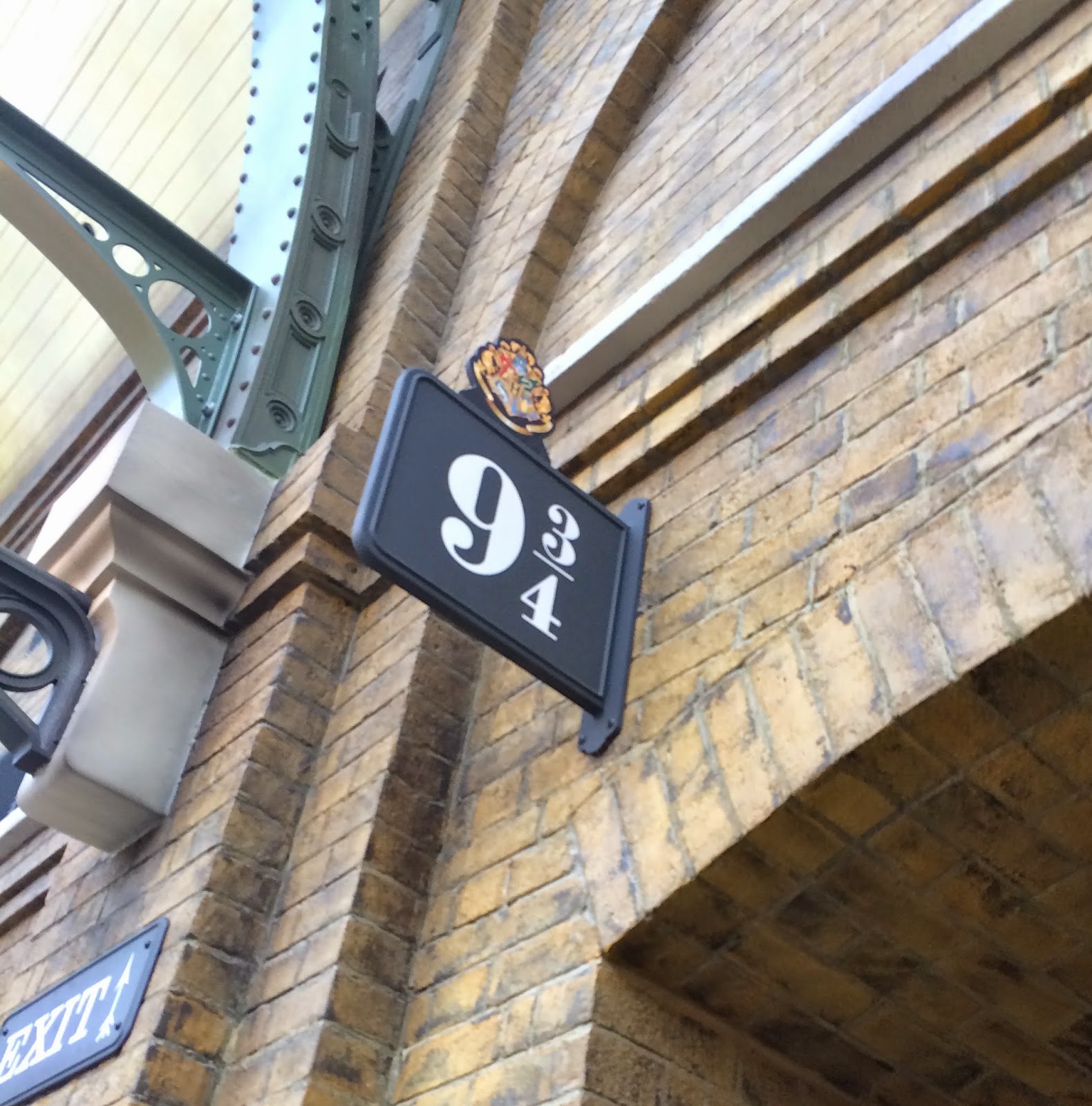 We saw the Knight Bus and knew we couldn’t be far from Diagon Alley! 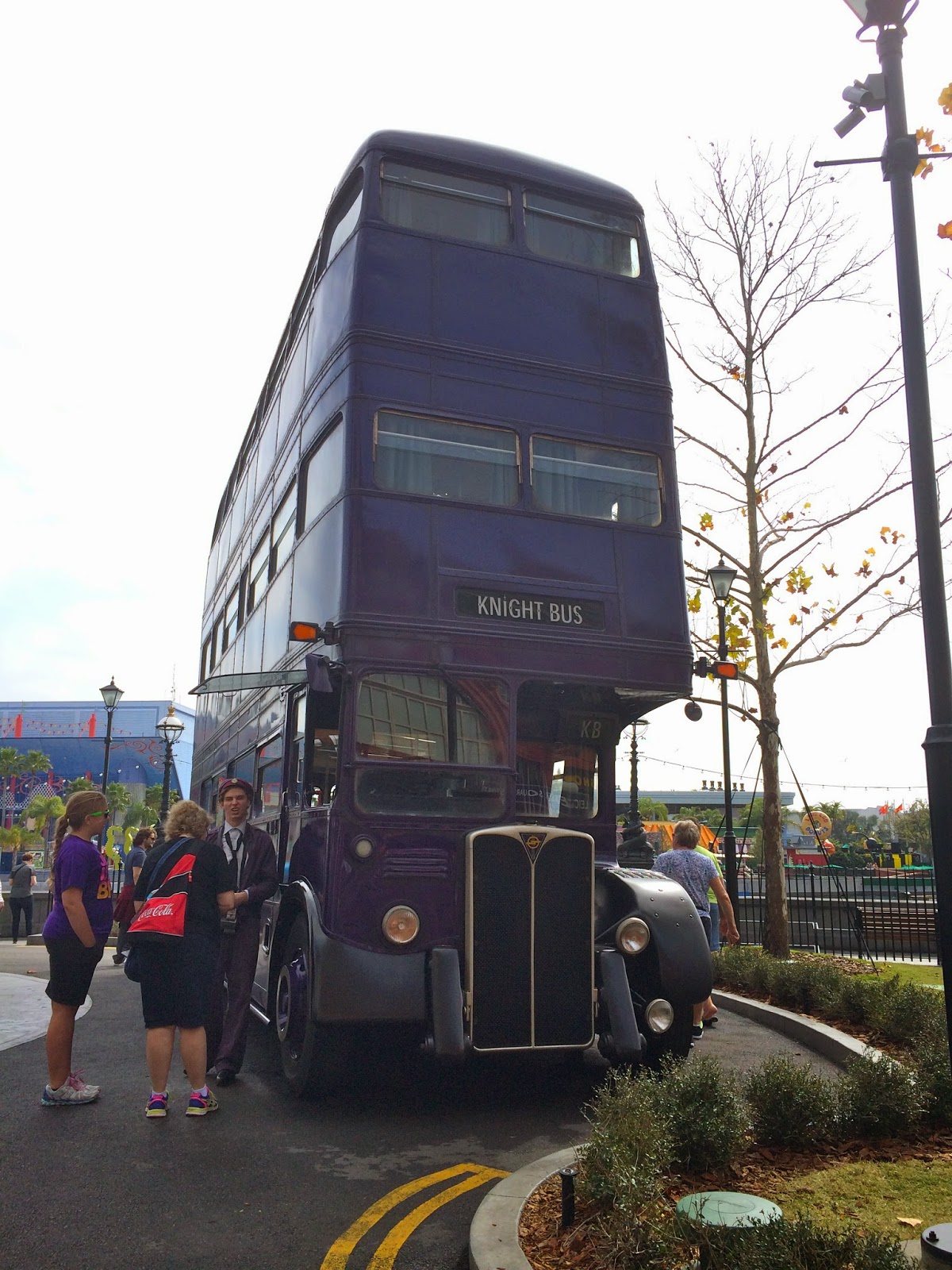 After a few taps of the right bricks, we made it! 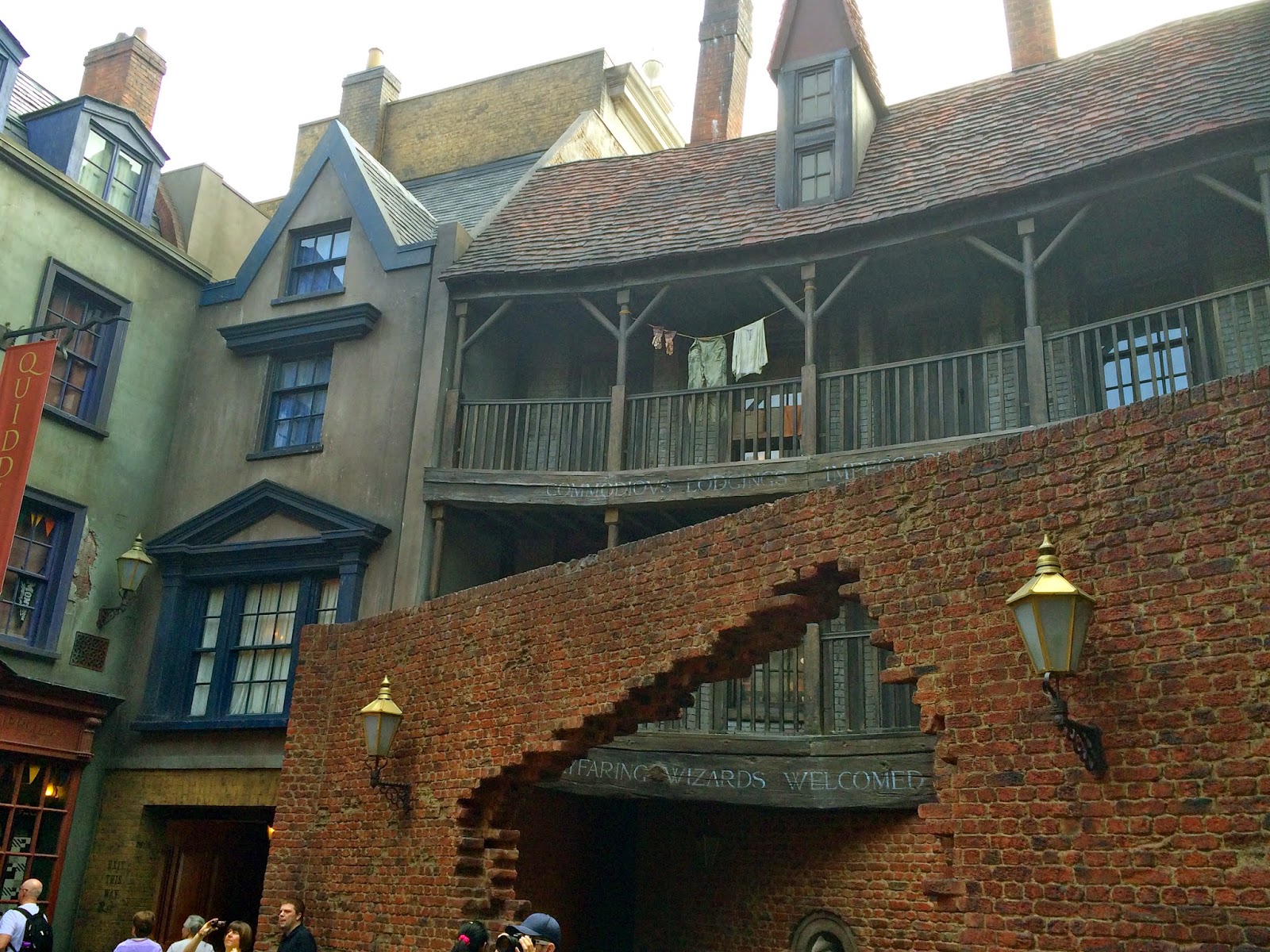 We went straight to Weasley’s Wizarding Wheezes to check out the latest and greatest pranks from Fred and George. 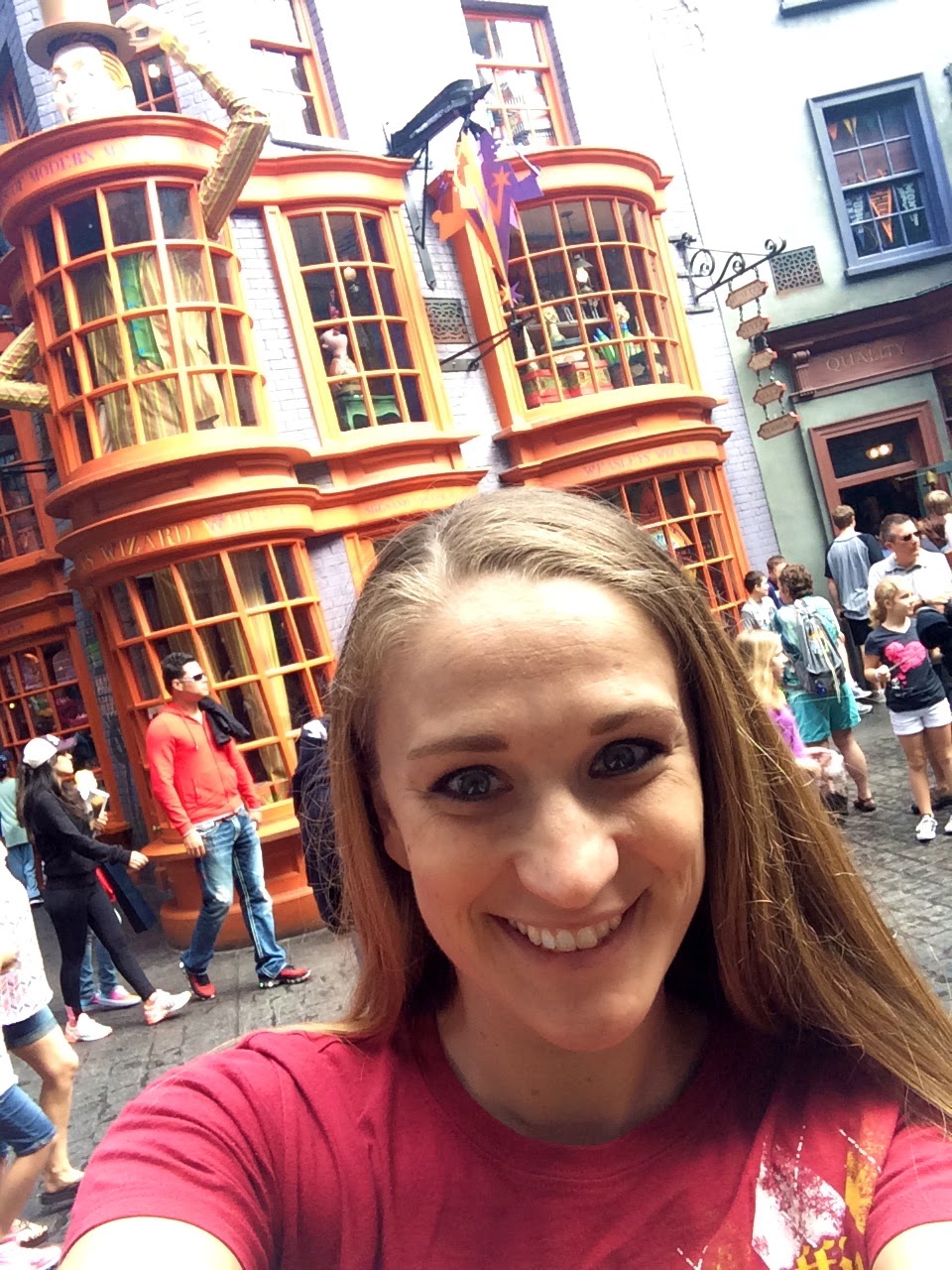 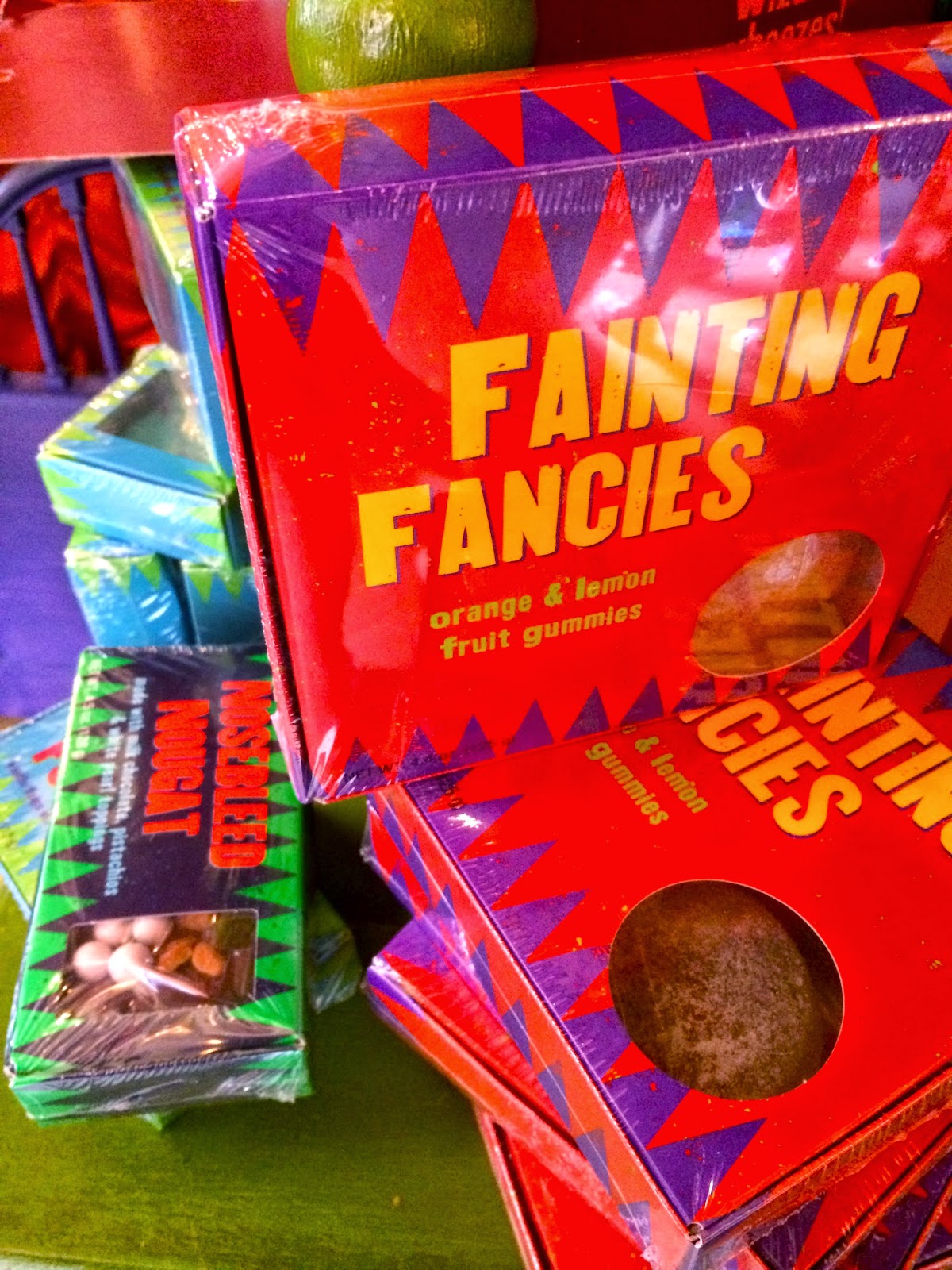 Julie even had her wand ready to perform spells at all of the magical stops. It’s such a cool concept. What Muggle doesn’t want to be able to perform magic? 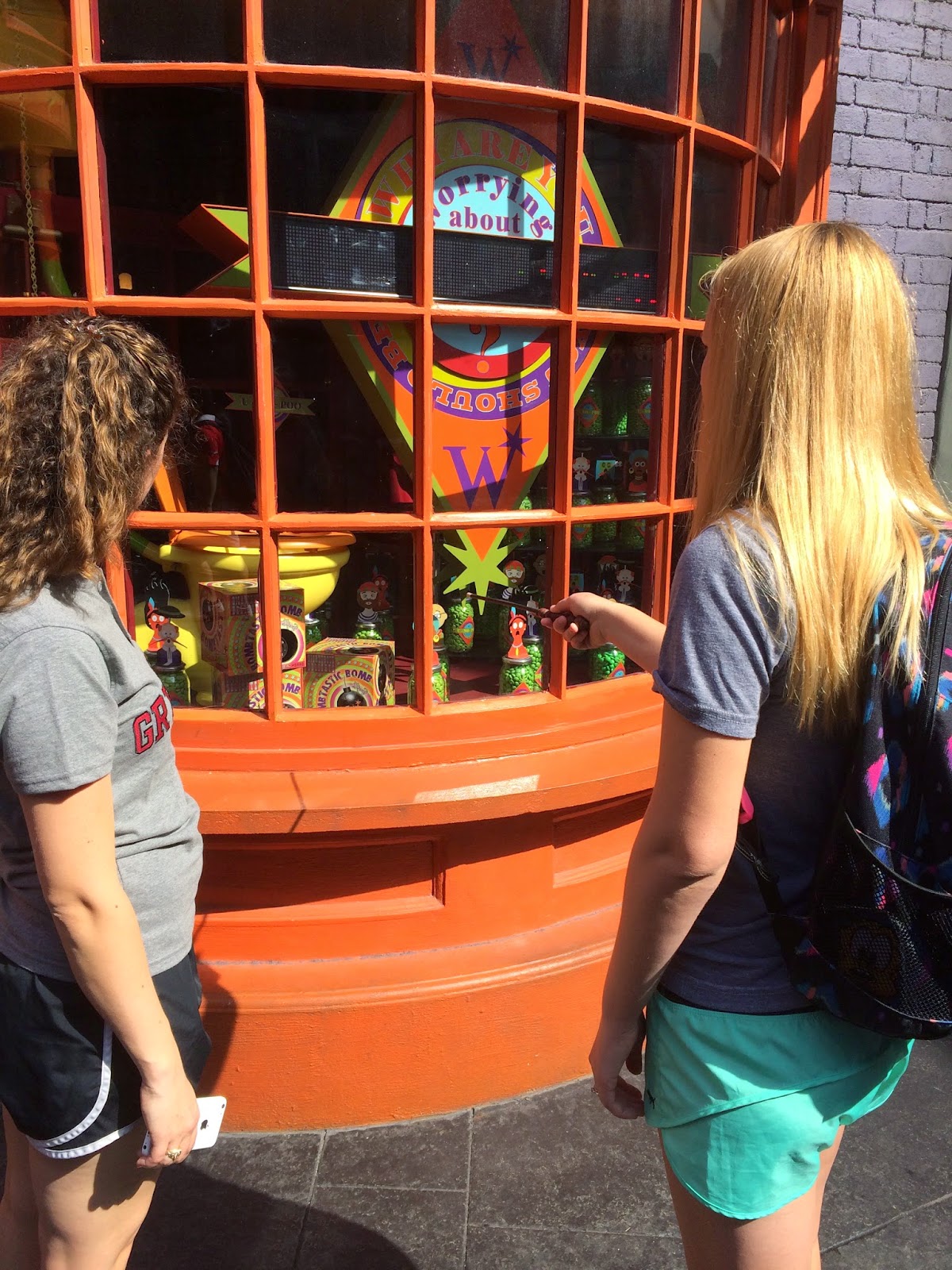 After all of our morning travels, it was time for a quick pit stop for some energy in the form of frozen butterbeer of course. Hello delicious. Since we were enjoying our treats, we thought we’d walk around the shops and see what Diagon Alley had to offer!
﻿
﻿ 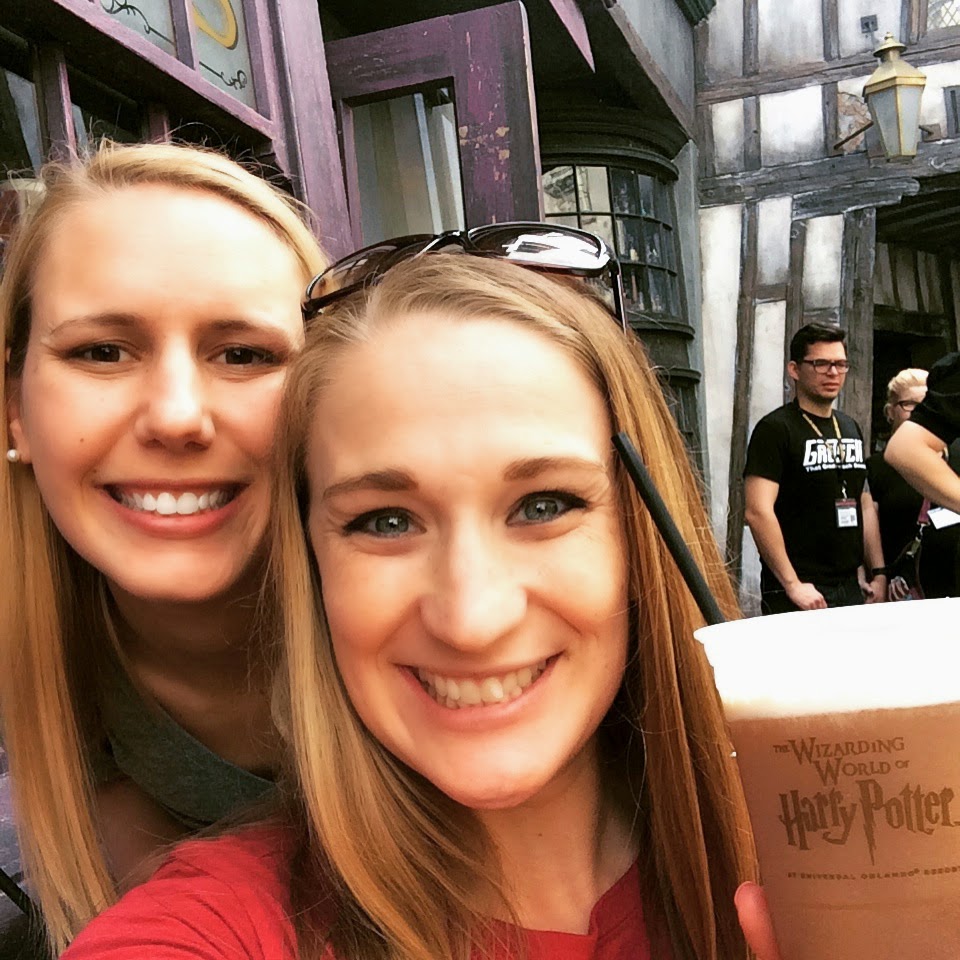 However, one wrong turn took us down the dark and mysterious Knockturn Alley. We stumbled upon the dark magic store Borgin and Burkes and couldn’t resist the temptation to go in and scope it out.
‘ 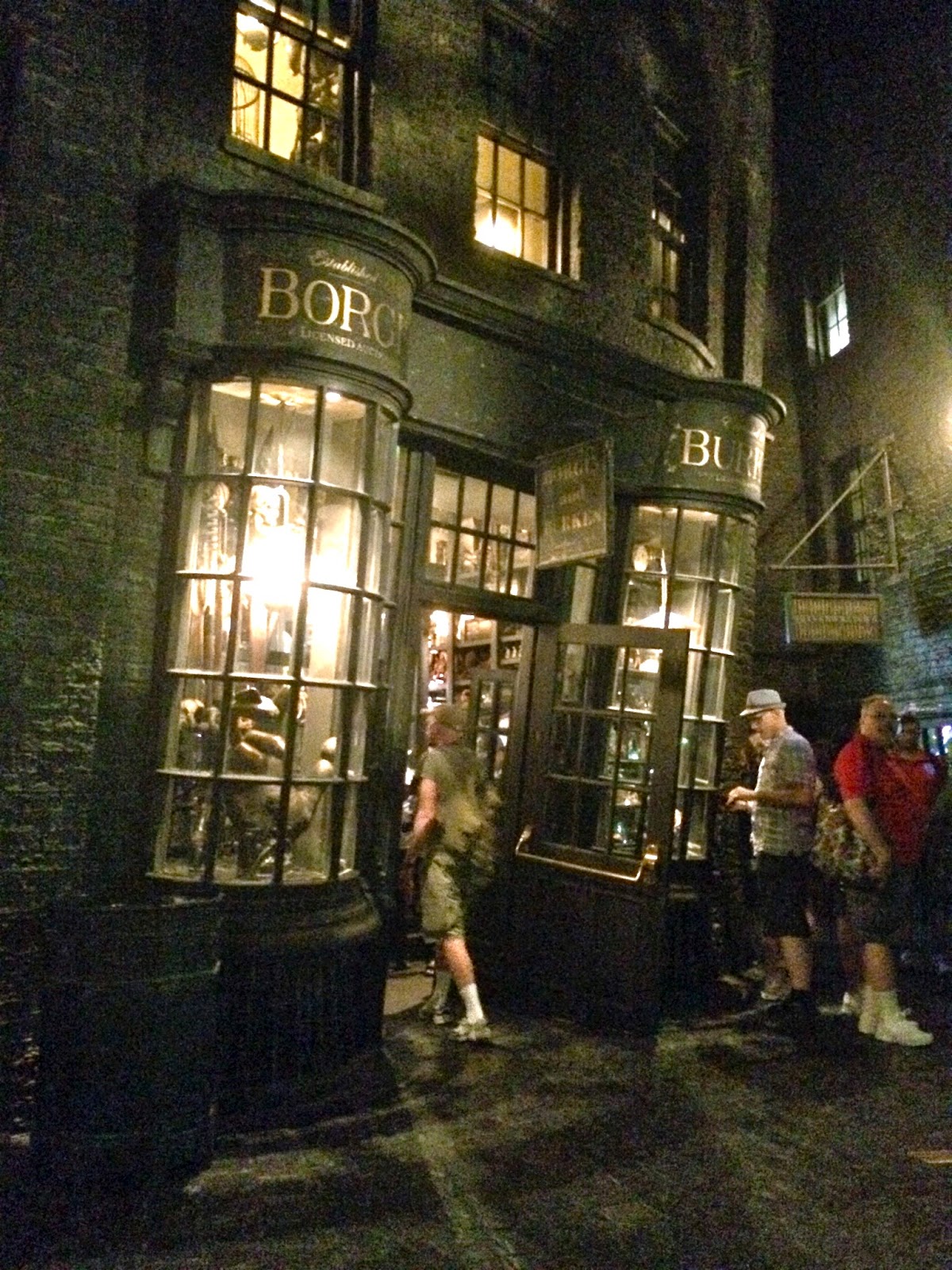 There were dark artifacts all around including a vanishing cabinet that dark wizards used to sneak around from one place to another without being detected. It’s pretty serious stuff. We snapped a picture, but kept our distance since we’re good muggles wizards. 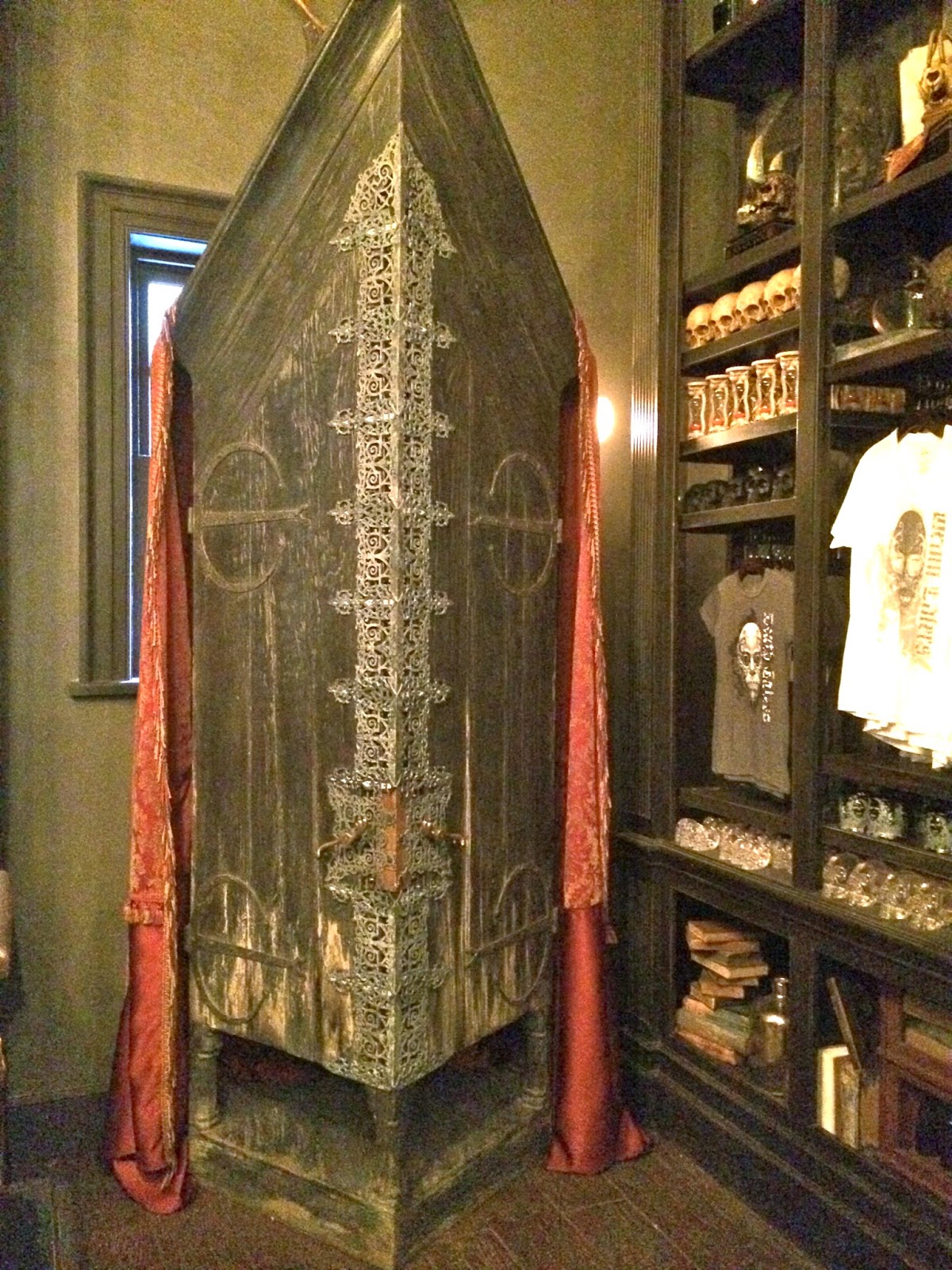 We gathered our wits and rushed out of the dark and dangerous street back to the hustle and bustle of Diagon Alley, and decided it was time to head into Gringotts Wizarding Bank. 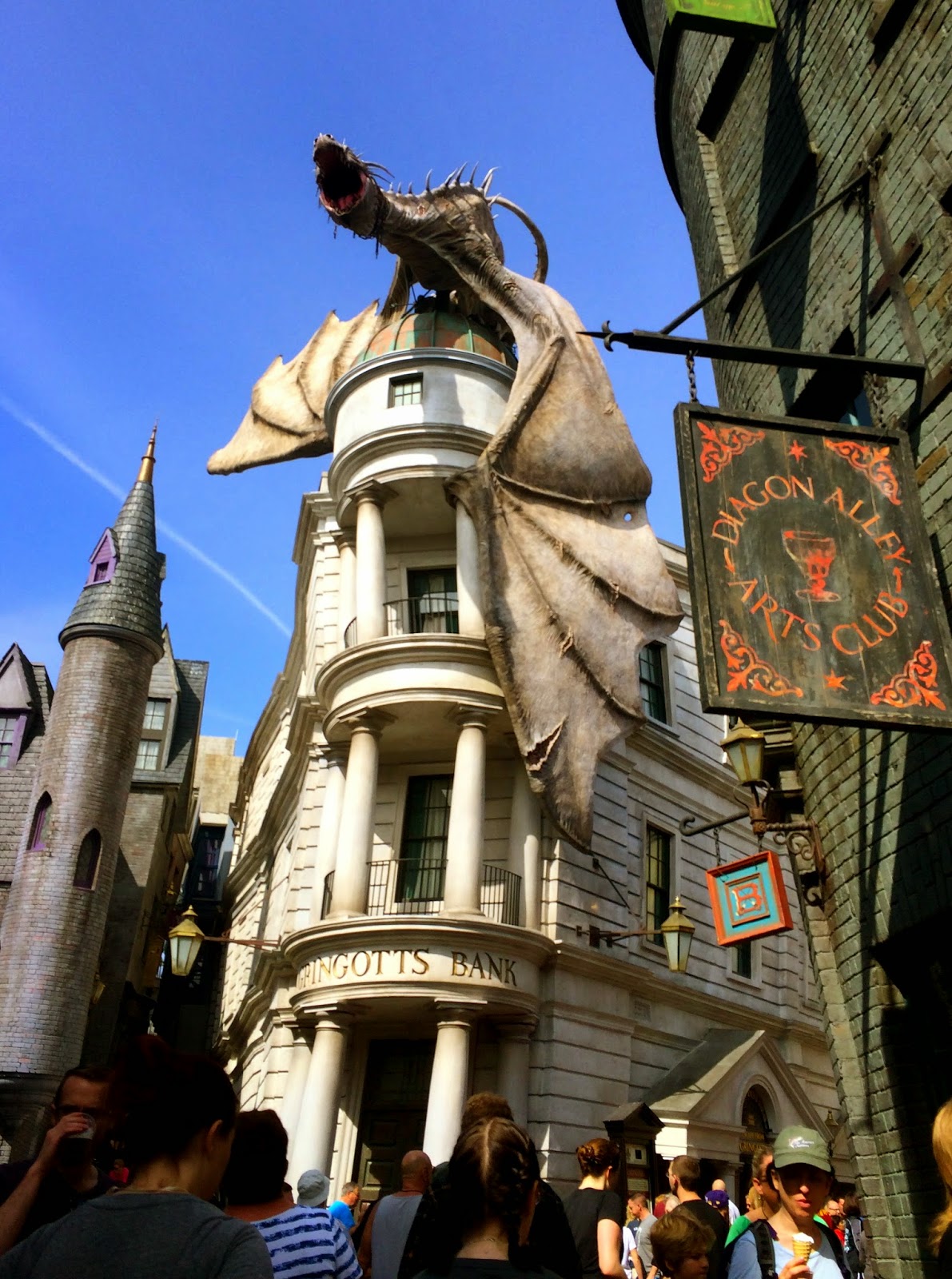 It was a little shaky looking on the outside, but the inside was decorated beautifully. Since I was being rolled around in a wheelchair due to my ankle injury, we were able to skip the 90 minute wait thanks to a fine young gentleman who sent us through the fast pass lane. Score one for the boot and wheelchair! 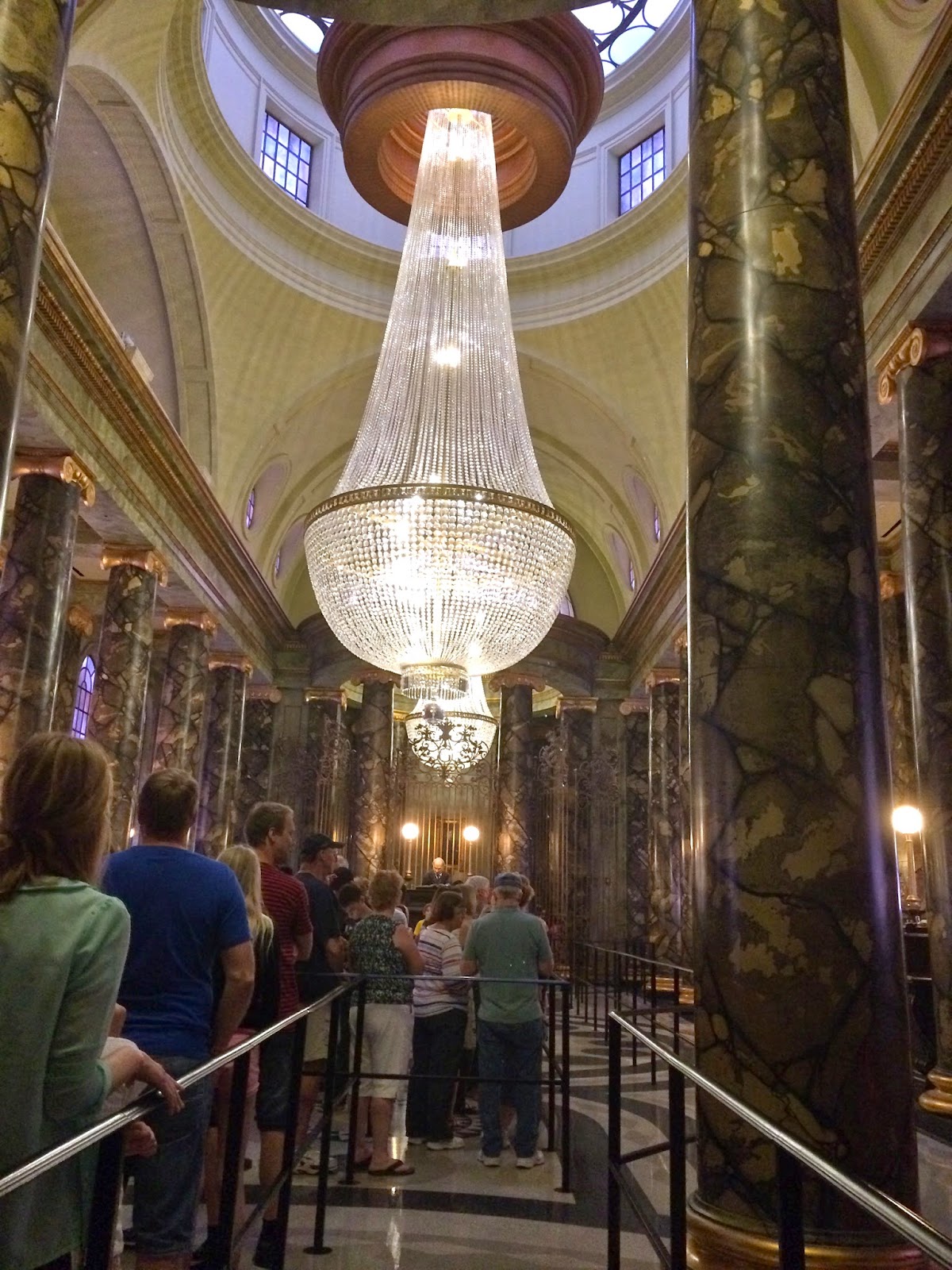 Goblins make sure that Gringotts runs smoothly from day to day, so we were able to see them at work! Be careful with goblins though. They’re sneaky little creatures and don’t follow the same laws as wizards. Never make a deal with a goblin that you can’t keep. 😉 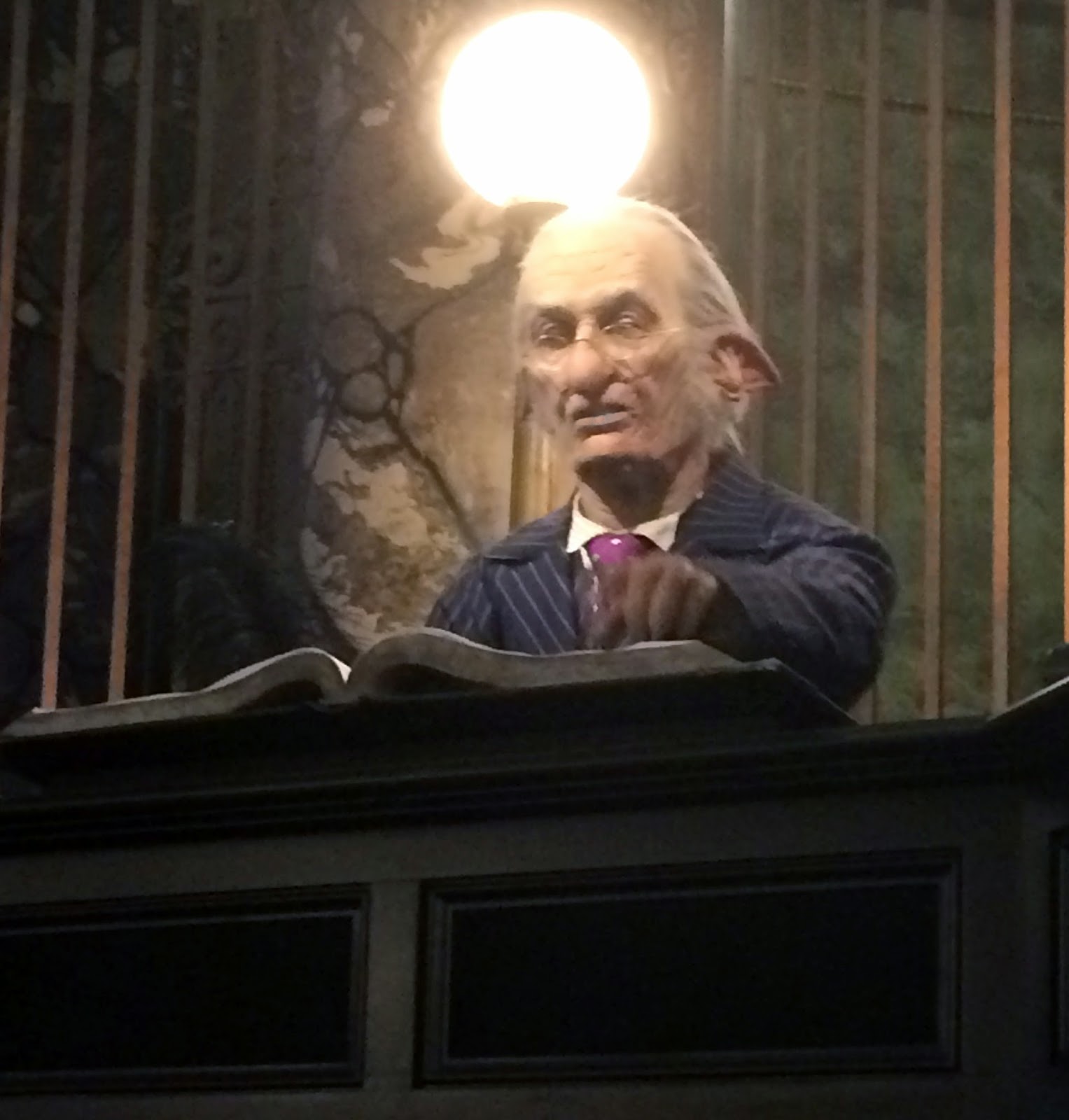 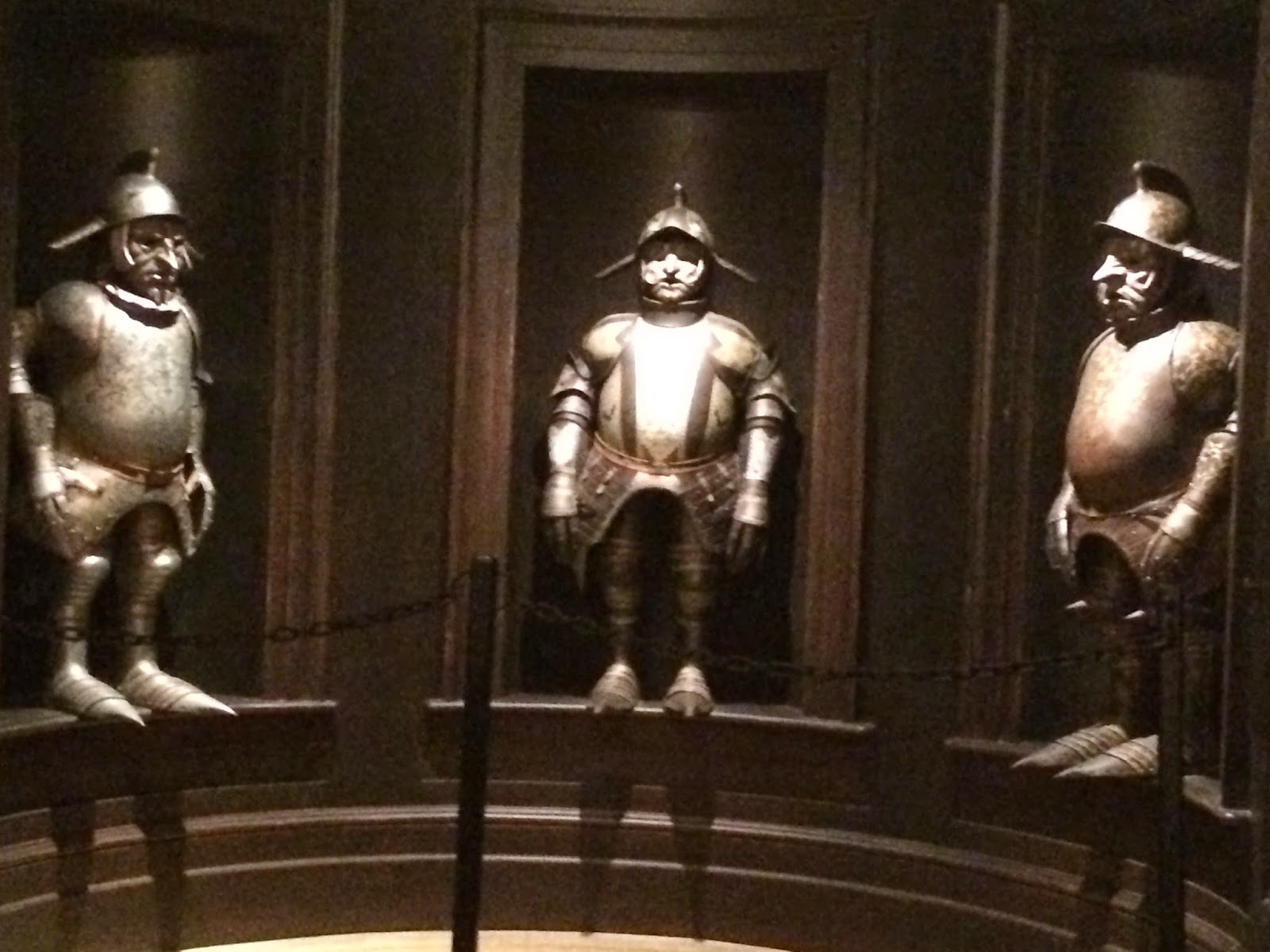 We were able to ride down into the vaults far deep beneath Gringotts just to find out that Harry, Hermione and Ron were there on a mission. The dragon had escaped and we had to help get everyone out to safety. No worries though. Everyone returned with all body party in tact.

Unfortunately a combination of too much sugar from butterbeer and riding the cart in Gringotts had this pregnant lady feeling quite sick. My stomach had been starting to get out of whack the past few days and it really hit me hard after the ride. It got to the point where I was miserable. We decided to leave Diagon Alley and head back to London for some lunch and additional adventures.

Outside of the Wizarding World of Harry Potter is a land of excitement with of neat rides featuring different pictures from Universal Studios. There are a lot of roller coaster and jerky rides that I needed to refrain from for so many different reasons. Luckily it gave me time to rest and let my stomach try to settle. 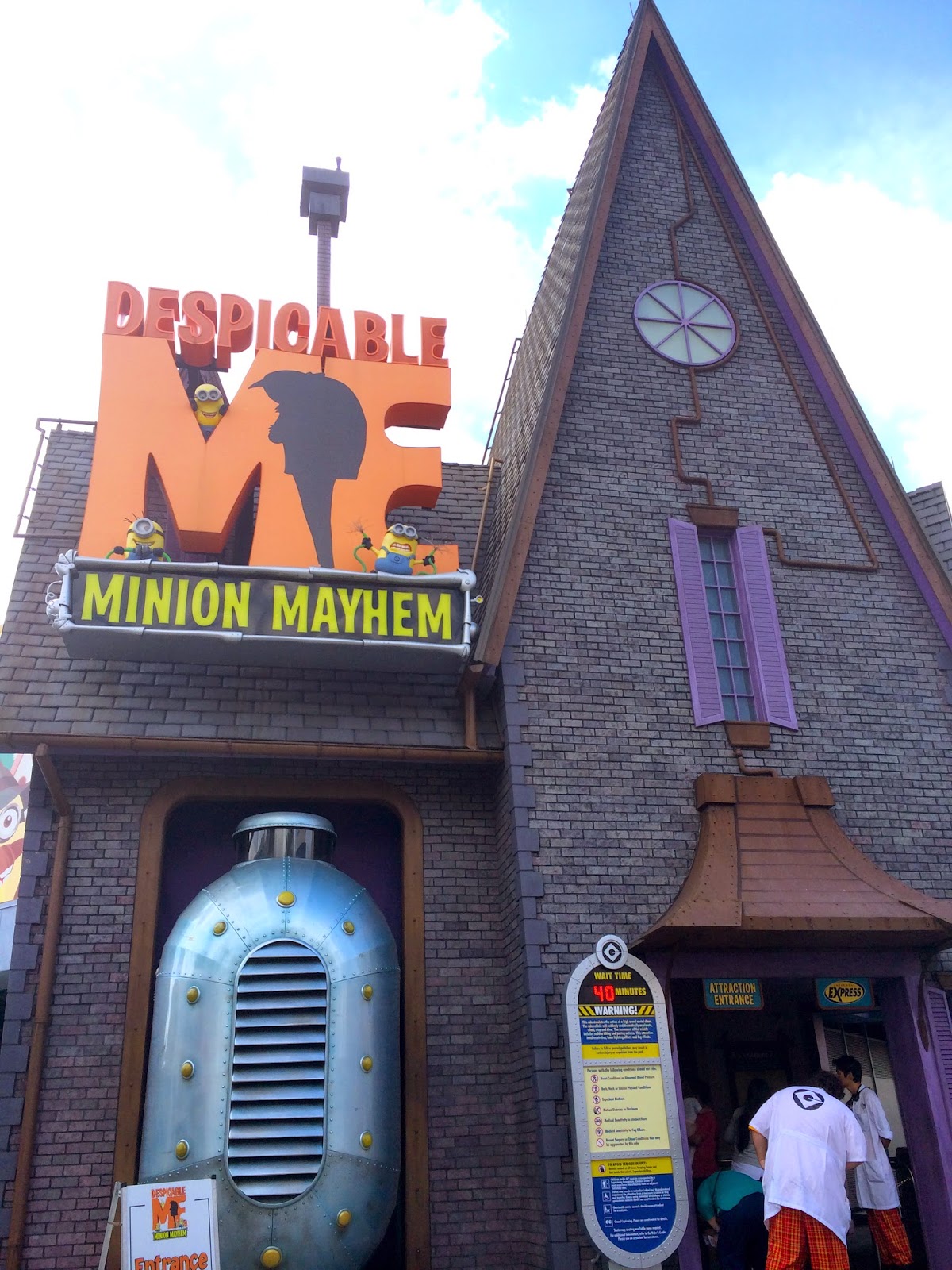 I couldn’t resist going on the Despicable Me ride though! There were non-moving seats that I was able to partake in. I had to keep my eyes shut for most of it though because the 3D bit was crazy and it make me quite nauseous.

After a few more rides, including Shrek and some roller coasters that Ali and I skipped out on, the girls went on a Revenge of the Mummy ride while I enjoyed an excellent view of the parade from my wheelchair. It was awesome that the parade went right by us, but that also meant that after the ride, we were kind of stuck. It took us a little while to dodge and weave with the wheelchair to get out of there! 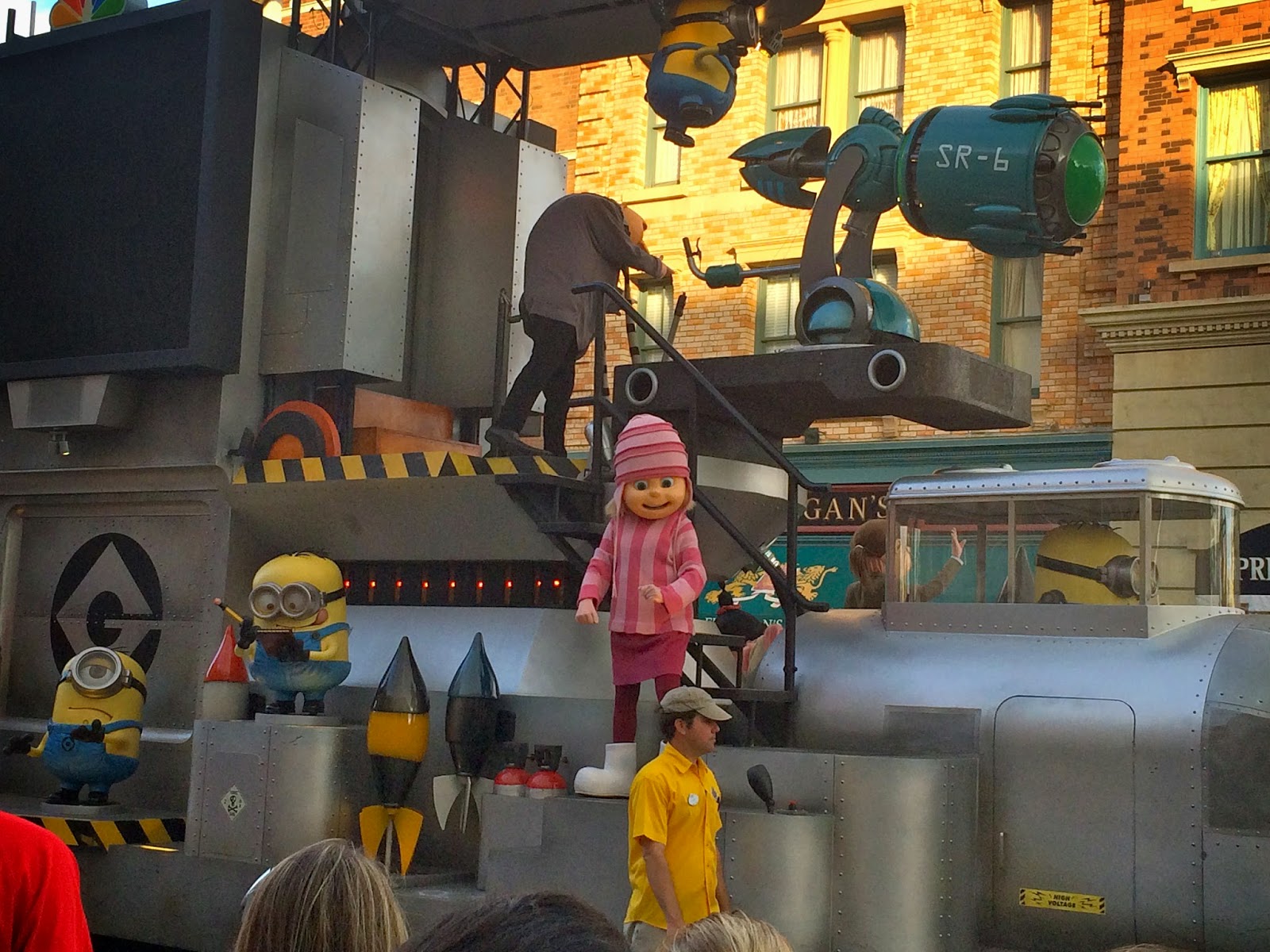 It was about time to finish out the day, so we watched a horror production show and went on the awesome Men in Black shooting ride. We finished out our day wandering around the streets and shops of Diagon Alley before heading to the train station to take us back to Hogsmeade on the Hogwarts Express. We even disappeared right through the Platform 9 3/4 entrance without a single muggle noticing us! 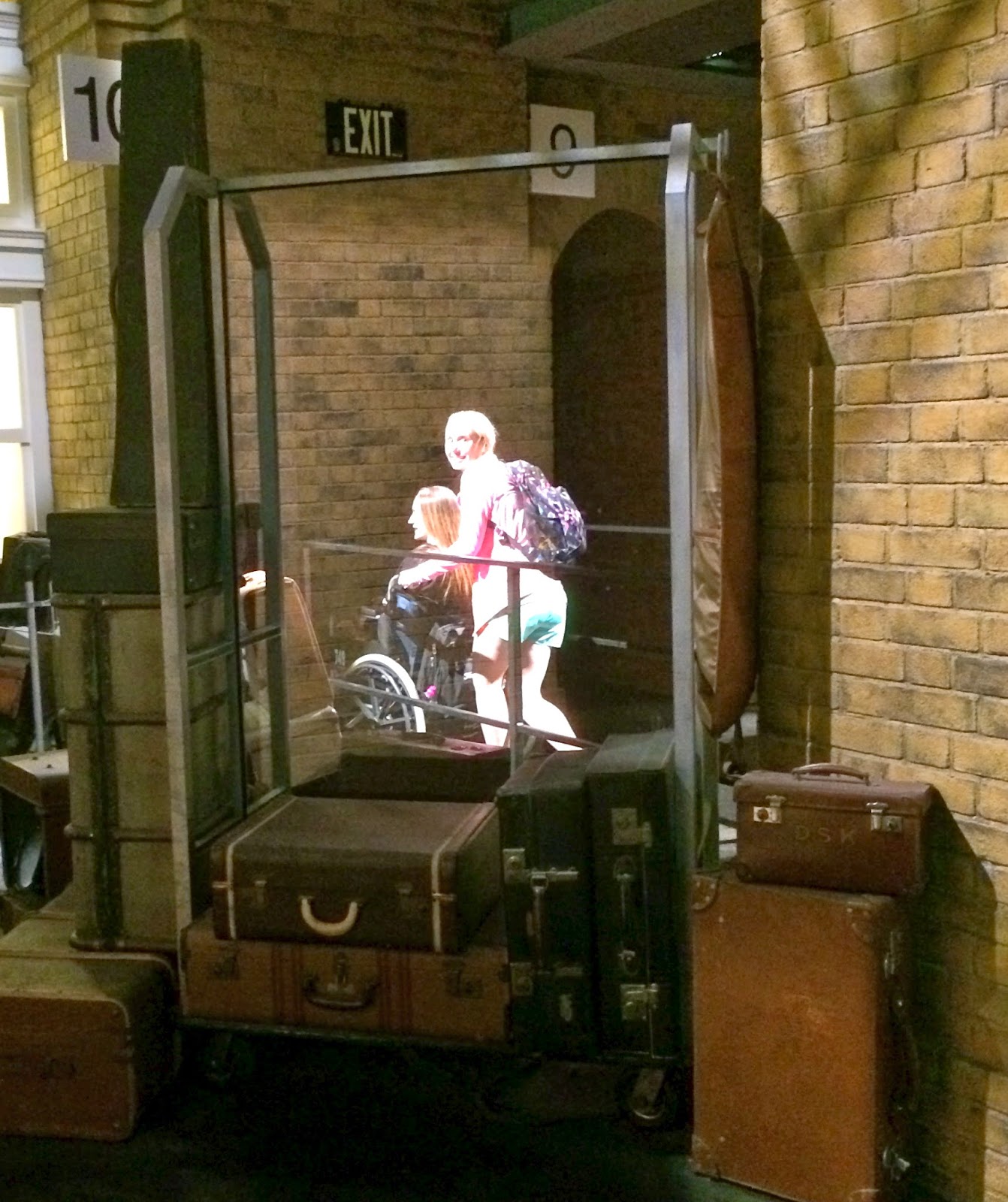 Overall it was an absolutely wonderful day full of so much adventure. My stomach eventually settled, but I was in a significant amount of pain for several hours. I tried not to let it get me down and I hope I didn’t put a damper on the girls’ day! Oh and side note: the rides on the Hogwarts Express are different each way so I suggest riding both ways if you get a chance to go!