As always, it was a total blast. There were parts that I loved and parts that I didn’t love so much. Let’s relive it shall we?

The morning started dark and early with a 5:30am wake up call. My costume was laid out and wait to conquer this race. Costume…what? Yes, you read that right, costume. Chandra, JP and I decided to dress up as the Incredibles! Chandra got to the house just before 6:15am and we were on our way. The race info said to get to the race an hour before. Clearly we didn’t do that since it was a 7:00am start time. Luckily, we were only 2 miles away because parking in the garage was quite the ordeal. We were finally able to get in the garage and on our way to the race start after waiting in line for about 15-20 minutes.

The race is just a quick walk from the garage and was a nice little warm up and a way to acclimate to the weather. Sunday morning was pretty nice considering the fact that we were in Houston. It was about 60 degrees, but 100% humidity and boy did you feel the humidity…as always. 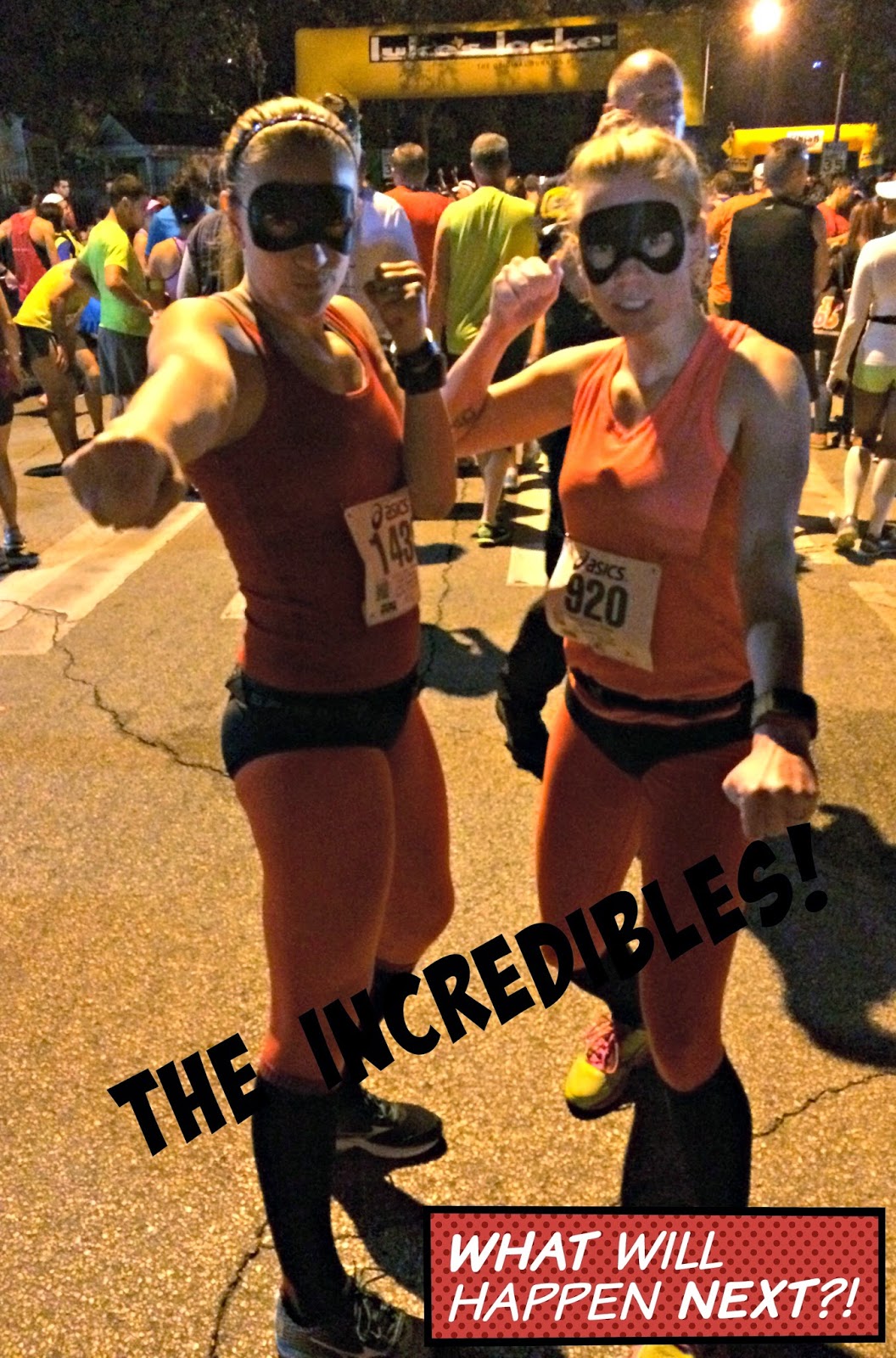 We arrived at the race start with about 15 minutes to spare. Since we live close, there wasn’t a need to visit the port-o-potty. Thank goodness because the lines were outrageous. I remember the lines being awful last year. So awful that we didn’t get to go potty before the race and had to stop at the first port-o-potty on the race! It looks like that’s how they were again this year. Definitely something to remember if I decide to run this race again in 2015. 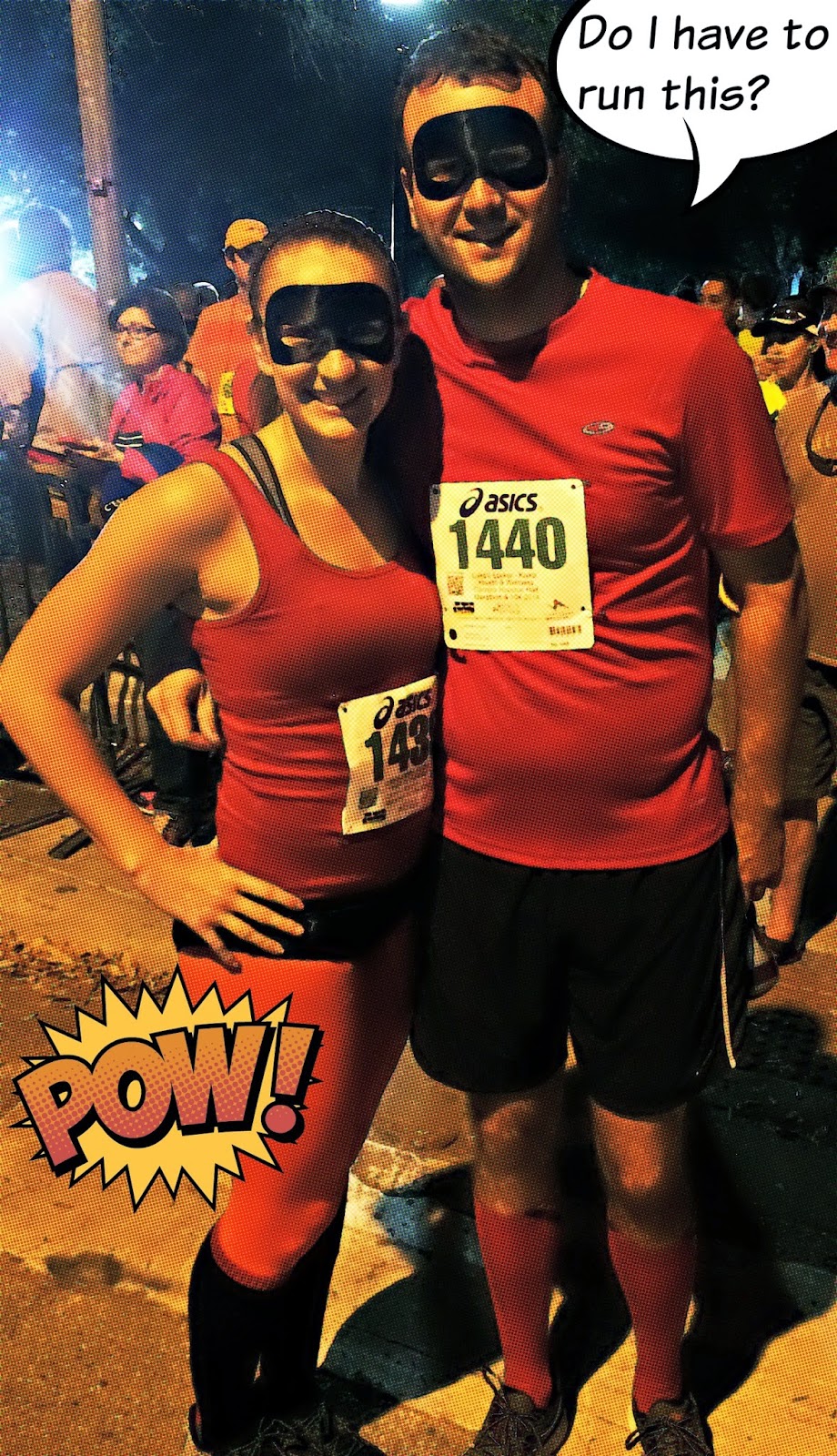 So what do you think of our super hero outfits? We weren’t prepared enough to have The Incredibles logo, but at least we had the masks to hide our secret identities!

We were actually able to procure a spot near the front of the start line. This rarely happens in smaller races that don’t have corralled starts. The start line was a bit chaotic, but after we shuffled back a few times, everyone was on the correct side of the start line and we were ready to race! 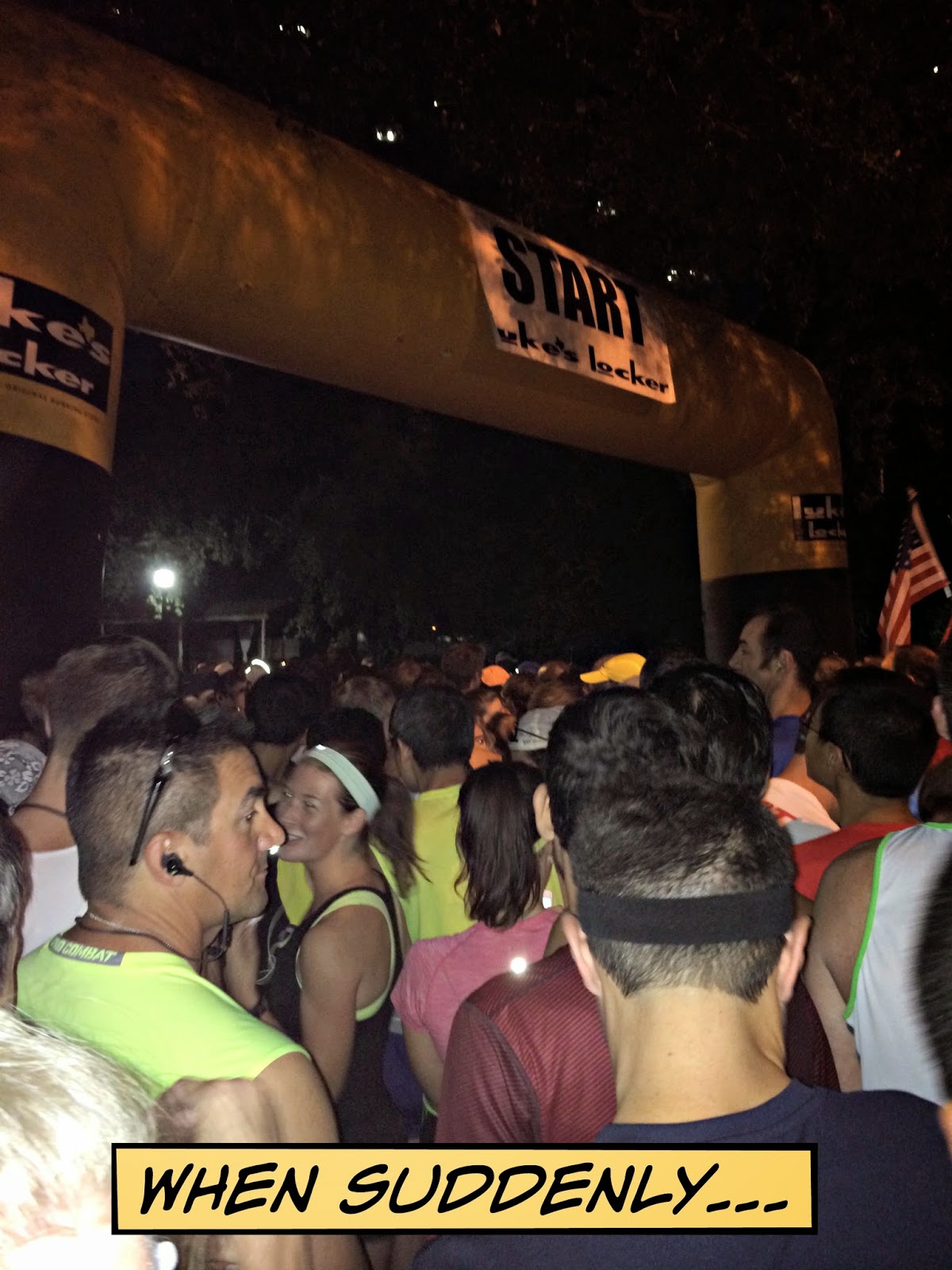 We took off at the start with a pretty solid pace. Being at the front allowed us to miss all the dodging and weaving around people who are slower. We held pretty steady around a 9:00 for the first mile and a half before picking it up and settling into a rhythm.
We did notice, thanks to a girl that couldn’t stop talking about it, that they were missing some of the mile marker signs. This didn’t effect us since we were wearing our running watches, but it did seem to bother some other runners.
The first part of the race is in downtown and then we turn around and headed out down Allen Parkway towards Memorial Park. 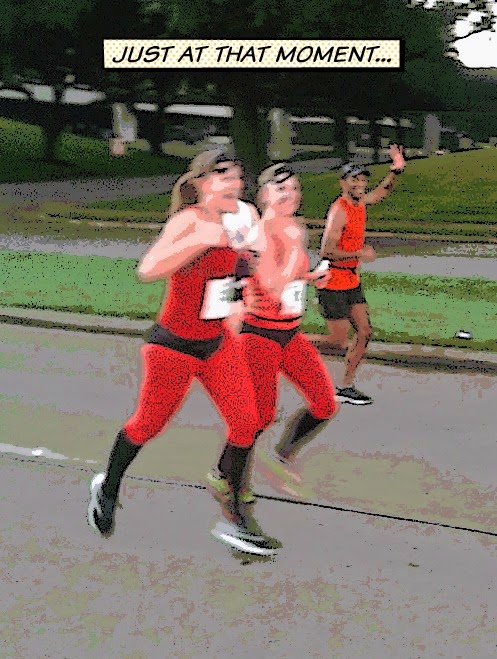 We saw some of our running club friends cheering people on, but with our super costumes, they couldn’t tell it was us! We did get this blurry picture of us speeding by. It must of been our super speed that did that!
By mile 3 we had settled into a pace between 8:30-8:40 minutes/mile. We ventured up and down the man made hills of Allen Parkway, to Memorial drive, went around Memorial Park and right back to the Allen Parkway hills heading back into town. Miles 9-13 were rough because we were running directly into the rising sun. No sunglasses. No hat. Nothing, but bright sun shining directly into our eyes. We survived though.
At mile 10 I sent my speedy partner on her way. She’s a champion and super speed is obviously her super power. I held onto an 8:30 pace for the remainder of the race which felt pretty good to me considering how much the temperature kicked up once the sun came out.
The last few miles were really fun for me. I had tons of spectators cheering me on and commenting on my costume. I got everything from Superwoman to Super Hero to Mrs. Incredible. At least they knew I was a super and I didn’t get confused this morning when putting on my clothes! 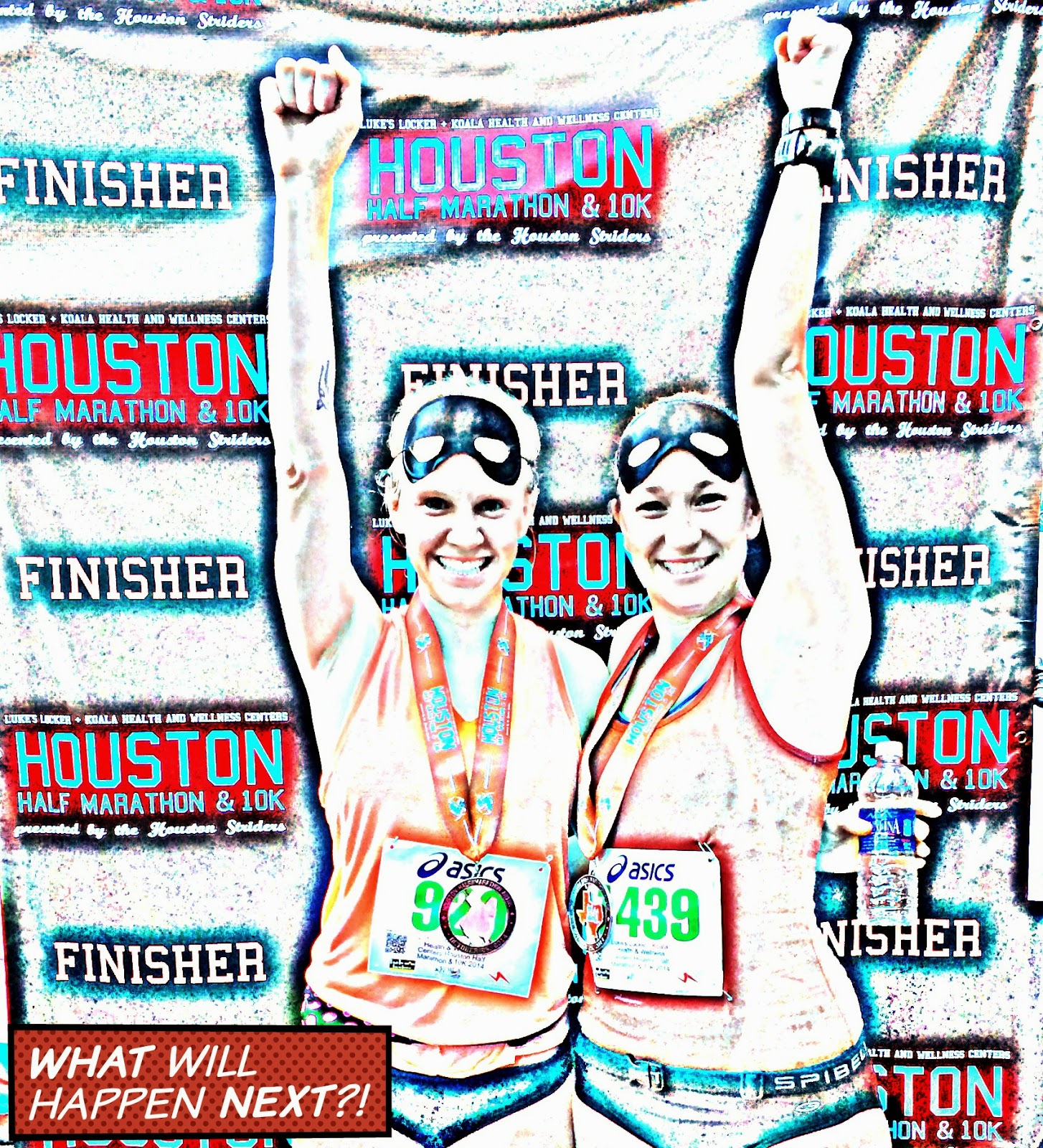 The last mile was pretty rough. This is usually when I start asking myself why I enjoy distance races. Then I remember as soon as I cross the finish line and those silly mile 12 thoughts are all forgotten. I crossed the finish line officially in 1:53:19. Not too shabby for sub-par training and weather conditions! An excellent first race of running season and a great confidence booster for my January goal of a sub-1:50 half! 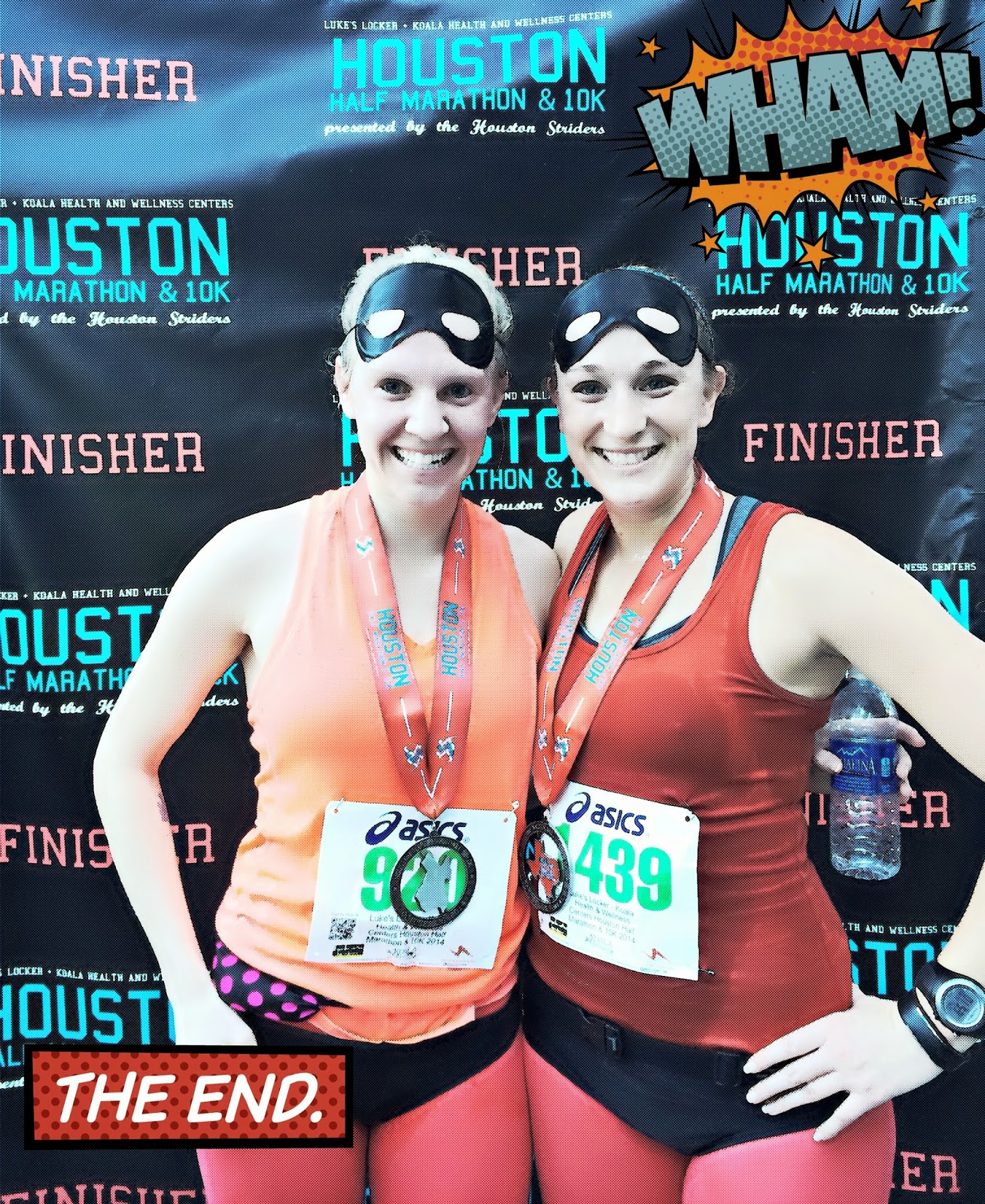 I must say, not only did we kick this race’s butt, we looked pretty good doing it! I’m so very proud of my wonderful husband who also ran the half in 2:05! This wasn’t his best race, but it was his fifth half marathon and he’s signed up for one more in January. After he ran his first half, he said he wasn’t going to run another…clearly the running bug bit him too…just a little less hard then it got me!

I want to give props to the Houston Half for their after race party. There were tons of tents set up with beer, fro-yo, running groups, massages, etc. And the post race food selection was great! Bananas, oranges, bagels, cereal bars, drinks and more. JP focused on the beer while Chandra and I were all about the Menchie’s fro-yo. We didn’t think twice about jumping into that line!

Overall, the Houston Half didn’t disappoint. I think it went smoother than last year. From the packet pick up, to parking, to race start and finish line, I enjoyed the race and would do it again!

Now I have one race under my belt this season. Next up…Houston Tough Mudder this Sunday! YIKES!