Skip to Content
Amy's Balancing Act
You Are Reading
This is How I Zooma!
0
Home Running Races This is How I Zooma!
Do y’all remember last October when I announced I had been selected to be an ambassador for the Zooma Women’s race series? If you don’t remember that, you probably remember the countless posts where I told you to sign up! Well I know that some of you remember because I had 12 people sign up using my ambassador discount code! Way to go y’all! Well, this past weekend, I finally got to run the Zooma Texas race and meet all the ambassadors that I’ve been chatting with via Facebook and following each other’s blogs.
It all started Friday late afternoon when Ashley and I took off for the Hyatt Lost Pines Resort in Cedar Creek, TX. It was an easy 2 hour drive from Houston and we pretty much missed traffic while we cruised down the HOV lane! We got there, met up with Ali and headed straight to the expo. They had several vendors and we got some pretty sweet SWAG…a shirt, hat and Feetures socks! I forgot to take a picture. #bloggerfail
After the expo, we found Caitlin and Melanie and went to the HonestTea Mocktail Party. 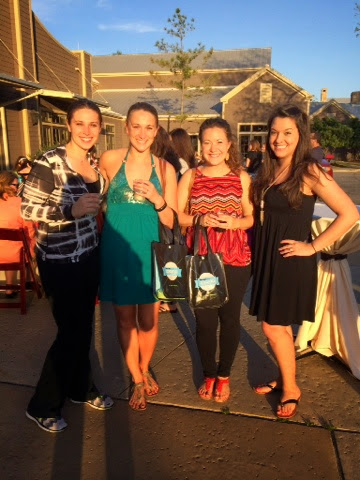 We had appetizers, HonestTea and some Barefoot wine! My favorite was the sweet red. It was delicious on ice! I also finally got to meet all of the beautiful ambassadors at the Mocktail Party!!! 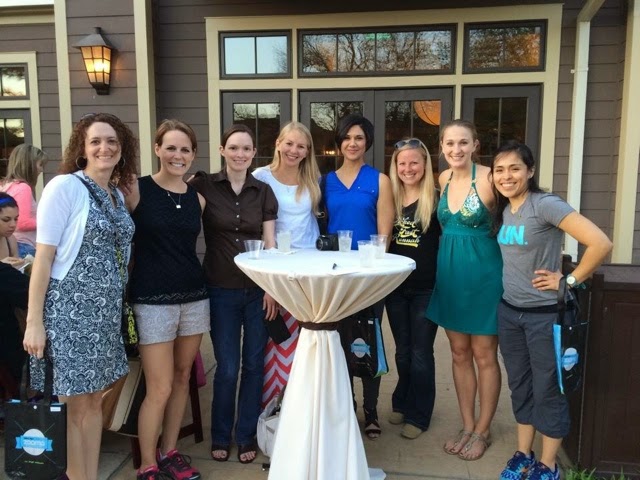 Check out that group of lovely ladies! So glad I was finally able to meet each of them 🙂
Then it was time for our prerace dinner. We headed to the casual dining cafe in the resort and indulged in their pasta buffet! It was a yummy evening before race day dinner. Complete with pasta and desserts! We really loved the dessert bar which was the best part of the buffet if you ask me. We may have had a bit too much to eat, but such is life! 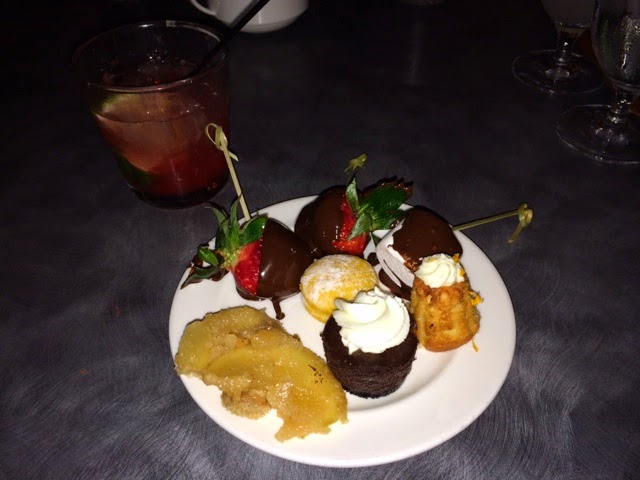 Saturday morning our alarms went off dark and early at 6:00am. Really it wasn’t a terribly early wake up call for race day. Since we were staying at the resort and the race started and ended there, it made everything so much easier! We were able to get up, take our time getting ready and snap a few pictures before heading down to the race start line! 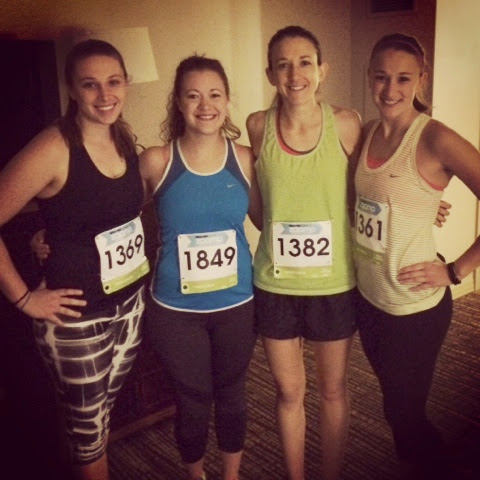 The race start went so smoothly! There were plenty of port-o-potties (which is really important for runners on race morning), it wasn’t overly crowded, it wasn’t rushed and the whole morning just felt so smooth. That’s hard to accomplish on race day. It wasn’t a huge race, just about 800 half marathon runners, 250 for the 10K and 215 for the 5K. I think the size of the race helped in organization, but let me tell y’all, those Zooma ladies totally have it together. They know how to throw a race!
Now onto the actual race itself! Saturday morning was pretty muggy with 95% humidity and about 65 degrees at race start. Far from ideal, but luckily there was a nice breeze that kept the temps feeling a bit cooler. We took off right at 7:30am and were on our way up the first of MANY hills. Y’all I knew Austin was hilly and that this would be a hilly race, but holy glutes! Those this were crazy. It was a constant battle of up vs down. We’d go up a lot, down a little, then flat for a bit.
The first few miles I kept pretty slow to get my body warmed up and to let me lungs get a feel for the hills. Despite the humidity, I was actually feeling pretty good. After the mile 2 marker, I picked up my pace to a solid 9 min/mile and still felt strong. Melaine and I part ways right around there since I was feeling it. The water stations were about every 1.5 miles apart and they had Cytomax and water at each. There was only one part of the race that I felt like they needed a water stop, but I’ll get to that later. Overall, the water stop timing was great.
After going up and down and up and down for the first 7 miles or so, we hit a solid flat area which was a 1.5 mile down and back so we got to cover that ground twice! I really appreciated the fast flat and picked up the pace a little since I still felt great. (I didn’t plan on running this race very fast. I was aiming for roughly 2 hr finish since it was so hilly!) I loved the out and back because I was able to see Melaine, Caitlin and Ashley and we cheered each other on!  There were also several volunteers and a few spectators cheering that we got to see twice!
When we hit mile 10, we started to weave around the golf course at the Hyatt Lost Pines. This was a rough way to end the race because weaving back and forth and being able to see it all made for a LONG last 3 miles. BLEH. There was water at mile 10 then not until shortly after mile 12. Since this is when the sun started to come out and the end of the race was nearing, I felt like there should have been a water station at mile 11.5. I was dying for a sip of water by the time I got to that final water station!
From there I realized I was easily going to finish sub 2 hours and got pretty excited. I finished the race strong and it probably helped when I saw Ali standing at mile 12.9 cheering me on with the biggest smile and the loudest, best cheering voice. I totally picked it up and rocked the last 0.2! 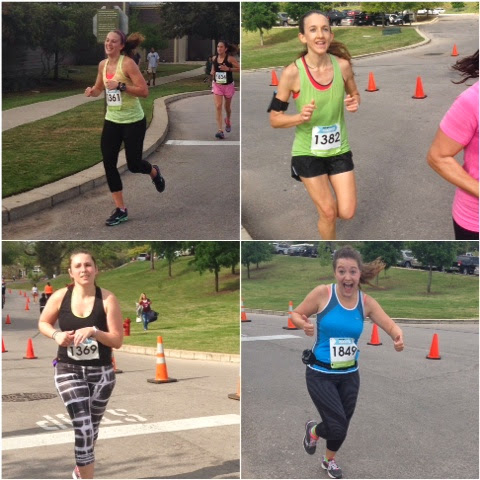 I rounded the corner, saw the finish line and went in for the final sprint! My official finish time was 1:56:31…not too shabby! Several minutes off from a PR, but also, several minutes faster than I anticipated! After I cooled down, I went back out to Alison to cheer on the rest of the runners and my girls! I was so happy I was able to run Caitlin in for her last little bit of her first half marathon! She finished in less than 2:30 which was her goal! All of my girls did awesome on this hill course! And Alison really is the best cheerleader ever. We’re working on becoming professional race cheerleaders. Sounds awesome to me. 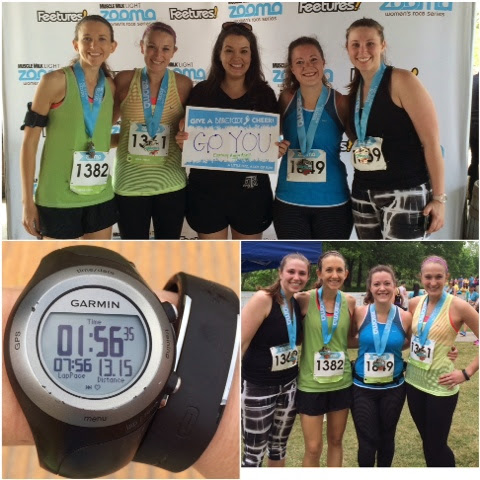 After the race, we got to indulge in lots of post race goodies! Food, wine and animals! What? Animals? That’s right. Check out this super cute miniature pony I got to hang out with! We named her Toni but apparently her real name is Little Feather. I liked Toni. Toni the Pony. 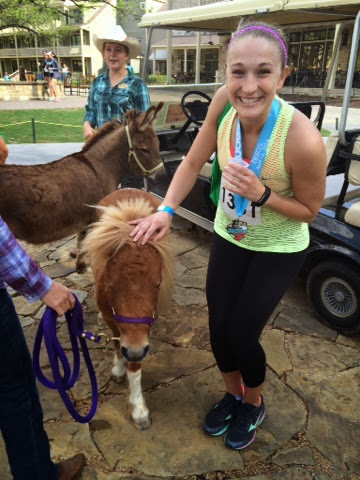 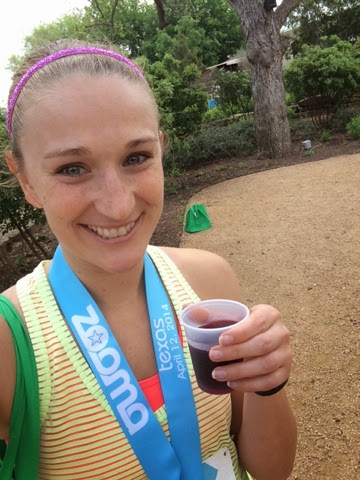 Some of the ambassadors also met up again in the wine garden post race for another quick pic! 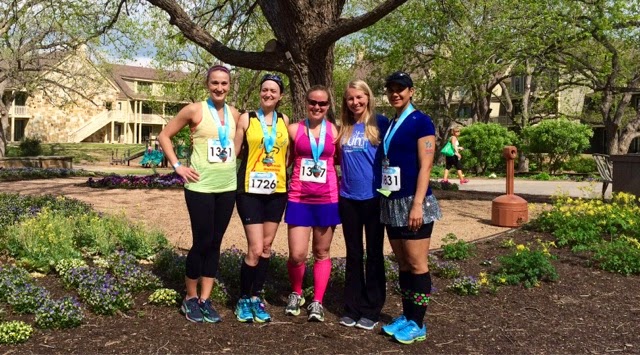 Overall, the Zooma race was awesome. It was by far the most challenging course I’ve run which made me feel even better about my time considering this wasn’t a goal race for me! The ladies behind Zooma have race weekend down to a T. From the easily organized expo to the pre-race mocktail party. From the resort race location to the calm and simple race start. From the course set up to the post race party, everything they did was well organized and made you feel great. There’s nothing better than feeling great on race weekend! Way to go Zooma and thank you for the amazing opportunity to be an ambassador. I loved every minute of it!
Have you ever run a Zooma or women’s race?
What’s the hardest race course you’ve ever tackled?