I considered this trip to Philadelphia my first though this is not true. I actually lived in the Philly suburbs near Valley Forge when I was little. Mom said that she used to take me downtown to play at the historic parks; however, sadly, I was too young to remember this. Due to make lack of memory, I have dubbed last weekend my first trip to Philadelphia, the city of brotherly love.

The weekend started on Thursday night when Andrea’s flight arrived in Pittsburgh around 10:00 pm. I would like to point out that this is probably the ONLY flight that has not been changed, postponed or cancelled when Andrea has tried to come see me! Let’s just say we saw this as a good sign that we had an awesome weekend ahead of us! Friday was a crazy day. I still had to work and I was completely SWAMPED!!! I’m pretty sure the phone didn’t leave my ear {okay I really had on a headset, but you get the picture} for at least 4 hours straight! Luckily, I was able to get everything taken care of and JP made it home early so we were able to get on the road by 3:00 pm.Thank goodness because we had a long drive ahead of us!

Needless to say, the trip was a LONG one! Luckily for me, a package made it to my front door before we left and it happened to be one of my birthday presents. JP decided to give it to me early since it would be perfect for a long car ride. Ladies and gentlemen, meet Lambou Cheese.

When I first saw him, I got so excited and I said, “I love him! And I will call him…Cheese.” Andrea and JP immediately were wondering what I was smoking. I clearly need a filter…or a faster thinking brain, I can’t decide which. In my head it made sense since Packer fans are called Cheeseheads. Well, I don’t like cheese. Seriously, I don’t so this name was silly. I immediately retracted my statement and renamed him Lambou. Well, since my two best friends love to remind me of dumb things I say, the name Cheese stuck and we referred to him as Lambou Cheese the rest of the weekend.

The trip ended up being a blast. We stopped about 4 times, once for gas, once for dinner and 2 other potty breaks. We decided that we were in no rush to get there and took our time, so we even decided to grab a nice sit down dinner to get out of the car. This was especially nice for JP since he drove the whole way.

We made it to Philly around 9:30 pm. This meant that we were on the road for about 6.5 hours, but at least 45 minutes of that was spent at the restaurant for dinner. Once we got our rooms, we all hung out for a little while watching movies on t.v. until Andrea and I were pretty much falling asleep. We had a long weekend ahead of us, so we weren’t against going to bed at 11pm on a Friday 🙂

Saturday we woke up and had breakfast in the lobby. I love Hampton Inn free breakfast! We all had super yummy waffles and our tummies were satisfied. Once we finished getting ready, we headed downtown (we stayed out by the airport) to go to the expo!!! 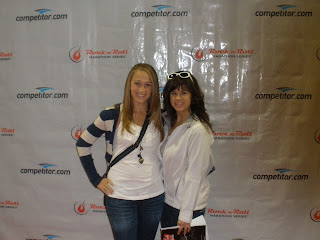 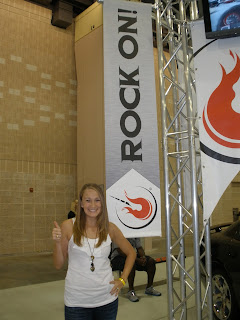 The expo was so much fun and we got lots of freebies and some future race ideas! I always love wandering around race expos; they get me super pumped about running! I also did an alignment test and bought some insoles for my shoes! I pronate…bad…due to my high arches. I’m testing out the insoles right now and I’ll update y’all on how I like them and talk a bit about pronating in my Sunday Run Day post this week! I promise it will be interesting 🙂

After the expo, it was time to wander around town. Since we parked in a garage and were good to go all day, we walked all around town! 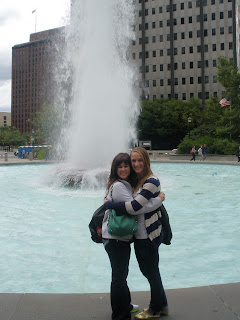 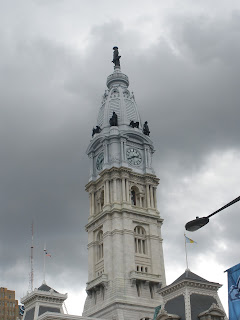 The city itself is just so neat and so…old. There are tons of beautiful parks and historical buildings. If we had more time and didn’t need to rest out feet (we were running 13.1 miles the following day), then we would have waited and done some of the tours, but our true mission was to run!

We found our car after exploring most of the city and headed back to our hotel to rest our feet. Luckily it was Saturday, so we were able to chill and watch an hour of college football before heading out to dinner! Lucky for us there was a Ruby Tuesday within walking distance from our hotel. Now Ruby Tuesday isn’t somewhere that I usually pick to dine, in fact, prior to this weekend, I honestly don’t remember the last time I went. This will now change because the food was delish! I would also like to point out that they include nutritional information right there on their menu, so you know what you’re getting yourself into before you put your fork in your mouth! I personally think this is AWESOME and that all restaurants should jump on the bandwagon. They also have a plethora of sides with tons of healthy options. Roasted spaghetti squash? Grilled zucchini? Yummmm! Seriously, these types of sides are not found on the menu at every restaurant and I appreciated the variety.

After watching more football, enjoying a drink and dinner, we wandered back over to our hotel! Anne and I decided that our feet needed the star treatment, so we soaked them in a super hot bath and scrubbed them down! They needed to be in tip top shape for the race!

Well, you know what happens the following day. Lots of running, cheering, celebrating, eating and driving back to Pittsburgh. Didn’t get a chance to read about the race? Take a look at my Rock ‘n Roll Philly recap! Has anyone else ever been to Philly? Is there something that I missed out on during my visit? {I’m sure there was, we didn’t get to spend enough time there!}