As you all saw from the sneak peek, I spent this past weekend in TEXAS celebrating Ms. Alison Stern! I flew in Thursday evening and had a headache when I got on the plane. It’s safe to say the the little girl with the hacking cough (I did feel bad for her though) and the 2 year old two rows in front of me that screamed bloody murder the last 45 minutes, didn’t help my headache. Luckily, my wonderful daddy picked me up and came prepared with one of those Twisted Iced Teas for me to try 🙂 Such a sweetheart.

On Friday, we headed to Galveston! What should have been about a 1.5 hour trip ended up taking about an hour longer due to first Friday of summer traffic and the fact that we got turned around trying to find the rental place that had the keys to our beach house. In the end, we made it there and that’s all that counts!

Luckily after a long week of work and travelling, Friday night was relatively low key. By that I mean, we didn’t leave the beach house. It’s safe to say we had a fabulous time though. The drinks started flowing as soon as we got there and didn’t stop until well into the morning. We ordered pizza, walked on the beach and of course, had an amazing dance party. What’s a bachelorette weekend without a dance party anyways? 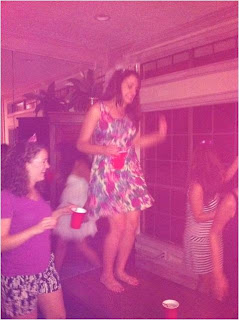 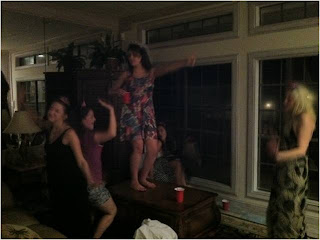 Saturday morning we were actually up pretty early. Laura Whalen and Jessica Stoner were our amazing chefs and made all of the girls scrambled eggs and pancakes! Breakfast of champions. After breakfast, we all got into out bathing suits to hit the pool. 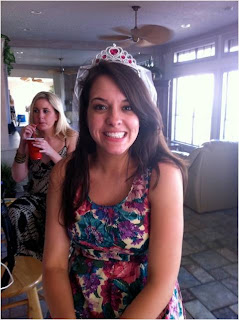 We decided that we were going to sneak into the San Luis Resort Pool because they had a swim up pool bar 🙂 along with a gorgeous pool, chairs to layout in and a grill for lunch. We split into two groups so that we wouldn’t look suspicious with 8 girls just waltzing in without wristbands (that’s how they determined if you were a guest or not). My group went around to one entrance where we were turned away by the mean employee who wouldn’t let us in…bummer. The other group went right in the front entrance with ease! We decided to follow suit and ended up getting in as well. Thank goodness because we ended up having such a blast there! Here are some pictures of the beautiful pool! 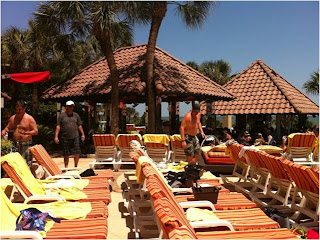 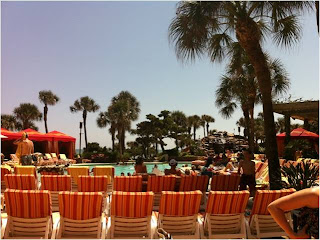 After a full day at the pool, we went back to our beach house to get ready for dinner and the evening plans we had ahead of us! Once we were all ready, it was time for the lingerie shower!

﻿﻿ Alison got lots of fun/pretty/interesting things and for her sake, I will keep those pictures to myself 🙂 Instead here is a picture of the beautiful bride-to-be! 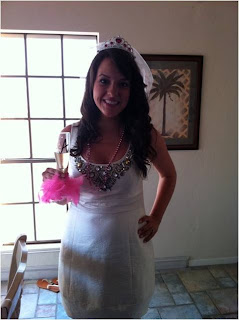 Following the shower we all toasted to the future Mrs. Crowson with the fun champagne flutes that Laura Whalen made for everyone.

Then we were on our way to dinner. All of us piled into one minivan cab and we were seriously piled. Tight fit, but cheaper than two cabs for sure since we were all the way out on Jamaica Beach. We went to dinner at a Mediterranean (my fave!) restaurant called Olympia Grill. 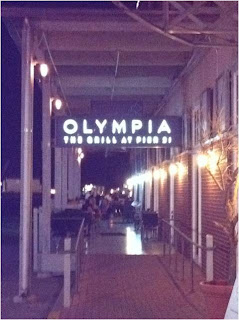 There we met a guy named Michael White, “like the color.”  Michael turned out to be quite the entertaining character. The was very confident (could have been the alcohol), but he was not afraid to come up to a table of females and just start asking all types of questions. Following the Q&A session, he serenaded us with Part of that World from The Little Mermaid. Yes, he knew every word, yes we sang along with him. We were impressed, but at this point it was time for us to hit the bars. The first bar was kind of lame, so we asked our cab driver to take us somewhere fun and he did! We had a great time and Alison found a friend whom we called Javier, but his name was Jamie. He thought that Alison was the most beautiful bride-to-be in the world (which of course is true) and told us that we could put all of our drinks on his tab. Well, you don’t have to tell us that twice. Yay for free drinks!

I also followed Alison around and as she met new people I would say that she accepts free drink and oddly enough, it worked 🙂 We had a GREAT time at this new bar and found absolutely no reason to leave. We met all sorts of people, danced and had a great time. Alison found an ottoman which she called her pedestal and danced on. One of the bouncers told her to get down for safety reasons and she told him that she would only get down if he bought her a drink. Now, if you ask me, that makes complete sense. How dare he ask the bride to get down off of her pedestal without offering her a drink first?! Luckily, we were able to get her down in one piece. Want to know the best part of the night? We all made it home and no one got lost or stolen!!! Good job team 🙂

On Sunday morning, we were all moving a little bit slower than usual, but we managed to clean up the beach house and get everything packed up by 11am. At this point, some of the girls had really long drives ahead of them, while others had to get back to the airport for their flights. We have a quick lunch at McAllister’s and were on our way. Jessica Stoner, one of the other bridesmaids was actually going back to Sugar Land and she was sweet enough to take me back to my parents house! My flight wasn’t until Monday evening since I had planned on going to the office on Monday so I had the rest of Sunday to relax! I laid out by the pool, went on a walk to the grocery store with my daddy, helped Daddy cook dinner, drank some wine and then Dad, Matt and I went to a graduation party for Erica Blanchfield! She just graduated from high school and will be attending Sam Houston State in the fall, oh and she made the cheer squad! I feel so proud since I actually coached her in cheer back when she was in elementary school!

Anyways, I had an amazing weekend back in Houston! Today, JP is flying out to VEGAS for Philip (Alison’s future hubby) for his bachelor party! Then the next weekend, I’m flying to Chicago and meeting up with my daddy for my cousin’s wedding! Safe to say we’ve got a busy summer ahead of us. I have more posts to come so stay tuned! Until next time…