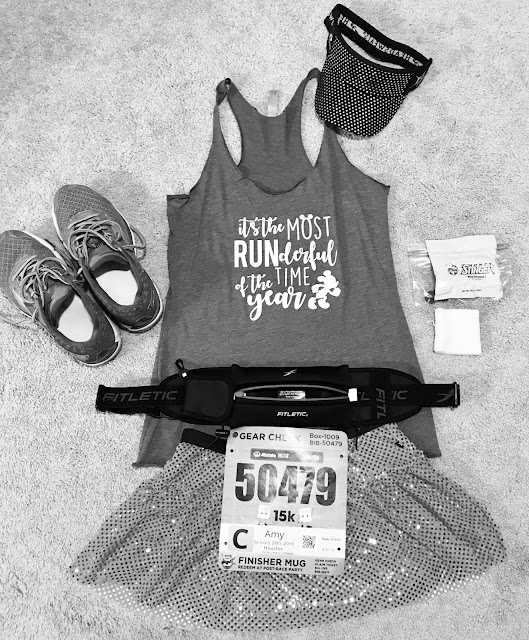 On Sunday, I did a thing…I ran my first race of the year! If you’ve know me or have been following me for any amount of time, you know that running holds a very dear spot in my life. I started running in college and ran my first half marathon in November 2009 during my last semester of college. If you’re interested to see the races I’ve run or read some other recaps, check out my Races tab!

My 2018 inaugural race was the Houston Hot Chocolate 15K! Let me tell y’all this, the race is true to their name! There is chocolate and hot chocolate everywhere. Inflatable chocolate characters, chocolate on the course, the most delicious chocolate snack bowl at the finish and even a chocolate bar shaped race medal. This race was on point with their swag and worth every penny of registration fee. You also get a race half zip pull over that is great quality and I already wore it to work Monday!

Now let’s get to the race! (Photos courtesy of my awesome husband and biggest supporter. He ran around the race course to see us 5 different times!) 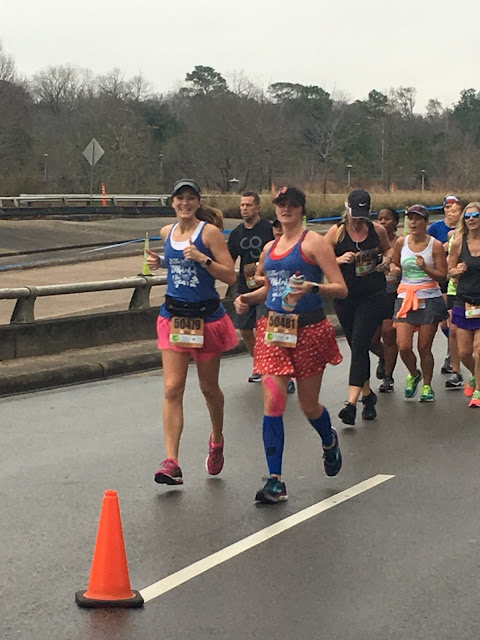 I ran this race with my awesome running buddy Rachael! The race started and finished near Sam Houston park on the edge of downtown Houston. We ran the first half mile or so through downtown and out onto Allen Parkway. If you’re a running in Houston, you know that pretty much every race involves Allen Parkway or Memorial Drive. Race directors just love that long stretch of straight road with all the man made hills thanks to all of the underpasses!

The weather for the race was definitely warmer than expected for January. For this January at least! It’s been so cold and we’ve had wonderful, cool, low humidity mornings, so I thought his would be great race day weather. Wrong! It was 60 degrees and 100% humidity. Don’t get me wrong, it wasn’t the worst race weather by any means, but it could have been better! 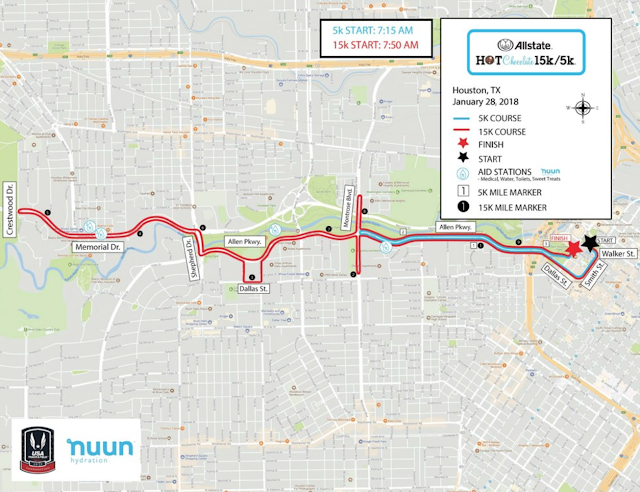 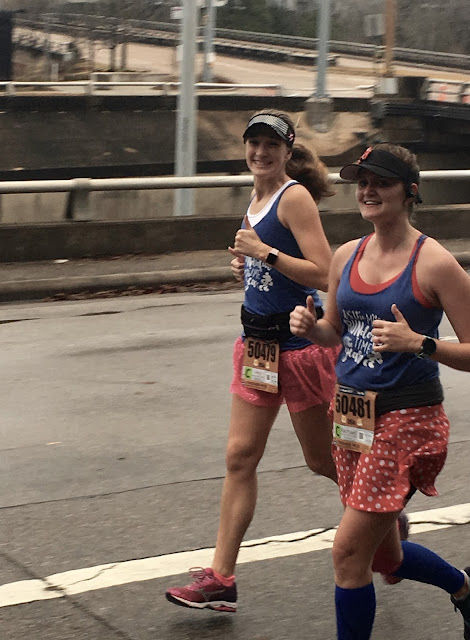 We started off the race with a nice, comfortable pace. We weren’t actually racing this race for time, just for fun. So I’m not going to post mile times or anything! We were running this as an even more fun training run for our Princess half marathon next month. Plus Rachael had just gotten back from two weeks in Europe and I hadn’t run much after being sick the first 3 weeks of the year!

We maintained a really solid and steady pace for the first 5 miles of the race, but we both agreed that those 5 miles seemed to go on FOREVER! Some races pass by quickly and some are so slow. This one felt slower, and I think our lack of running the past couple of weeks had something to do with it! 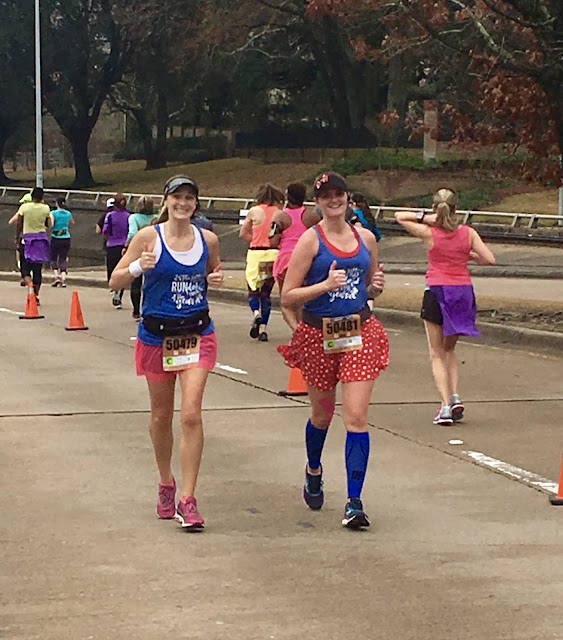 The first water stop was around mile 1.5, and we saw JP and Chloe at mile 2 and 2.25 after the weird little out and back. We saw JP and Chloe again at 3.5 miles since he jogged down the bayou so he could surprise us in a spot where we weren’t expecting him! Bravo sir. The next water stop wasn’t until after mile 4 and this is my biggest complaint about the race. Running in 100% humidity is rough and sweaty. Not having water for almost 3 miles on a distance race course is too far in my opinion. I was very thirsty and had to take a Nuun and a water to properly hydrate. The rest of the water stations were spread out well at mile 5.5 and mile 7. Mile 7 is where our race kind of took a turn for the worse. We got to see JP and Chloe again, but Rachael’s old foot injury started bugging her and my hamstrings were cramping up like crazy. {Going to gymnastics for the first time in 5 weeks on Friday probably was a big contributing factor to this!} Instead of pushing too hard, we kind of pulled back for the last couple of miles. Neither of us wanted to injure ourselves before Princess weekend. We managed to finish the 9.3 miles feeling pretty good with smiles on our faces! 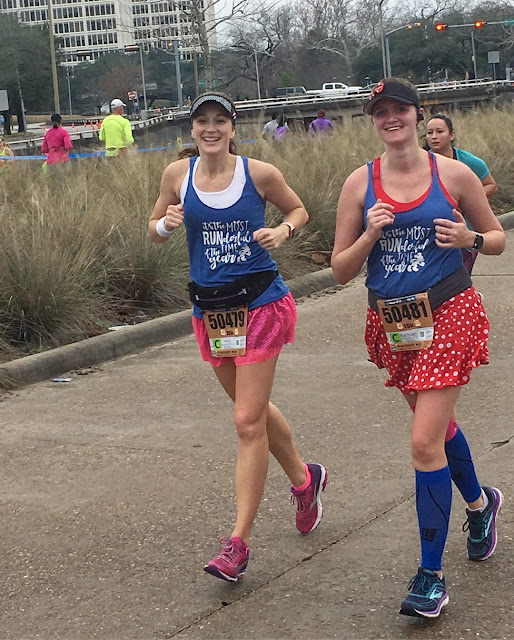 We got our medals at the end along with water and Nuun tablets! Then made our way to get our real post race goodies. 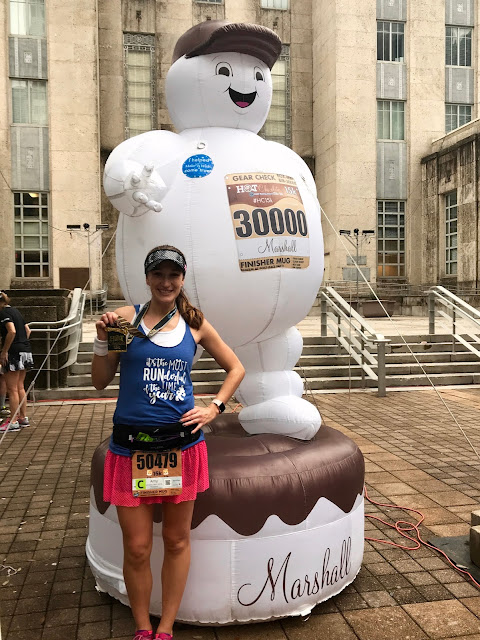 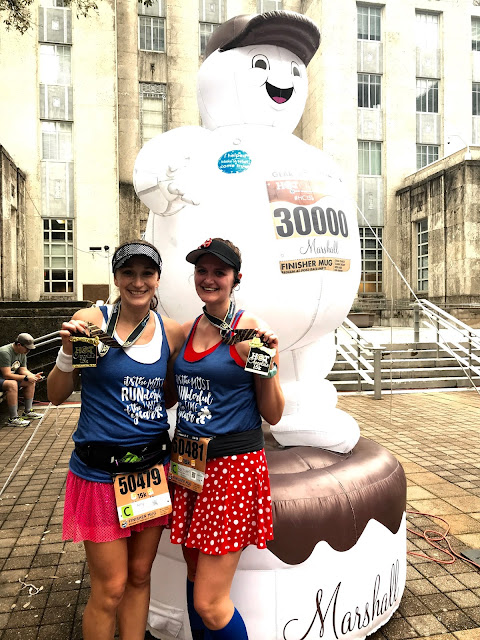 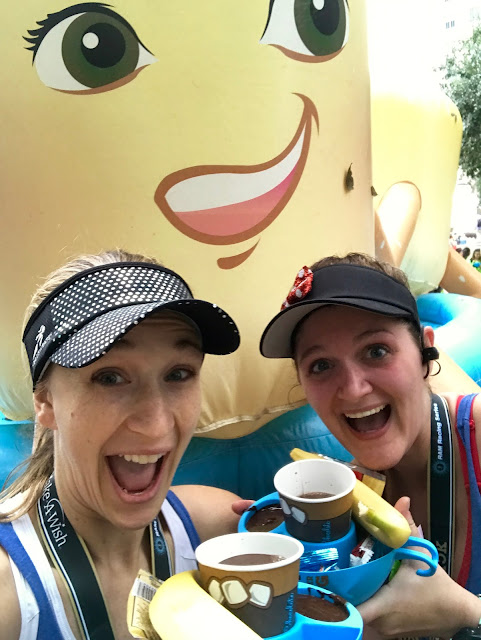 When I said the post race swag was on point, I wasn’t kidding! We got these awesome “mugs” that hold snacks, a drink and even a place for dipping sauce…or chocolate! We had a banana, pretzels, cookies, marshmallows and a rice crispy treat for our chocolate dipping pleasure.
We were definitely hungry and dove straight into these goodies after taking some super basic pictures. I mean it was too perfect to pass up! 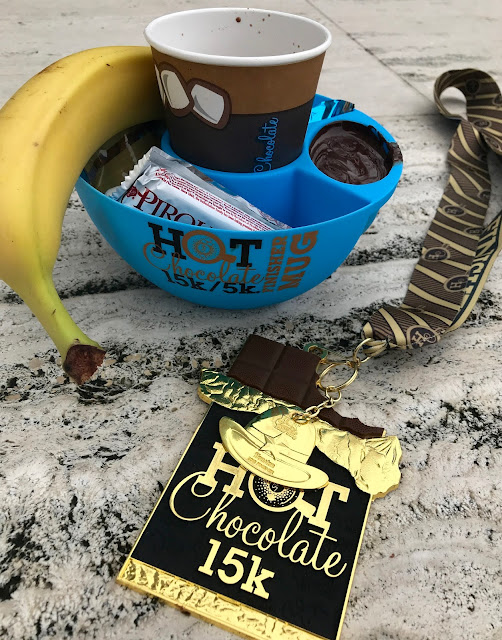 After we got all of our goodies, JP and Chloe were just around the corner waiting to pick us up in the car and take us to brunch. Princess status y’all!

But obviously we went to brunch because what’s the point of running long distances on weekends if you can’t have brunch afterwards? We went to Weights and Measures in Midtown and it was amazing with tons of options. I highly recommend it to anyone in the Houston area! 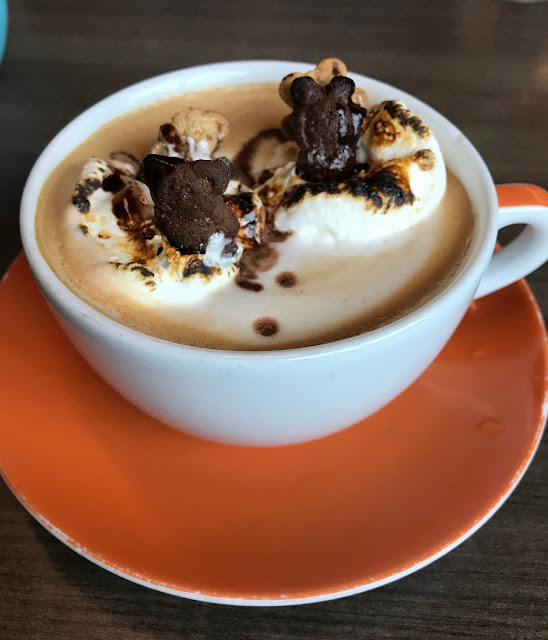 I decided to keep the chocolate trend going and ordered a s’mores latte! I needed a pick me up after my 5:40am wake up call and running 9.3 miles! Yes, it was as delicious as it looks.

For food, I ordered avocado toast! It was brioche bread topped with avocado, bacon and eggs with a delicious sauce. I took off half of the eggs and all of the bacon for little Chloe to much on. Also, those potatoes on the side are life and I want more now. 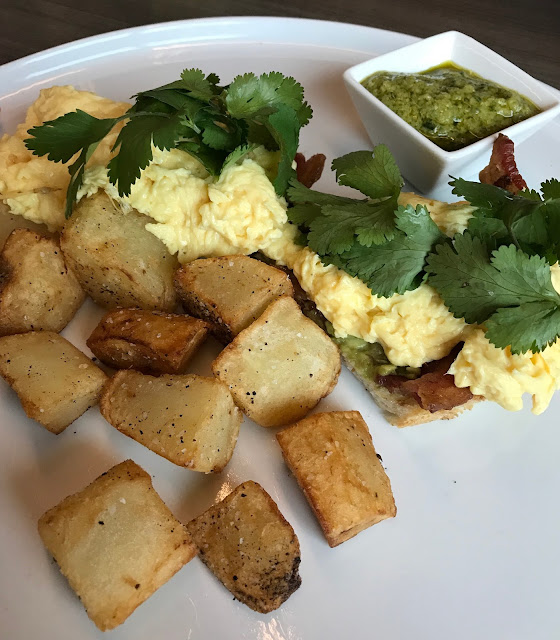 There you have it. My first race of the year! With more races to come. That’s right, next month is my annual girls Disney trip and I’ll be doing a 5K, 10K and half marathon Friday, Saturday, Sunday. Bring it on Glass Slipper Challenge! We’re ready and coming for ya.

What is your favorite race distance?
Do you know of an awesome race that I need to run? I’m willing to travel!