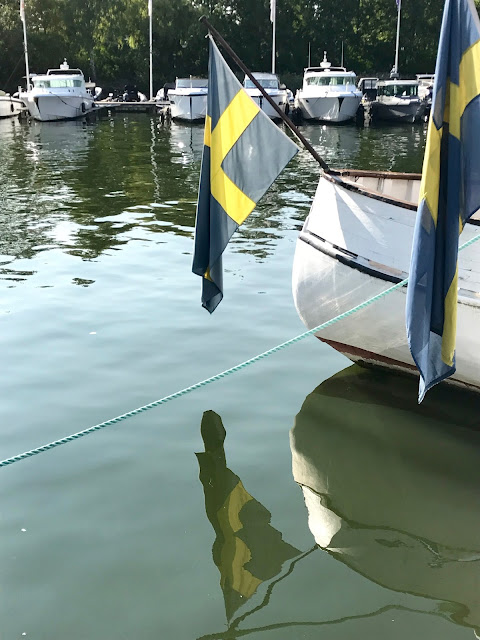 Looking back at all of the pictures from our trip brings me such joy. It makes me realize just how lucky we are to have experienced a trip like this. Not only did we get to visit 3 countries and 5 cities, we had gorgeous weather, amazing views and easy travel.

I last left y’all after our first day in Sweden visiting Gamla Stan after a night of no sleep! The next day we woke up and went off to visit the Vasa Museum. 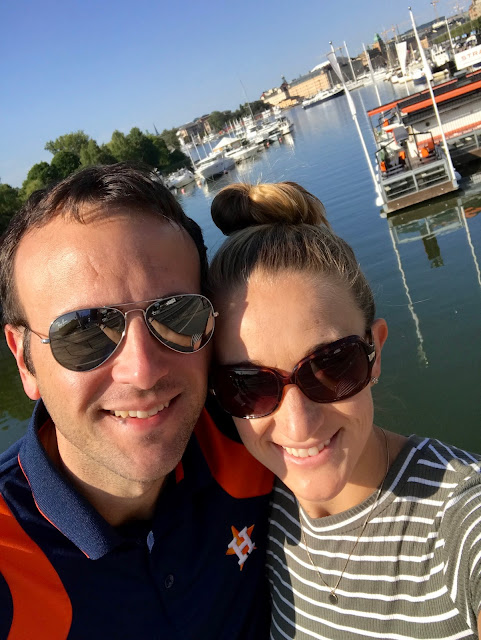 We were going to take the bus, but a little birdie told us to walk out Strandvägen. I don’t turn down advice from a local! So we walked along Strandvägen which is right by the water the entire way. There are gorgeous boats on the water and restaurants along the path. It’s the perfect place to spend a sunny afternoon fika.

After a solid mile walk down Strandvägen, we came to the bridge that crossed us over to Djurgarden. Djurgarden is an island packed with things to do! This is where many of the city’s greatest attractions lie. There are tons of museums, parks, restaurants and even a small amusement park. You could easily spend the entire day there. In fact, this wasn’t the only day we found ourselves at Djurgarden! 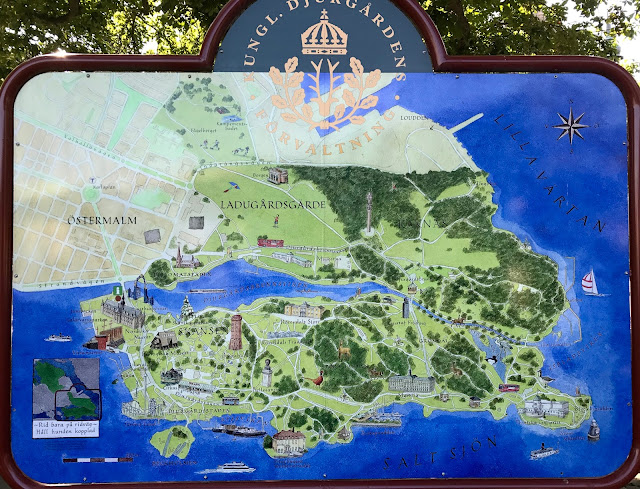 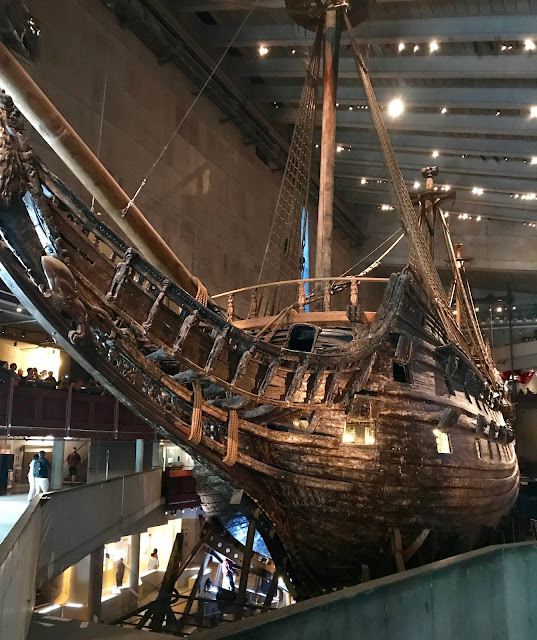 Of course the true purpose of our outing was to visit the Vasa Museum or Vasamuseet. I have a ton of pictures and lots of fun facts, but I really want to give y’all a brief background on this magnificent boat.

The Vasa ship was a Swedish war ship that was built in the 1620’s. King Gustavus Adolphus made the orders to build the ship to expand their military during the war against Poland-Lithuania. Most ships in the Swedish fleet were small to medium in size with only one gun deck. Vasa outsized all of the ships and boasted two gun decks with heavier artillery. You can see the openings for the guns really well in the image below! Fun fact about the gun deck: The King ordered it to have 72 cannons after construction had begun. Since that was too many to fit on a single gun deck, they just added another one above. This would have been completely reasonable, but after they lifted the ship, it was determined that the center of gravity was too high because of this change. 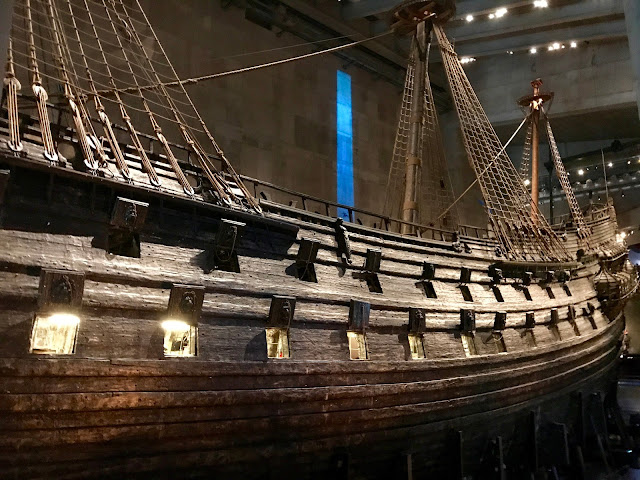 The best part of the story {and the entire reason this boat is so well preserved} is that only 120 meters from the shore, the ship sank to the bottom of the fjord only 32 meters below the surface. This happened in front of hundreds of people on the ship’s maiden voyage. I find this completely fascinating!
Below are some pictures I took of a 1:10 scale model of the ship in all its glory: 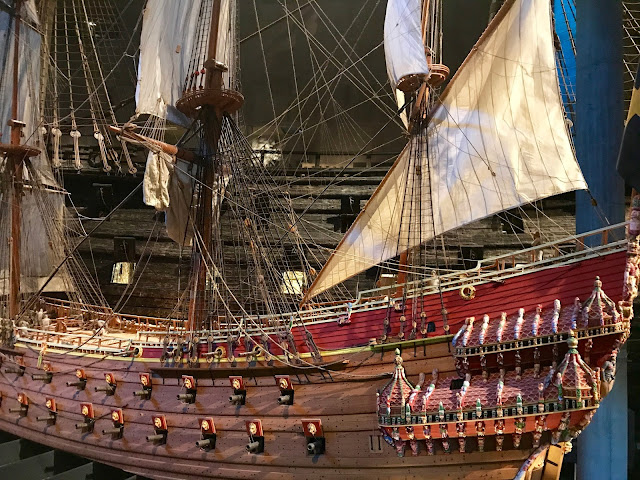 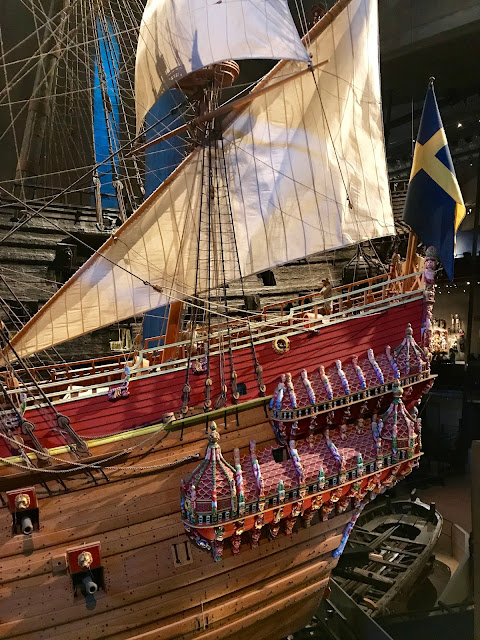 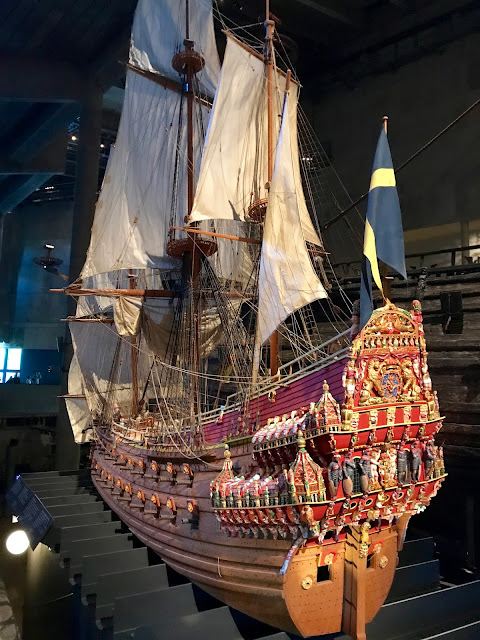 Over the years, pepple made attempts to recover the ship. Divers were finally able to raise the ship from the bottom of the harbor in 1961333 years after it sank. It took a year and a half and a series of 18 lifts for it to finally reach the surface. 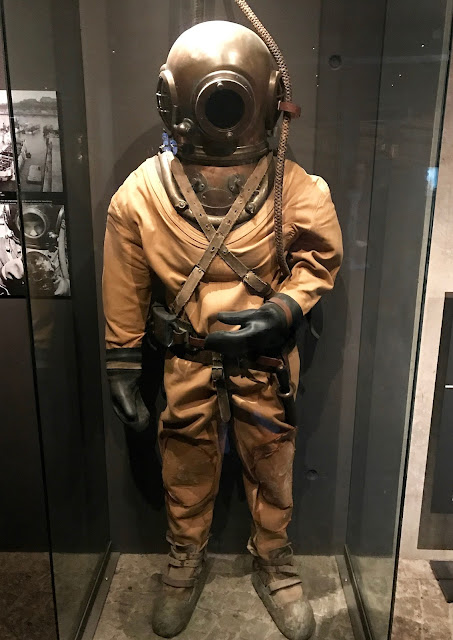 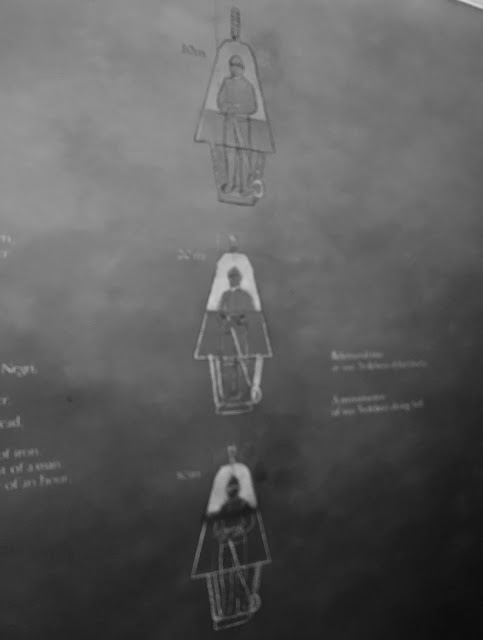 The awesome contraption in the drawings above is shown as a model below. This is a diving bell that they used in the 1600s to retrieve cannon balls and guns. 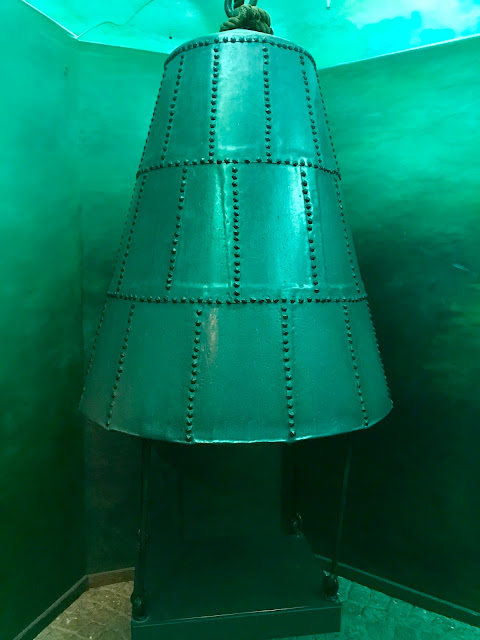 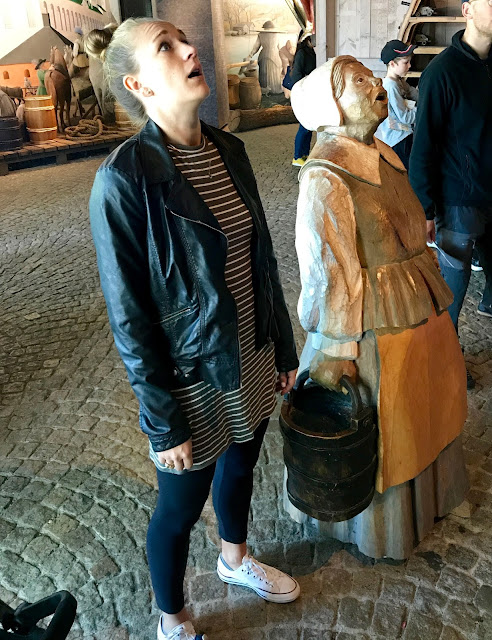 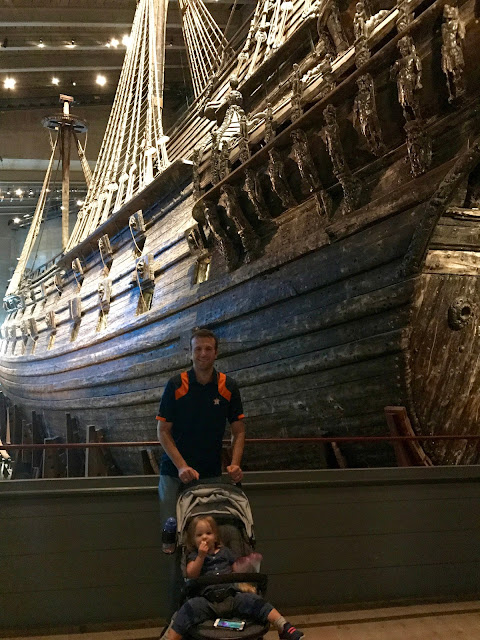 The museum itself is amazing. You walk in to immediately see the Vasa ship in all it’s glory. There are different exhibits around the museum that teach you not only about the history of the ship from building to sink, but also about the people that were involved, the remains of the people who passed away, the weapons of the time, wars of the time and more. 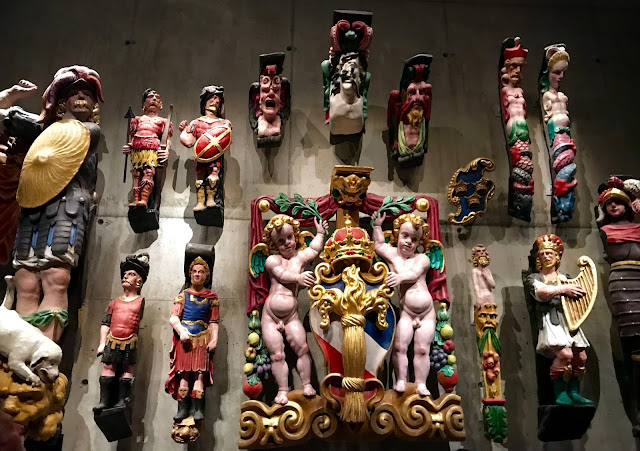 Above are replicas of the sculptures that adorned the front of the boat in the colors they were believed to have been when it sank. They determined the coloring based on other sculptures of the time and the coloring of the wood. It’s amazing how they can do that after 300 years under water. 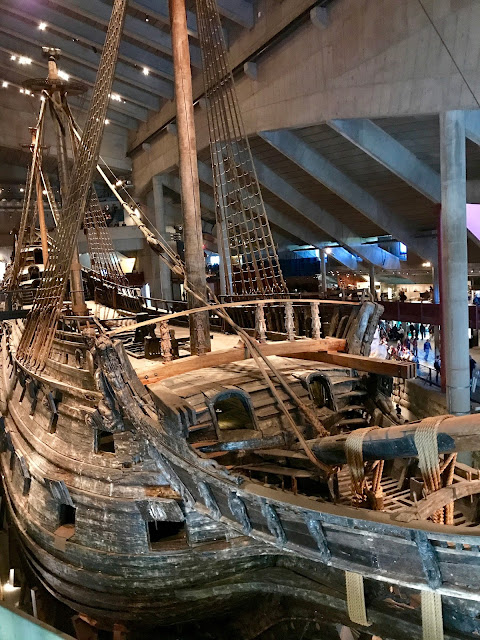 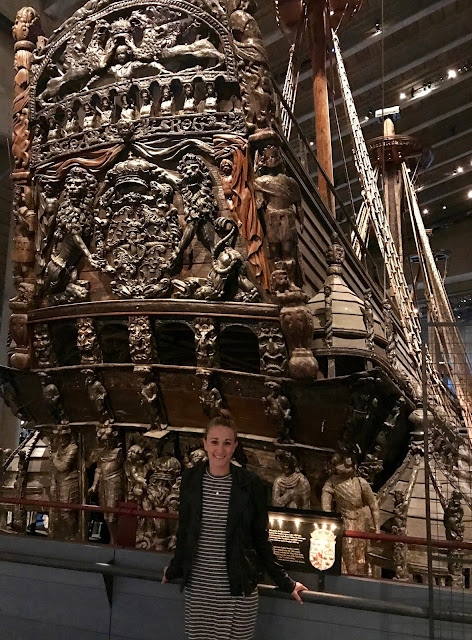 Another thing I loved about the museum is that there were 5 different levels with exhibits which meant 5 different angles to see the ship! There was also a free audio tour through the museum that we were able to follow along. This is where I got all my info and fun facts! 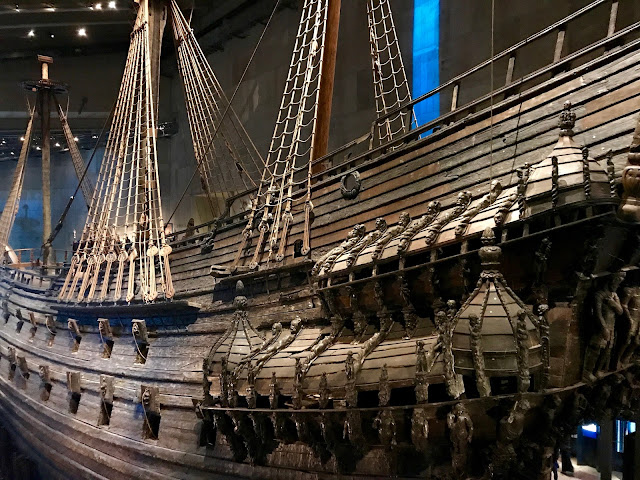 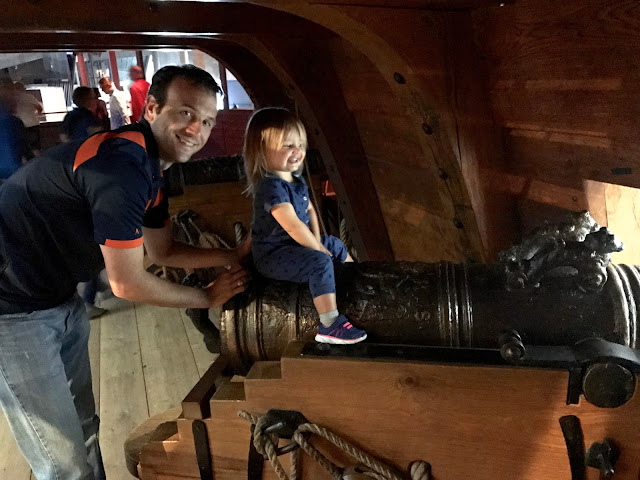 Chloe’s favorite part was running around and playing with her daddy in the area that mimicked the size of a gun deck!

Mommy’s favorite part was learning about the history of the boat and the backgrounds of the people who perished in the ship’s sinking. Based on where the bodies were found, what they were wearing and the condition, they were able to determine a proposed cause of death. They also were able to give assumptions on their background and what they were probably doing on the boat! 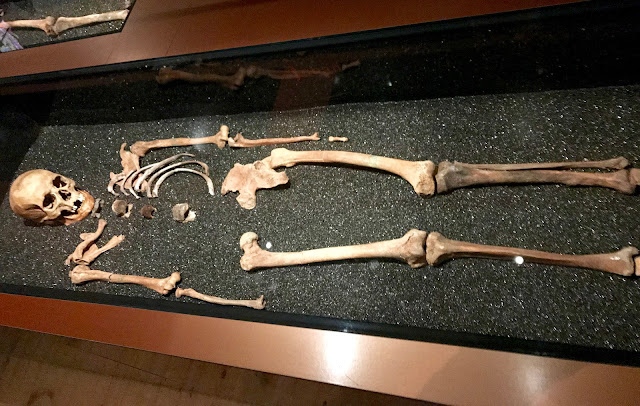 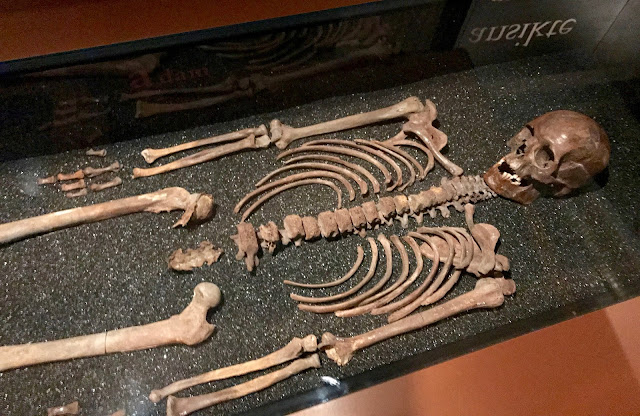 I had an amazing time at the museum. This place is great for people of all ages, and you don’t have to be an obsessive history buff like me to enjoy it. The story of the ship alone is worth going to see it!
Plus the museum is a happening area, so you can do so much while you’re over there. For instance, eat a delicious Swedish meal! 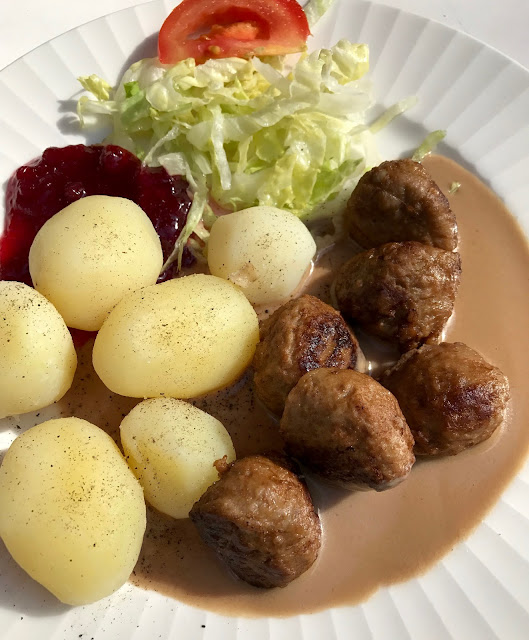 After we spent several hours exploring the Vasa, we walked back down Strandvägen and found a park to let Chloe run, play and burn some energy. Another amazing thing about Stockholm {and the other cities I’ve visited in Scandinavia} is there are so many parks to just take a break or play!

Here’s some Chloe just for cuteness… 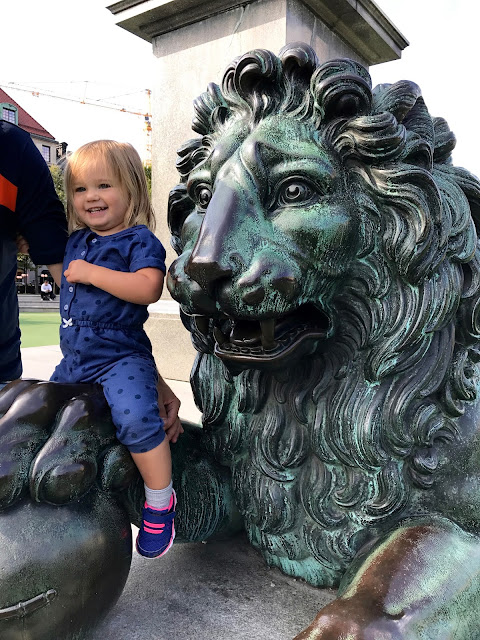 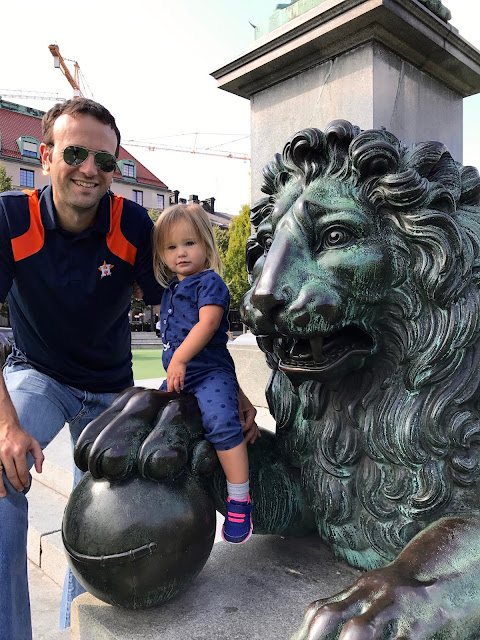 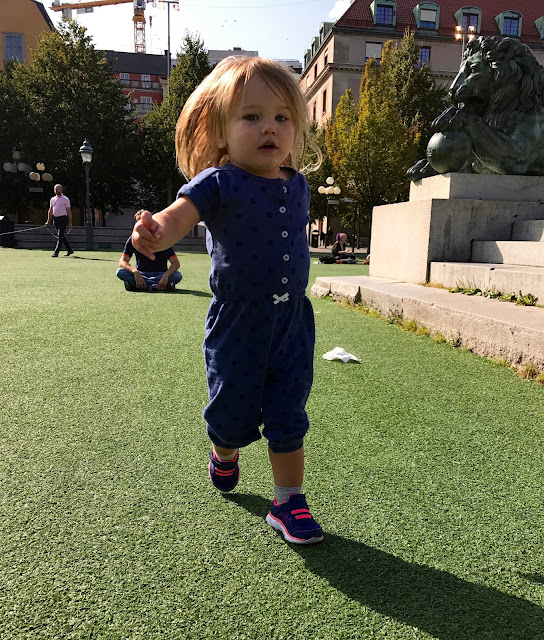 And there you have it folks, a history lesson on this Friday! If nothing else, you can now go forth and say you learned something today. Or you can pull fun, random fact out of your pocket at work. You’re welcome for that. So happy Friday and have a fabulous weekend y’all!