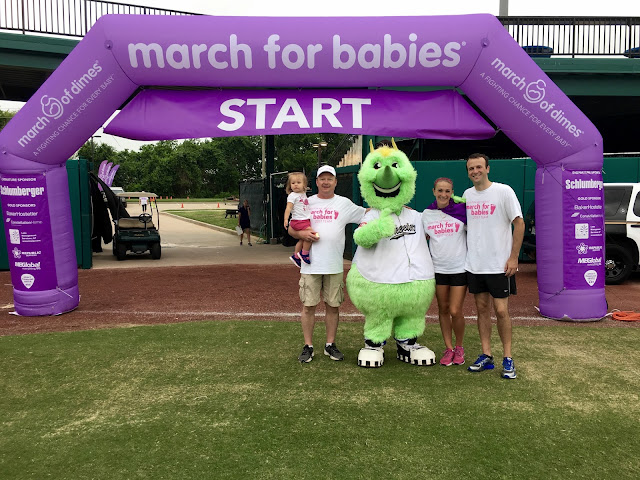 This past Saturday I was able to participate in my second March for Babies walk! My mom is a NICU nurse and lactation consultant at Houston Methodist Hospital, and her colleagues at the hospital set up a team to participate! Last year was my first year to participate and we walked in the Houston march. This year was the inaugural event for Sugar Land which was great because we didn’t have to drive into downtown. Now that we live in the burbs, that’s a plus.

The Fort Bend event was hosted at the Sugar Land Skeeters stadium! There was plenty of space to run around plus tons of activities for adults and the kiddos before and after the event. 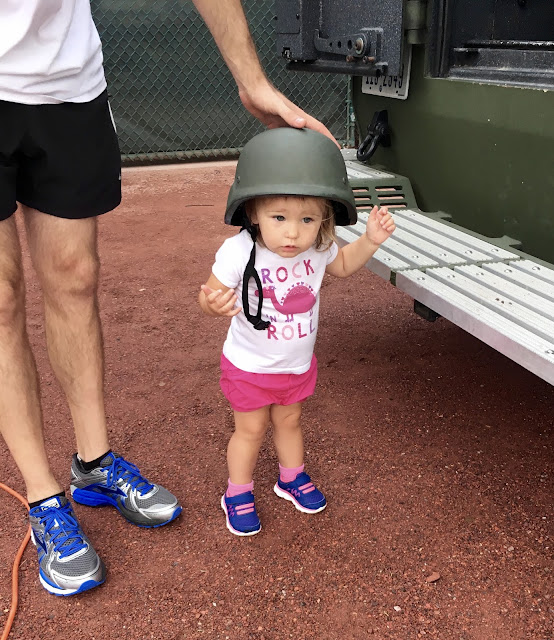 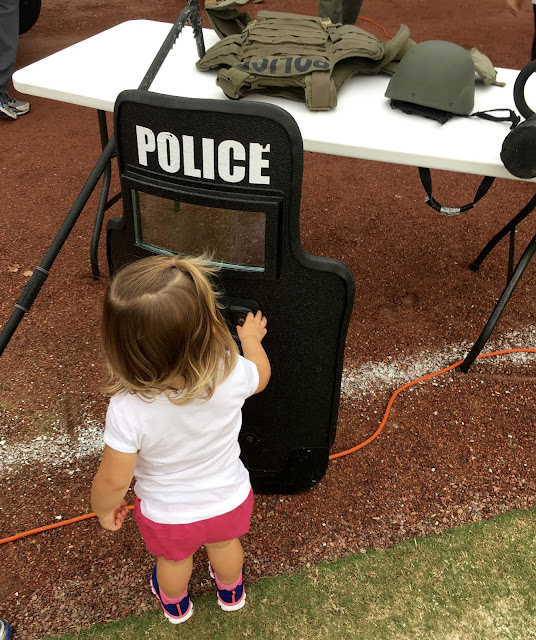 We got there early, so we had plenty of time to explore all the different tents people had set up! First stop was the Police Force to check out the S.W.A.T. vehicles and police gear! Chloe got to climb around in the back of the S.W.A.T. truck. She thought it was hilarious and kept wanting to jump out to us then climb back in. 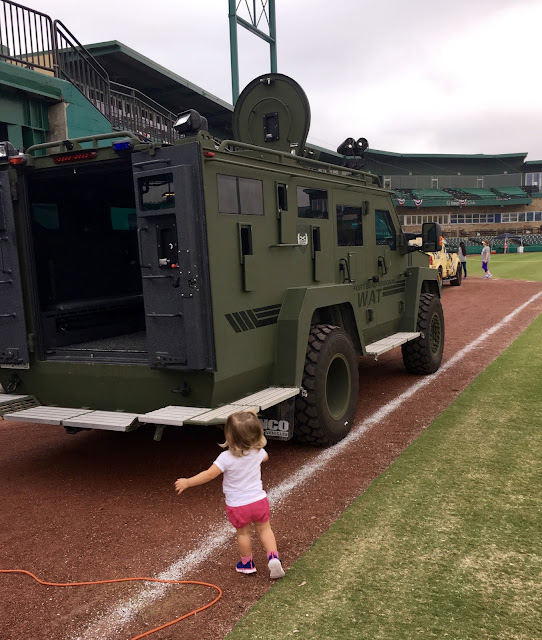 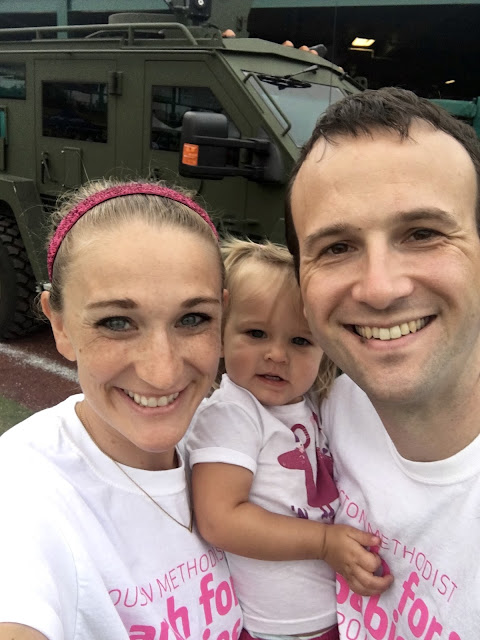 Some other tents that were set up were for other hospitals, large teams, HEB, a reason why tent and the official March for Babies tent. I decided to get Chloe a cape for $1 at the March merchandise tent. It was hard to pass up for just a dollar! I figured it could be added to her dress up collection when she gets older since she didn’t really care about wearing it yet. At least she got to be a super hero with her daddy for a little bit before ripping it off and insisting that mommy wear it for the walk! 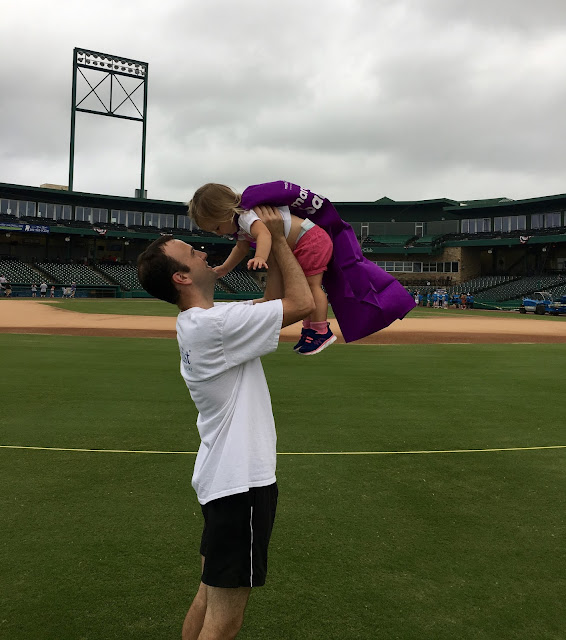 The actual walk started at 9:00am. It was 3.2 miles on a miserably humid and windy morning. It was about 80 degrees, but 100% humidity making it feel much hotter than it was. Plus the wind wasn’t a lovely cool breeze. It was more like 15-25 mph warm winds that whipped around like crazy.

The walk itself wasn’t that bad though. The course was a beautiful one around a lake in the nearby neighborhood. Luckily the winds would come and go instead of a constant battle with each step. JP was a rockstar hubby and pushed the jogging stroller the whole way. Usually I’m the one that pushes her, but he decided to take it on and battle the winds. Along the course, they had several little stops with drinks and freebies! One stop about halfway through even had mimosas! It was pretty legit. They people manning the station had to keep telling kids that they weren’t allowed to have that kind of orange juice! 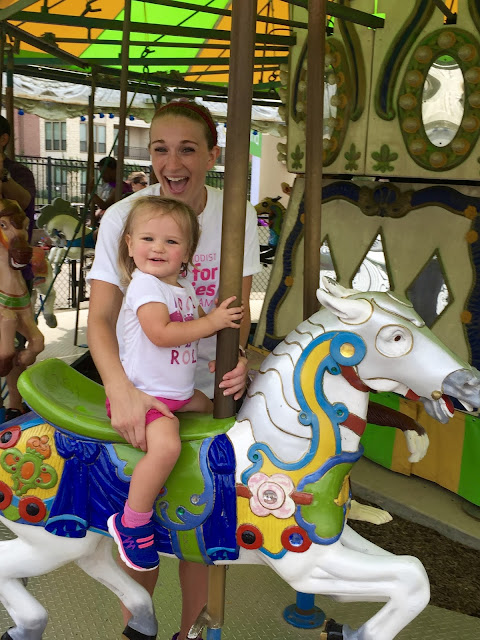 Once we finished the walk and were back inside the stadium, there was more fun to be had! The stadium has tons of kid activities around the outfield. A splash pad, different playgrounds for different age groups, a carousel and a pool! They had the splash pad and carousel on for the kids to play after the walk. Chloe loved riding on the neighhhhs. After meeting Kristin’s horse Slider the weekend before, she’s kind of obsessed with horses and it’s adorable. She probably could have ridden it over and over again, but we pried her off. Luckily she was able to play on the slide to distract her from the horses. 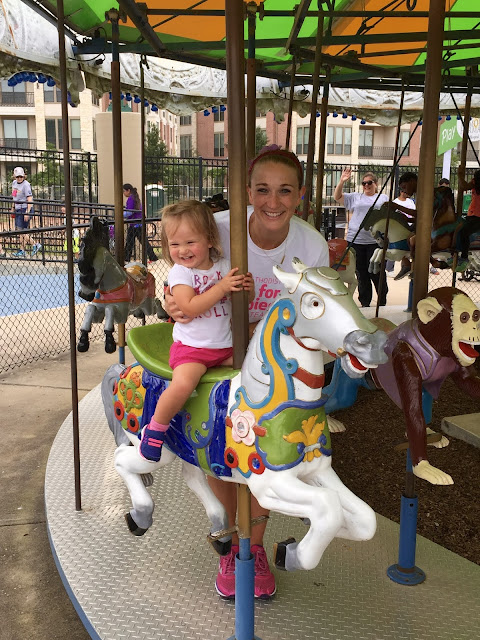 The inaugural Fort Bend walk went off with a bang and was a great success! I was really pleased with the way the event was run and can’t wait to participate again next year.

If you feel compelled to donate to March of Dimes, you can do so on my campaign page here! I was fortunate enough to not have my baby in the NICU, but that doesn’t mean it couldn’t happen in the future. Plus many of my closest friends have had babies spend time in the NICU. Every baby deserves a fighting chance and every baby matters!