In case you don’t feel like singing my super awesome racing song to the tune of a Christmas carol, what I’m trying to say is that Springtime races are in full swing. Some are serious. Some are for pure fun! Lots of 5K, 10K and half marathon events flying around left and right. Training is in full force for your goal spring race {hey you can still sign up for Zooma Texas on April 12th 5K, 10K or half marathon. Use code TXAMB1 for 10% off!}, but every once in a while you just need to let loose and have fun! Enter Neon Splash Dash! 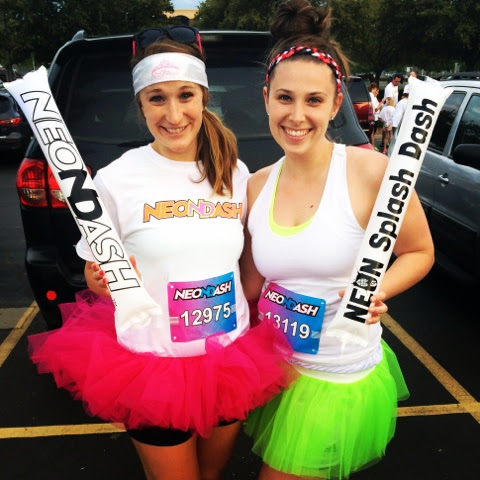 I ran this super fun race with my friends Caitlin from work and my fantastic husband! He’s such a trooper and awesome supporter of the sport I love so much! 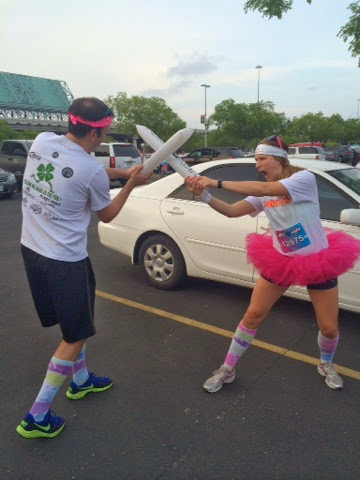 This was Caitlin’s first official race which was an awesome and fun start to her racing career. She’s running her first half marathon at Zooma Texas…you can too!
This was a great first race since it was a fun run. No timing chips, no stressing about how fast to go or checking your watch. Just running, skipping, walking, whatever moving forward, getting blasted with fun glowing color for 3.1 miles followed by a glow in the dark black light party! 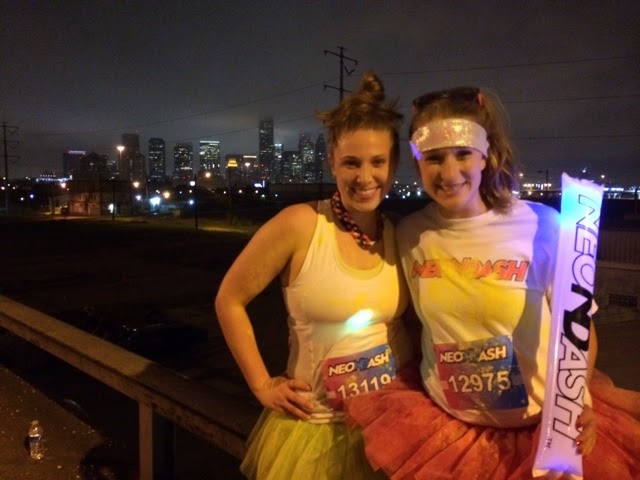 The race was really well organized. We picked our packet up on race day and didn’t have a single problem. We barely even had to wait in line! Parking was super close to the event, so we didn’t have an issue walking back to the car to put up our race packet goodies.
The start line was well organized and we took of in waves. I think the waves were spaced properly, but as always, people have an issue with placing themselves in the proper place in line. They announced runners to the left and walkers to the right. Unfortunately, throughout the race we were dodging all the walkers! Don’t get me wrong, I am so glad the walkers are out there. These races are all about getting people up and moving and doing something different/out of their comfort zone. I just wish that people were more courteous and aware of those around them. End rant. 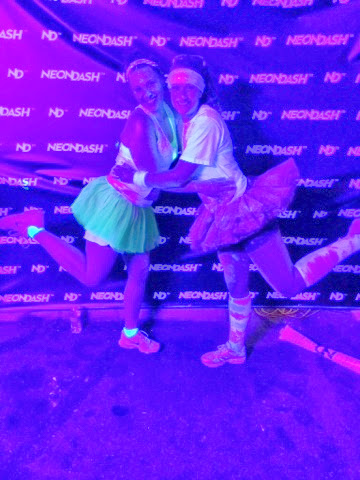 The after party was super fun. We loved the black light photo stations to snap some pics post race! 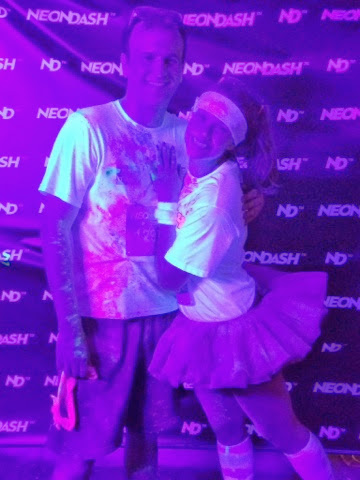 After snapping several shots we jumped in on the dance party where we got even more color. They had water guns of neon paint shooting out into the crowd. JP backed out while Caitlin and I went in full force! After a few minutes, we had to get out though because it got SUPER claustrophobic up in there! I mean, so many people, all wanted to get color blasted, moving in closer and closer. Count me out. Luckily we had to get to an 80’s themed birthday party so we peaced out and went out in Houston in our neon and tutus. Best decision EVER!

Have you done a crazy fun run or would you want to try one?
What kind…color, neon, mud, etc.?