Guess what? I don’t speak French. Not a bit. That did not stop me from going to France though!

So this is a little out of order, but Marseilles was the second city we visited on our trip. In between our crazy day in Rome and Marseilles, we boarded the ship and had an unexpected, rocky at sea day. I figured I’d go into details on that and share all the boat pictures in one post 🙂 Moving on…

We weren’t supposed to get to Marseilles until later in the day, but since we had to miss the Florence port, we arrived early. Being the early riser I am, we were ready to take on the city by 9:00am.

First we took a shuttle to the Marina before we decided to hike up to Notre Dame de la Garde. Now there was also a cute little train that you could take up to the cathedral, but of course, I was set on walking.

Now let me tell you something about this day, though these pictures look gorgeous with bright blue skies and sunshine, but it was one of the windiest days I have ever experienced in my entire life. No joke.

As you can see below, I am holding my jacket closed so it doesn’t look like I’m trying to flash the camera. Do you like my giraffe friend? These animals were all over the marina area of the city. They were called the Silly Zoo and we all decorated differently. 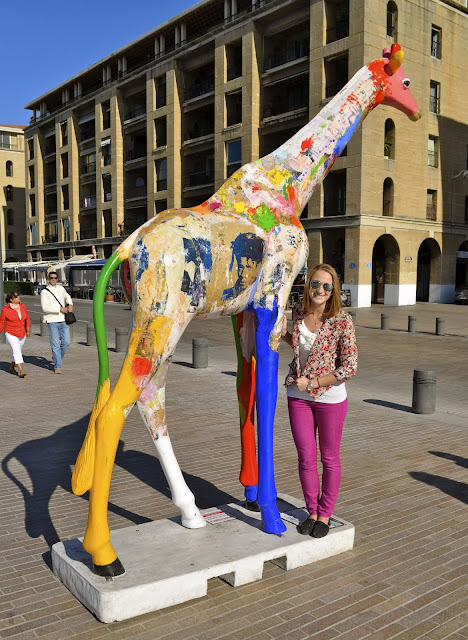 JP got to take a picture with the hippo! He’s such a good sport! 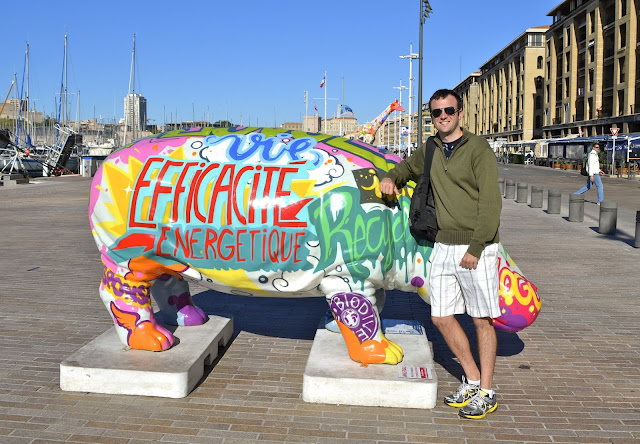 Again below you can see the effects of the wind. Thank goodness for the sunshine though! I am still in awe of the sky and water…SO BLUE! 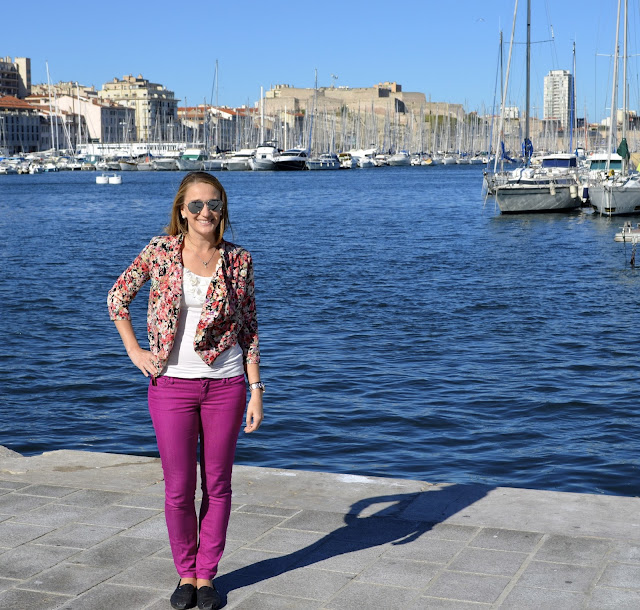 After a few pictures, it was time to begin our hike. We didn’t have a map. We could see the cathedral most of the time and there were some street signs, so we just took off. Maps are generally a good thing to have when you are in a city you don’t know. And by city I mean country. But don’t worry, we made it. It was a bit of a round about way, but that’s okay.

It turned out that we kind of circled around and came up the back. The stairs we took to get down were less creepy and more direct, but that’s okay. I love adventures like this with my hubs! The walk was fun and the stairs were tiring, but the view from the top was simply breathtaking. No editing here folks.

It was even windier at the cathedral, so we were dying to get inside! 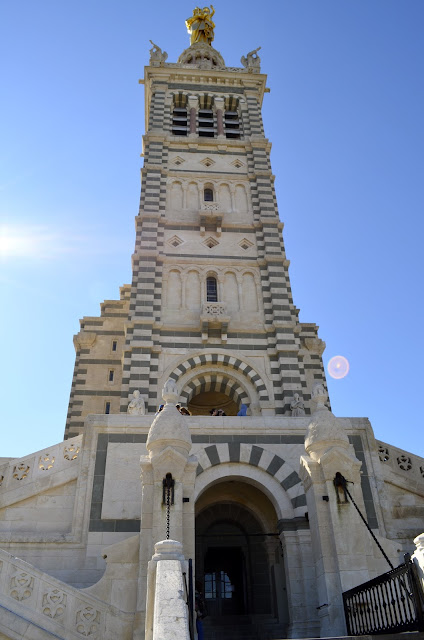 The inside was stunning. So many golds and colors and mosaics. It was built in 1864 and stands nearly 500 feet tall. It was constructed in the same place as an ancient fort that was used to protect the city as it is the highest point in Marseilles. Notre Dame de la Garde actually means Our Lady of the Guard and residents consider the building the protector of the city. 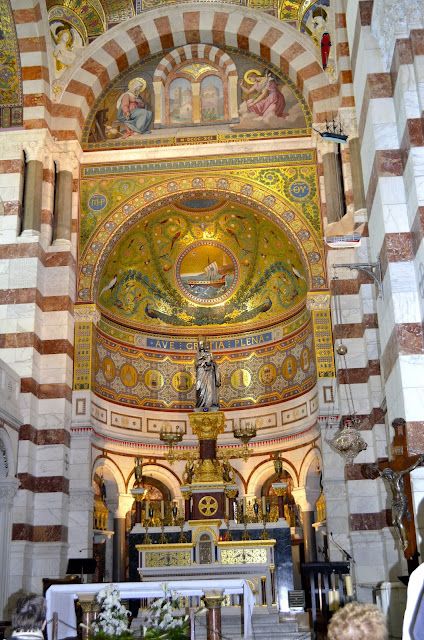 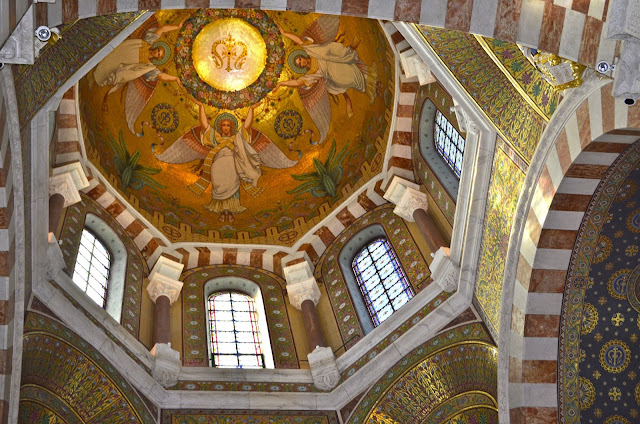 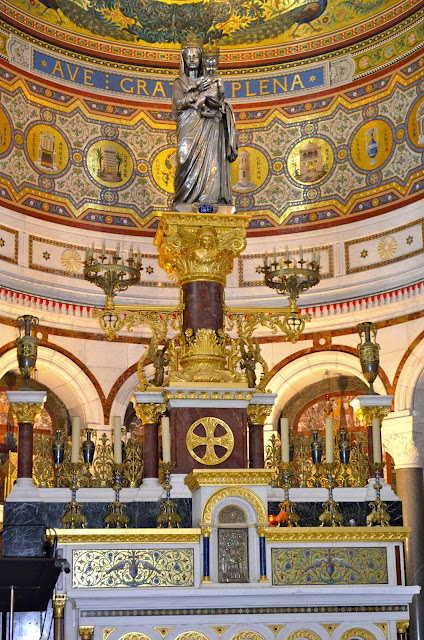 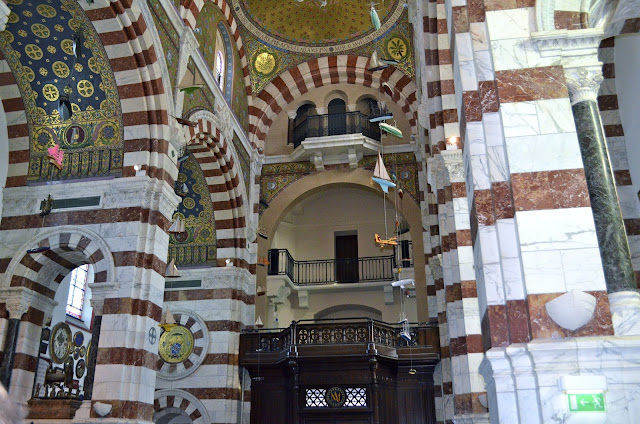 The boats hanging from stings attached to the ceiling were placed there by sailors that were thankful to God for allowing them to return home from their journeys at sea. 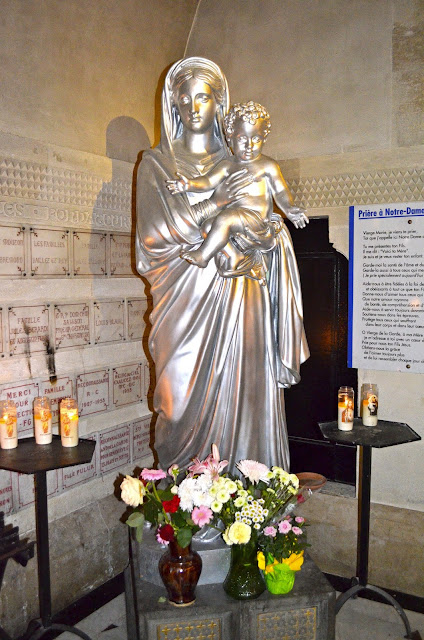 At the top of the cathedral there is a statue of Madonna and Child. She was constructed out of bronze and plated in gold. 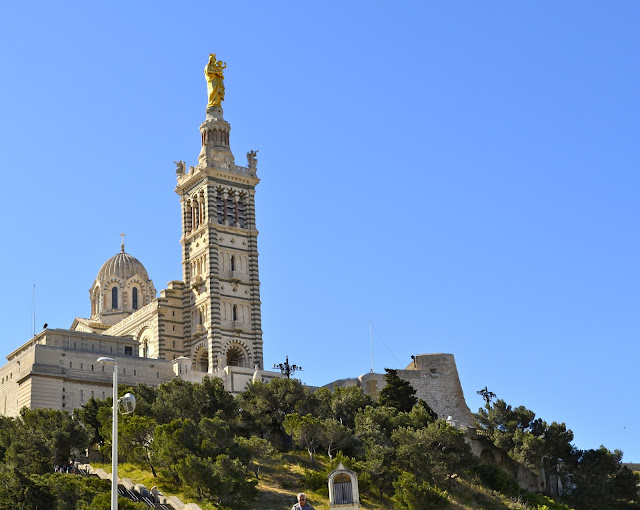 So after our adventure to the highest point in Marseilles, we decided it was time to go shopping. And by we I mean, I decided. Luckily, we got our hands on a map and  we able to find the popular shopping area! 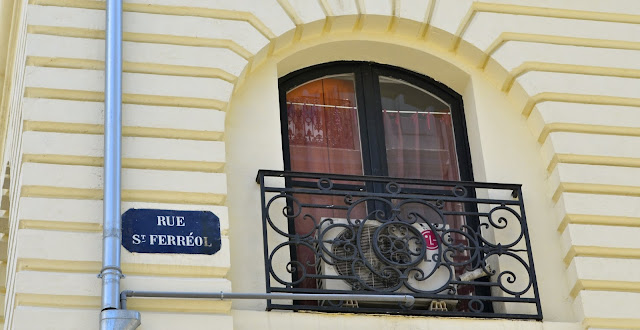 Rue St. Ferreol is a pedestrian street full of TONS of shops! We ended up with a few bags from Zara and H&M. I didn’t want to get too much since I was still counting on shopping in Barcelona!!!

Overall the city was beautiful. One of the first things people ask me is, “Is it clean?!” Yes, it is! The streets were clean, the buildings were big and there were practically no public restrooms. For a girl who drinks A LOT of water, this became a problem. Thank goodness we found a mall because I was about to die 🙂

After hiking and shopping, we worked up an appetite and found a restaurant down by the marina. I was determined to have seafood. Unfortunately, none of the restaurants have English menus and the waiters were kind of rude and not particularly helpful. After scoping out a few places, we found one were we could sit outside. JP and I shared a seafood pizza complete with calamari, muscles, fish, etc.

Once our appetites were appeased we walked around and searched for souvenirs before hopping back on the boat! We were back on the boat and in our bathing suits by about 2:30pm. We attempted to lay out and read, but the wind got the best of us, so we settled for drinks in the hot tub and made a few friends 🙂

So there you have it! Stop number 2 on our Gougler vacay! Up next Palma, Mallorca, Spain!

Have you been to France? Which cities?
What are your favorite touristy things to do?