Usually on Monday’s I tell y’all just how fun my weekend was, I show you lots of pictures and link up with all my friends. However, this weekend was a relaxing weekend for me and the hubs. It was very much needed! There are a few highlights I must share with y’all though. 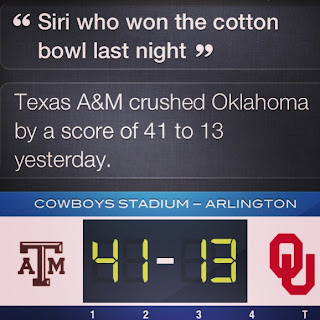 1.) Aggies beat OU and won the Cotton Bowl!!!
2.) Texans beat the Bengals to make it to the next round in the playoffs!
3.) Packers crushed the Vikings to move on in the playoffs! 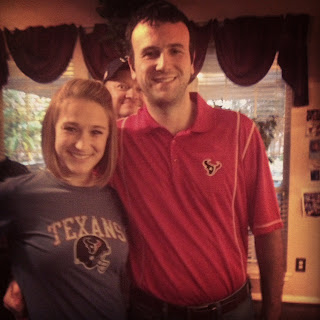 This was clearly a good weekend for football! Well, for me a least.

So instead of telling you about how we sat on various couches at different peoples houses watching football, I’m going to ramble about the fact that I’m actually running a marathon in 6 days. Less than a week.

At some point last year, I decided that I was actually going to take the plunge. Put on my big girl panties and actually run a marathon. Of course, at that point it was just an idea. An idea that turned into sort of reality when I was accepted into the Houston Marathon {there is a lottery system due to the huge number of people who want to run the race}. That was in June of 2012. The race was 7 months away. I didn’t even start training until August. I joined Runner’s High Club in Houston and wouldn’t have done it any other way. So many amazing friendships, awesome people, great support and camaraderie. Even in August the race seemed forever away. Now the big day is almost here and I’m actually running a marathon.

All the hard work, dedication and lifestyle changes I had to make are coming together. In six days, I will conquer ultimate running feat. The marathon. I know there are longer, tougher races out there, but the marathon is the holy grail of running.

Fun Fact I: The term marathon comes from a Greek legend. Pheideppides ran from the Battle of Marathon to Athens to announce that they had defeated the Persians. They say that he ran the entire distance, burst into the assembly hall, announced they had won, then collapsed and died. {Let’s hope that doesn’t happen to anyone next weekend!}

Fun Fact II: The marathon was one of the original Olympic events in 1896. Only 17 competitors ran this distance. The distance was made official and standardized in 1921.

Fun Fact III: Women were not included in marathons officially until the 1960’s. The first woman to “officially” run the Boston Marathon was Katherine Switzer in 1967. She was only able to register due to a fluke in the registration system. Women weren’t allowed to officially enter until 1972!

Fun Fact IV: The first Houston Marathon was in December 1972 and was a 5 mile loop course with a parked car marking the turn. That sounds awful. 5+ loops? No thank you.

Fun Fact V: A 140 pound woman running a 10 minute mile will burn about 2,777 calories during a marathon. Crazy right? And that’s why we get tons of awesome food after the race. That’s my 2nd favorite part. First is crossing the finish line.

Fun Fact VI: The Chevron Houston Marathon has been voted the “fastest winter marathon” and “second fastest marathon overall” by Ultimate Guide to Marathons due to its flat single loop course and over 200,000 spectators cheering on the sideline!

So in case y’all couldn’t tell, I’m a little excited and super anxious. This may be the theme of the week. Don’t worry, I won’t go overboard, but this is a big deal. Race day is less than a week away. It’s really here and reality is sinking in. I am running a marathon. 26.2 miles without stopping. In just 6 days.