WOW…can I just say that I did not even begin to expect Sunday to go the way it did. I am very pleased with my experience and it was FAR better than last year. Reminder: last year it rained the ENTIRE race. It was my worst time EVER and I was miserable afterwards. Continue on to read about my experience this year!

Race Expo: This year’s expo seemed to be in a much tighter space or there were more people. Don’t get me wrong they had all the right booths there and the sales were amazing. {I got a pair of Nike running shorts and a Nike Pro Sport sports bra for $30 total!!!} The entire space just seemed very cramped and it was hard to get around. I really enjoy race expos and like to walk around for quite a while, but for some reason, I felt like I needed to get out of there earlier than I anticipated. Oh well, I got what I needed along with some awesome freebies! 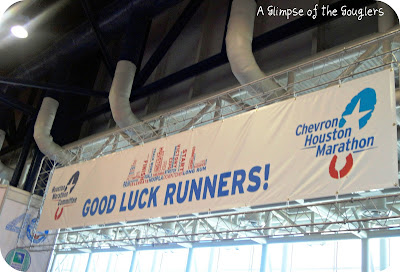 Since the Olympic Marathon Trials were here in Houston the day before the race, there was an Olympic Trials Town outside of George R. Brown at Discovery Green Park. The hubs and I walked around and it was really quite neat to see all of the events and what it takes to compete! 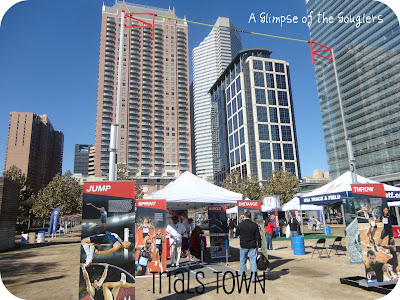 Race Day Set Up: I love that prior to entering your corral you can wait in George R. Brown Convention Center. It nice to be able to stretch and get mentally prepped in the warmth instead of outside. There were plenty of port-a-potties {gross, but yes a necessity!}, but I think they should have advertised that there were more as you walked closer to the corrals. Luckily I decided to chance it and go further instead of waiting in line and found a much shorter line, cleaner pots, and toilet paper!!! Sometimes it’s the little things 🙂 The race also got started without a hitch. It flowed seamlessly from the elite runners onto Corral A {my corral}.

Now before I tell you my time, let’s talk about the crowd! Oh my goodness, the spectators blew me away. By far the best spectator turnout I have ever seen. When it comes down to it, sometimes it is the crowd that keeps you going when you want to stop. You can put your name {or I suppose another name or a nickname} on your bib, and I heard so many people that I didn’t know yelling my name telling me to keep it up. This was especially important towards the end and may have contributed to my increase in pace over mile 12. Aside from hearing my name, my favorite thing about the spectators are their signs! Here are a few of my faves:

All in all, it was a great race and I am still on cloud nine after my performance. I ended up finishing in……….drum roll please……………1:54:22!!! Yippie!!! Okay so maybe not outstanding for some of you super runners out there, but I was darn proud. This is my 2nd fastest race time and I did it without training. Not too shabby. I’m feeling more confident about this whole moving up to play with the big dogs and run a marathon thing. I think I can take it. P.S. I shaved 10 minutes off of my Houston finish time last year which is my WORST half time ever. I blame it on the rain!

Thanks again to everyone that got up early to support the runners!!! It was a great experience with an amazing crowd. I feel so blessed to have been a part of it!

Sorry this post was so wordy, but I had a lot to say and I hope you enjoyed it. As always, let me know if you ever have any questions about running or getting fit! Have you ran any races recently or will you soon?

Don’t forget to enter my give away!!! It’s full of some of my favorite things…a sweaty band, a Lolita wine glass and a $20 Target gift card! Go here to enter!

Today is MOVE IN DAYYY!!! I finally get my belongings and I get to sleep in my own bed for the first time since December 14th! Wish us luck…let’s hope that nothing is broken {crosses fingers}.